One of my new favourite things about having an allotment has been growing flowers, the only worry is that its taking over and soon there won't be any room for vegetables! Its been a real learning curve for me, learning how far to space plants out, which have good long growing season, which are short term stars and some which might not be worth the bother. My allotment is divided up into 7 long thin beds separated by grass or bark chipping paths. I've got 2 main beds which are divided into half and these are my 4 crop rotation beds for my vegetables (Brassicas, onions, legumes and roots). I have one long bed which has mostly fruit bushes and trees and another bed is half full of perennial crops (strawberries, asparagus and artichokes). So that leaves 3 beds which are mostly cleared each winter and I swap around what I want to grow in here each year. So I need space in these beds for potatoes, sweetcorn, courgettes and squash, cucumbers, leeks, lettuce and others. But the last couple of years I've grown lots of annual flowers for cutting. Starting with one long bed, then last year this expanded to one and a half long beds and seeing the list of plants that I want to grow this year I think it might get bigger! I've been a bit more organised in 2015 and sowed some biennials so I already have some Wallflowers, Sweet Rocket and Sweet William in the beds. I've also planted some bulbs, some Tulips and Alliums. Plus I've planted a few perennials which are good for cut flowers. 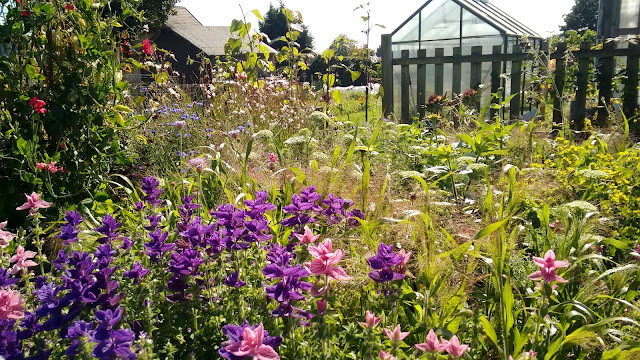 So what have I learnt in 2015, which were the star performers, well there are a few that are just fabulous, flower for a long time, not susceptible to slugs and look great in a vase. Echium 'Blue Bedder' was one of the first plants for flower on my plot and was still going in November, it looked fabulous with sunflowers. 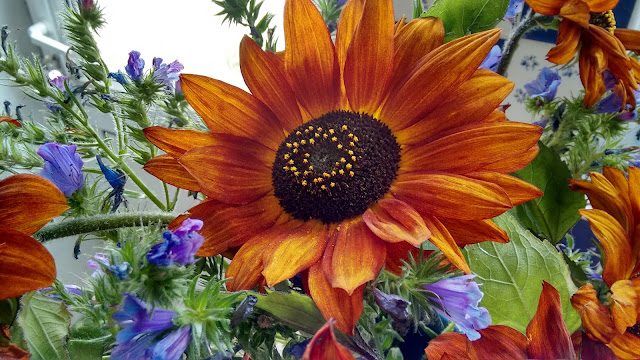 Another great long-lasting performer is Clary 'Bouquet mix', I loved the blue and pink version of this but was a bit disappointed in the white version it never really got going. This flowered for a long time and seems as tough as old boots. The blue variety went well with bright orange marigolds or dark purple cornflowers. The flowers (actually they are coloured bracts) last ages in a vase too. Here it is with Cornflower 'Black Ball' and 'Classic Magic', Amberboa muricata and Nigella (Ignore the toaster. Note to self, learn to take better photos of my arrangements!). 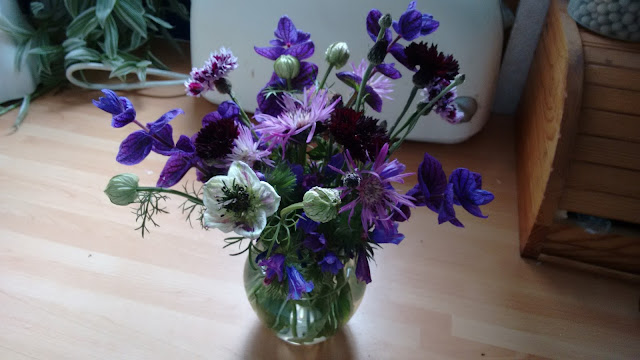 I grew a few varieties of Nigella 'Midnight', 'African Bride' and 'Delft Blue' and the standout variety was 'Delft Blue', such a delicate flower with white petals stained in blue/purple with such dark centres. Here it is with Ammi. However I have found that Nigella plants are quite low growing and you have to be careful who you put them next to, so that they don't get overwhelmed and smothered. 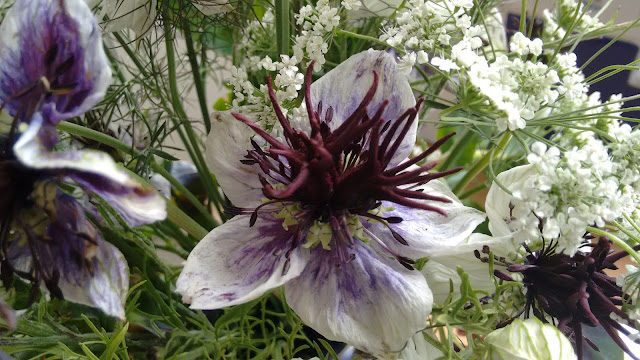 There are a few other annuals that are like that, they are my delicate ones, others include Didiscus and a lovely variety of Gypsophila elegans called 'Kermesina' which was ok initially on my plot but then got overwhelmed by the neighbouring plants. The Didiscus this year, I grew through a lovely airy grass called Panicum elegans 'Frosted Explosion' which I think suited it fine. This is a tricky plant to grow for me, its lovely but the slugs like it too, but its such a gorgeous flower I think I will have to persist. Here is the Didiscus with some other nice pastel shades, from the pink Clary, Daucus carota 'Dara' and the Panicum grass. I loved this grass it made every arrangement fizz. 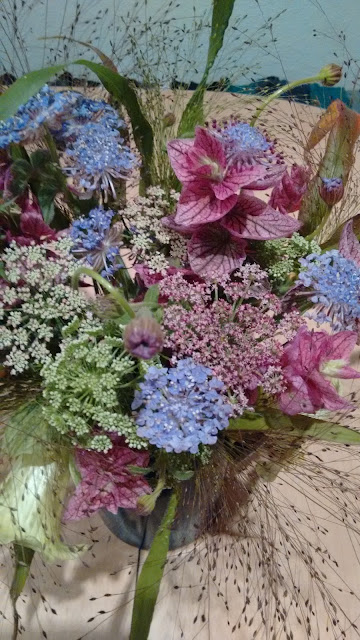 Another great flower was Ammi visnaga 'Casablanca' here in the plot with Zinnias, Burpleurum, Clary and Panicum'. Its a really sturdy plant with ferny foliage and robust white cow parsley-like flower heads. Much better than Ammi majus I found this year. It probably wasn't a great growing season for Zinnias, they like the warmth I think, but I got a few blooms later on from these plants and they are great in a vase, lasting ages. I grew 'Mammoth' and 'Envy'. Not sure I would grow 'Envy' again I expected it to be a zingy acid green colour but it was a bit insipid and grew weakly compared to the vibrantly coloured mix of 'Mammoth'. But maybe it was just the weather conditions. 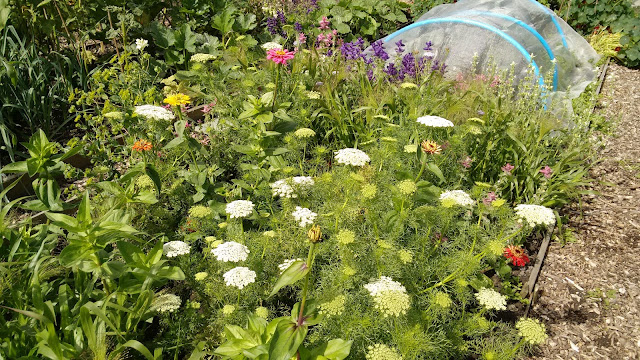 Cosmos was a good robust plant, the varieties I grew were tall and needs space so you need to keep that in mind. I grew 'Purity' the classic white variety, 'Candy Stripe' which is a very jolly white with pink stripes and 'Click Cranberries' which has a lovely dark pink almost double flower.  Here is Cosmos 'Purity' in a nice monochrome arrangement with Ammi visnaga 'Casablanca, Panicum and the lovely black Scabiosa. 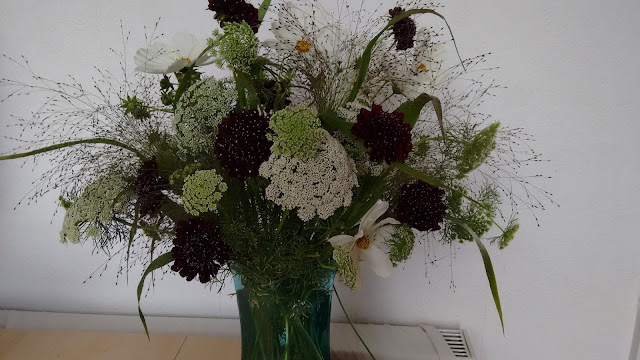 Other varieties that I grew were Cerinthe major 'Purpurescens' which often self-seeds around my plot now, a couple of Calendula varieties 'Touch of Red' and 'Coffee and Cream' and lots of sunflowers. I planted a hedge of them round one side of my cutting patch but might rethink this for next year as it makes it quite hard to cutting the other flowers in that bed! I grew 'Claret', 'Velvet Queen', 'Giant Single', 'Valentine' and a new variety called 'Sparky'. The others I'd grown before and most are great for cutting (though not the 'Giant Single' but just love the cheery flower on this). I didn't like 'Sparky' it has thin quill-like petals, it looked it wasn't quite fully in flower (Sorry I didn't take a photo). Not like this lovely one below. 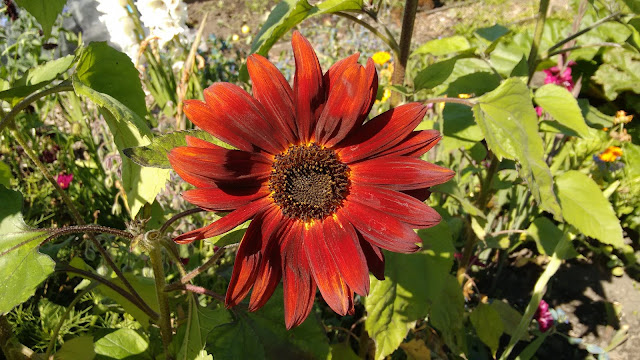 Scabious was another big success, I grew a Black and White seed mixture but loved the really dark ones the best. They look lovely as cutflowers in bud, in flower and as a seed head, how great its that. They have lovely long stalks and last a good time in a vase. I grew some Daucus carota 'Dara' not really expecting it to flower this year, they are supposedly biennial, but I managed to get a few late flowers off those plants. This a gorgeous cow parsley-like flower but with a dark pink tint. I'm hoping they will flower again next year but not sure as this is the first time I've grown them. Amberboa muricata is not particularly well known as a cut flower I don't think but this is a lovely flower. Slug resistant and long-flowering this has pink knapweed-like flowers, which do also last a long time in a vase. Cornflowers are a good early flower, probably need a second sowing to keep them going through the year. I love the variety called 'Black Ball', and the blue one is a classic.

So I've had lots of fun this year, I've still got lots to learn about arranging them, but I love experimenting and especially enjoy the fact that every week you have different bucket full of plants and can discover different combination. The plot has looked so colourful and the bees have loved it too. So excited about growing some new varieties next year.