Thats odd, I don't know how that happened but it seems that an email went out yesterday notifying people of a post that I wrote in July last year. Very odd! So apologies if there was some confusion.

I've been sorting my photos out that I've been taking this year and reflecting on some of the quirky things that have been going on in my garden this year. I decided early on in the year this year that I was going to grow my salad crops in my garden rather than at the allotment where I have a constant battle with slugs and snails. I don't go up frequently enough to keep on top of the problem. I'd bought a couple of new tin containers from Southport flower show last year and also had aquired some very handy mushroom trays and some wooden crates which I though would be the ideal container, once lined, to grow salad crops in. So I sowed some seeds in the greenhouse in modules, potted on a bit and then planted then out into the containers in May. Hardened off and then moved outside and had visions of picking salad crops over the next few weeks. Here they are looking splendid on first planting. 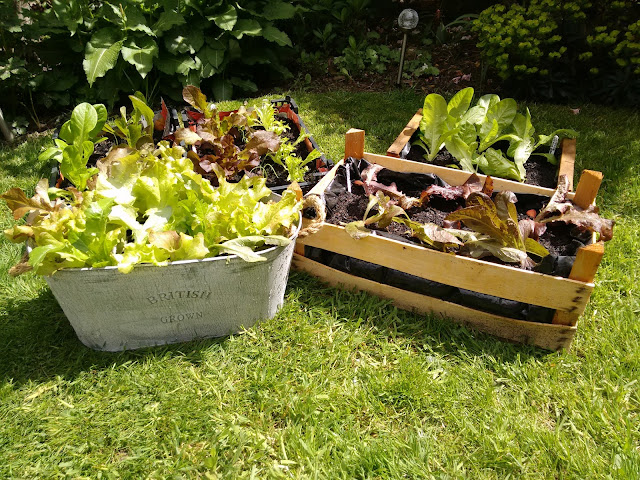 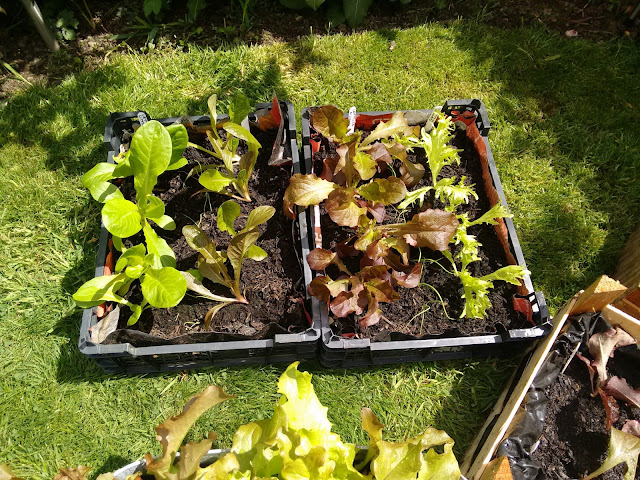 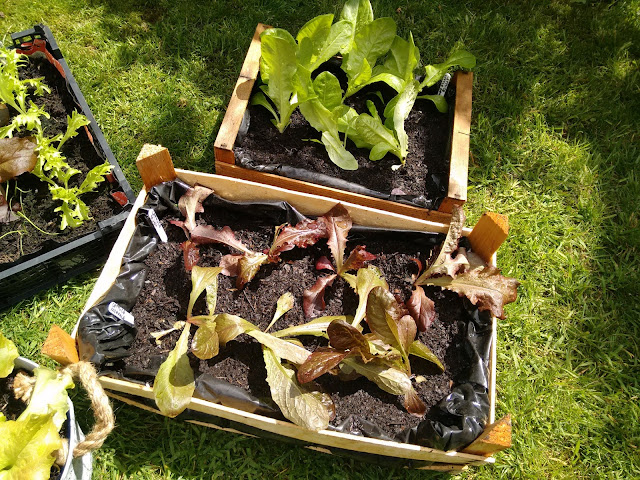 The varieties that I grew were some tried and tested ones which I knew were pretty reliable and a couple of new ones. So there was a variety called 'Bijou' which is a frilly dark red leaves, almost black and I've found in the past less likely to be eaten by slugs. 'Rosedale' a Cos type lettuce with dark-red tinged leaves and green centre, plus 'Little Gem' the classic short cos-type, which I've grown often before. Plus some mixed salad leaves seeds.
Now where to put them to keep them away from the slugs and I had the idea of placing them on my wheelie bins which are inevitable these days in most gardens. Slugs won't get up there I thought. So all well and good and they got going and grew on and I did get some leaves off, but then I noticed that something was nibbling the edges of the leaves. Slugs, I thought, managing to climb up there or had there been some in the compost. I kept an eye on them in the evenings when usually I go round picking off slugs and snails from my plants but no signs.
Now I like to think of myself as quite a natural gardener, I love trying to encourage bees and butterflies onto my plot by planting their favourite flowers. I have a number of bird feeders in my old apple tree to encourage the birds, one of the most common birds in my garden is the house sparrow and I'm pleased with that. Once a common bird but, if you look at the link above according to the RSPB, they are a bird in severe decline and they actually have a red status meaning that they have the highest conservation priority, with the species needing urgent action. They are a noisy lot, flitting around the gardens round here in quite big flocks and when the babies are there sat on the fence quivering away waiting for the parents to feed them I love to watch them. Anyway they congregate in my laurel bushes down the side of the house next to where I put my wheelie bins and often flit away as I walk down to get to the back door. I started to suspect them as my lettuce nibbler but struggled to catch them at it. Until one morning I caught them from the window of my utility room. 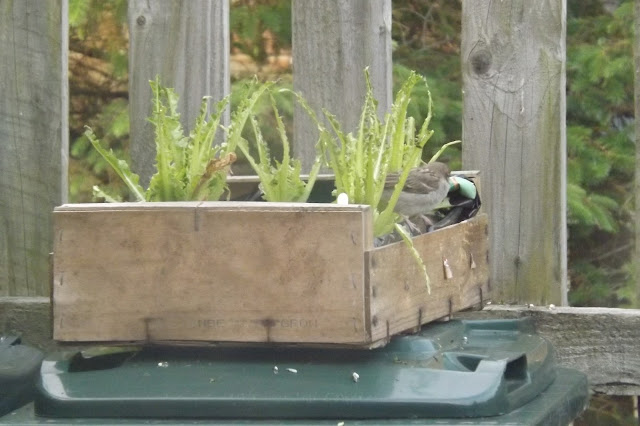 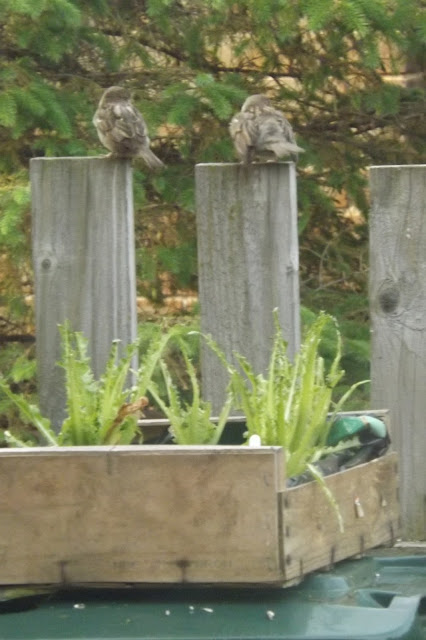 Caught in the act and as you can see the lettuce plants (this is the 'Little Gem') have been  almost demolished. They must love the tender green leaves. They definitely seem discerning about this as they didn't touch the red/black leaved lettuces. So I did get a good harvest off them. So here is a hint to gardeners, they are less often eaten by slugs and birds, do they know something we don't. Less sweet more bitter. I don't know. 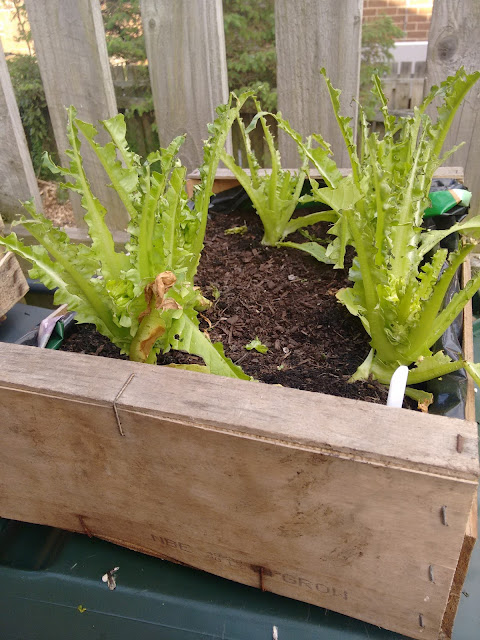 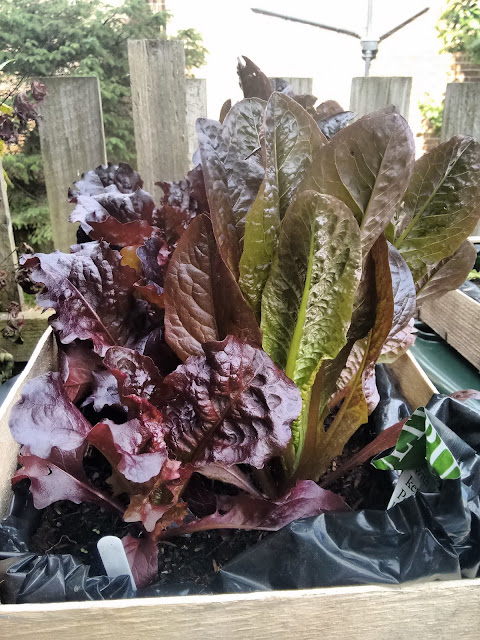 In the end I was very relaxed about it and as you can see I just left them to it. I have noticed the house sparrows quite a few times since flitting amongst by flowers and plants nibbling I think. Could they be picking off bugs, drops of water or pecking the flowers? Probably all three. I'm sure they like the primrose flowers as they are often nibbled. But I'm just pleased to see the house sparrows thriving here and long may it continue.