A cracker of a cut flower

So as the year draws to a close did you know that 2016 was the year of the Cosmos. It always makes me laugh these sorts of titles. The year of..... how do they come up with them all. You might also want to know that 2016 was the year of Pulses. It was also the year of the English Garden, to commemorate the 300th anniversary of 'Capability' Brown. If you look on Google there are lots of other 'Years of'!
But back to the Cosmos and if I wanted to pick a cut flower that was one of the best performers in my cutting patch then you couldn't go far wrong with Cosmos. 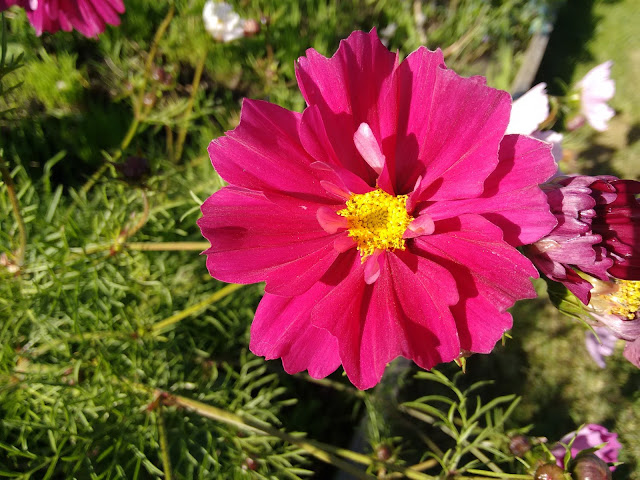 I'm reviewing how my cutting patch has been this year and starting to plan what I'm going to grow next year and the Cosmos has been such a success for the last few years that I wanted to write about it here. They are such long flowering plants, they are quick growing and so start flowering in July and mine went on into late November this year and you can really just keep cutting them and they send up new flowering stems. They are half-hardy annuals and so shouldn't be started too early. In my experience they almost germinate over night and spring up into biggish seedlings in no time at all. So either sow in modules or thinly in seed trays and prick out as soon as you can. You can pinch out the top leaves once big enough to get nice bushy plants. You need to time your seed sowing with your area so that you can harden them off and plant out after the frosts have passed. Another important thing I've learnt is to give them plenty of space as they are big plants and can be a bit bullyish so keep away from more delicate plants in your cutting patch. They prefer a sunny spot as do most annuals. The taller ones could maybe benefit from some support, but mine have tended to support each other. 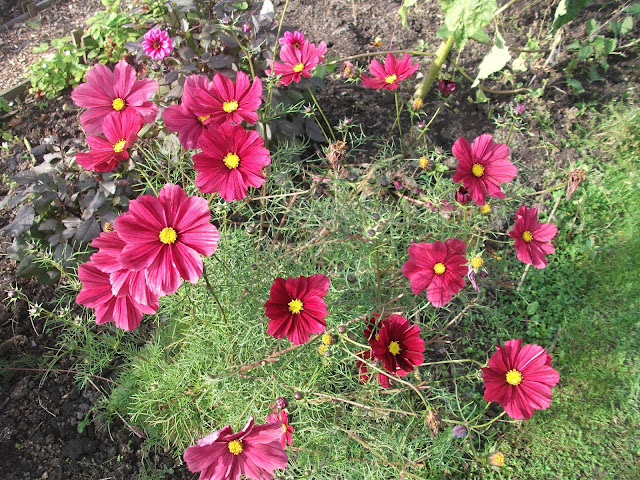 There are so many colours to choose from, from soft pastel shades to dark purples and reds, plus lovely white varieties, such as 'Purity'. You also can get a mix of flower types now, the classic single flower with the large yellow flower centre. The Sensation varieties tend to be taller varieties compared to the Sonata ones, which are often called dwarf varieties. I have to say I prefer the taller ones for the cutting patch but I can imagine the the dwarfer ones would do well in containers as bedding plants.  But then you also get double flowers, Collarette types which have extra frills of petals at the centre, Sea shell type ones which have fluted petals round the central yellow boss and Picotee types which darker edges to the flowers.
As well as having lovely flowers it also has lovely filligree ferny foliage which is a lovely foil for the flowers. 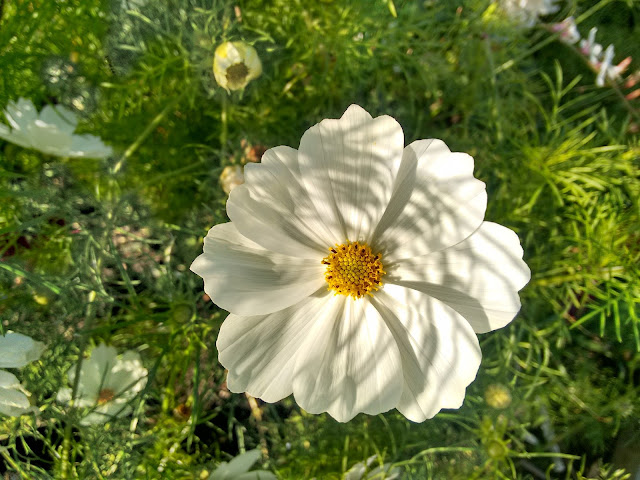 One of the other huge pluses for this flower is that the bees love it too. Sometimes when I'm picking cosmos and walking round the plot I'm followed around by the bees! I have to make sure none are on the flowers before I put them into my car! 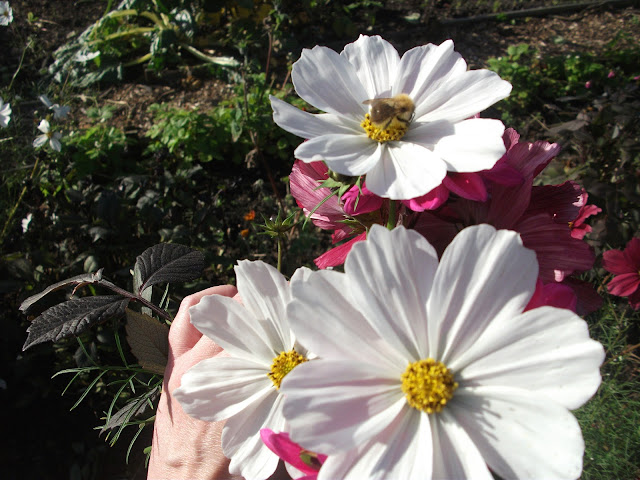 So any negatives?  I honestly can't think of many, the newly planted seedlings can be susceptible to slugs but not as bad as some other annuals in my experience. To reduce the effects of slugs I tend to grow my plants on till they are quite big and then plant them out when they are stronger, more robust plants. But other than that they are not troubled by any other pests of diseases. You need to keep picking them to keep them flowering, oh the hardship of picking these lovely flowers. But I guess if you are not growing them for cutting then you would have to deadhead them regularly.
This year I grew a few different varieties, 'Sensation Mixed', which has tall single flowers, 'Candy Stripe' which has pale pink flowers with a darker pink edge, 'Purity' the classic white flowered Cosmos and 'Click Cranberries' which has dark carmine pink flowers and sort of semi-double flowers. I've also in the past grown a vibrant orange variety called 'Diablo' which was less good for cutting but was great in the garden. I'm looking at new varieties to try this year, Chiltern seeds in their preview catalogue have a lovely semi-double white flowered Cosmos called 'Fizzy White' which has white frills round the yellow centre. A pale pink delicate looking flower called 'Cosimo Collarette'. Plants of Distinction have a variety called 'Antiquity' which is a deep red/pink with a darker coloured red going down to the centre. There is also an unusual yellow variety called 'Xanthos' which I was introduced to by Flighty on his blog, which I definitely mean to try.
They combine well here with Dahlias, Feverfew and Scabious, but I've also combined it well with Clary sage, Ammi, Cornflowers and Nigella. Its a real star of any bouquet. 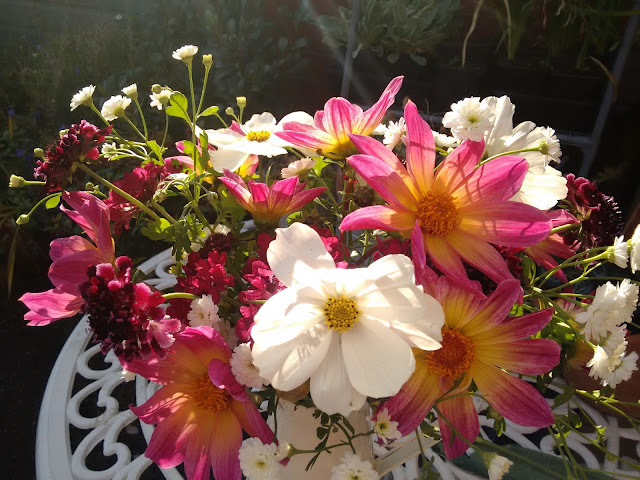 So there you are get growing them I urge you, they are easy from seed, long-flowering, lovely foliage, nice long stems for cutting. So if you are starting to plan your seed orders for next year then I'd definitely recommend them. Good seed suppliers of Cosmos varieties include Plants of Distinction, Chiltern seeds, Higgeldy Garden and Sarah Raven.