My friend Tracy and I visited the Chelsea Flower Show again this year. We have been before but the last time was in 2006, its a bit expensive to go every year. This year we decided to just get a half day ticket for the thursday. We got the train down in the morning and having dropped our bags off at the hotel on the way headed on the tube to Sloane Square. Past the lovely red brick villas to the grounds of the Royal Hospital. It was a bit grey but we were just walking up to get in the queue when there were a few drops of rain and before we even had chance to get coats on and umbrellas up the heavens opened. It was unbelievable heavy rain bouncing up from the pavements so that we were drenched before we had even got in! Our jeans were soaked to our knees!
Luckily it wasn't cold and it stopped raining enough for us to get in and start looking at the Show gardens.
Much as I love the BBC coverage they do seem to have their favourite gardens which they show alot of and others which don't get any coverage at all. So of course the garden designed by Diarmuid Gavin was featured nearly every night, whilst the garden by Bunny Guinness was hardly shown.
As it was thursday we knew who had what medals and best in show, but we decided to look at them with an open mind and make our own decisions on our favourite gardens. It was drizzling a bit when we were looking round but sometimes I think you can get better pictures than if it was bright sunshine which can washout your photos.
There are three types of gardens to view. There are the main show garden which are the largest and most varied. There are the Artisan gardens, which are in Ranelagh Gardens, for these designers have been asked to use an artisan approach to designing, building and choosing materials for the gardens. Then there are the urban gardens where the designers are asked to find solutions to restrictions in space found in urban gardens.
The first garden that you get to on Main avenue is the M&G garden by Bunny Guinness. This is a modern vegetable garden, with a mixture of vegetables and flowers all very colour coordinated. 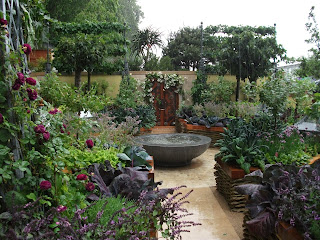 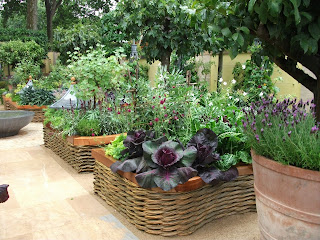 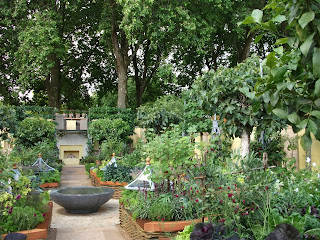 Surprisingly for me this garden only got a silver-gilt medal, they said that it got knocked down due to the practicality of the garden in that it was all packed a bit too tightly and not much space between the beds.
The Monaco Garden by Sarah Eberle. 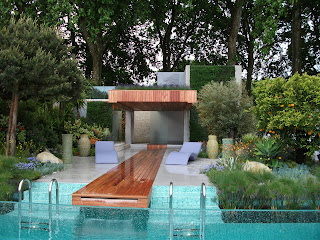 Bit too sleek for me!
I loved the RBC New Wild Garden by Nigel Dunnett. 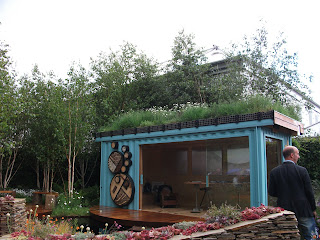 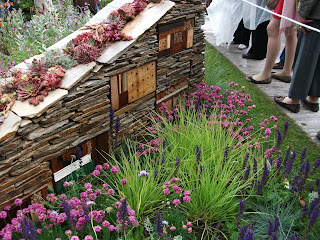 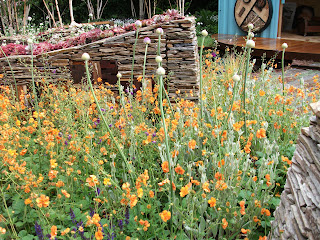 I love the orange geums in this garden which are in lots of gardens and displays across Chelsea.
In fact there were quite a few gardens which had these shelters for insects, but I think they look very structural in this garden.
The Laurent-Perrier Garden designed by Luciano Giubbilei was my favourite garden in terms of the planting.
It was gorgeous, romantic and very frothy in muted colours of maroon, bronze and soft pinks. 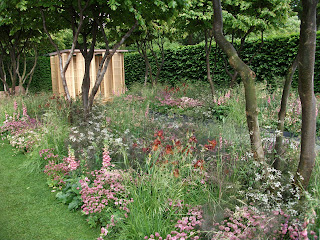 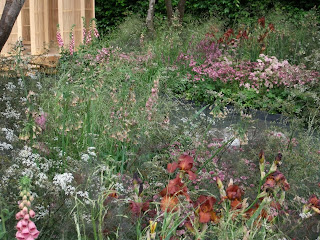 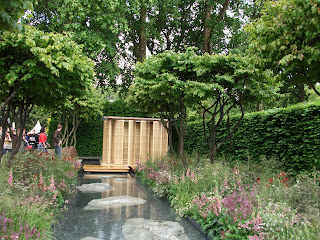 This is definitely a colour scheme that I'm going to try out in my back garden. I already have lots of foxgloves and the Nectaroscordum, allium like bulbs. But I loved the Verbascums and the Anthriscus sylvestris 'Ravenswing', I've made a note of these for the future. the overall garden though, I didn't really take to. I didn't really like the garden house or the pool so overall didn't love the whole garden. But I think that was the same for me for most of the gardens, there wasn't one garden which I loved all the elements of. It was little bits of each one that I liked.
The garden which won best in show was the Daily Telegraph garden designed by Cleve West. 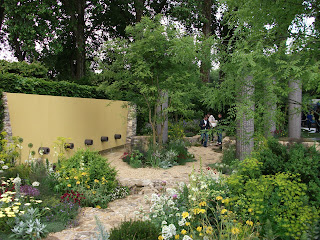 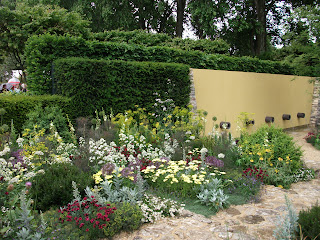 Again this was a lovely garden and I can see why it won best in show, the planting was lovely and I liked the yellow walls and the colours all complimented each other.
A garden which again didn't get much coverage was the Tourism Malaysia Garden designed by David Cubero and James Wong. This was an amazing garden, very different from the other gardens with dense foliage and tropical planting. The sunken seated area was lush and next to a waterfall. A garden of another place but expertly created at Chelsea. 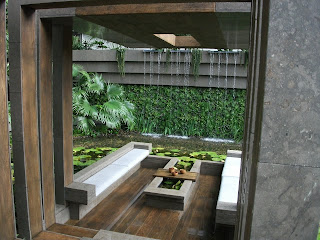 The B&Q garden was a totally edible garden with a very tall structure with planting and integrated watering system. Here again were the insect habitats, this time all created by school children. I really liked the pleached lime trees. But is was more like a garden space rather than a garden, which I guess was the plan. 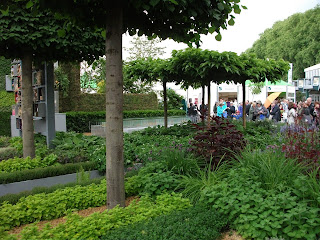 The Trailfinders Australian Garden by Flemings nursery was inspired by the plant hunters who travelled to the Southern hemisphere in search of new plants. 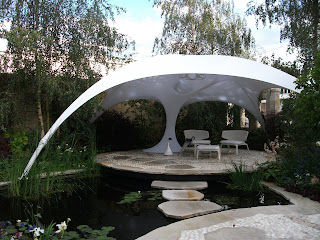 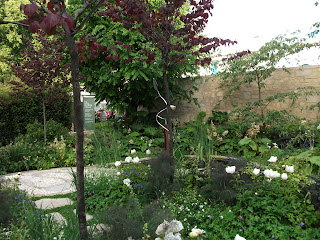 So these were my favourites of the Show gardens, there were others which I liked like Ann-Marie Powell's green and red garden for the British Heart Foundation which actually I felt was the most innovative of the gardens and I was surprised that she only got a silver medal. I didn't take a picture but it was a very lush green foliage garden with red arching structures and red oval blocks as a path. It wasn't a garden which I'd like at home but it was a great show garden and very vibrant. I just thought maybe there whould have been a few more splashes of red in the planting scheme rather than just the green foliage.
I again didn't get a picture of Diarmuid Gavin's garden as it was a garden which I think probably looked its best within the garden rather than looking at it from the outside. Or from above in the floating pod called the Wonkavator. Bit too gimmicky for me but he got his gold medal at last.
I think overall my favourite garden was the modern potager by Bunny Guinness, I guess this is the garden I'd most like at home. But I often prefer the smaller gardens which I'll talk about in my next blog.
Posted by Annie_H at 13:01