Well the snow has gone, didn't last much longer than a day but it was a surprise and caused much disruption on the Yorkshire roads.
This is a picture taken as the snow was going, when the sun came out. 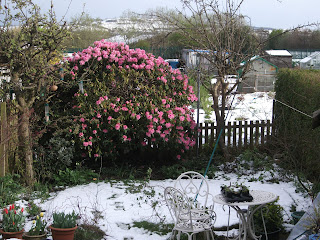 You can see that the rhododendron at the bottom of my garden is in full bloom now, well not quite, weirdly there is a stripe across the middle which is not flowering yet, not sure what is going on there.

So the long Easter weekend has bought grey skies and cool winds but at least it has been mostly dry here in Huddersfield apart from some drizzle in the air. Have been doing some useful jobs at the allotment, I've put a structure up for my first sowing of peas. I sowed pea 'Meteor' and 'Purple podded' on the 7th March and placed them in the mini-greenhouse. They all germinated and I've been hardening them off this week. Normally I grow my peas up a structure made from bamboo canes and pea netting but it always drives me mad putting that up, getting tangled up and last year it didn't feel very sturdy and collapsed a bit. So this year I have made a more substantial structure, still from bamboo canes but strung together with twine and taller than normal. Took a while to do but much less fiddly and I think it looks better than the bright green plastic pea netting. 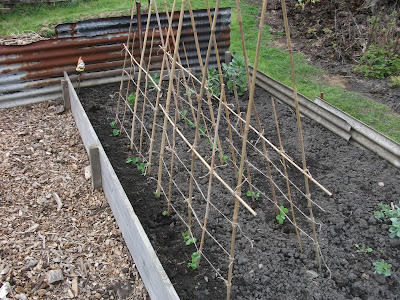 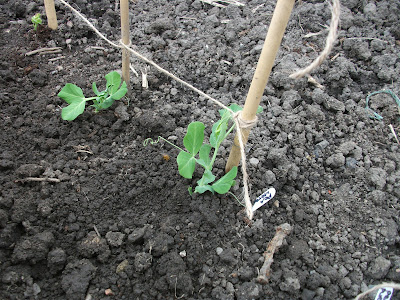 I know some people say that peas are so cheap and easy to buy frozen, but for me, they are one crop I always make room for as I love the taste of peas straight from the pod. Its always exciting when the first plants of the new season go in.
My broad beans that I sowed in autumn are flowering now so it shouldn't be long before some beans appear. 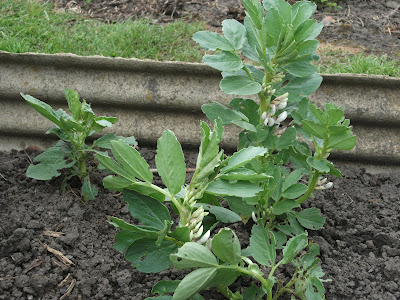 I also planted my potatoes. They were all ready and chitted. 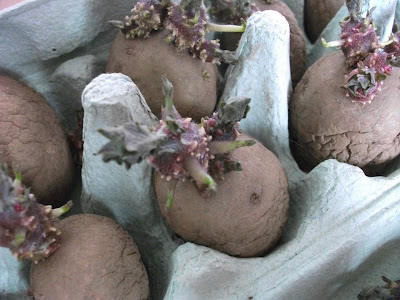 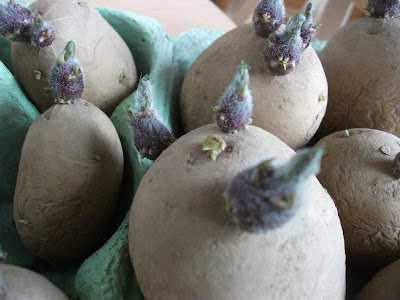 The varieties I've gone for this year are Pentland Javelin (first early) and Cara (maincrop). In the post that I wrote when I received the seed potatoes in the post I discussed the varieties that I had grown last year, one of which was Vales Emerald. I hadn't enjoyed the taste or texture of this variety and they had broken up on cooking. This was mentioned on Gardeners World on Friday when Monty Don was planting his potatoes. He noticed that some of the varieties that he had grown had done the same and that though he'd blamed the variety at first and was going to do a potato trial this year. It turns out lots of people had this problem and that the weather conditions in late spring into summer last year were to blame. We had a very cold May and June and it was proposed that this had an effect on the structure of the potato. So maybe I was a bit hasty at giving up on Vales Emerald as it was a very healthy and clean crop. Maybe I'll try it again next year.
I've planted my spuds at the bottom of my plot in ground that I didn't use last year but I have given it a good dig over and added plenty of compost. We'll have to see how they do. You can see its still a bit weedy on one side! But I'm planning on putting some proper paths in, in the next week or two, all being well so will sort that weed out. 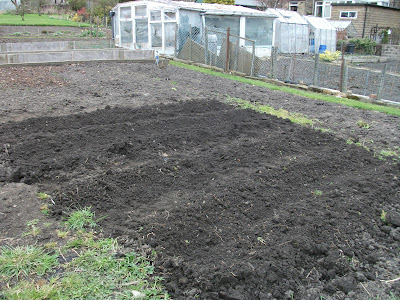 So a useful day at the plot today.
By the way talking about Gardeners World, is it just me or is anyone else loving the many appearances of Nigel the dog! He's the real star of the show....
Posted by Annie_H at 19:51