At my allotment site we have recently set up a committee to try and address issues on the site, to combine resources such as buying seeds and compost and also to get together to work on communal areas of the site. We have been meeting for about a year now and for me it's been nice, as I'm fairly new to the plot, to help me get to know the other plot holders.
We have created our own little shop, have set up a website and reinstated a mini-show of our produce. It used to be a big annual event in Paddock but as allotment usage dwindled it got dropped but now our site is thriving again with all plots taken and the council are relatively on top of people who don't look after their plots. All our work to improve the site has been recognised by the local council and the big show in Huddersfield where our site was awarded the most improved site in the Kirklees region. 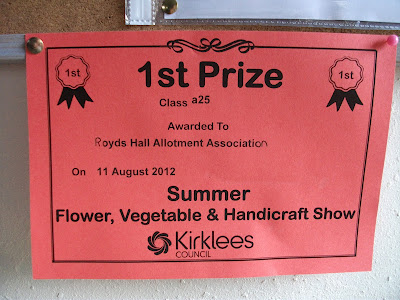 In addition one of our plot holders was awarded the prize for best novice gardener across Kirklees.
At a meeting early in the year we decided we'd like to have our own show but we wanted to start slowly to see how much interest that we would have and if it was a success that we might extend to other sites in the area in future years. As this has been such a difficult year we decided a few weeks ago to have a general  entry which is a basket of mixed produce of your choice (the term basket could be loosely interpreted as any container or if preferred produce can be displayed on the table top which will be covered with cloth). First prize was a memorial shield with certificates for second and third prizes.
The show was to be held on Sunday 19th August in our communal hut on the site. We had a Kirklees official judge, Roy Jackson and we had to exhibit our produce between 6 and 7p.m. on 18th August or between 11a.m. and 12 noon on 19th August. Judging to place at 1.00 and then we all in the hut for tea and cakes at 1.30.
Here was my entry. 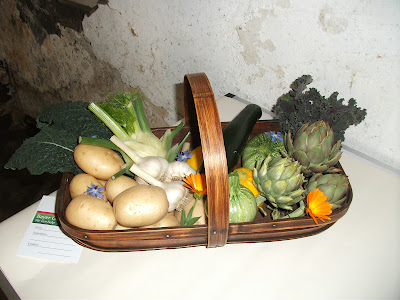 It really has been difficult, I've no beans or peas ready at the moment (my first sowing of peas is finished and my second just starting to flower now!) I've not grown runner beans this year and my dwarf beans and purple beans not quite ready yet! So my exhibit consisted of some potatoes 'Pentland Javelin', my garlic which I'm really pleased with, one fennel bulb, 3 varieties of courgette ('Best of British', 'Summer Ball' and 'Tondo di Toscana') these add a bit of colour and 3 globe artichokes and just to decorate some 'Carvelo Nero' and 'Scarlet' Kale. I'm not sure the edible flowers of Borage and Marigold were approved of by the judge but it added some colour! I was pleased but as you will see below the competition was fierce. It was funny at the allotment on sunday morning picking the last few things and seeing people looking at around at what everyone else was doing! For me it was a bit of fun to get involved and meet my fellow plot holders, but it obviously meant alot more to some of the male plot holders as it sparked their competitive spirit.
So here are a few of the other exhibits. 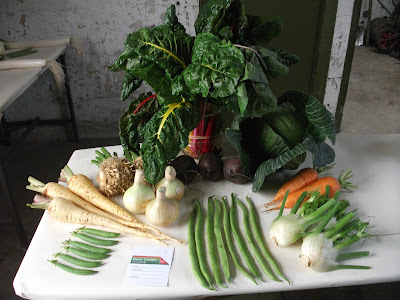 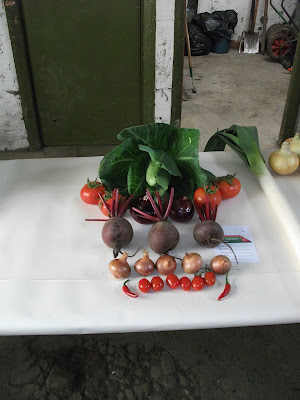 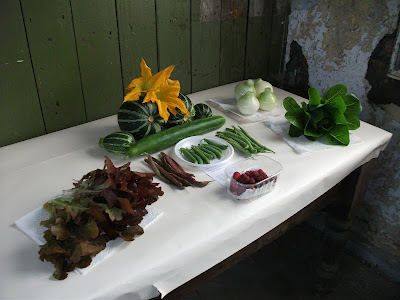 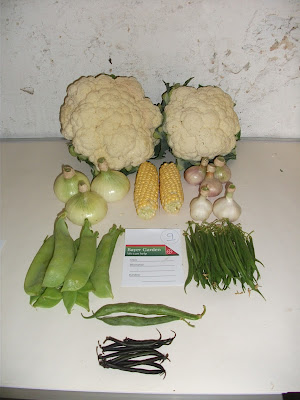 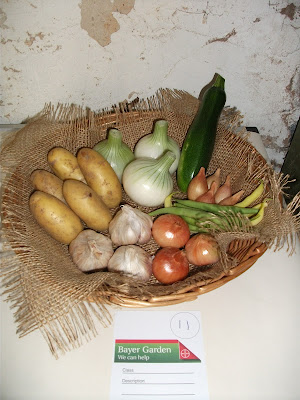 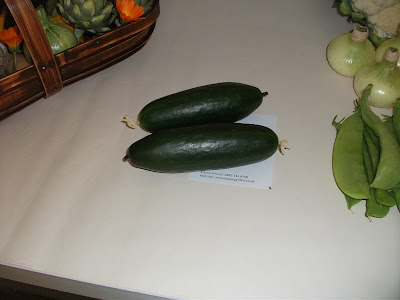 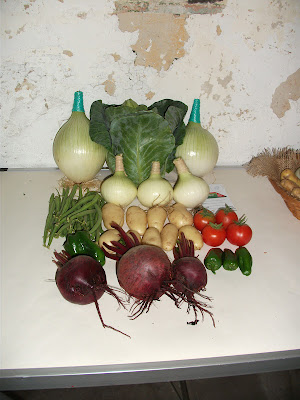 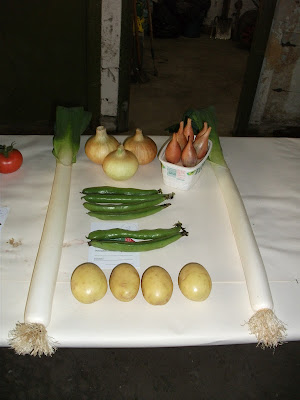 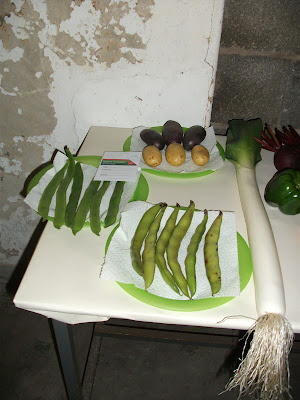 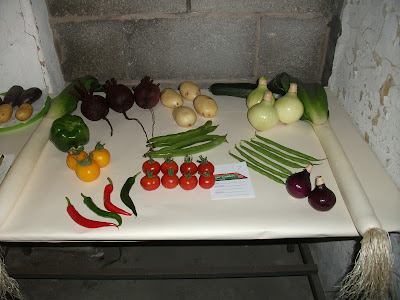 Its an amazing display considering the year that we have had.
Can you guess from looking at them which one first prize?
The winner of the first prize and the memorial shield was our chairman, Barry. Who exhibited the vegetables in the picture straight above. The second prize went to Peter, the first picture above and the third prize to Johnathan the one with the two cauliflowers (which to be fair are brilliant) I've never managed to grow a cauliflower. This won the Haighe trophy for best in show. 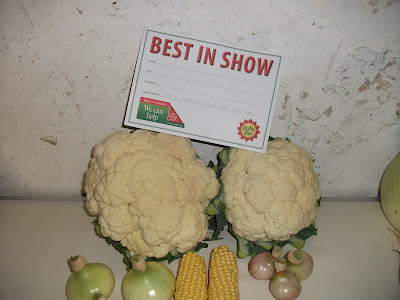 But I'm sorry boys size isn't every thing! There was a definite gender divide in the show, the women more interested in having a good harvest and a tasty crop. Maybe we should all strive for perfection but then I think of the amazing mis-shapen tomatoes and peppers that you see in markets in Spain or Italy where they are really more interested in taste, rather than the uniform fruit and vegetables that you see in the supermarket in the UK. Anyway it was a fun sociable afternoon with lots of talk of the weather and pesky snails. Plus lots of lovely cake.
What do other people think about these vegetable shows?