I'm sure that you are all a bit bored of Chelsea now, or have completely passed it by, but with everything else that has been going on I'm so behind in my blogging but I like to write up about my visit for my own memories so I hope you'll indulge me. It was the 100th year of the Chelsea Flower Show this year so was one to catch. I try and get down to visit as often as I can and nearly didn't make it this year but had a lovely day trip with my friend Tracy. We are in our element, a nice catch up of news on the train down, time for a relaxing lunch in Carluccios and then to the show for 3.30 entry. Then leave there at 7ish once we can walk round no more and catch the train back home. A long day but a great one and a much needed break.
First we aim for the small artisan gardens which are normally a bit quieter but I think everyone had the same idea this year and it was packed.
The first garden is highlighting the work of the charity WaterAid.
Awash with the cheery orange of marigolds. 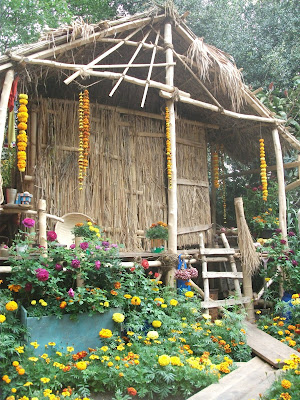 Being an honarary Yorkshire lass, may take me longer than 6 years to get accepted fully, I was intrigued by the Welcome to Yorkshire garden celebrating the exciting news that Yorkshire will be hosting the Grand Depart of the Tour de France. The water feature at the front of the garden is highlighting all the towns that the tour will go through. So a quick skim through and there was Huddersfield! 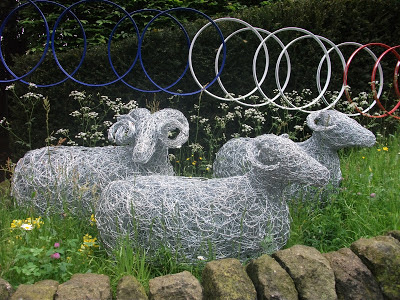 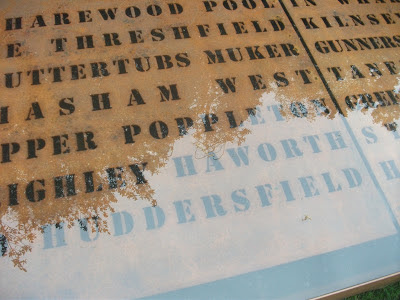 I was quite surprised to find that this garden won the peoples choice for the best small garden.
Moving onto the Walker's Pine Cottage Garden, which I really liked especially the planting, this is my sort of thing lots of alliums, aquilegias and geums. 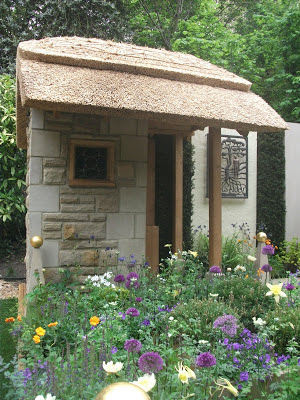 Not sure about the gold finials but I did like the cloud-pruned pine topiary. 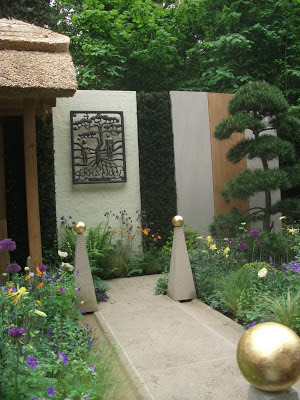 The Un Garreg Garden, meaning One Stone, was designed by two brothers from Brecon in Wales and was another garden with a gorgeous dry stone wall, there were a few around this year. There was a lovely oak bench very natural placed between two rocks, the planting was very naturalistic.
A lovely whimsical garden chock full of nostalgia was next, filled with old toys, a nice detail of the conkers on strings and the type of tree house you dream about as a child. 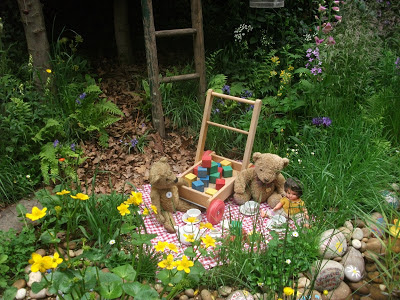 It had a gorgeous shrub which I had to search for when I got home, I knew it was a type of Viburnum and just googled Viburnum pom pom and there it was, the proper name is Viburnum opulus 'Roseum'. There was also one in the Roger Platt show garden on Main Avenue. Think I may have to get one of them! 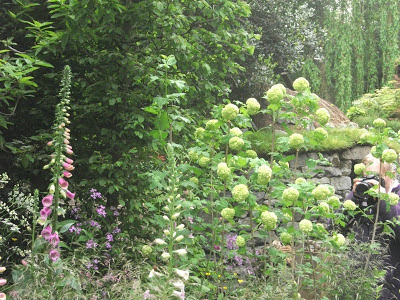 The Hebridean Weaver's Garden was based on a traditional blackhouse on Lewis which is in the Outer Hebrides, the weavers make the Tweed cloth dyed with plants grown in the garden. 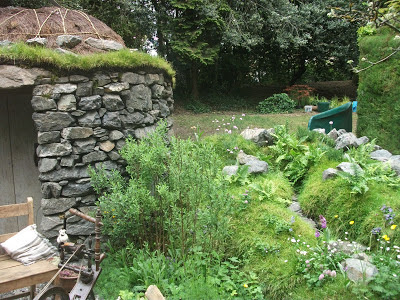 A really popular garden was next, it was almost impossible to get close enough to get a decent photo and I only managed one. 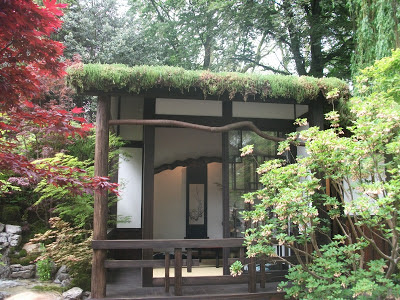 This is the exquisite tea house. Kazuyuki Ishihara is a popular designer of the Japanese gardens at Chelsea and his enthusiasm is so infectious when you see him so excited to get his gold medal as well as best small garden from the RHS judges.
Another dry stone wall was found in the next garden called Get Well Soon and a modern take on an apothecary's garden with lots of medicinal plants. A quirky feature was the pebble path which is supposed to walked on with your bare feet so that it can give you a reflexology massage. 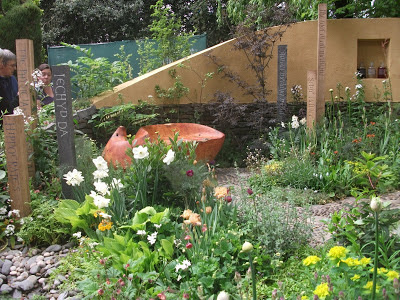 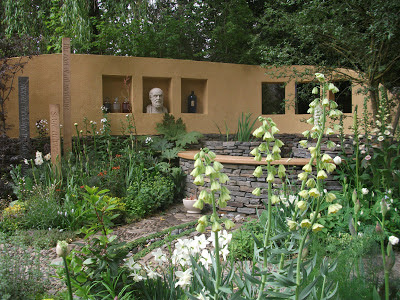 So there is a quick tour of the more traditional small gardens, there is also a second category of small gardens which are the Fresh gardens. These tend to have more off the wall designs. Here are a few, we first found Chris Beardshaw being given a tour of the Massachusetts Garden, which is inspired by the poet Emily Dickinson. I did like the leather panels on the wall that were appliqued with common garden flowers. 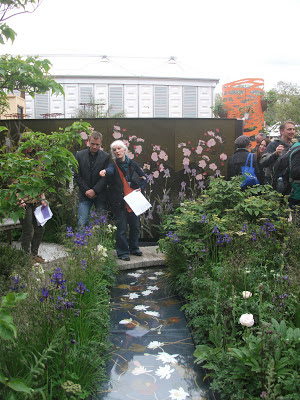 The Digital Capabilities garden attracted a lot of media attention as it was an interactive garden in that it responded to online social media activity. The plot was divided into two diagonally by a white panelled screen. Every time anyone tweeted #RHSChelsea then one of panels opened letting you get a glimpse of the garden on the other side. I actually really liked the planting on the outside with some gorgeous dusky apricot Verbascums. 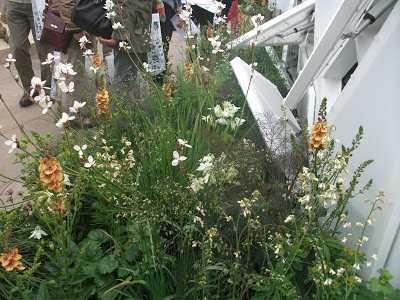 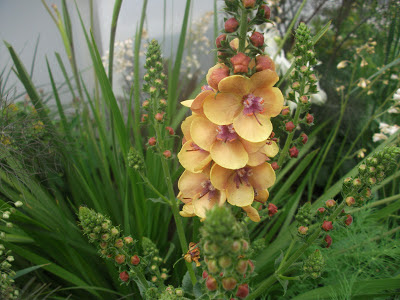 Inside was more tropical planting. 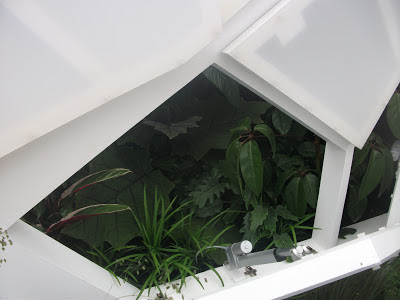 But my favourite Fresh garden was The Mindfulness Garden, designed to suggest the chaos of our busy lives where we should make time for quiet contemplation. The planting was inspired by a Jackson Pollock splash painting with dots of colour all round. 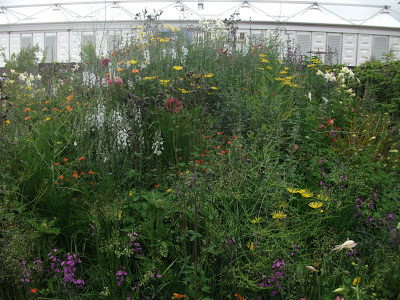 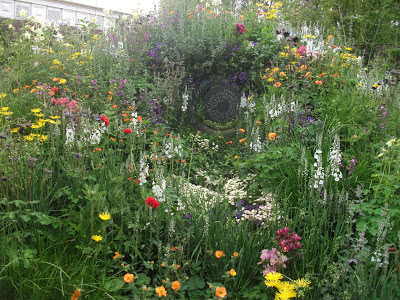 Again some of my favourite flowers, Poppies, Veronica, Geums, Aquilegias and Erysimum 'Bowles Mauve'. A zingy mass of flowers going against all the rules of planting in drifts this was just a jumble but for me it worked.
So there is my tour of the small gardens, I'll focus on the main show gardens in the next post.