Where has this year gone to, I can't believe its the 6th month already, its all been a bit of a blur. We had a stunted spring and this week we seem to have rushed into summer with some glorious sunshine and some welcomed warmth. The late cool spring has had some benefits the blossom has been glorious and the bulbs have flowered for ages, my tulips have been out for nearly a month and are only just going over now. I think that has been because it has been quite constant weather,  and probably when you think about it, quite good growing weather, with some rain, a few dry days but quite a steady temperature. Though we remember the cold dull summer, my feeling is that one of the worst things that happened last year was the abnormally warm and dry March which was followed by some snow and frosts which started plants off into growth too early and then cut them down. The blossom suffered the most, this year though the blossom has been glorious, even on the ornamental trees. I've got two quite old apple trees in my garden and one is pretty scraggly now but even that one has flowered well this year. At my allotment last year I planted a dwarf apple tree 'James Grieve' and it has blossomed well this year so I'm hoping for my first crop later in the summer. 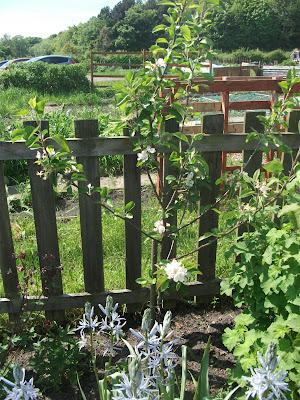 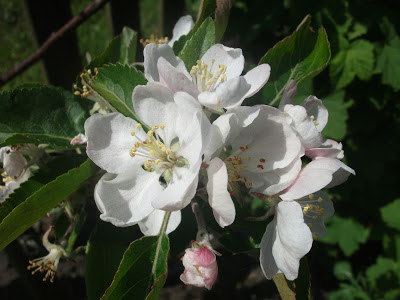 I don't want to say it too loudly as this weather may not last and we may have another cold wet summer but so far things are growing well at the allotment, I'm really pleased. Not sure whether that is due to the better weather or the fact that I've smothered my plot in masses of well-rotted manure this year and my plants are noticeably more healthy looking and seem to be getting growing quicker after planting out. 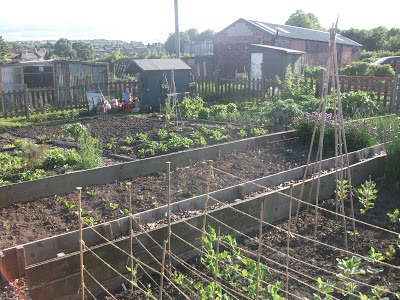 So here's an update. Most importantly I've now got my bench at the allotment. Though so far its not got much use, the odd breather but as soon as I sit down I notice something else I was going to do and up I get! It does need a sand down and a re-paint. Its my old one from my garden. I've put a couple of hanging baskets either side with some strawberry plants and I hope I'll be nibbling some of them soon. 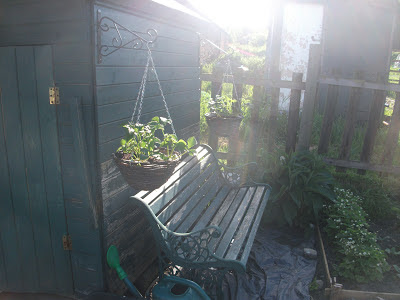 So from the top of the allotment down, starting with the two long raised beds. In the brassica bed I've planted some Calabrese 'Marathon', Broccoli 'Romanesco' and Cauliflower 'All the year round'. This is my first attempt at growing cauliflower so we'll have to see how it goes. 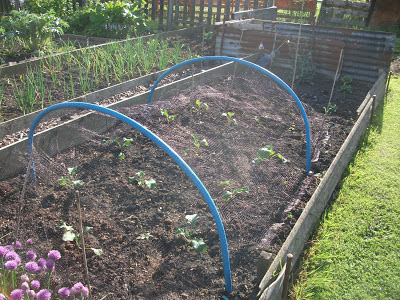 I acquired some blue piping which is much better in covering the plants with netting to stop the pigeons which are a real problem on this site, but it was just a bit left over from a job at the local cricket club so need to get some more.
My bed dividers, the chives are looking fab and the butterflies are appreciating them. 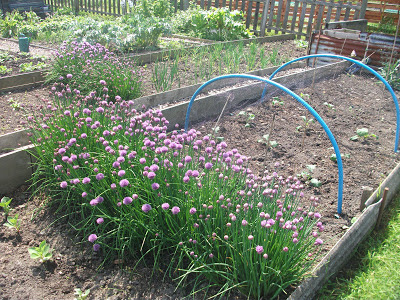 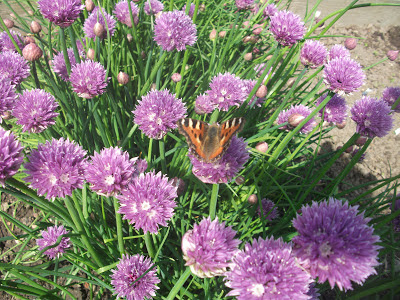 Further along this bed are the legumes, I sowed some peas direct into the soil and they took so long to come up that I'd also sowed some more in modules which I planted in between the direct sown rows, but then they all came up so I've got 4 rows of peas, strictly probably too close. But so far doing OK. 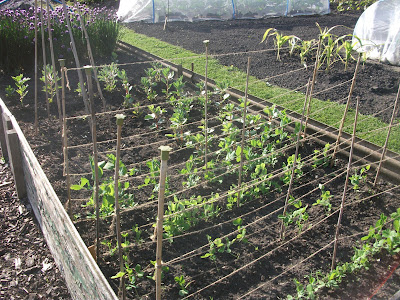 I've got lots of healthy broad beans, some which I sowed direct and some from modules. The wigwam is for some runner beans, I sowed some direct but only one has come up. I've got some that I've sowed in pots to fill in the gaps. I've also sowed some dwarf french beans which will fill the rest of this bed.
My onion bed has been split this year. In this bed are the over-wintering onion 'Electric Red' which was swelling nicely, some garlic (again some direct and some module-gown) and some Elephant Garlic which is a new one for me. There also some Shallots, 3 different types, 'Golden Gourmet', 'Red Sun' and some long thin shallots called 'Longor'. 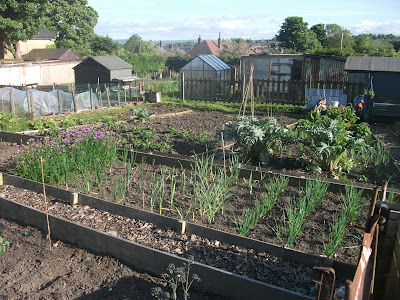 My maincrop onions 'Stuttgarter Giant' and 'Karmen' are in a different bed as there are plans to make a sort-of greenhouse in the onion bed this year. 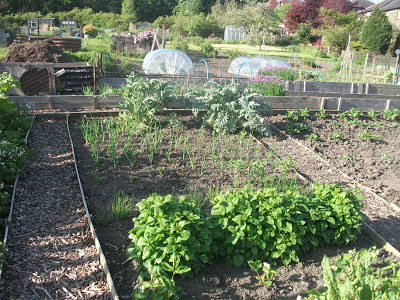 My real disastrous bed last year was the roots bed, no luck with beetroot, the celeriac was completely eaten by slugs, carrots and parsnips didn't germinate. All-in-all a waste of space. This year its looking better. I did try sowing the beetroot direct but again no germination but the ones sown in modules are now growing well. So pleased about that as I need some for the Allotment Show. I will sow some more soon too. 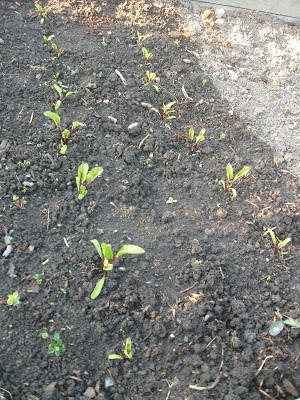 Not only do I have beetroot growing in this bed but also the celeriac seems to be ok now, I did keep some seedlings back in case the first lot were eaten by slugs but they don't seem too much of a problem so far this year. But also have some Florence Fennel and some spinach in this bed so already more successful than last year. 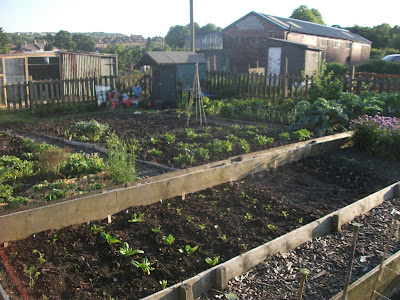 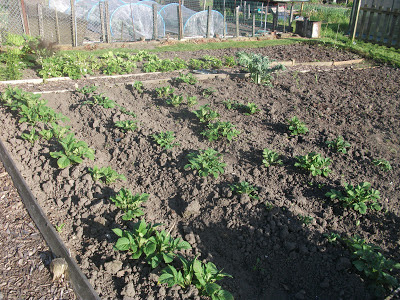 You can tell that its not been too bad for slugs and snails as I've also managed to grow some lettuce at the allotment, I usually leave those for the garden where I can keep a closer eye on it but my plot neighbour had some spare seedlings of an iceberg type lettuce so I've had a go and then I've sown some 'Little Gem' and some speckled Cos lettuce 'Freckles' and planted them too which are just getting going. 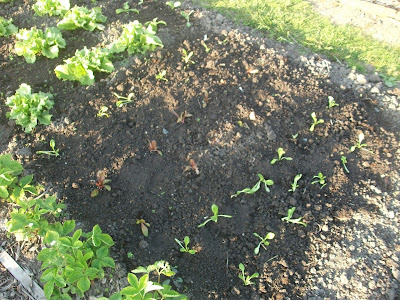 Elsewhere on the plot, I've planted some sweetcorn 'Lark' and may put another patch elsewhere and I'm busy hardening off my courgettes, cucumbers and squash ready to plant out which I will do the end of this week.
Fruit-wise I've already mentioned the apple tree, my rhubarb has been wonderful and I've had lots from that, the one in the opposite bed which I planted last year is growing well too and I'm hoping I can also crop from that next year. My gooseberries and redcurrants are covered in fruits so I'm keeping an eye on them. The strawberries are also covered in flowers and my 3 patches have now been mulched with straw. 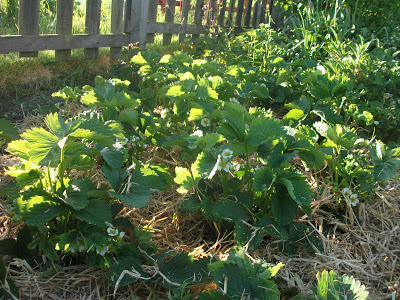 The alpine strawberries which edge the beds had looked very straggly at the end of the winter but a good haircut and they have come back strong. 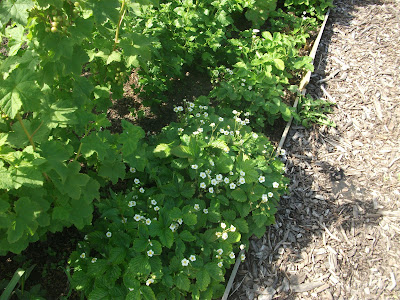 At the bottom of the plot which is quite damp and a bit shady I've got a thornless blackberry, 3 raspberry canes and a Tayberry. The raspberries I'm hoping for a crop from in the autumn and the Tayberry which languished a bit last year has grown with vigour this year and may need some taming.
Flowers are coming into bloom too, I've got self-seeded Calendula, Cerinthe, Nigella and Borage all over the plot which will add some colour soon. I've also sown some Calendula seed from Flighty which I've kept separate. I've planted out some sunflowers, another thing that was defeated by the slugs last year, and some Echium and Tithonia. I've a few things still to go in like some Dahlias and Cosmos. I've some lovely Camassias, a pale blue' which are loved by the bees. 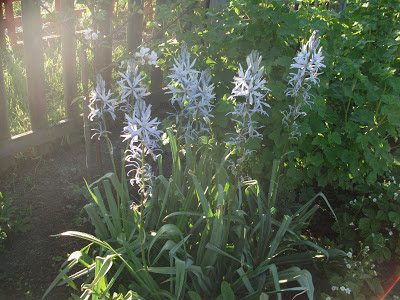 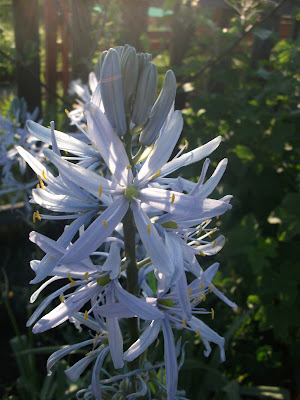 I picked my first bouquet of the year the other day, the lovely chive flowers, with pale blue Veronica and some bronze fennel which I topped up with some Erysimum 'Bowles Mauve' from my garden. 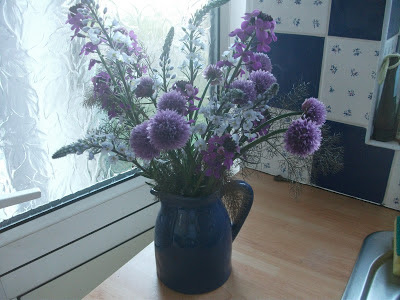 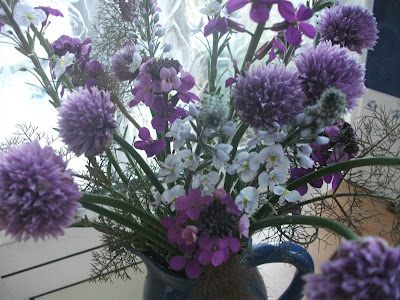 I'm loving the Veronica, I've got a patch at the allotment but I've also got a whole row in my garden at home its so easy to propagate and its spread from a small patch which I got from my mums garden and it has lovely delicate flowers which bloom from the bottom upwards so flower for quite a long while and then the rosettes of the leaves are nice and largely evergreen. I think thats going to spread round my front garden next. 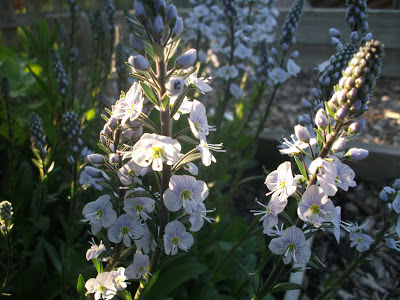 Apologies for the long post but I've had a lot to catch up on.