Tatton back on form

Its been the Tatton Park Flower Show this last week. This is my local show, I think I've been every year since it started and after tinkering with it quite a bit in the last few years, I think they've gone back to what it was like at the start. I definitely enjoyed it more this year despite the inclement weather. I think they have struggled to establish its own identity to stand apart from the other Flower shows like Chelsea and Hampton Court. But now they have adopted 'The Great Garden Carnival' theme which I actually think is fun and twice a day a Carnival parade makes its way through the showground. There is also a colourful Carousel which gives great views over the showground. Horticultural purists may not like all this but I think its a great way to get a mix of people into the show. As with the other shows they have the main Show gardens but its quite noticeable that the well-known designers that create gardens at Chelsea don't come here which is a shame I think, though Chris Beardshaw has created a few gardens here. The Show garden that won 'best in show' was the garden for the charity Perennial designed by Paul Hervey-Brookes, a very traditional garden with a long herbaceous border and a pavilion. A great advert for the charity. My photos aren't very good as it was a very dull day. 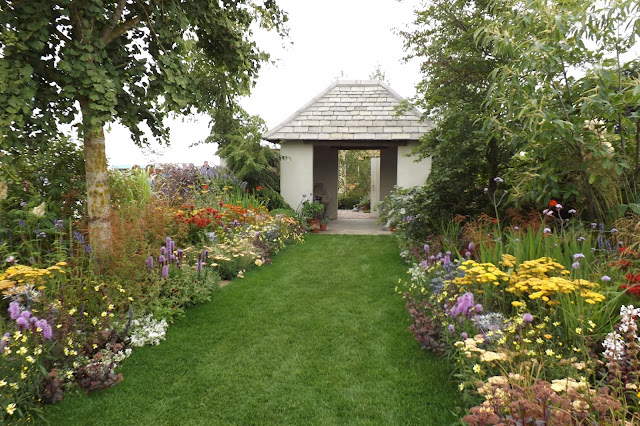 One of the most vibrant gardens even in the dull weather was the Aurora Arbora garden which was a contemporary garden inspired by the Northern Lights, the planting was really fabulous. 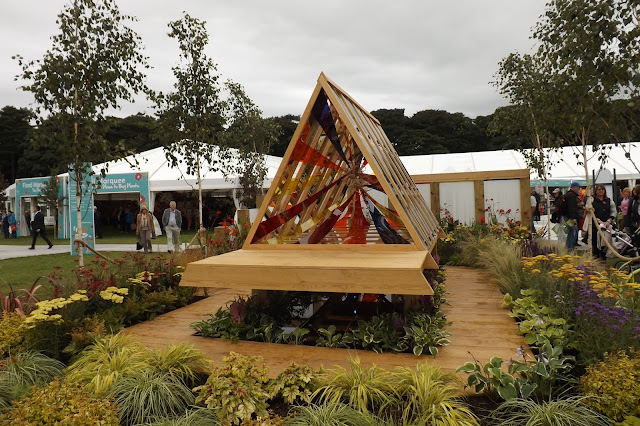 Tatton is establishing itself as a Flower show for up and coming designers and it has developed the RHS Young designer of the Year competition. The gardens created by the three designers were quite different gardens but all of good quality, with lots of nice ideas. In my opinion, these three gardens were some of the best in the show. 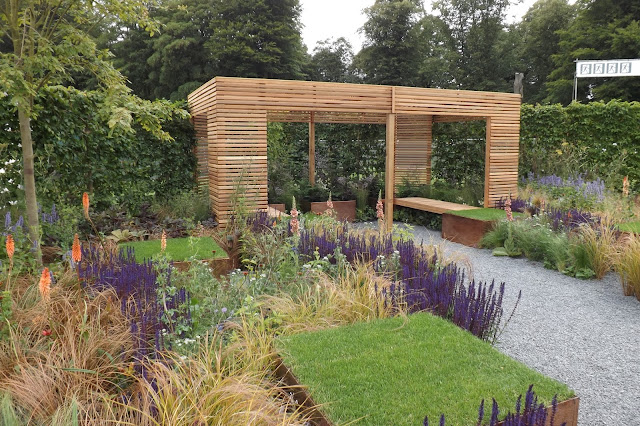 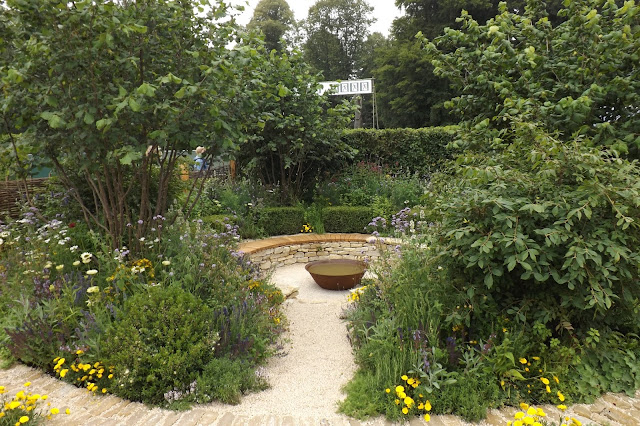 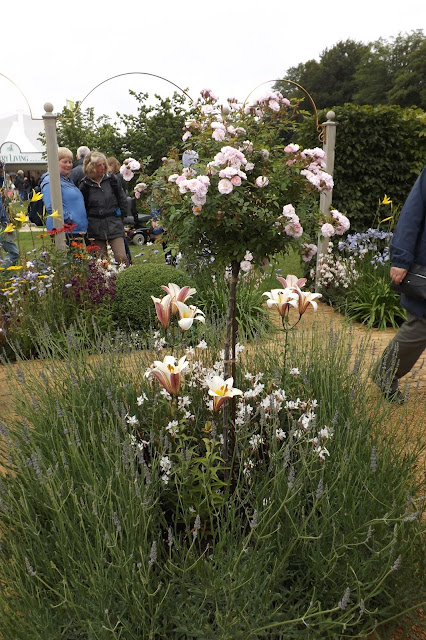 It was really difficult to take a photo of the Sunset garden as you could walk through this garden so always had lots of people in!! My favourite was the middle garden shown above, the Time is healer garden by Kate Savill, which was based on a Physic garden and was a very tranquil garden.
Apparently after a lot of requests from visitors they have bought back the back-to-back gardens. These were always one of my favourite parts of the show. They are only small (6m x 4m) but the range of gardens that are designed is always fascinating to me, I always find that I get ideas from these for planting and design. More accessible to the average gardener I guess. 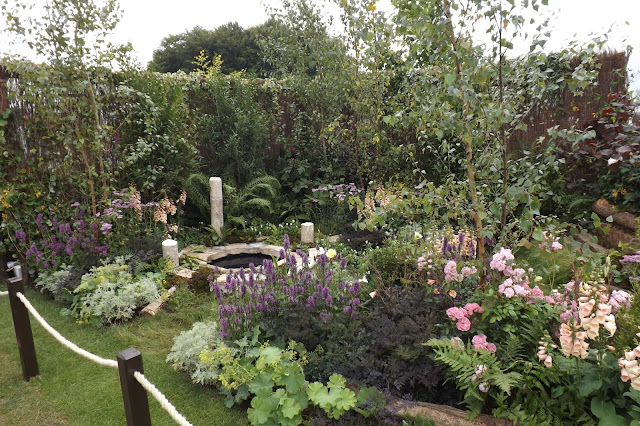 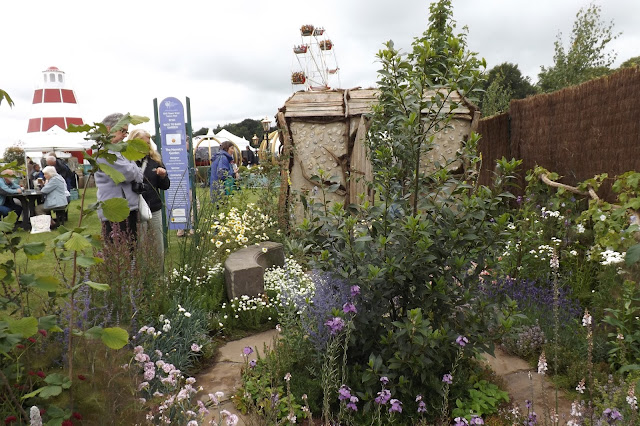 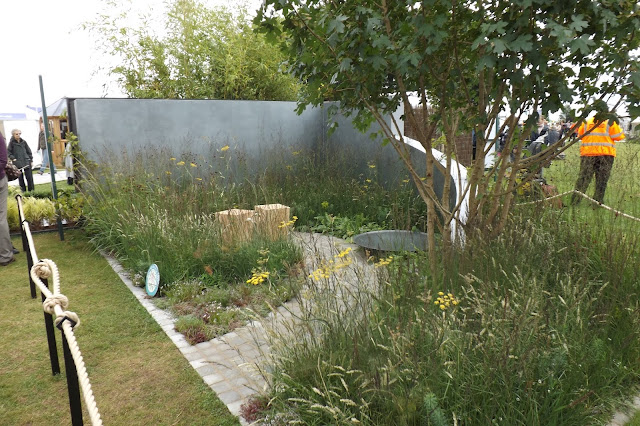 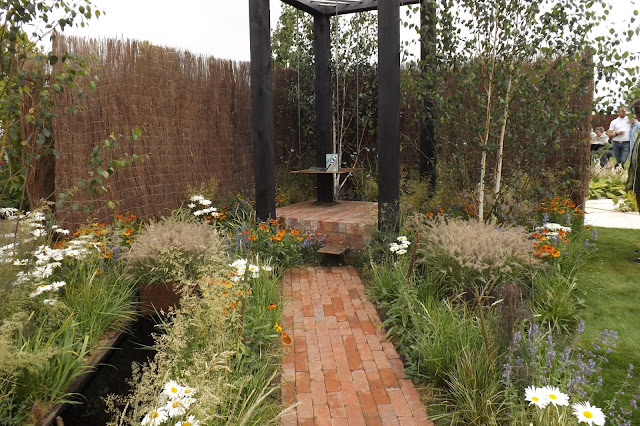 I had a couple of favourites, with quite different colour schemes. The first was Surf n' turf which was planted to evoke the waves of the sea and so was a mix of blues, purples and whites. I liked the feeling of enclosure that was achieved with the planting and timber posts, it felt like a secluded place for relaxing. 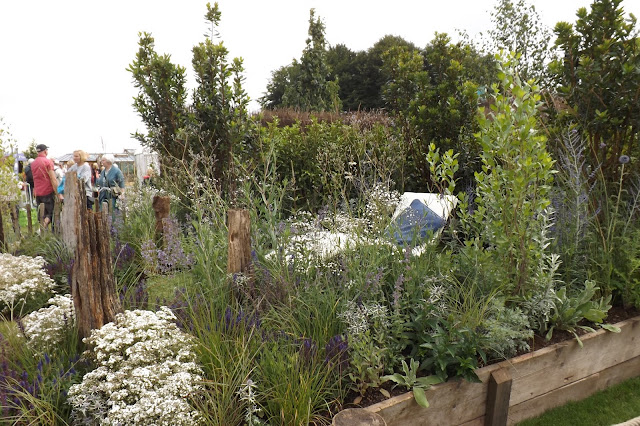 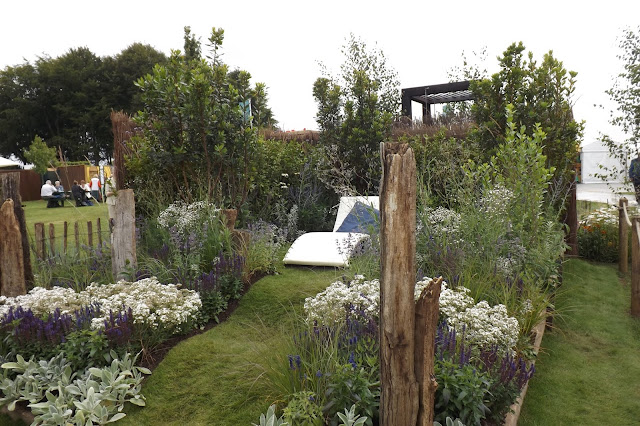 I also liked the Melitta garden which had a vibrant colour scheme of warm yellows, oranges and reds. As might be expected from the name this garden was designed to attract bees. I loved the willow bees and the hexagonal structures to represent the honeycomb to divide up the garden. 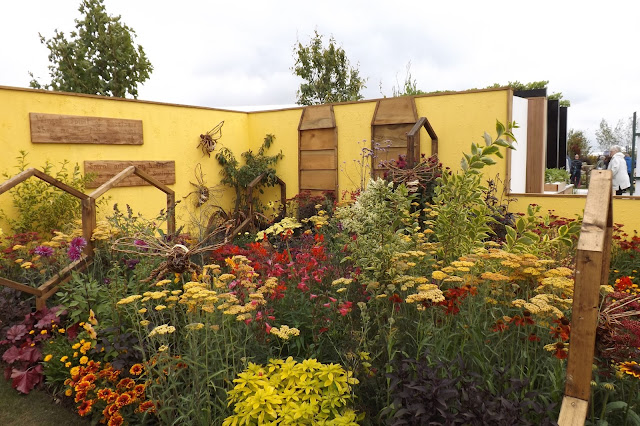 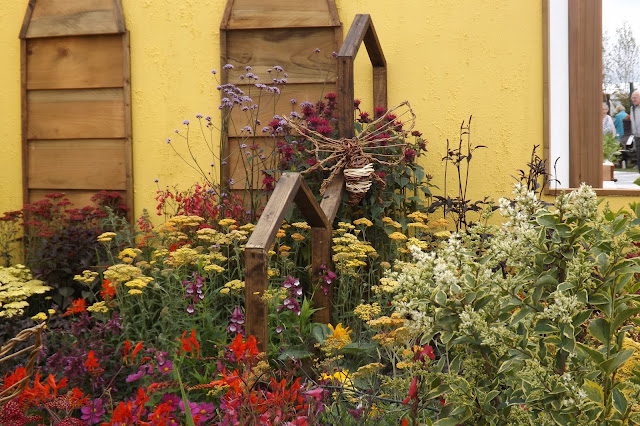 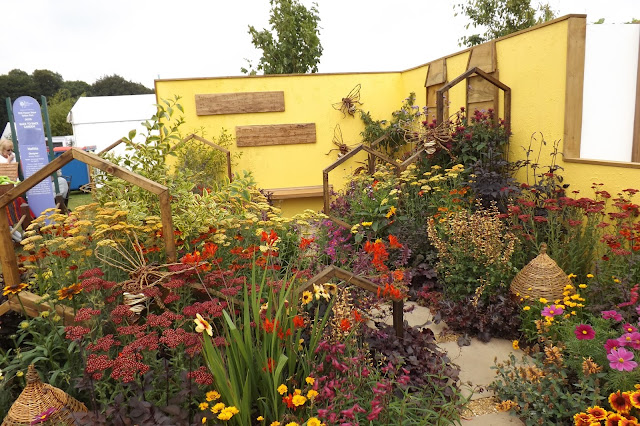 Tatton also has a range of gardens built round a central theme, in previous years this has been Galaxy in 2013 and Elements in 2014, this year the theme was the International year of light. 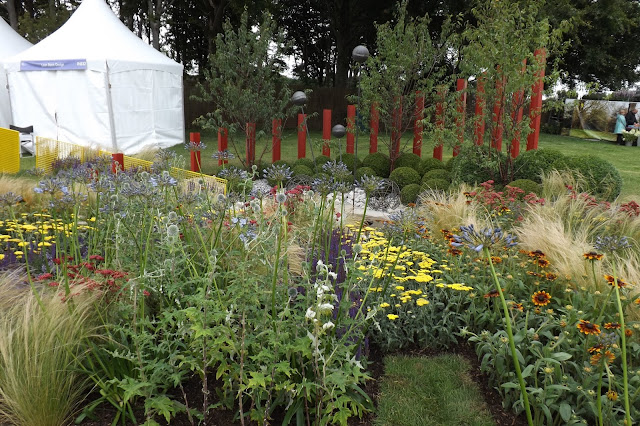 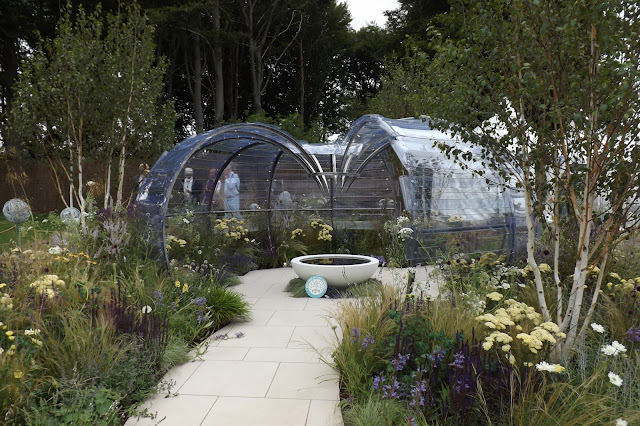 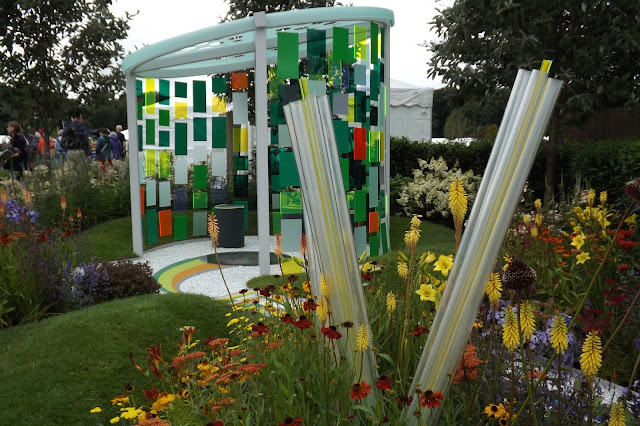 All very abstract but some great examples of planting schemes on all of them.
Tatton used to renowned for the Flower beds that the councils built and there used to be many entrants and competition was fierce but its a sad sign of the times that there were only 3 this year!! Cutbacks in most if not all councils will surely mean that this will probably disappear in the next few years. A new feature this year were the 'Blooming beds' which were very small plots (3m x 3m), this was supposed to be a way for novice designers to test the water with small designs and planting schemes, or for small community groups to advertise themselves. These again had a theme which was Plant Hunters. I actually missed this bit and only heard about this on the TV coverage. There were a couple of other new competitions, one to design deckchairs (I think was to fill the gap where they usually have the council flowerbeds!!) and the other was the garden hideaways competition which turned out to be a big favourite with the visitors. But will finish this post here and update on the Floral Marquee and other features of the show in my next post.....