They arrived very early but were over far too quickly with the hot dry weather at the end of April and early May, that is my alliums in the front garden.
It is Allium 'Purple Sensation' though I think there are a couple of rogue bulbs in there too, which flowered a bit later, not sure what variety that was. 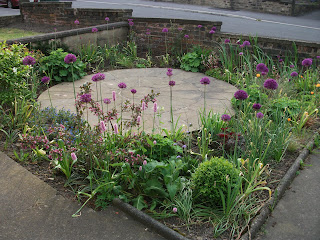 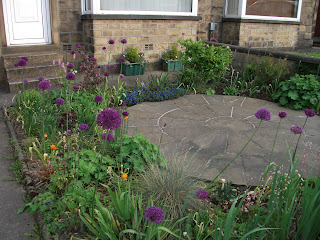 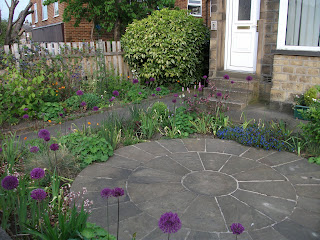 There a few plants in there that really need to go, that don't quite match the colour scheme, such as the blue Lithodora 'Heavenly Blue', but I can't quite get the courage to dig up one of my favourite plants, I'm taking some cuttings this year so if they take and I get some new plants then I might move it.
One corner of the plot has a lovely plant combination which I'm quite proud of, the combination of the Allium, the pink Persicaria bistorta 'Superba' and the Weigela with the dark purple leaves and pink flowers. 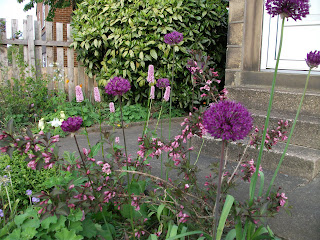 The Persicaria spreads quite easily, I've also got a couple of clumps in the back garden so I might split it and use it in other parts of this front plot.
In the back garden one of favourite flowers at this time of year is the foxglove, I have one that self seeded in my cutting garden it looks magnificent. I've just sown some for next year and have potted up some seedlings that have seeded themselves around the garden. 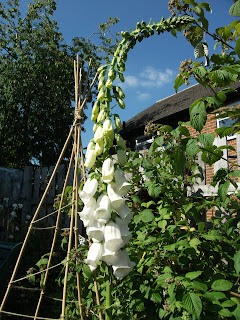 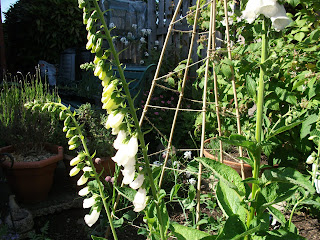 My archway onto the grass had partly blown down over the spring, it was rotted in places so I put a new one up a few weeks ago. Managed to not have to cut the honeysuckle down completely and so still have some flowers. On the other side of the arch is a Clematis 'Arabella' which flowers over a long period and there is also a jasmine which is growing well now and will hopefully flower this year. 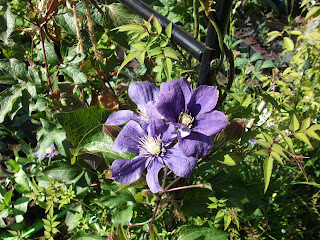 At the bottom of the garden is an old apple tree and next to it has self seeded a tree which has a lovely weeping habit. At this time of year it has lots of rather inconspicuous flowers and then it has lovely berries. I say inconspicuous, that is to me they are not very showy but this week they have been completely covered in bees it has been swarming with them. 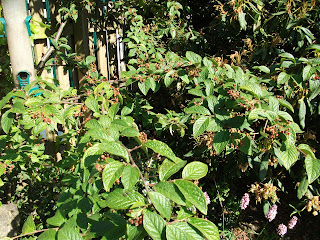 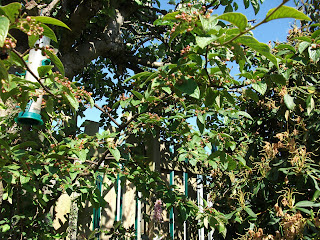 I'm not sure what the tree/shrub is I'll have to look it up.
Another flower loved by bees is the Nectaroscordum siculum ssp bulgaricum (a bit of a mouthful, had to look up the proper name), which has lovely delicate bell-shaped flowers, cream flushed with pink and green. Here is a bee's eyed view! 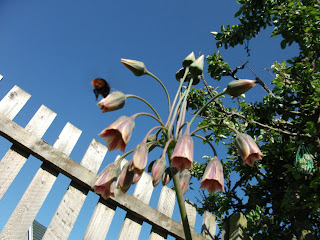 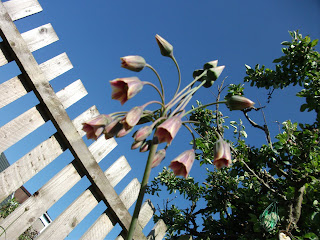 I was lying on the lawn and watching the bees going in and out of each flower. The flower has a curious habit, the flowers start of dangling down and open but as they get pollinated they close and the flowers point up to the sky.
I have a dilemma in my back garden, I got free from a gardening magazine an oriental poppy which was supposed to be 'Patty's Plum' which is a dusky pink variety of poppy. I planted it but the one that is growing is no dusky pink, its vibrant orange! I have to say I tried to move it last year but it survived and grew again this year and before I knew it it had buds on so I left it. The first flower opened the other day and I have to say it is stunning with the sun through it. 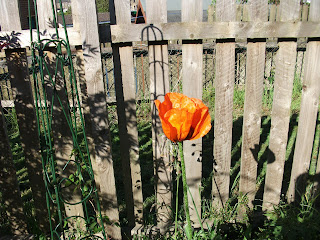 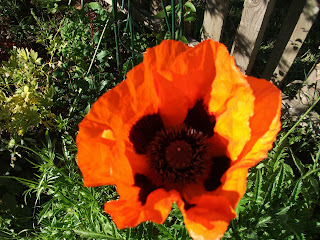 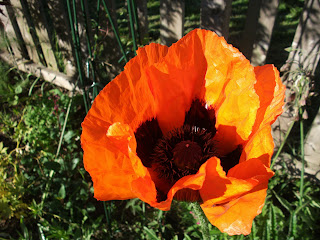 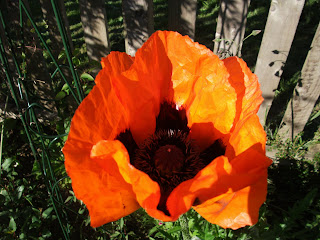 It looks good against the dark purple leaved Acer but doesn't really go there I don't think, I'll let it flower again this year and then decide what to do. 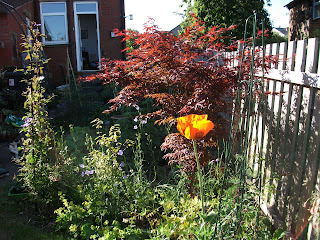 A new plant that I've grown from seed this year (from the RHS seed list) is Lathyrus tingitanus, with vibrant pink flowers, though unlike the sweet pea the flowers are not scented but are lovely. 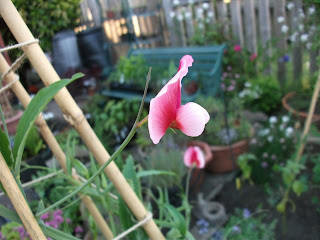 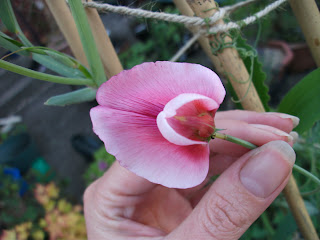 Finally I want to introduce my new bird friend. 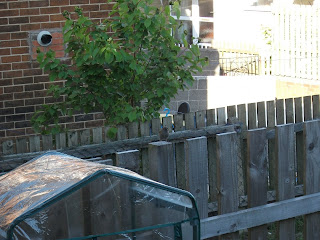 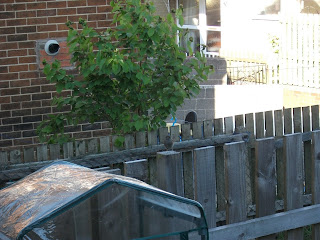 Can you spot him on the post. It keeps coming and sitting on there and peeping at me. Its a Dunnock and I think it must have a nest in the nursery next door. I've come to realise it does it when Bob, my cat, is there too. So I think it is keeping an eye on Bob and maybe sounding a warning. It is there alot, I hope it brings all its babies up without Bob getting any which is always a worry.
Posted by Annie_H at 22:19

Email ThisBlogThis!Share to TwitterShare to FacebookShare to Pinterest
Labels: My Garden