I have just completed the Big Garden Birdwatch for my garden.

Actually it was a lovely thing to do on a sunday morning, to just sit and watch the birds. I've been watching from my upstairs bedroom, and I opened the window so that I could hear them too. I think the cold probably helped the number of birds that I saw, as the feeders were very busy. I have placed most of the feeders in one of my apple trees at the bottom of the garden, which is next to a big rhododendron bush, which I think the birds like as they fly into there for protection if they are disturbed. 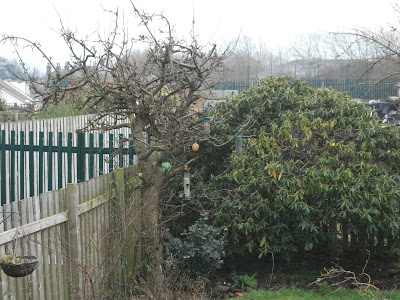 I have three feeders, one with hulled sunflower seeds, one with peanuts and one with nyjer seeds, plus a hanger with fatballs in them. It seems to attract a mixture of birds to the garden, the sparrows, like the sunflower seeds, the blue tits like the peanuts and goldfinches like the nyjer seed. I put this feeder out especially to attract the goldfinches as I think they are such beautiful birds, very easy to identify with their red face and gold wings. The other day I had a whole flock of them in the garden, the collective noun is a charm of goldfinches, how poetic. It took them a while to find the feeder but now I see them regularly.
My most common garden bird is definitely the sparrow, which I know is struggling these days but I regularly get flocks and they roost in shrubs and bushes round about here, making a racket sometimes but its lovely to hear. It was difficult to count them today as they flit from one feeder to another and in and out of the trees and bushes but I think there were 11 in the garden at one time.
At this time of year I also see a couple of robins, which often have run-ins with the dunnocks, chasing each other off,  I also have a few local blackbirds in the garden which tend to get the bits that drop down from the feeders. Last year in our really cold winter, in the snowy spell at the beginning of January I was very excited to see some fieldfares in the garden, which were attracted to the apples which had dropped from my trees which I hadn't tidied up, thank heavens I'm not a tidy gardener.The blackbirds have started to sing again in the mornings and at dusk and there is nothing nicer to hear.
My most lovely bird today though was a bullfinch, another beautiful bird with a rosy pink chest, it was the male that was in the garden, I couldn't see a female with him, though in the past when I have seen them in my garden they have been in pairs.
I love feeding and watching my garden birds but I have pangs of guilt every now and then as I also have a cat. I have had a few traumatic moments when he has bought in a bird, often dead but not always. I've rescued a few but others have just been unsaveable. I like to think that I help more birds than Bob kills but it is still a moral dilemma. He's getting old now, and doesn't go out as much so he's definitely not bringing as many things in as he once did. Anyway Bob is fast asleep this morning so the birds are having a good time.
So in my hour, I saw the following (the number is the most seen at any one time):
Sparrow - 11
Blue tit - 2
Blackbird - 2
Dunnock - 2
Robin -1
Goldfinch - 4
Bullfinch - 1
Posted by Annie_H at 12:43

Email ThisBlogThis!Share to TwitterShare to FacebookShare to Pinterest
Labels: birdwatch, My Garden