Review of the year

I know lots of bloggers have done this but really this is just for me to keep a note on things which have worked well, or not so well and to decide what to grow again or whether to try new varieties. But also to make me feel better when I go to the allotment and see it all bleak and bare, to prove to me that things do get better.
It has been my first year on the allotment and I've loved every minute of it even the weeding. Its not my first allotment but you have to get used to the conditions on the site and I've had challenges on this site which I never had on my other plot. For example here pigeons are a problem and it seems alot drier (my other allotment was in Disley on the Cheshire/Derbyshire border). I've been growing fruit and vegetables in my garden for a few years so it hasn't all been completely new to me but its always a challenge on a new plot and it needed some preparation as it hadn't been cultivated properly for a few years. I was extremely lucky though as there weren't any really horrible weeds, like couchgrass or horsetails, it needed a good dig over though and some areas needed more work than others.
I 'rescued' a shed from a skip and now have a lovely place to sit and store all my stuff. 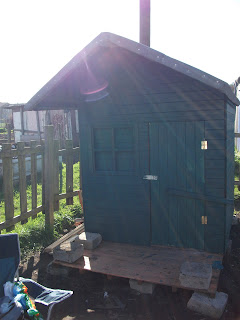 The main troublesome weeds on the plot are thistles and dandelions which I've tried to remove the whole root but obviously will have missed some. There are some buttercups which are spreading at the bottom end of the plot, an area which I didn't cultivate last year. Throughout the year there were also some problematic annual weeds, a particular pest was an annual euphorbia, which seeded all over the plot.
There were two raised beds which were virtually ready to plant, they just needed a dig over and some compost added and I started with these while I prepared the other beds on the plot. These two beds I roughly divided into 4 to have some sort of crop rotation. So I had a onion family bed (garlic, onions, shallots and leeks), a legume bed (broad beans, runner beans, peas), a brassica bed (calabrese, purple sprouting broccoli, cabbage and kale) and a roots and greens bed (carrots, parsnips, beetroot, celeriac, spinach and chard). 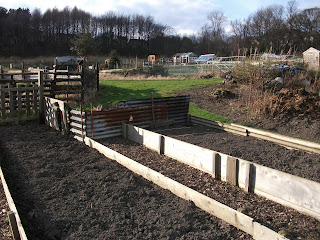 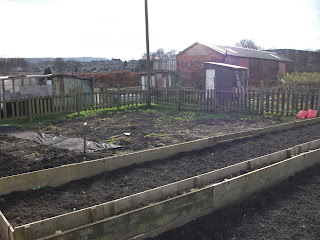 Then there is the remaining a big square plot which I divided into smaller plots separated by paths made from black membrane, just so that I had manageable areas to work on and didn't get too overwhelmed by the whole digging process! I created a more permanent bed running along one side of the plot where I have planted a small strawberry patch, a gooseberry bush, a redcurrant and a rhubarb crown. This was interplanted this year with sunflowers, nigella, cerinthe, marigolds, some herbs, and I've edged it with alpine strawberries. 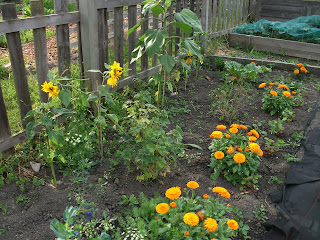 On the opposite side of the plot is another long bed into which I planted potatoes (Vales Emerald, Charlotte and Pink fir apple). I had a good crop and I'm still eating the potatoes, down to the pink fir apple now but still delicious. I'm going to try some different varieties this year, I'd like a good potato for baking and roasting so I need to do some research. 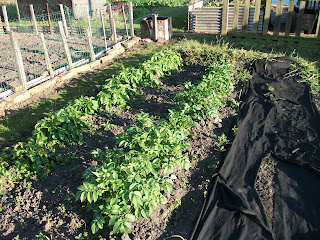 Then in the middle of the plot were two smaller rectangular beds into which I planted a mixture of crops some tomatoes, cucumbers, sweetcorn, courgettes, squash, dwarf beans, kale, chard. There was plenty of space for the squash to travel around and across the plot sending tendrils in different directions though I removed some after a while. I planted too many courgettes but I just didn't know how many would survive luckily there is a local greengrocer who bought some off me when I had a big glut. I grew a mixture, some green, yellow and some round ones, which were very popular, prolific and great for stuffing! My sweetcorn was my big failure this year and thats a shame as its one of my favourite crops and I have grown it successfully before. I will try again next year, but maybe sow a bit earlier and water better. Though reading other peoples blogs I realise that many people had problems with this and it may have just been down to the cool summer that we had.
May 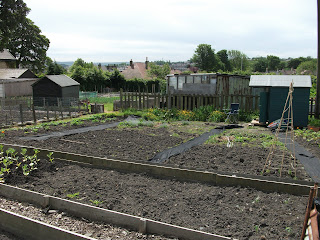 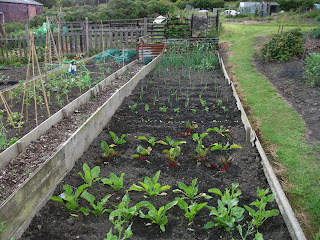 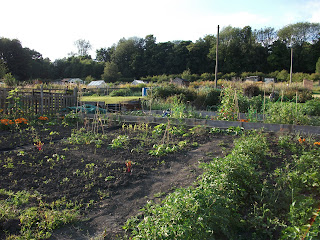 And a very lush September 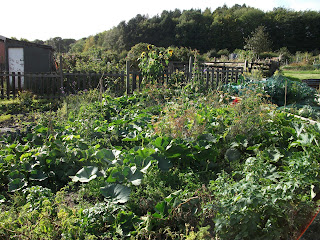 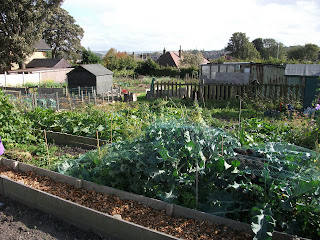 Most things I'd grown before but I tried a few new crops, celeriac, parsnip and the squashes. Squashes were a great success and again I'm still eating these as they store so well. Celeriac was a bit small and parsnip a bit forked but will grow them again.
Some of the things that I've learnt this year are to always net your brassicas to protect from pigeons! To have a good sturdy framework for your peas and beans. To not get too uptight about the weeds, some of them attract beneficial insects. This is the first year that I've seen loads of ladybird larvae on the plot and most were on the weeds! Although I put down weed suppressive membrane to make the paths these were only temporary and haven't lasted. They are mostly in bits (I obviously didn't buy v good membrane) so I really need to make proper paths like the ones next to the raised beds. However the main structure of the plot is there. I also want to make a proper compost heap, so I am going in search of some pallets for that. The bottom end of the plot, near the shed, was not used at all last year and is quite weedy now so this is the main project for this year.
I plan to grow most of the same next year, though going to give runner beans a miss as I'm not a big fan and my dwarf french beans were very prolific and I much prefer the taste and texture of these. But maybe do two sowings of this to extend the growing season.  I'm not going to grow any cabbage over the summer but sow it later to crop later and keep over winter. I'll stick to the calabrese for a summer crop. I also want to grow more flowers including a big frame of sweet peas for cutting. I've lots of seed still left from previous years but I've supplemented with a few new varieties.
So overall a great year and seeing it change over the year makes me feel good, both for my soul and my body, but I completely agree with wellywoman in her great blog, who needs a gym when you have an allotment.
Posted by Annie_H at 13:16