So I have been to the allotment a few times but just not had chance to write a blog about it for a while. Most of my time there has been spent clearing any old crops from last year and spreading compost and digging over the beds in preparation for this year. In particular I'm digging over a part of the plot which I didn't use last year which is always a bit harder to dig over and has plenty of dandelions and some thistles but I'm getting there. I need to get it finished this week though as I'm a bit behind in putting my spuds in.
In the fruit bed I've tidied my strawberries and the alpine strawberries were cut back to allow new growth, they look better now and are starting to flower already. I have a whole row of these and the lovely thing about them is they will flower and fruit all summer and autumn, providing small fruits with an intense flavour of strawberries with a hint of sherbert, I love them. They are very easy to grow from seed and I've sown some more this year. The variety is 'Mignonette' and they are edging my whole fruit bed.
I've planted a dwarf apple tree 'James Grieve' which I'd heeled in in my garden over the winter but hopefully will get established now.
The redcurrant which I planted last year is looking good and I should get quite a reasonable crop I hope. 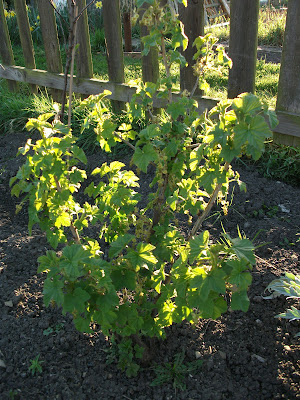 The rhubarb, which I also planted last year, is coming on well, I'm not sure whether to harvest any this year or give it another year to get established, will see how it looks. 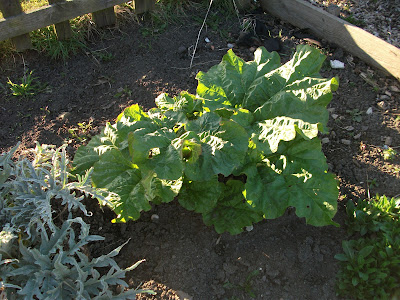 I have planted my garlic, which I had started off in modules at home, my shallots 'Golden Gourmet' and the autumn planted onions are coming on well after the winter. I've planted my red onions in modules as these took ages to get going in the dry spring last year so going to give them a bit of a head start. I've also sowed some leeks so the onion family is all under control.
In the rest of the allotment there is not much else in, apart from a few kale plants and some globe artichokes which I sowed and planted last year. They have survived the winter and though looking a bit straggling now, with a bit of a mulch I'm hoping they will get growing and send some flower shoots up this year. 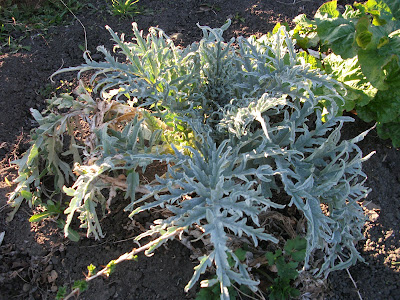 The broad beans that I sowed in autumn as a bit of an experiment was a bit hit and miss, there are 6 plants which have survived the winter out of 10 seeds that I sowed. They need a bit of a feed to get them growing again I think but I've also sown some more anyway. 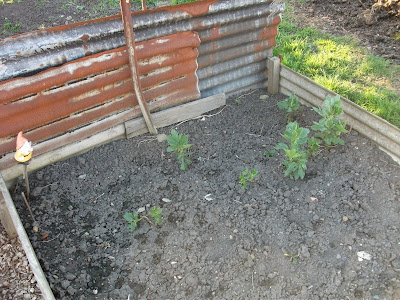 But I guess the rest of time has been spent sowing seeds, the usual things at this time of year, chilli peppers, aubergines, tomatoes, half-hardy annuals, kale, calabrese, leeks, more broad beans, peas, and salads (which I resolve to sow little and often this year), think I'm just about in control of that but its the pricking out and potting on stages when it starts getting busy and a bit of a juggling act. The back bedroom is turning into its usual greenhouse at this time of year for the tender things and then I have three 4-tiered greenhouses outside which I use as coldframes to sow and protect other things. I had a lovely day in the garden on sunday sat in the sunshine sowing seeds. 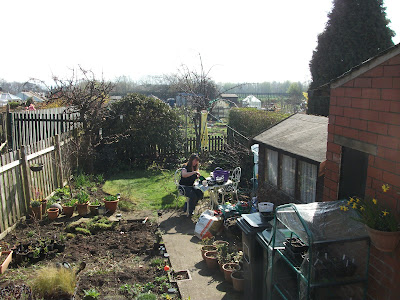 It was too much like hard work for some though. 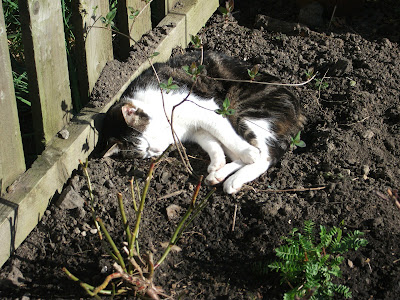