Ok so I know the Chelsea Flower show is not everyone's cup of tea, some say its elitist and snobby, some say that its unrealistic for true gardeners and some criticise its environmental credentials. Yes I know all that but how often do you get an event where you can completely immerse yourself in stunning gardens and fabulous flowers. I've been to the flower shows at Hampton Court, Tatton, Southport and Harrogate but for me the quality of the plants and the gardens at Chelsea is just that one notch above. I love to see the plants in peak condition and the new varieties, to smell the roses as well as just see them. The RHS are more and more trying to reuse the gardens in other settings and reduce the carbon footprint.
The weather this year was glorious and the plants seemed to revel in it. I had a half day ticket and it can be very busy when you first get in but I headed for the slightly less popular small gardens first rather than the show gardens and then looked round the show gardens a bit later when it was a bit quieter. The Artisan gardens are situated under the trees (inhabited by squawking parakeets) in Ranelagh gardens. They are so much smaller than how they appear on the TV.
The first garden on the lane was the Plant Explorers garden designed by Scottish Agricultural college. 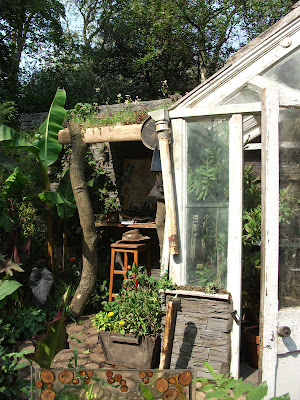 It is a garden for a young plant hunter, it has a small outdoor office for planning the trips abroad and a greenhouse for growing the plants on the return. As you'd expect there were lots of unusual plants in this garden. One of the main features are some resin blocks into which is encased some of the treasures found on his travels. 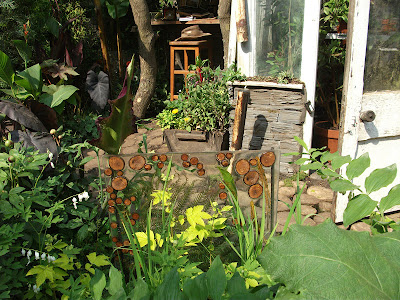 You can spend hours looking at this garden and still not see all the small details. I love the plants growing a very thin layer of soil on the windowsill, as if the gardener just popped them in there for lack of any space. Then there is a lovely green roof. 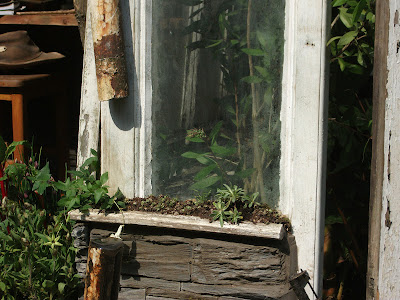 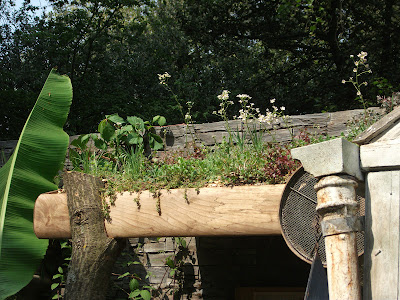 A lovely detailed garden.
Next was the Welcome to Yorkshire sponsored Bronte's Yorkshire Garden. 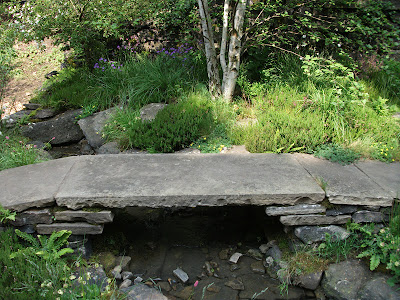 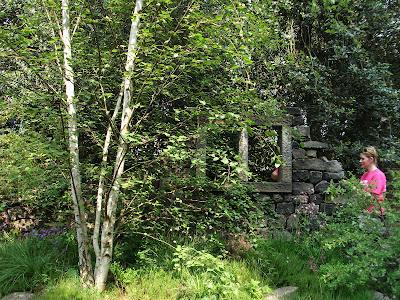 The window at the back of the garden evokes the house at Top Withins, supposedly the inspiration behind Wuthering Heights and the bridge is similar to the one on the walk to Bronte Falls near Haworth, where the Bronte sisters lived. A simple garden with mostly natural, wild planting of grasses, ferns and heather with a lovely Silver Birch in the centre. This garden got a gold medal and won the peoples award for their favourite small garden.
A garden created by a Slovenian designer was next called Pepa's Story. It contains a shepherds hut built from limestone, with a fireplace and again naturalistic planting. The planting is characteristic of the Karst area of Slovenia. 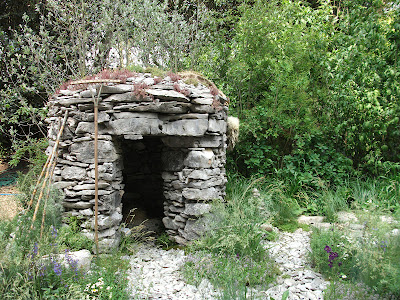 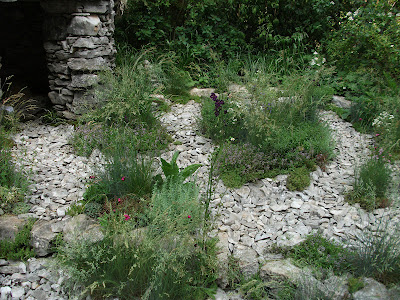 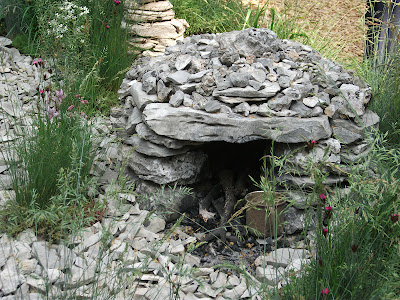 The vital work carried out by WaterAid is highlighted in the next garden.
The hut is actually a composting latrine. 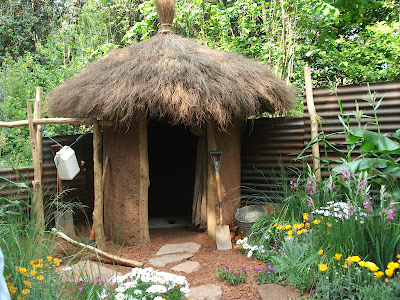 Another garden dealing with water issues is the Naturally Dry garden, a William Wordsworth-inspired garden. It is said to be a garden set in the South-East of England but is inspired by gardens from Cumbria, a county which doesn't suffer from a shortage of rain! It gives ideas and inspiration on drought tolerant planting and how to capture water for use in the garden. 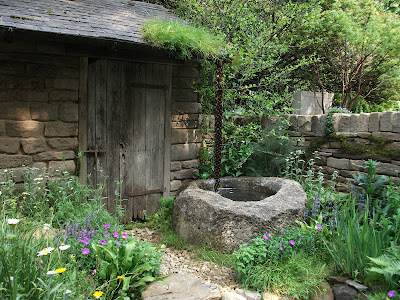 More naturalistic planting but some nice details like the ivy-leaved toadflax in the cracks in the wall. Some nice ideas here, the stone well collects rain water and run off from the roof of the stone building. The bare soil is mulched with gravel which prevents evaporation but also allows rain to run through it. Then the designer has chosen a host of drought tolerant plants, fennel, Salvias, foxgloves, aromatic foliage plants and grasses. 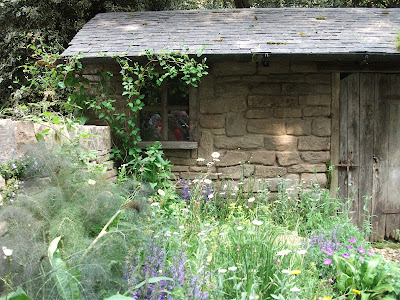 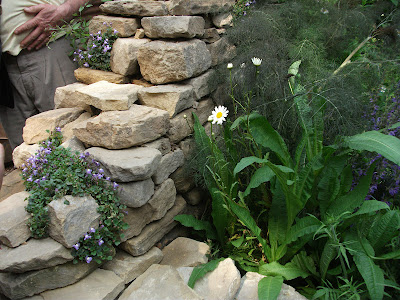 One of two gardens at this year's Chelsea inspired by the Italian renaissance gardens, but this time on a small scale. The ACPO Garden is an "outdoor space designed for contemplation and communication", well it was a garden that actually looked like a garden and not a scene from the countryside, so I liked it. It had a raised planting area with seats round it. Boosted by vibrant planting of foxgloves and I think my plant of the show, the Geum, a few varieties including 'Totally Tangerine' and 'Marmalade', it was backed by a lovely hedge of Thuja occidentalis 'Smaragd' and had a gorgeous Acer grisum in the corner. 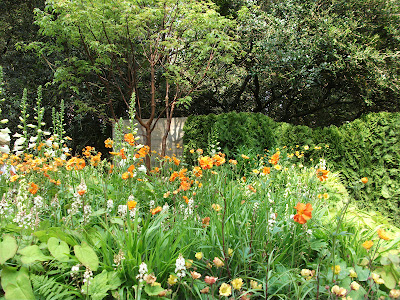 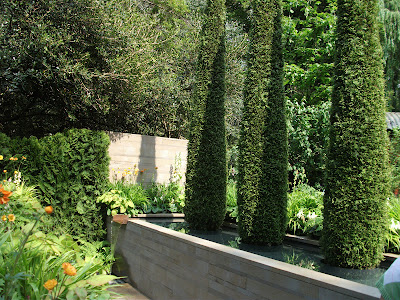 The Thuja was used again to create the topiary columns.
Another literary-inspired garden was next, this time Thomas Hardy and the beautiful Dorset countryside. The Planksbridge Shepherd's Hut garden was like a scene from 'Far from the Madding Crowd'. It was a very relaxing space. I loved the hut and the small vegetables grown around it, how about the shepherd's crook climbing frame for the beans, lovely. 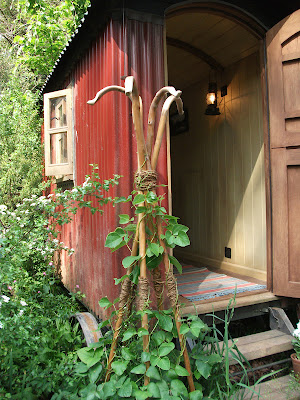 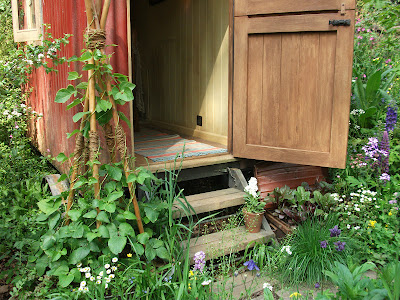 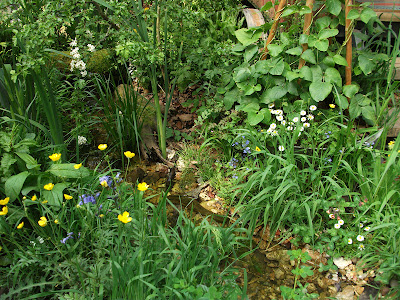 The Artisan Garden which won best in show was next.
Called Satoyama Life, it is a garden designed to show the importance of living in harmony with nature. 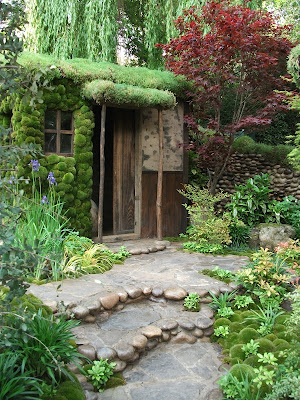 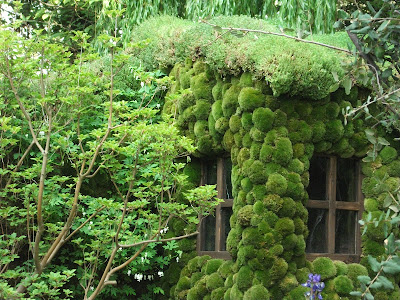 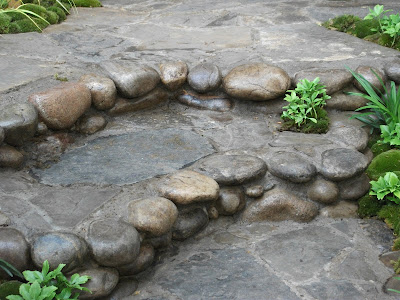 This is not the sort of garden I'd like myself but I love this garden, the green makes it so calming, the Japanese elements are lovely, but most of all I love the green mossy shed, I would like that. The round shapes are repeated through the garden in not just the mossy shed but on the pebbles in the path steps and also the pebbles on the wall.
So that is the Artisan gardens, which are usually my favourite gardens but I think I prefer some of the show gardens as many of these Artisan gardens this year were more naturalistic wild gardens, countryside settings rather than real gardens and so less inspiring for my own garden.
Another set of small gardens have been given a new name this year, they are called the Fresh gardens and these had no fixed brief and were supposed to be innovative and creative. These are the gardens that get people talking and are not to every bodies taste. Some of the talking points were blue string, QR codes, artificial grass and an exercise bike which powers your water features.
There you go and here are some pictures. 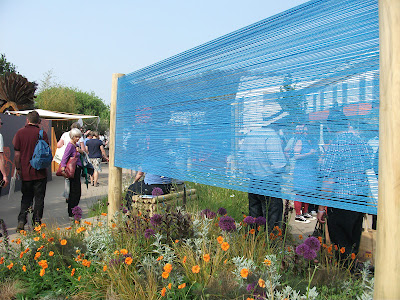 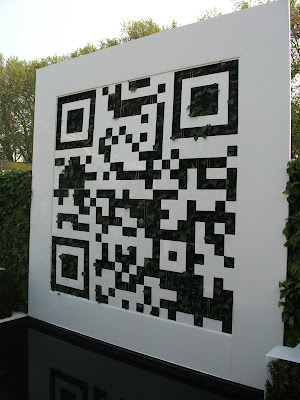 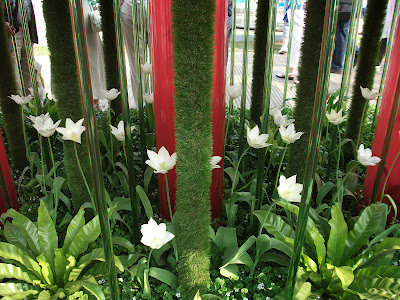 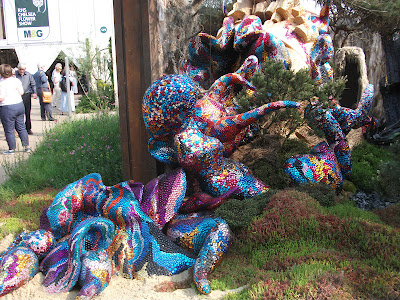 Hmmm.......
I did like the Bradstone Panache Garden though. Vibrant planting (again lots of Geums), but also aquilegias and foxgloves. Very colourful. 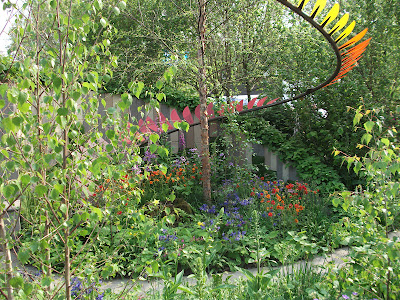 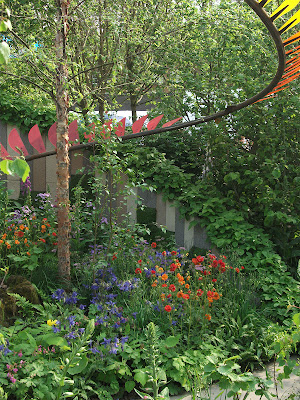 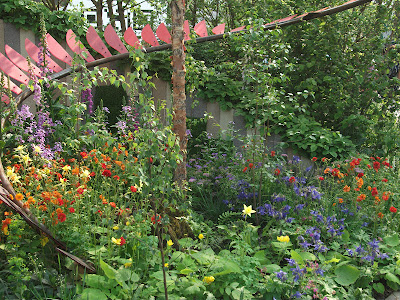 So that completes my tour of the small gardens and describe the show gardens in my next post!
Posted by Annie_H at 22:52