Gardening on the edge

We've just spent a few days on the North Yorkshire coast, staying in a lovely village called Runswick Bay, which is just north of Whitby. Its a higgledy piggledy group of houses, with a pub and a cafe on the edge of a lovely beach. When we got there the tide was in so we walked round the village admiring the gardens. 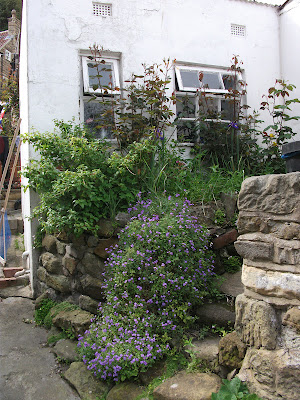 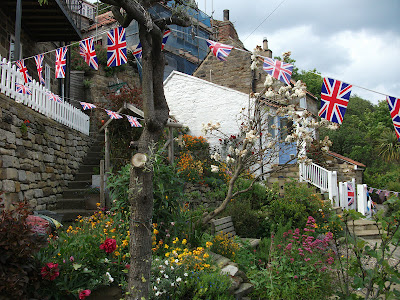 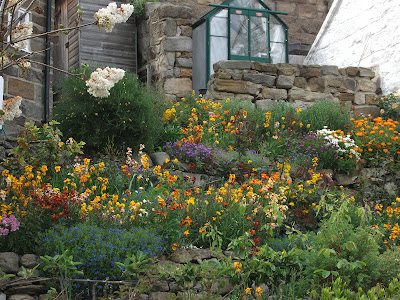 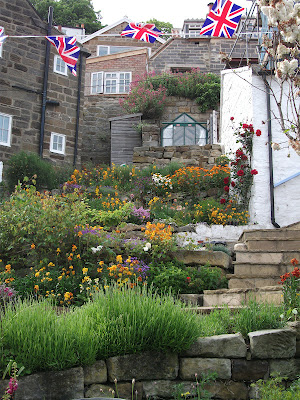 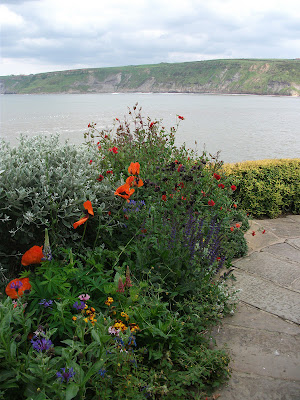 Its obviously reasonably mild as they grow some less hardy plants like this fig. 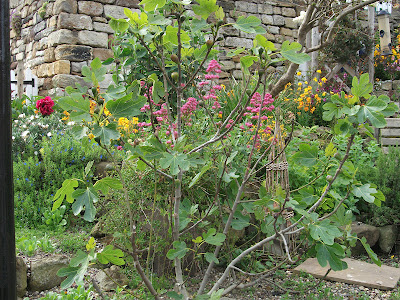 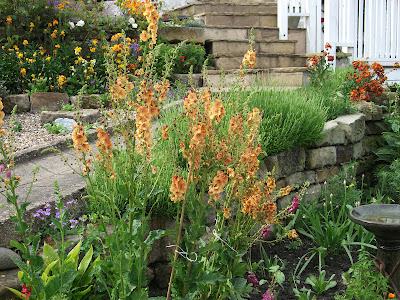 Mind-your-own-business has taken over in the crevices of this garden. 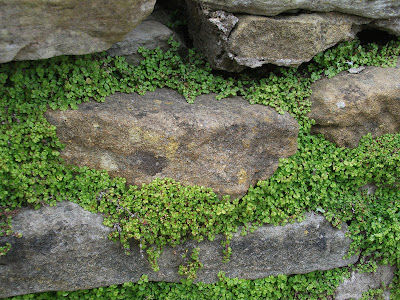 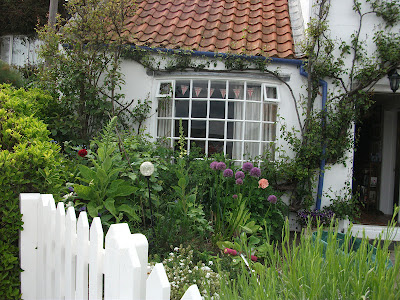 Then we discovered this vegetable plot, talk about gardening on the edge. 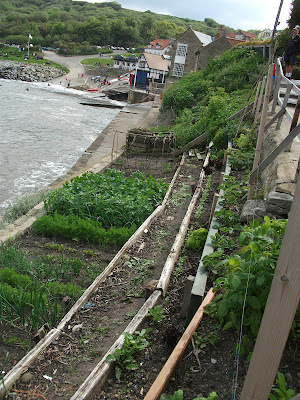 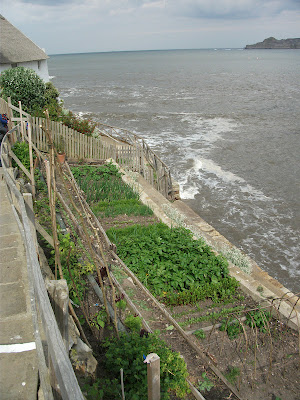 The spuds are looking healthy. 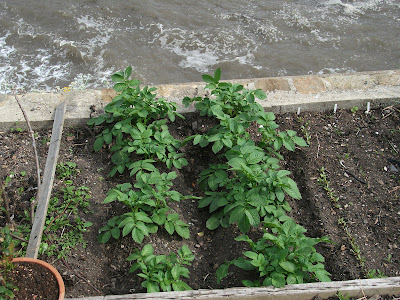 I can see carrots, onions and beetroot, all thriving. 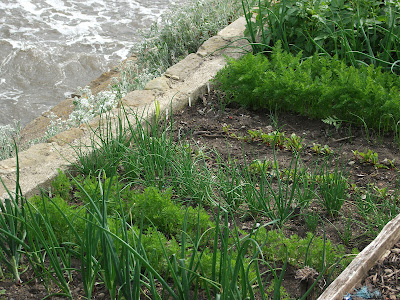 Fantastic, I saw the owner pop out of little cottage, pick some salad for his lunch. I'm just not sure I'd like to stand on the edge to weed!

From colourful gardens to ancient gardens made of stone.
While in Whitby we visited the gothic abbey. 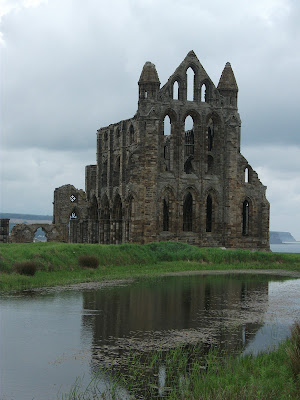 Next to the abbey ruins is the mansion house of the Chomley's a prominent family in Whitby, the mansion was built using stones from the abbey after its destruction in the time of Henry VIII. In front of the mansion is the recently restored 17th century 'hard garden'. 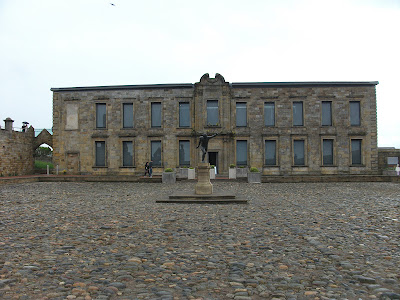 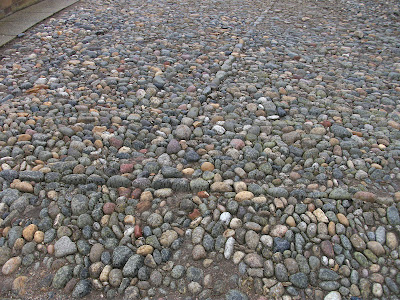 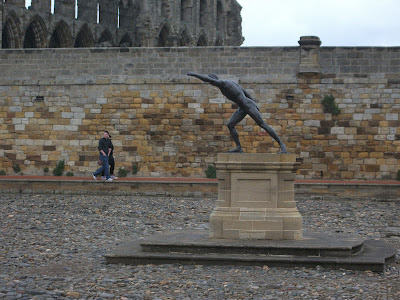 Sir Hugh Cholmley II built the house and courtyard in 1672 and installed a Bronze copy of the Borghese Gladiator in the centre, the original marble statue is now housed in the Louvre, Paris. This statue was often copied in the 17th century.
Not sure I'd like that sort of garden!
The beach at Whitby is a great beach with all the features of a British beach, colourful beach huts, ice cream vans and donkeys. 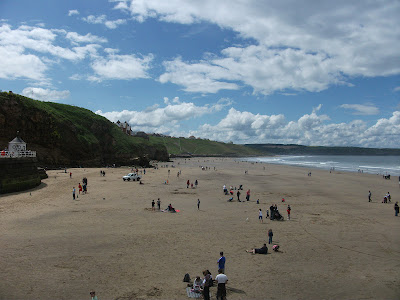 Further along the beach was a mass of a garden escapee, snow-in-summer looking fabulous. 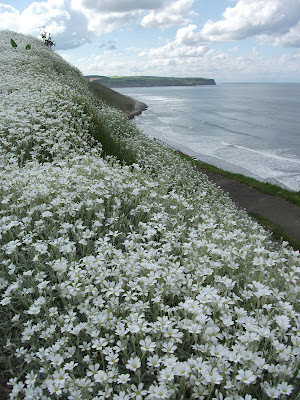 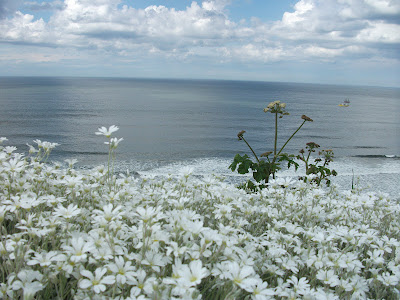 I'd definitely recommend a trip to this coast some lovely beaches and coastal villages, Staithes, Runswick Bay, Sandsend and Robin Hood's Bay. 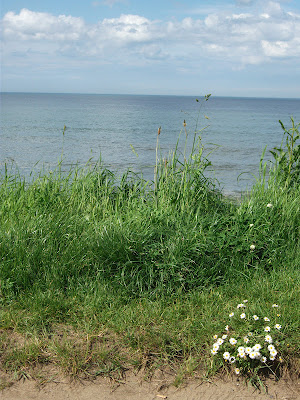