My first trip up to the allotment after my holiday made me realise that we had definitely missed out on the worst weather down in Dorset. Up here in Huddersfield had obviously been very windy, my sweetcorn was all collapsed. 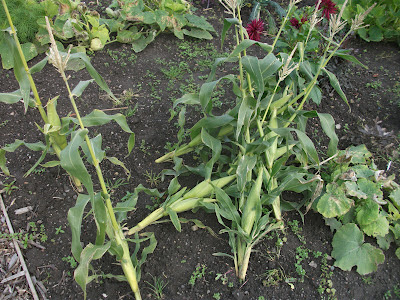 Not a big disaster as the cobs were ready for picking so I just harvested them all and put all the rest on the compost heap. In fact most of the jobs at the allotment at the moment involve either harvesting or filling the compost bin with spent crops.
One of my two wigwams of purple climbing beans had been felled too. 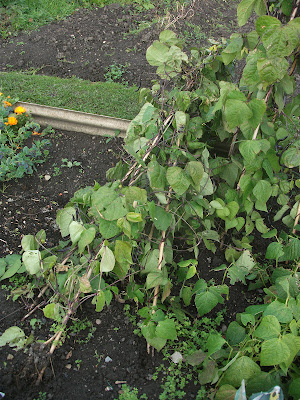 So again harvested what was on there. But I was also amazed to see that there had been a frost while I was away.
All my squash plants had been touched and I had a couple of cucumber plants. 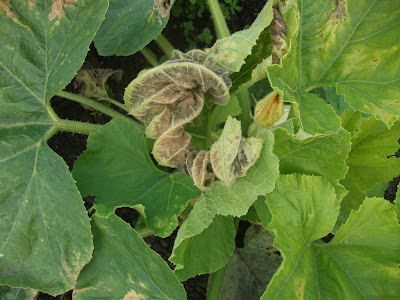 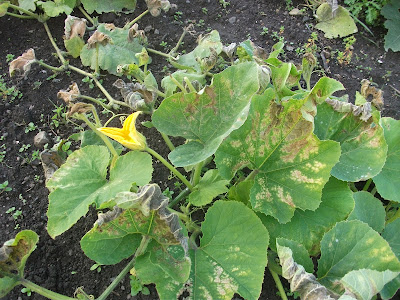 To be honest I wasn't expecting much from them anyway, they didn't get going fruiting till a few weeks ago so there wasn't much hope for any crops. This is after my amazing year of squash last year. I had a table full last year. Though I didn't grow the same varieties this year. I've had some success with the Trombocino squash and I've had a few patty pan squash which you can harvest while still small but no luck with the bigger ones. Will try again next year. The problem was the cold Spring and slugs both combining to decimate my first planting.
My courgettes are still cropping but I think they are nearing the end now.
Lots to do in tidying the plot ready for winter and I want to finish making my paths on the allotment which will involve digging the troublesome buttercups at the bottom of my plot but it needs to be done. Plus I've got some spare glass windows so with some help I'd like to make a coldframe. So plenty to keep me occupied during the winter months.
My green manure that I sowed in September is coming up well now (not the easiest to see on a photo!). 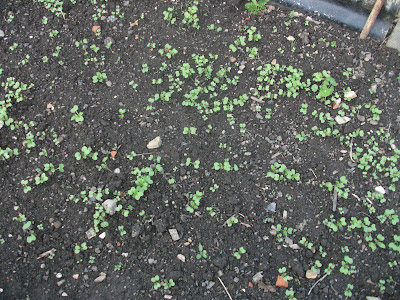 I've got a couple of other beds almost ready to sow some more but I need to get a move on while the soil is still warm. Its the first time I've sowed a green manure but I felt I really need to improve my soil this year. It is an Autumn/Winter Mix so will be hardy through the Winter once sown in Autumn, then in the Spring I'll dig it in and the nutrients held in the plants will be released for the next crop. The seed mixture includes Crimson clover, Broad Leaf Red clover and White Tilney Mustard. Seed from Pennard plants (I love the brown paper seed packets with the lovely illustrations on them!). Well we'll see what happens. It won't do any harm and at least there won't be completely bare soil over winter.