Winding down for winter

Its definitely slowing down at the allotment, but I can't quite get on top of putting it to bed as the soil is so wet.
Its invigorating being up there on a cool day though, the other day I kept hearing the sound of thrushes clicking away, they must be feasting on all the berries and fruit around at this time of year. They are to be encouraged to help with my slug/snail problem! Its still quite colourful on the plot, despite some frosts which saw off my squash and courgettes I've got Dahlias in flower, some Cosmos which is flowering eventually, the Cerinthe has been flowering for months and is still going strong, plus my favourite combination of English marigold and Borage. So I'm still managing to pick a bouquet once a week. But one hard frost and I'm sure that'll be the end of that. 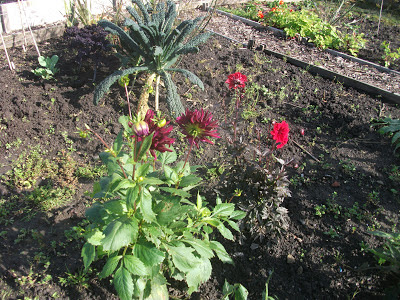 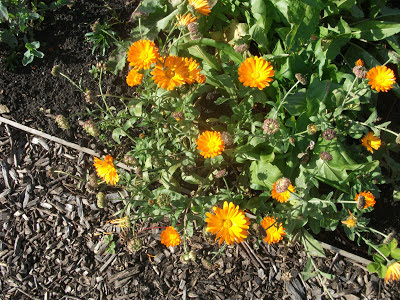 I've got a lovely dark orange coloured nasturtium which is still going strong. 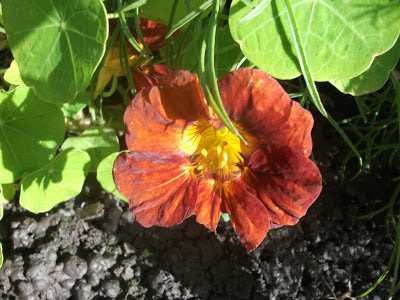 The green manure which I sowed is coming on strong now. I've sowed some more where my potatoes were to try and improve that part of the plot. 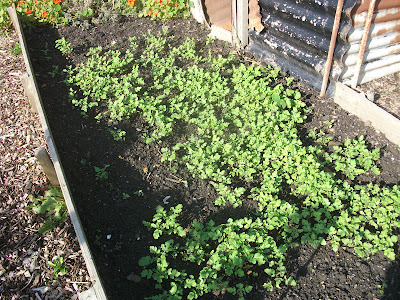 A bit patchy but its ok.
The plot never looks completely empty over winter now, as I've got quite a lot of herbs, fruit bushes and flowers which prevent it looking too bleak. 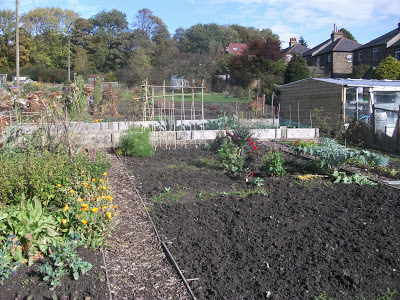 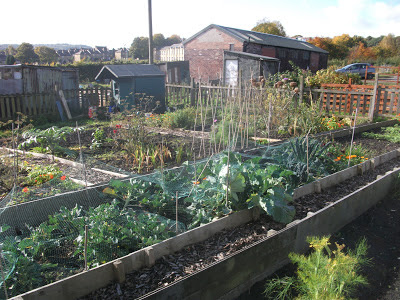 But I guess each time I go I'm clearing more to the compost heap and it will slowly empty. On Saturday I picked loads more heads off my calabrese which are still producing. In that bed are some plants of Romanesco which have grown nice and healthily but have not produced a head. Romanesco is the Italian cauliflower which has a beautiful green head. I picked one last year and tried again this year but I don't think they are going to have a head in time before it frosts but we will see. On the plus side, I have got lots of kale which I'm looking forward to using in Ribollita soup!
My leeks are looking good and I've picked a few already, I think I should grow more next year as I love them and they are relatively easy whatever the weather. 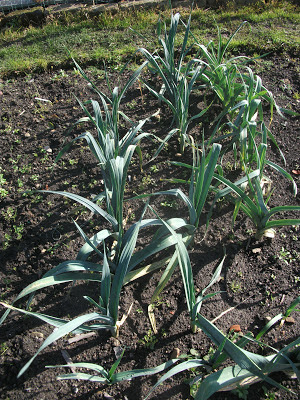 I've planted some garlic before Christmas this year, I'm normally not very organised but thought I would plant some now and plant some in the new year and compare the two. So I've planted a row straight into the soil and we will see how they do. My overwintering onions are sprouting and growing well now. My next job is to sow some broad beans in pots which I can plant out in a few weeks as my overwintered broad beans did better than my spring planted ones this year.
I've got a few winter jobs planned for the allotment this year. I want to put a path in at the bottom of the plot to my shed (which also needs a bit of patching up), I'd like to build a cold frame and also put a bench up there. Having the paths which I put in over the summer has been brilliant, they are so much nicer to walk on than the grass paths round the edges of the plot which are a bit treacherous at the moment. I've got one remaining big bed which needs dividing up as I keep having to stand on the soil to get to some plants, so some paths are needed there.
After the summer we have had I still feel very keen in getting to the plot, I think I'm just making the most of any nice days that we have. It'll only be weekends now though with the clocks changing, there will be no going up in the evening. But I'm not wishing the winter away, I quite like the down time, to plan and renew my enthusiasm for next year, though my heads already buzzing with what I want to do on the plot next year.