My apple trees have been full of fruit this year. 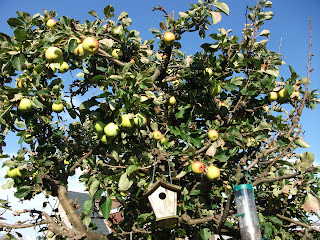 I went to pick some the other day... 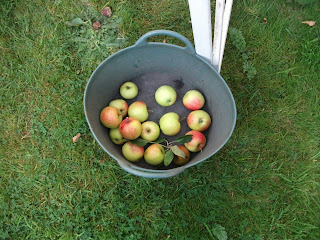 Bob just had to get involved! 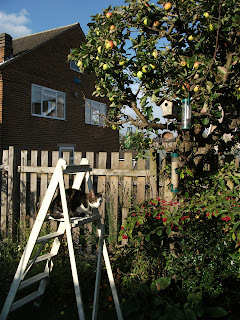 I'm really making the most of my time at the allotment now, with the nights drawing in I don't have as much time there in the evenings. Though its a joy sometimes being up at the plot in the fading light. There have been some lovely pink skies this week in the evenings though I've not managed to catch any on film.
The low light makes for lovely photos and these were taken on the plot last sunday. With dark skies approaching! 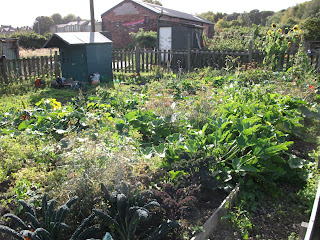 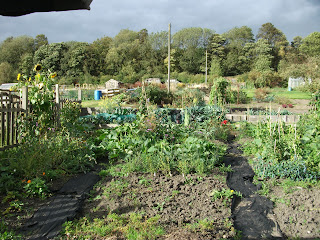 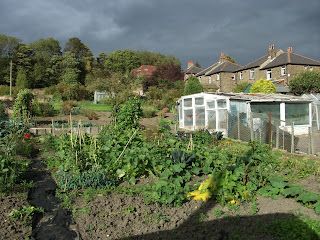 The plot looks very lush. I probably did plant the courgettes, squash and plants in the main bed a bit too close together but it doesn't seem to have stopped them cropping extremely well. I will try and be a bit more organised next year. I'm already making plans now.
Posted by Annie_H at 19:01 2 comments:

Stocking up for winter

I've been drying onions, garlic, freezing the broccoli and millions of runner beans, making chutney and sauces with the inevitable glut of courgettes. Its been a very busy few weeks.
My garlic has been really good, I will grow that variety again, it was called 'Isle of Wight' and I had some nice big bulbs, despite not planting it until 13th March. It was the first thing I planted at the allotment. I've even sold some to the local greengrocer. 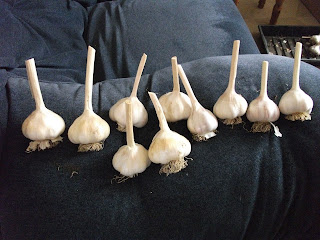 Also got enough shallots and onions to last for a good while. 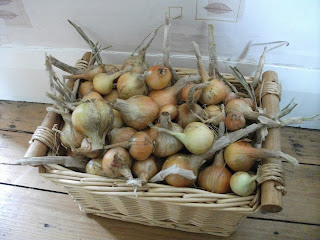 The few Fennel plants that survived are now ready to harvest so I'll be planning a recipe for those plants in the next few days. In the photo you can also see the parsnips which have big leaves now, I'll leave them a bit longer though, they are said to taste sweeter after the first frost. 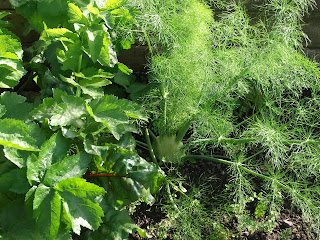 I have harvested a couple of leeks, they are huge, really thick. Though actually the white part is not very deep, I'm not sure whether this is the variety or the fact that I didn't put them deep enough in the soil. But they are delicious and will be cropping those well into the winter. 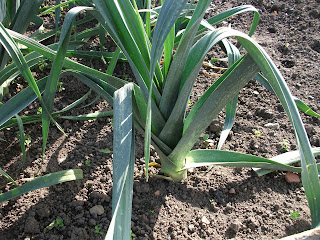 But the crop I'm most excited about at the moment is my squash. I put in a few plants which have trailed over the plot in different directions. I planted 4 varieties, Hubbard Blue, Crown Prince, Buttercup and Ponca. The best grower was the Hubbard Blue, I've got about 6 squash fruit that have developed one is bigger than rugby ball size now, has turned a grey colour and I think this is ready for harvesting now. The Crown Prince has also grown well and I have about 4 squash fruit on these plants. There is just one Buttercup squash and the Ponca has not done very well either, the fruits are still very small so probably won't be ready in time. I sowed them all undercover at the end of April, potted them on until they were a good size and then planted them out in mid June. 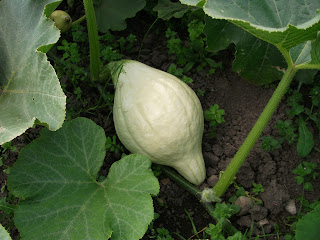 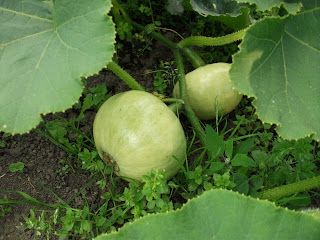 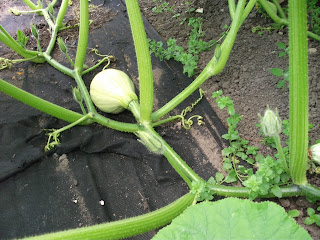 The above pictures were taken at the end of August and they have grown and changed colour a bit since then. I might try harvesting one next week.
The council have dumped another big load of bark chippings at the allotments and I want to make sure I don't miss out on them this time, I was too slow last time. My paths have really suffered this year and have become full of weed. So I cleared the weeds off the top path this week and have topped up the bark chippings. the paths are very deep now but it will compact. I had a willing helper! 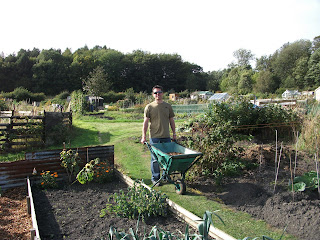 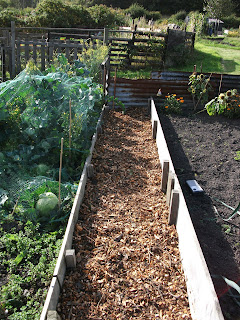