A couple of weeks ago it was my 'local' flower show in the beautiful Tatton Park in Knutsford. I think I've been to nearly every one since it started and its been going a few years now. Its the northern show and I think it is slightly different from the other shows. For one its a high summer show with all the amazing floral displays of this season. It focuses a lot on the smaller gardens, with many back-to-back gardens which really give lots of ideas for urban gardens. It also has the cute flowerbed competition which continues to astound with the inventiveness each year.
I'm not going to go through all the gardens but just show some pics with ideas for the plot in this post. And for the garden in a separate post.

So first some ideas for the plot.
How about this for a cute little polytunnel and looks reasonably easy to put up at the allotment. 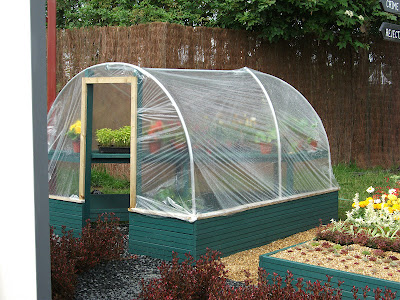 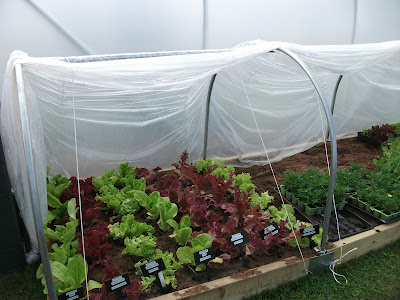 The above one looks even easier, there was a catalogue to buy this, this was on the Manchester allotment society stand and I got chatting to one of the blokes there and he suggested an even cheaper option from B&Q (or another DIY shop!), buy blue tubing, and the brackets which you can attach to a raised bed and cover with polythene. Not quite as sturdy as this but much cheaper. That may be something for me to plan for next year at the allotment.
Here's an idea for growing strawberries. 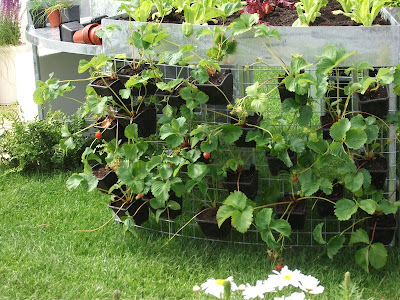 It would keep then out of the way of slugs, though they would dry out quickly in those small pots.
This was part of a whole bench for growing vegetables and salad. 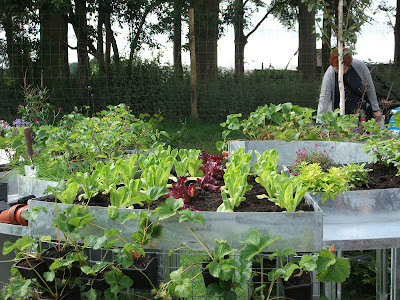 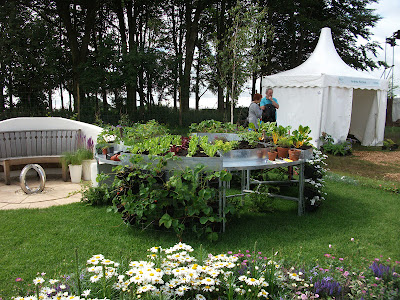 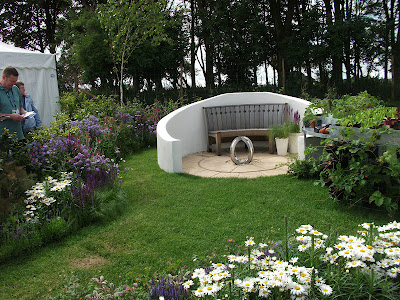 Not sure that it fitted in with the style of the rest of the garden but an interesting idea.
If you run out of space on your plot try growing up the wall! 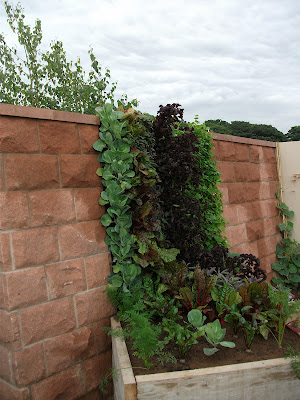 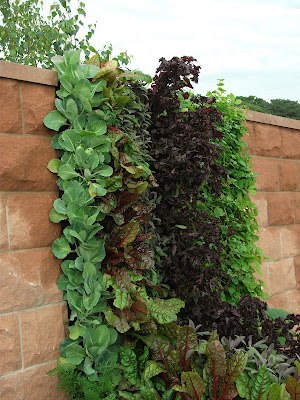 I'm very skeptical about how long it would stay looking like this and another challenge for watering.
Then after all your hard work on the plot how about this.... 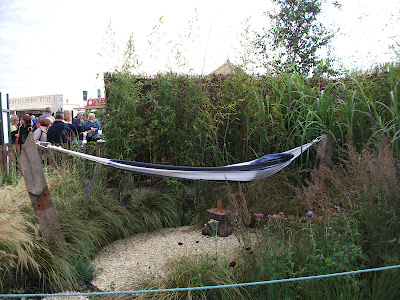 Good job you can't smell this

I've been creating my own plant feed on the plot this year, I was given a root of a comfrey plant from a gardening friend and its grown well this year. A few weeks ago I put some leaves into a bucket with some water and left them to rot down. I've started using it this week and phew what a whiff I had to apologise to my plot neighbours. But the black stuff is a great feed once diluted (roughly to a pale straw colour according to Bob Flowerdews Organic bible). Its high in potassium as well as nitrogen so good for tomatoes. 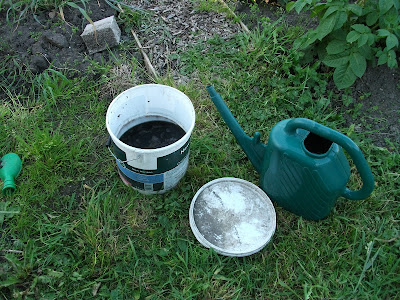 According to Bob you can also use the same technique using nettles which its claimed also makes plants resistant to pests and disease especially if sprayed on as a foliage feed. I've got lots of Borage on my plot at the moment (I love the blue flowers) this produces a feed that is higher in nitrogen which is good for hungriest plants like brassicas and squash. I might give this a try too. I'm not going to follow all of Bob's suggestions for liquid feeds though as he also suggests using diluted personal liquid waste, ummmm think I'll give that a miss.

I managed to persuade Martin to help me on the plot normally giving him the heavy jobs but this time he was chief potato digger. These are the first earlies 'Pentland Javelin' not a huge crop but they all look healthy. 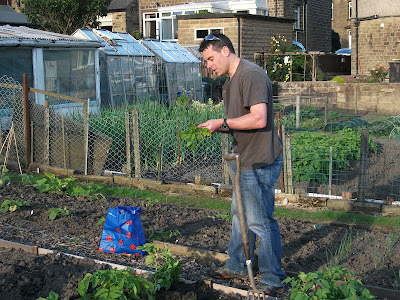 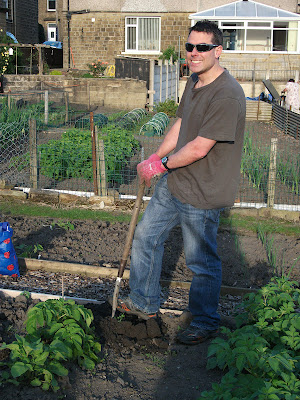 He's far too cool for my allotment. Though what his mates will think of his pink gloves......

I've not done a post on my allotment for a while and my last post was a bit depressing with all the rain and slug damage at my plot so I need to do a more positive update. This is difficult with the rain still hammering down outside and no end in sight of this rainy summer. But I guess it is saving us having to water our plots plus I hear that the hosepipe bans have been removed (not that they affected us here in soggy West Yorkshire).
I'm still trying hard to keep on top of the weeds which has been difficult in the last few weeks as I've been down to London for a few days to watch Wimbledon (saw the amazing match where Nadal got knocked out!) and the weather has conspired to be awful on any of my free days. But its definitely better than last year when annual Euphorbia was taking over my plot. I'm trying to keep them cut down early this year to stop them flowering and seeding. Wimbledon time also means strawberries but I've been having a battle not only with those slug beasties but with the birds for my fruit this year. I assume that its the birds as there are random strawberries left on the strawberry patch, picked off but then only half eaten, how frustrating. Another area which will need netting next year! 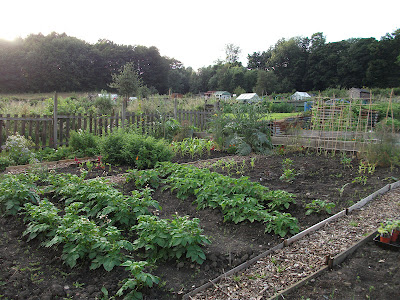 Whilst I have been wise to the pigeons (and I think magpies are a problem too) destroying my brassicas this year, these have been netted right from the start and now seem to be growing and many have survived the inital slug attack. 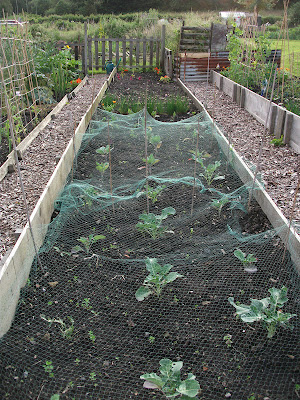 But I've had to abandon my spring sown broad beans which never got going and I realised that they were being attacked by the birds, so they ended up on the compost heap. Soon everything is going to be netted on the plot! My autumn sown ones did ok though and I had a reasonable crop from them so I will sow some again this autumn.
I have had some success though, been harvesting my peas. 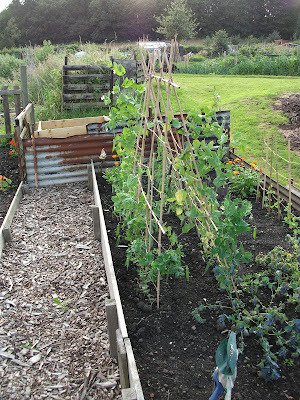 My autumn planted onions have been great, some are huge. They were 'Electric Red' and I'll be buying more of those sets when I go to the Southport Flower Show later in the year. 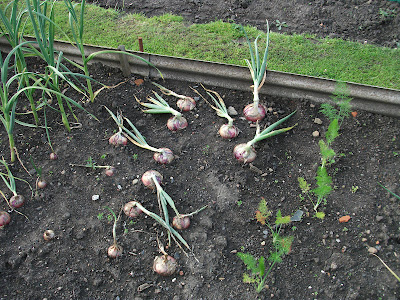 The garlic looks nearly ready for harvesting and the onions and shallots are coming on well. 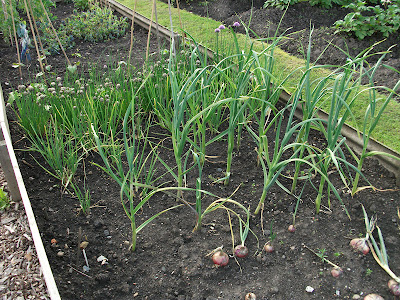 The sweetcorn is coming on, just need some warmth and some sun, in short supply so far but I live in hope. 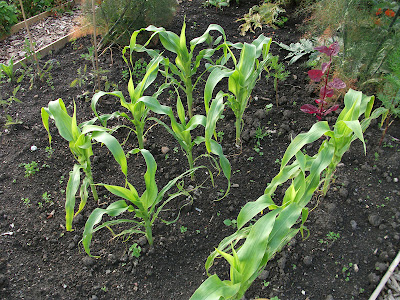 My second planting of courgettes and squashes are finally getting going and I'm hoping for some crops soon. 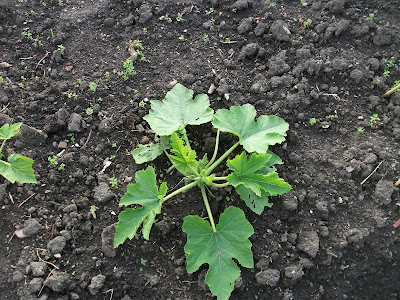 I'm also hoping my potatoes are surviving all this wet weather, plan to dig some of those up soon. 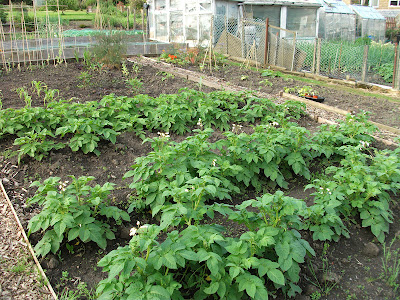 The paths that I have put in have really made a difference and I think I may put some more in next year to divide it up a bit more. 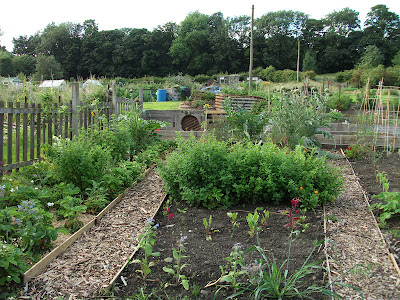 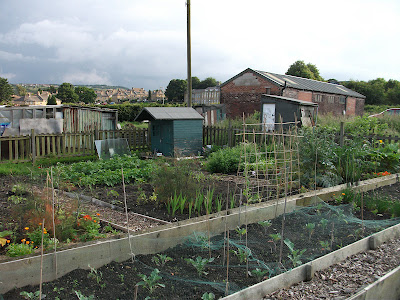 The crops that I've really failed with this year are the root crops, I've tried sowing radish (supposedly one of the easiest of all crops), carrots, beetroot, parsnips and all have either not germinated or eaten by slugs. I've also tried direct sowing of spring onions and salad leaves and again no success. I think I'm just going to have to leave these to growing at home in the garden where I can be more vigilant about watering and slugs.
But to end on a positive note I've harvested by first gooseberries and redcurrants this year which is very exciting.
I was very chuffed to hear a few weeks ago that my plot had been chosen along with 4 others from our site to go into the "Best Plot" competition as part of the Huddersfield Allotment and Gardens federation, judging was on Wednesday 4th July. Apparently 4 judges from the federation went round all nominated plots, across all allotment sites in Huddersfield on that day but I'm not sure what the criteria for marking is. There are some amazing plots just on my site so I was pleased to be even nominated as this is only my second year and there is still so much to do. But it was just nice that people recognised that I've worked hard on my plot this year. The winner was a chap on our site which was brilliant, he has any amazing plot. Our site was given an award for the most improved site across Huddersfield, which is great. We have established a committee this year and we have been working to try and improve facilities and communication between plot holders so we were chuffed with that.