I'm a bit late posting about this, the show was in September, but I wanted to let you know how our allotment show went, its our second one. Last year for our first one we could just bring a basket or collection of any vegetables, but this year the committee set a few rules. This year we had to exhibit a basket/tray of six different vegetables from the following list. I hope you can read it, its not copied very well. 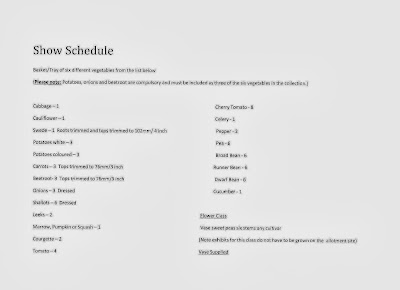 But the important thing to remember was that there were 3 compulsory vegetables of potatoes, onions and beetroot. This caught a few people out who looked at the schedule a week or so before the show and then realised they'd not got any beetroot left!
So I had some potatoes ready, they were 'Charlotte' variety, a few beetroot, I entered some 'Chioggia' variety and some onions, they were 'Stuttgarter Giant' which I'd lifted and dried a few weeks before. I still can't believe I actually spent a whole evening puzzling over how to trim and tie onions, even googling to get some expert advice. As for the other 3 vegetables to show, when it came to the week before I didn't really know what to enter, I was a bit spoilt for choice, I had some quite nice long runner beans, some 'Longnor' shallots, some nice french beans, a cucumber, which I was very proud of (my first proper attempt and grown outdoors), a 'Crown Prince' squash and some nice round courgettes. In the end I chose the french beans, cucumber and squash. 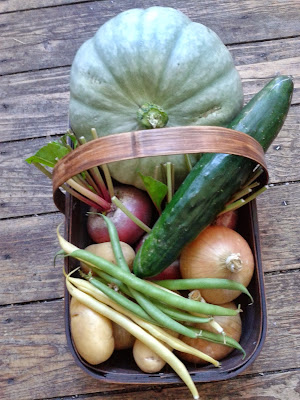 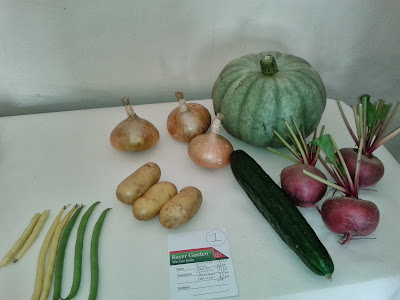 I think from speaking to the judge and other competitors afterwards I made the wrong decision as its apparently very hard to get a good mark for cucumbers, they have to be immaculate and squash are 'easy' to grow so again don't get good marks.
These were my scores, my best was for the potatoes, 15/20, then onions, 13/20, beans and beetroot 11/20 and the cucumber and squash both got 6/20. But for me its all a bit of fun and just really about taking part and getting together with the other plot holders and having a bit of a natter. We also have a few awards for most improved plot and the plot holders next to me won that which is great as they have taken over a really grotty plot and have turned it round in a few months. Then we also have lots of tea and cake which is the best bit.
Here are a few of the other exhibitors. 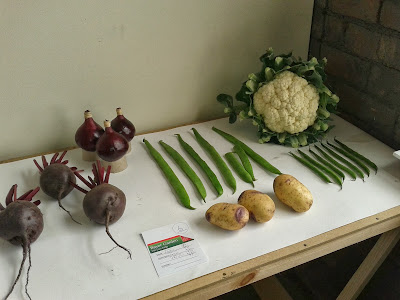 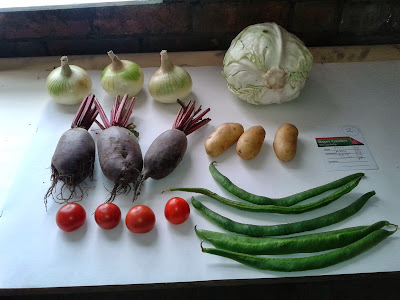 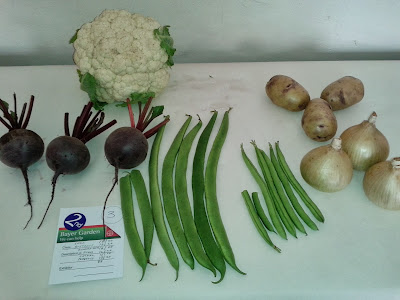 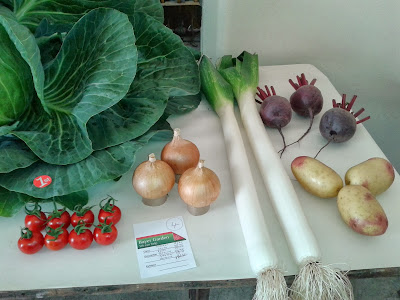 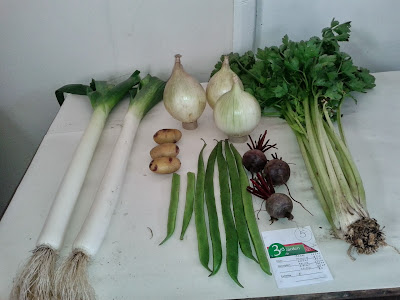 You should be able to see which ones came first, second and third. I really wish I'd put the shallots and runner beans in now! Oh well maybe next year. The standard is quite high as many people from my allotment site grow for the Huddersfield show amongst others. Especially our chairman who won best in show for his leeks. They all get very competitive. I might suggest next year having some tasting competition perhaps with tomatoes. We'll see, anyone else got any ideas for us from their allotment shows?

I did win something though third prize in the sweet pea competition. 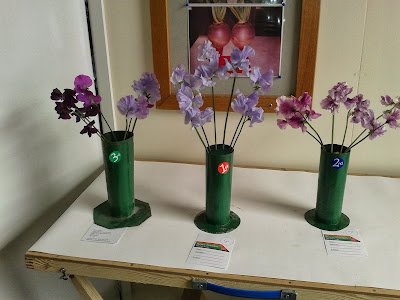 I won't let it go to my head though, there were only 3 entrants!! 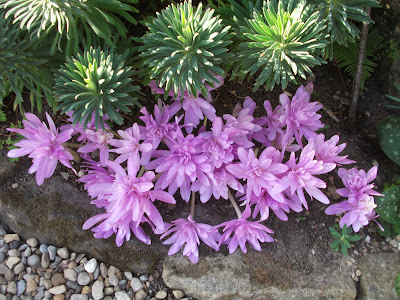 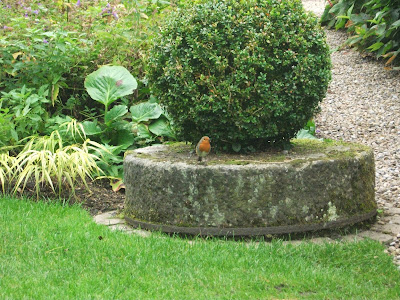 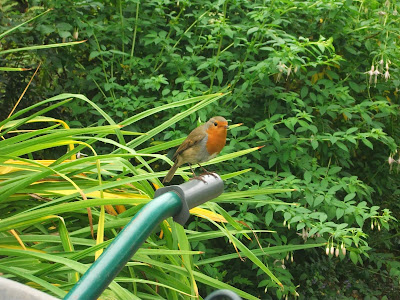 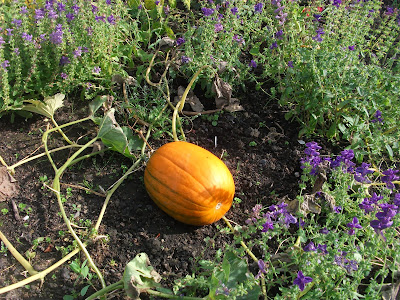 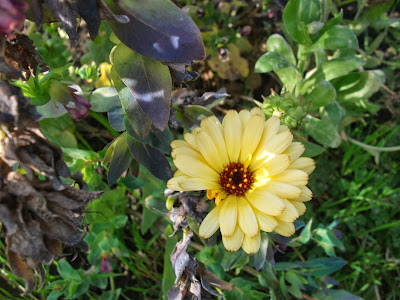 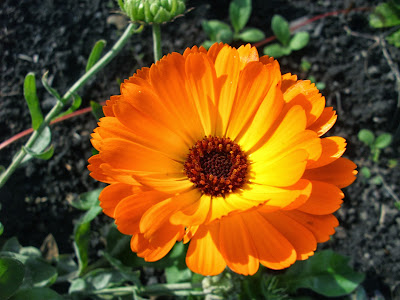 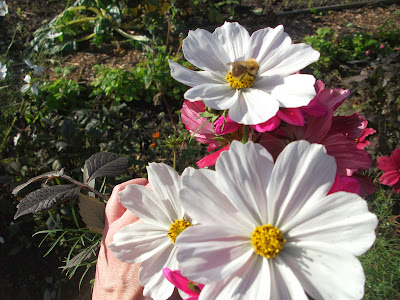 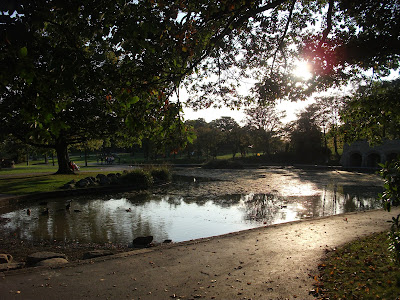 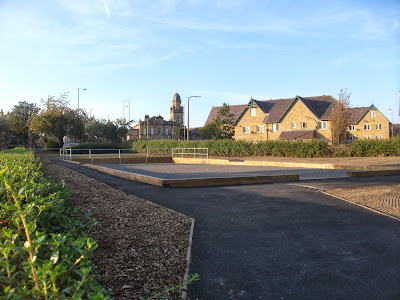 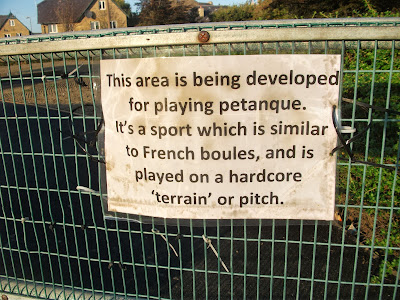