Hasn't it been a funny old summer. I don't know about you but I feel like my plot is just about getting into gear and its probably going to be cut down in its prime with the talk about cold nights this week. Slow is the operative word and anything that prefers a warmer summer has struggled for me this year. I was at the plot most of Sunday and it was glorious weather, here are a few photos of it now. 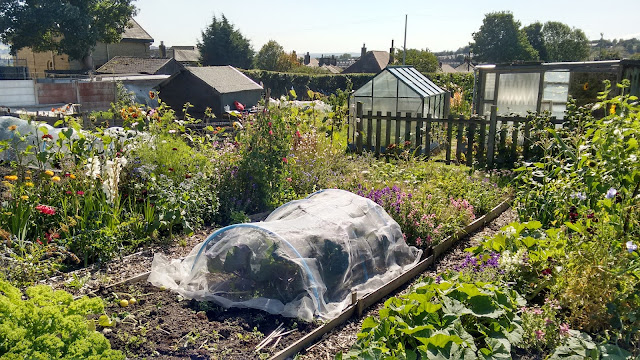 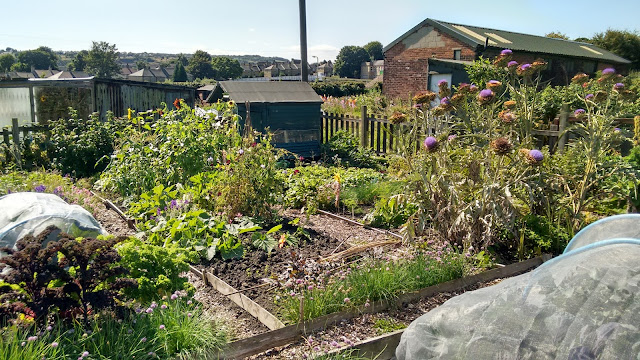 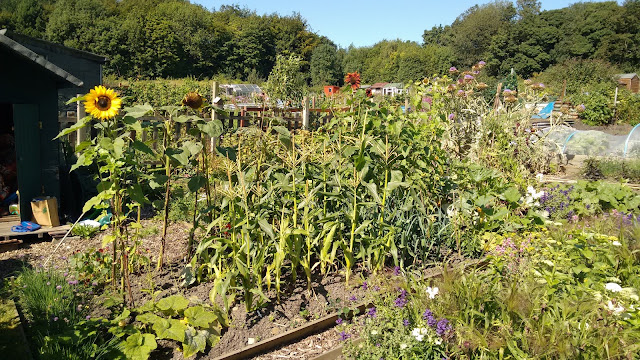 Last year I had masses of cucumbers grown outside, this year, they just sat and sulked in the ground and then were the target of slugs. Two measly little yellow cucumbers. Courgettes have even been slow and I've probably had just the right amount of courgettes (usually am overwhelmed by the glut and end up giving lots away). Squash usually romp all over my plot and given a few more weeks probably would again but I don't think I'll have too many fruit this year. Even my runner beans have been slow, masses of flowers and beans now which is frustrating but I should still get a reasonable crop. But it amazes me every year how different it can be. Hence my ploy which I stick to of growing a range of vegetables so that I get something for all the hard work. What has done well after all my whinging, well I've had a good crop of onions, shallots and garlic, roots crops like beetroot have been OK, lots of spinach and chard, calabrese and kale. I'm hoping my sweetcorn crop will be good and I've got lots of leeks to come, plus still got sprouts, broccoli and cabbage, though have had a few 'issues' with that, have been trying to protect my Brassicas by using proper good netting called Enviromesh (its not cheap!), this is to largely try and stop the cabbage white butterflies, I was sick of searching for caterpillars amongst the heads of calabrese!! It also prevents whitefly to some extent and then obviously the much larger pests, the pigeons which are a problem on my site. But it doesn't stop SLUGS!! 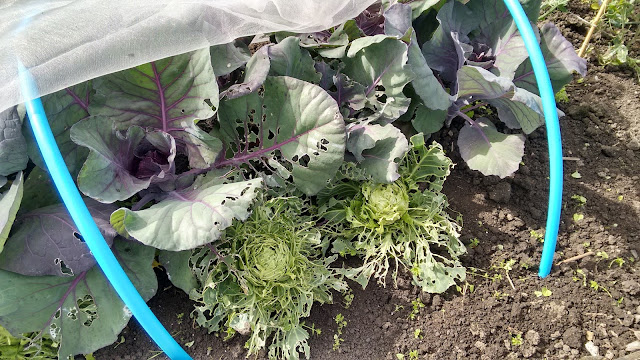 So I have lovely filigree cabbage, now consigned to the compost heap! They don't seem to have gone as much for the red cabbage (they were too busy with the white!). The problem I think for me is that because of the cover I wasn't weeding it as well and this creates more of a haven for slugs and snails and well another lesson learnt.
On a more positive note, my fruit crops have been amazing, loads of gooseberries, red and blackcurrants and strawberries. I've harvesting masses of blackberries and my raspberries have been the best ever this year. I grow blackberries along my fence, they pop out the back and I have raspberries at the front of the fence. I've taken some hard wood cuttings of one the blackberry bushes that are along here (the one which is thornless!) and have three new plants so plan to replace the vicious thorny one with one of these and then put the other two plants along my other fence.. 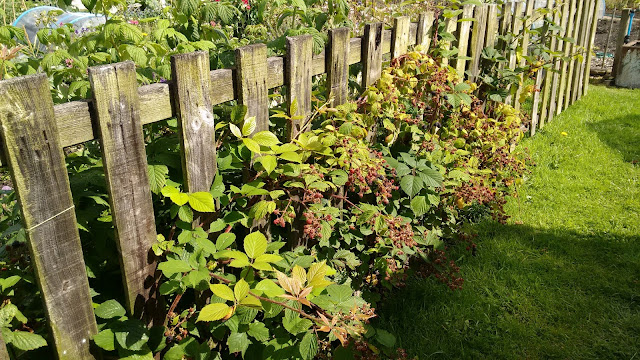 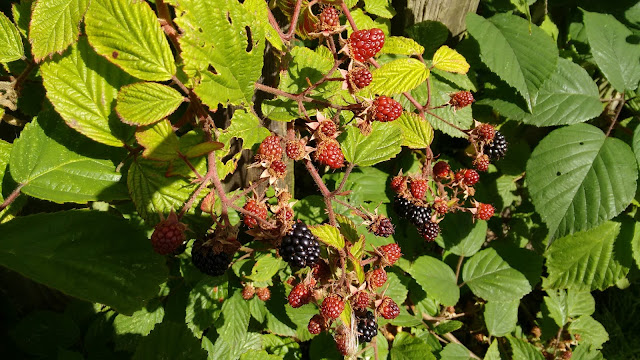 But its my cut flower patch that has given me the most joy this year and its still looking great even if I say so myself. 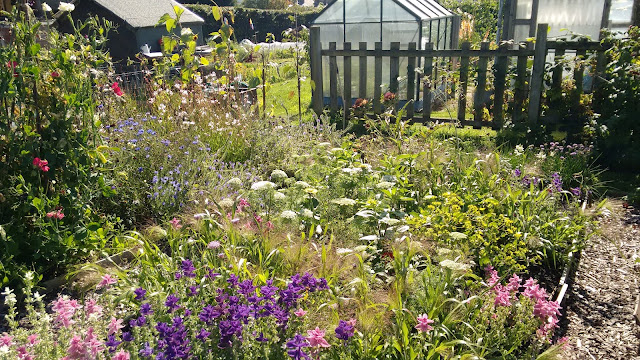 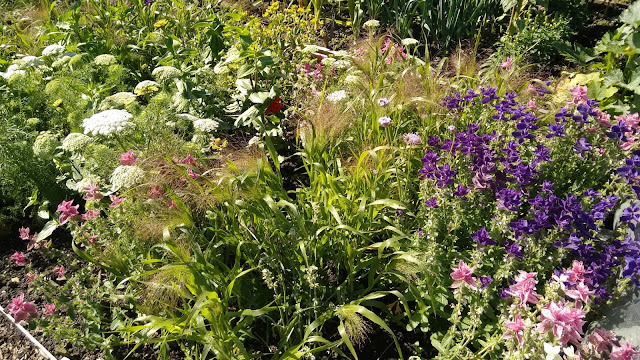 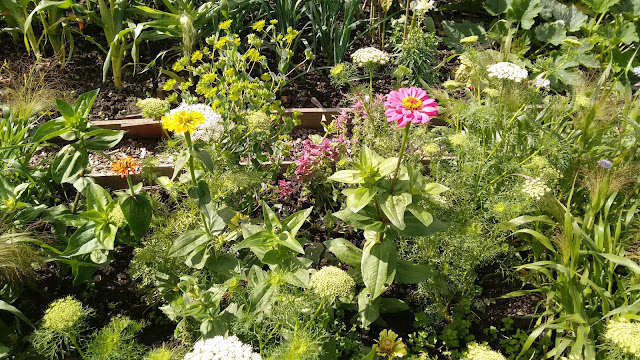 This is the bed that was newly created this year as overspill!! Jostling together here are Salvia Bouquet Mixed, which is a mixture of the blue, pink and white forms (I have to say I much prefer the blue form) and it lasts for ages. Really good doer. I have a few plants of Didicus 'Blue Lace', the absolutely gorgeous Panicum 'Frosted explosion', a revelation to me is Ammi visnaga 'Casablanca', there is Bupleurum for foliage, a few Zinnias which haven't flowered prolifically but they last ages in a vase, Nicotiana 'Black Knight' and some white Snapdragons. This is the more sedate part of the patch. The other main bed has the larger more thuggish plants, the cornflowers, Cosmos, Amberboa, Gaura, Sweet peas and sunflowers. I'm still very much experimenting with the planting of the annuals and realising some just can't cope in this bed. The Nigella I think will need to be put somewhere where they don't get overwhelmed and I grew a lovely Gypsophila 'Kermesina' which grew well initially but then got a bit overtaken as well. Some plants in the main bed are starting to go to seed now, like the cornflowers, Amberboa, Cerinthe so I'm trying to take lots of bags with me when I go up to the plot to collect seed to save me money for next year. Like last year I've edged the bed with sunflowers though I might rethink this for next year as it does make picking from one side more difficult!! I'm trying to get pictures of them all so that I can assess which have been the best. I'm going to do a proper review of my cutting patch later in the year so that I can decide what to grow next year, though I've already been tempted by a special offer from Higgledy Garden and ordered some of the annual rudbeckias for next year. I'm also planning on sowing some hardy annuals anytime now to try and see if I can get a head start next year. First on the list being Echium 'Blue Bedder' which has flowered non-stop since May and looks lovely here in combination with Calendula 'Coffee and Cream'. 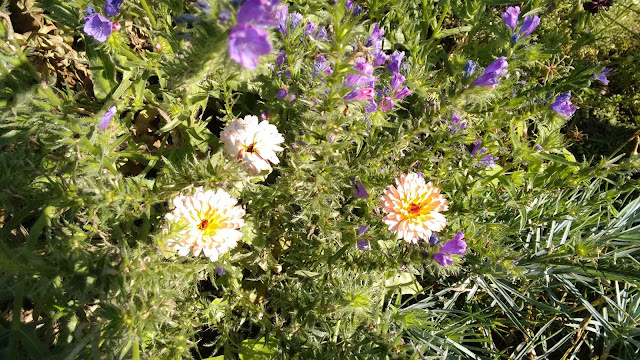 Another brilliant plant this year has been the Scabious black and white mix, which has flowered for a long time and the flowers have really long thick stems. I've also grown Scabiosa 'PingPong' which really is grown for the lovely seed pods, you may see one amongst the others here. I only ended up with one plant of this and it got a bit overwhelmed by the Cosmos. Another lesson learnt. 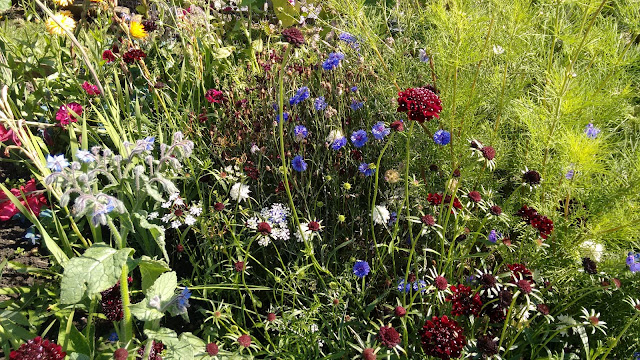 Anyway I must stop now, could talk all day about my cutting patch. I'm going to have a post showing some of my arrangements soon.
At home, my greenhouse has been full to bursting all spring and then over the summer I've had a great crop of tomatoes in there. The same varieties that I grew last year 'Sungold' the sweetest tomato ever, Martin never really gets many of those as I just eat them like grapes straight from the plant. But also 'Lucciolo' which is a small red plum tomato but I like it as it crops over a long time, not all ripening at once and it tastes good. I have two plants of each variety. I feel like I should be experimenting with other varieties but I don't have much room, I may try and squeeze in another pot in next year and try a new variety. I've also successfully grown Aubergines this year, a dwarf variety called 'Ophelia' which produces small almost perfect size fruit. Not hugely prolific and again slow growing but I've had three fruits so far. I also have some chillis which I'm urging on to ripen. Must mention Martin and our friend Bob who put the greenhouse up for me over a chilly winter a couple of years ago. couldn't do without it now, and need a bigger one. But that may necessitate getting a bigger garden!!