I know that I said that I wasn't go to say this every blog post, but where is the time going!! This year is going by far too fast. I've had a manic few weeks and there is a lot to catch up on, the weather has been reasonable too, sunshine and showers so perfect growing weather and plants are moving on fast, what a difference from the cold spring of last year.
I've been getting used to my new greenhouse, previously many of my seeds have been started on the propagator on the desk in my small bedroom, which gets lots of sun, and then moved outside into plastic greenhouses and I had got surprising efficient at planning my sowing and moving things on. It was amazing the amount that I grew. Now I've got the greenhouse I'm having to get used to slightly different conditions, my struggle really is that its not heated so can go cool at night but then its getting quite hot during the day. Fluctuating conditions which aren't great for plants but I think I'm getting there now. I'm having to be a bit more patient as some things aren't germinating as quick as when inside but they are growing and I'm starting to get a routine going now. A big thanks to our friend Bob for putting that up, he's also just fixed the automatic window that opens when the temperature gets too hot which helps keeps the temperature more stable. So here we are, brightened up with some beautiful bunting that my friend Amy made me for my birthday a couple of years ago. 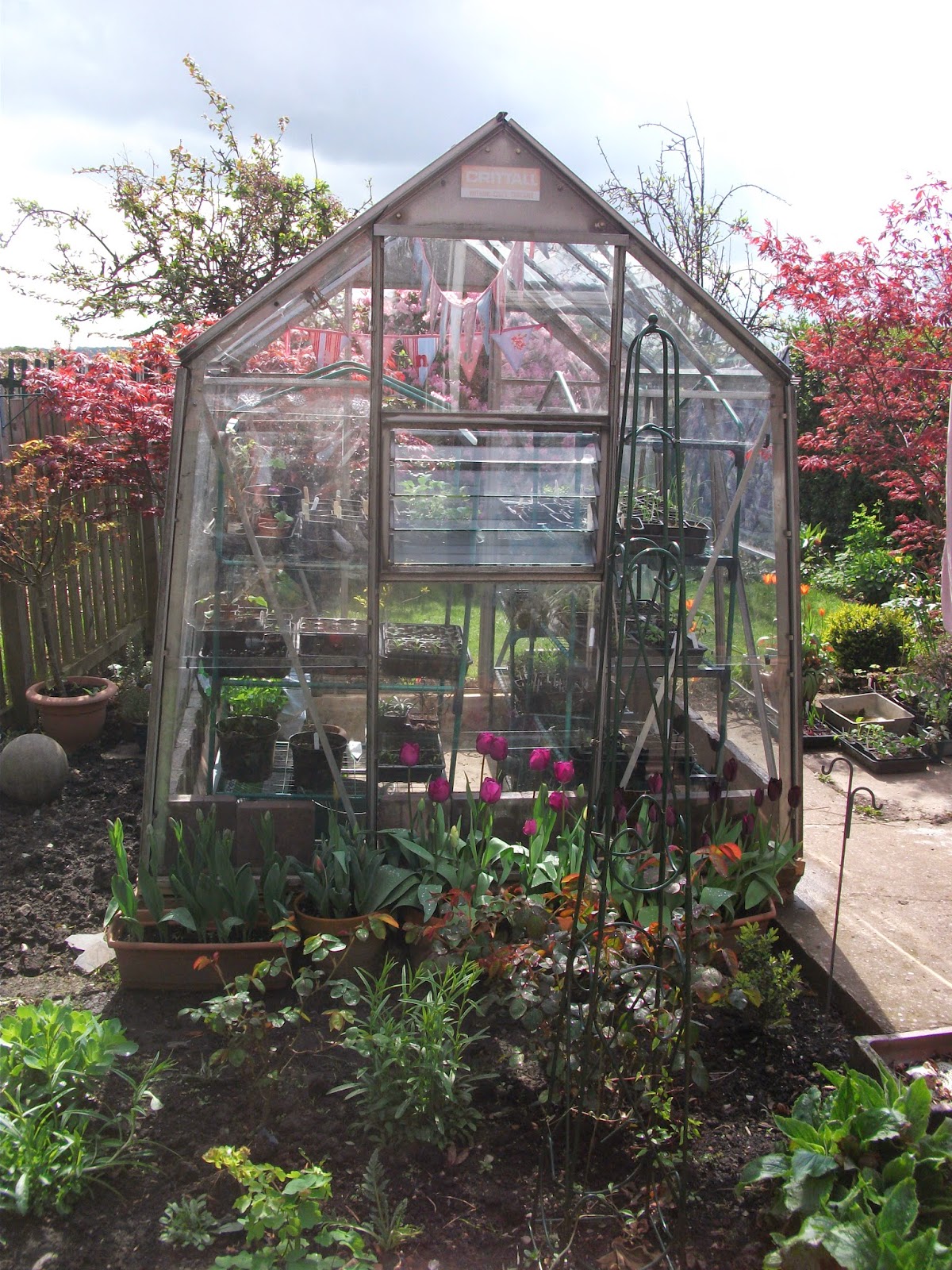 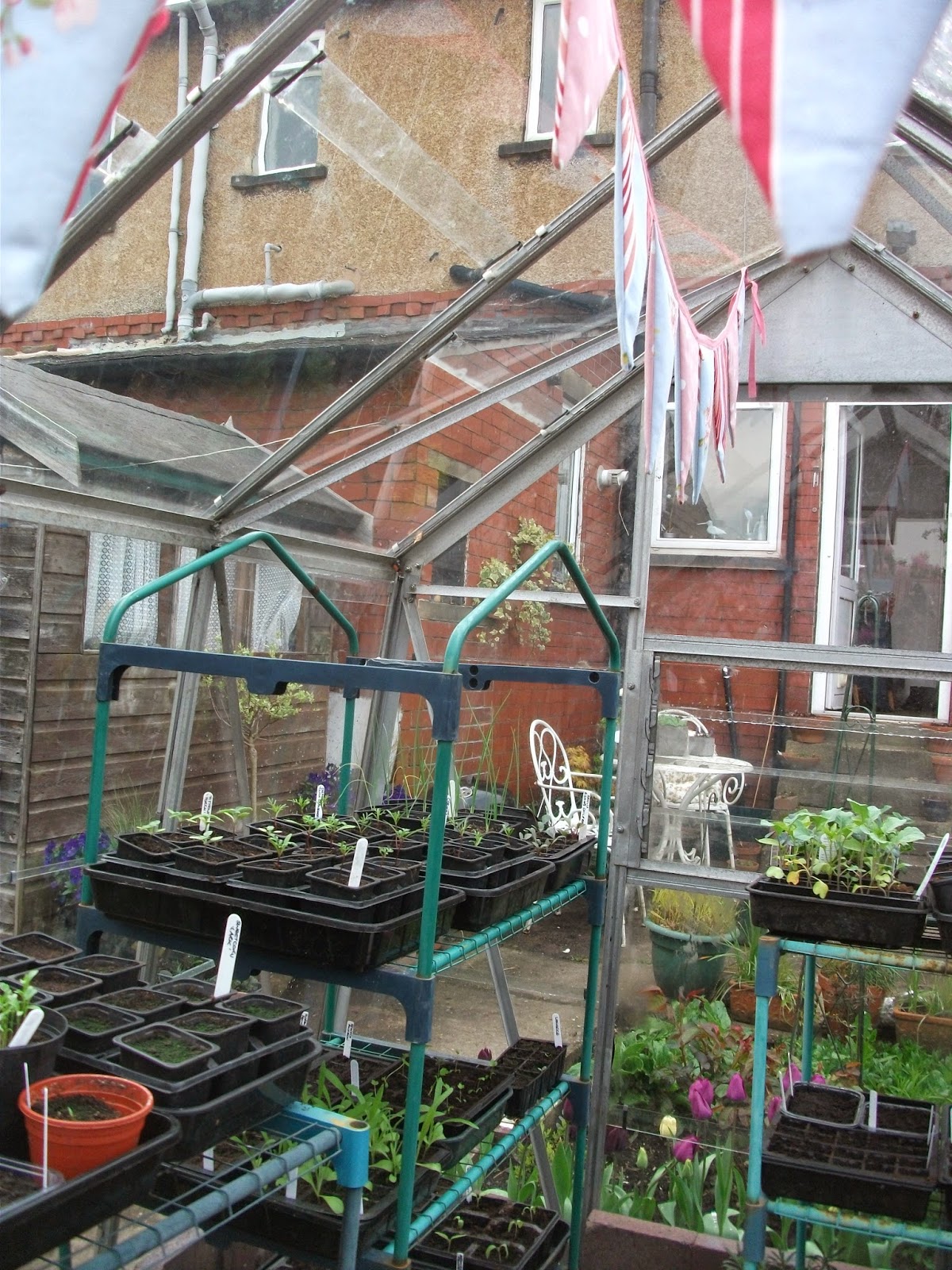 As you can see I've used the frames from my plastic greenhouses inside so I've got quite a lot of space, though its getting full now. I've still kept one plastic greenhouse outside to act as a coldframe for hardening plants off.
My plans to cut down the laurel hedges at the side of my house have been put on hold as there is a blackbird nesting in one of them. Though I'm a bit worried about this as its not a very high hedge and my cat, Bob, though getting on a bit now used to be quite a predator. Maybe I should have just stopped the blackbird nesting there and hope it would find a better place for a nest?!
At my allotment I'm actually on top of things which is unusual for me at this time of year, all beds are ready and dug over. The paths on my plot are all made of wood edging filled with bark chippings of which we used to get a regular delivery to the site. However due to a dispute between the council and the school, of whose grounds our site is situated, we are not getting any delivered any more (might be something to do with the fact that when they were delivering one time, they knocked a stone finial off the main gate to the school!). Our allotment committee have been complaining about this but have been told that if we want bark chippings we have to go and pick them up ourselves, so I spent one morning last week at Lockwood cemetery where the council have a big pile of chippings, bagging them up. I filled my car with about 15 bags but I needed to do two journeys to get enough chippings to fill my new path and to cover the area near my shed which was looking very messy and which I'd put down black plastic. I think it looks a lot better. 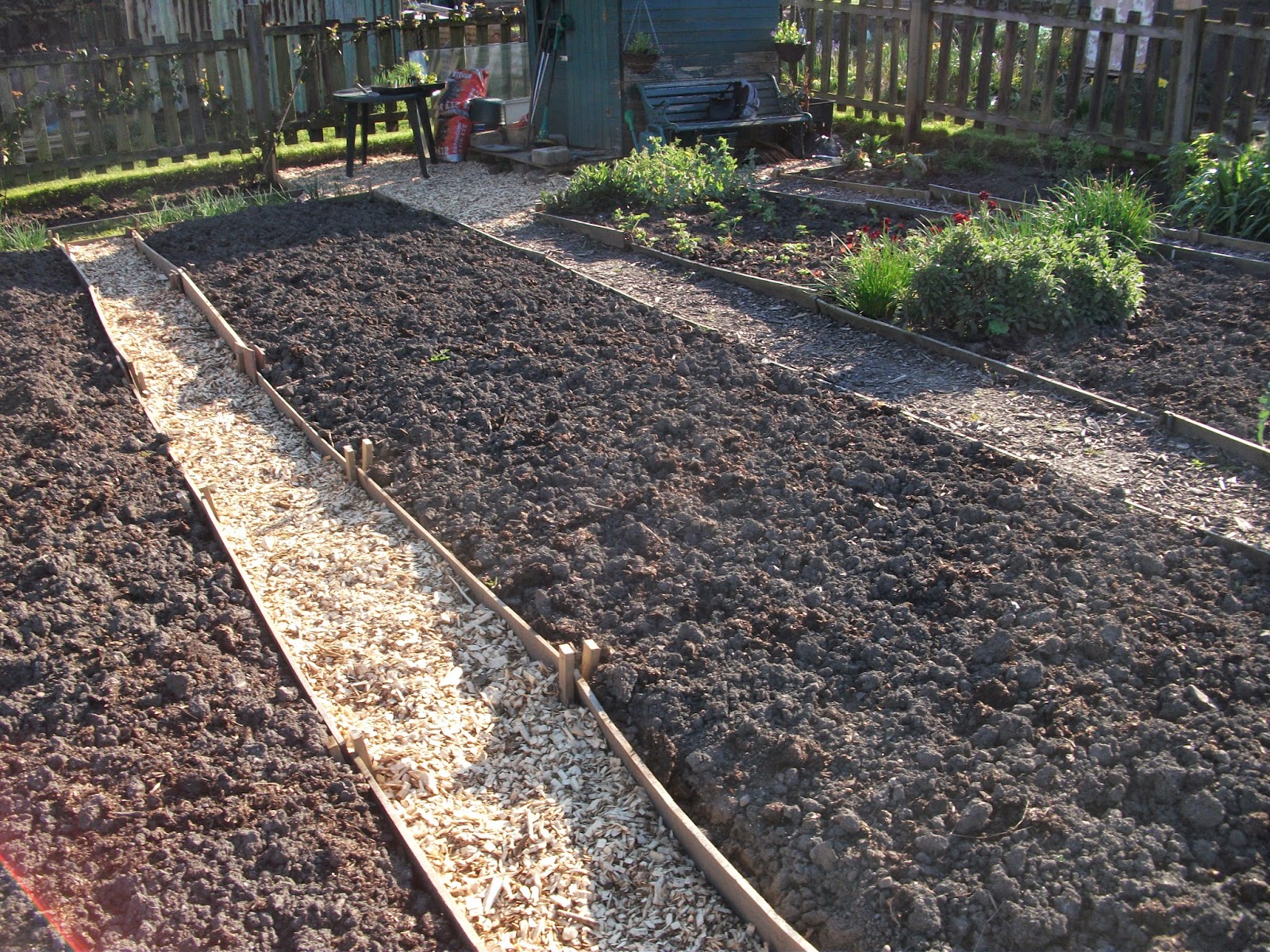 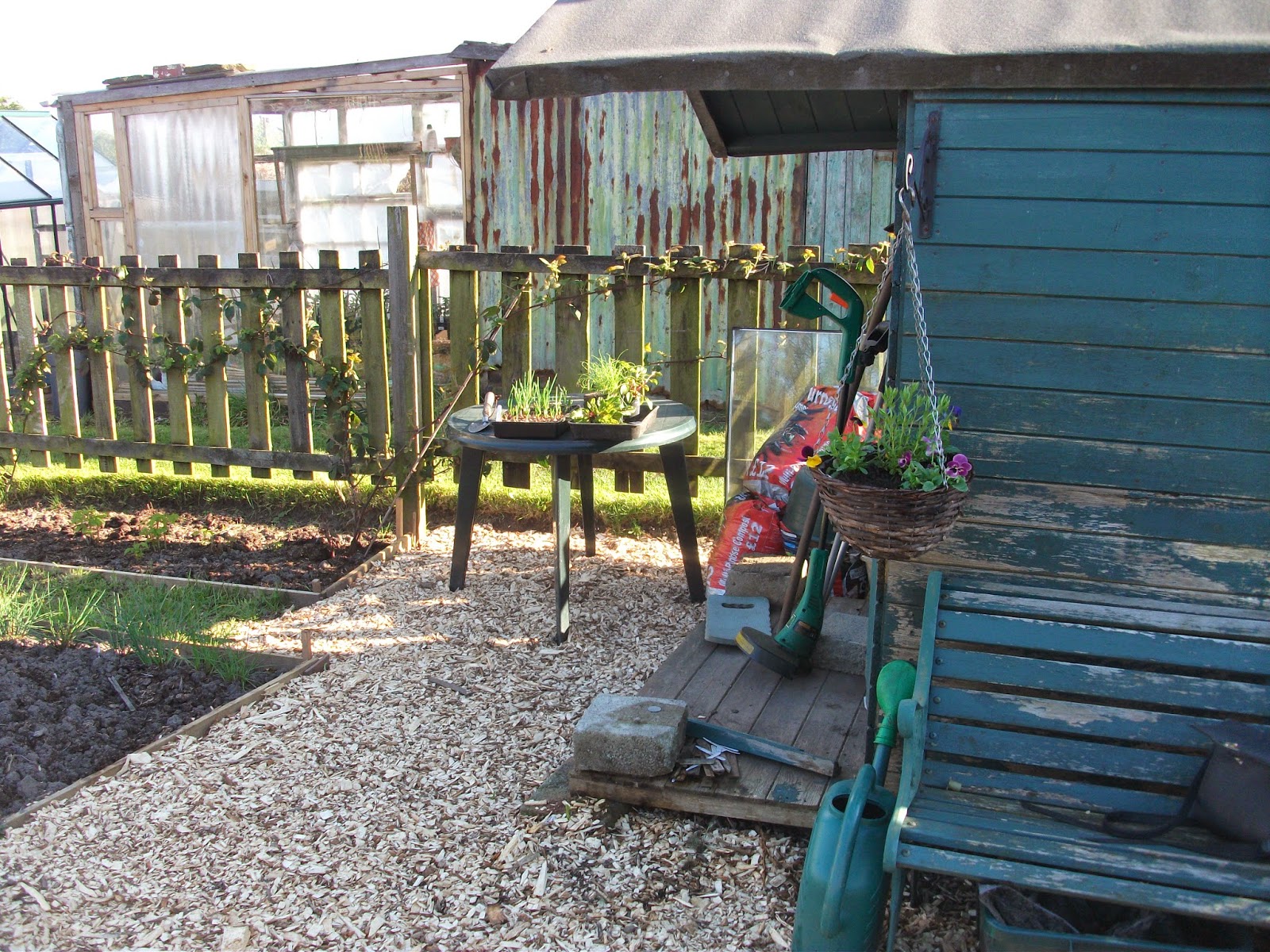 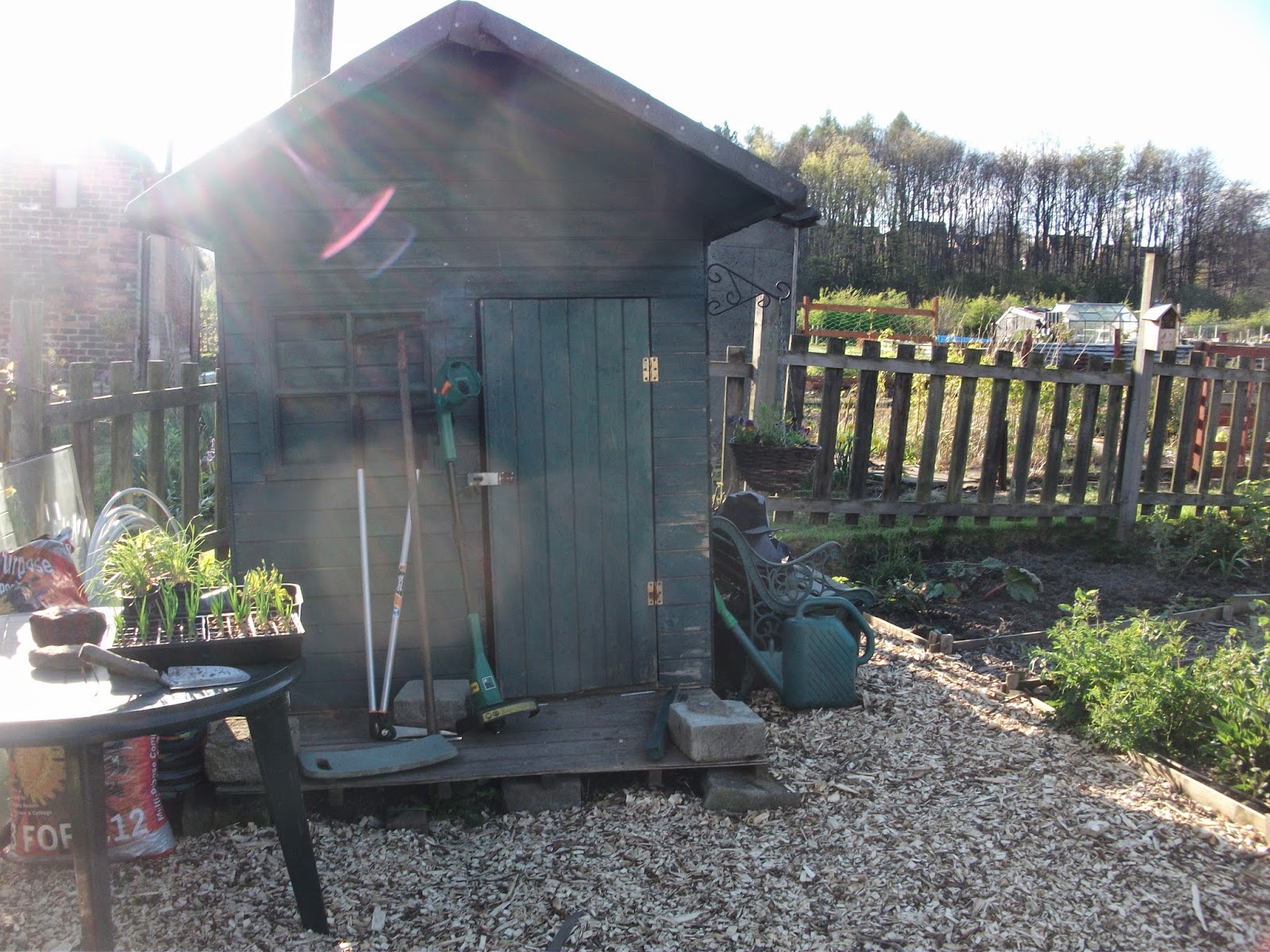 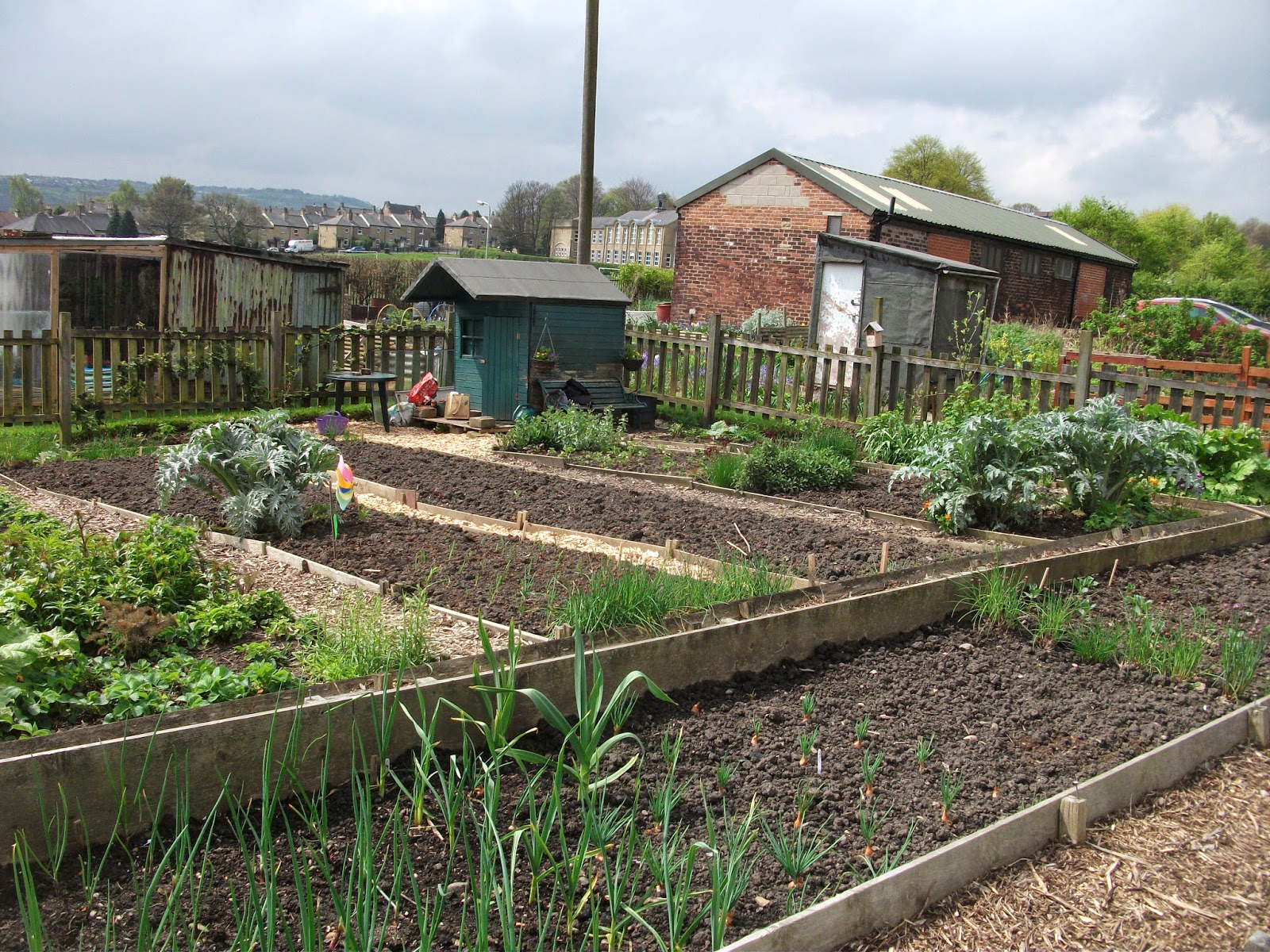 As for starting planting, my shallots have been planted and onion sets have just gone in. Potatoes are in, though I'm only growing a couple of shorter rows this year. I've planted my broad beans which I'd started off in modules. Today I sowed some peas and spring onions. 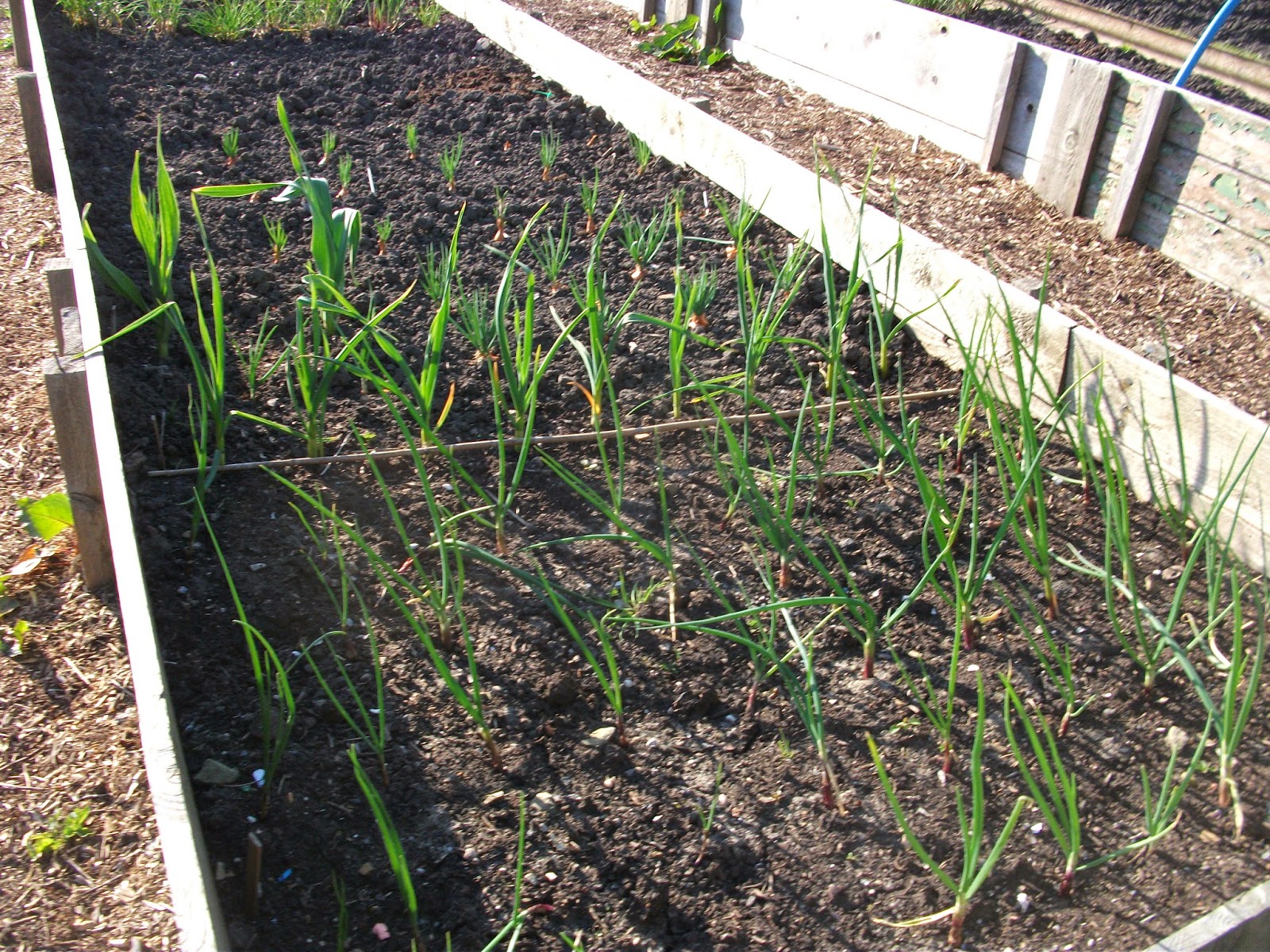 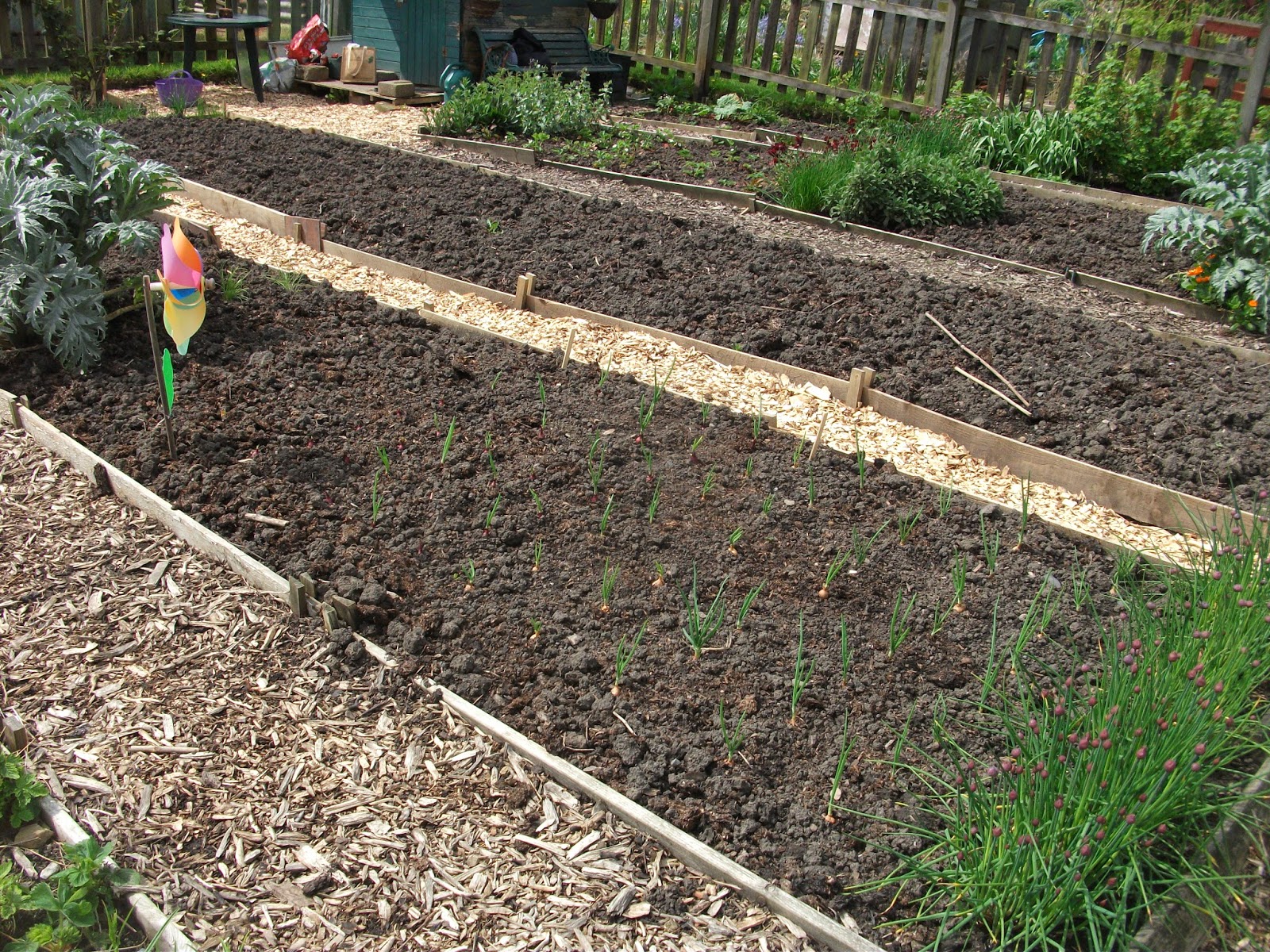 My redcurrent is full of flowers this year. 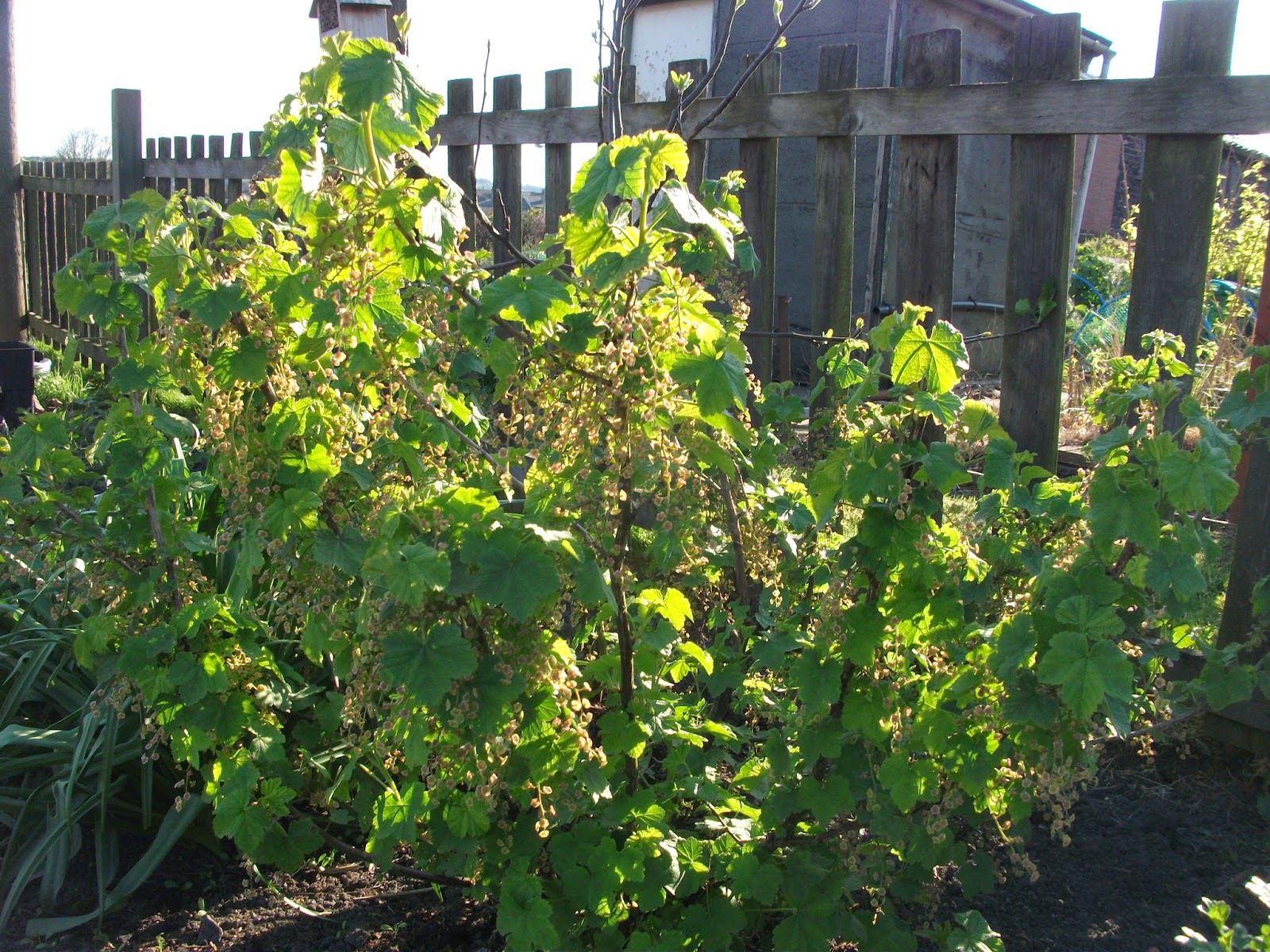 I'm dedicating a whole bed for growing cut flowers this year and have planted some gladioli and just put out some sweet peas. 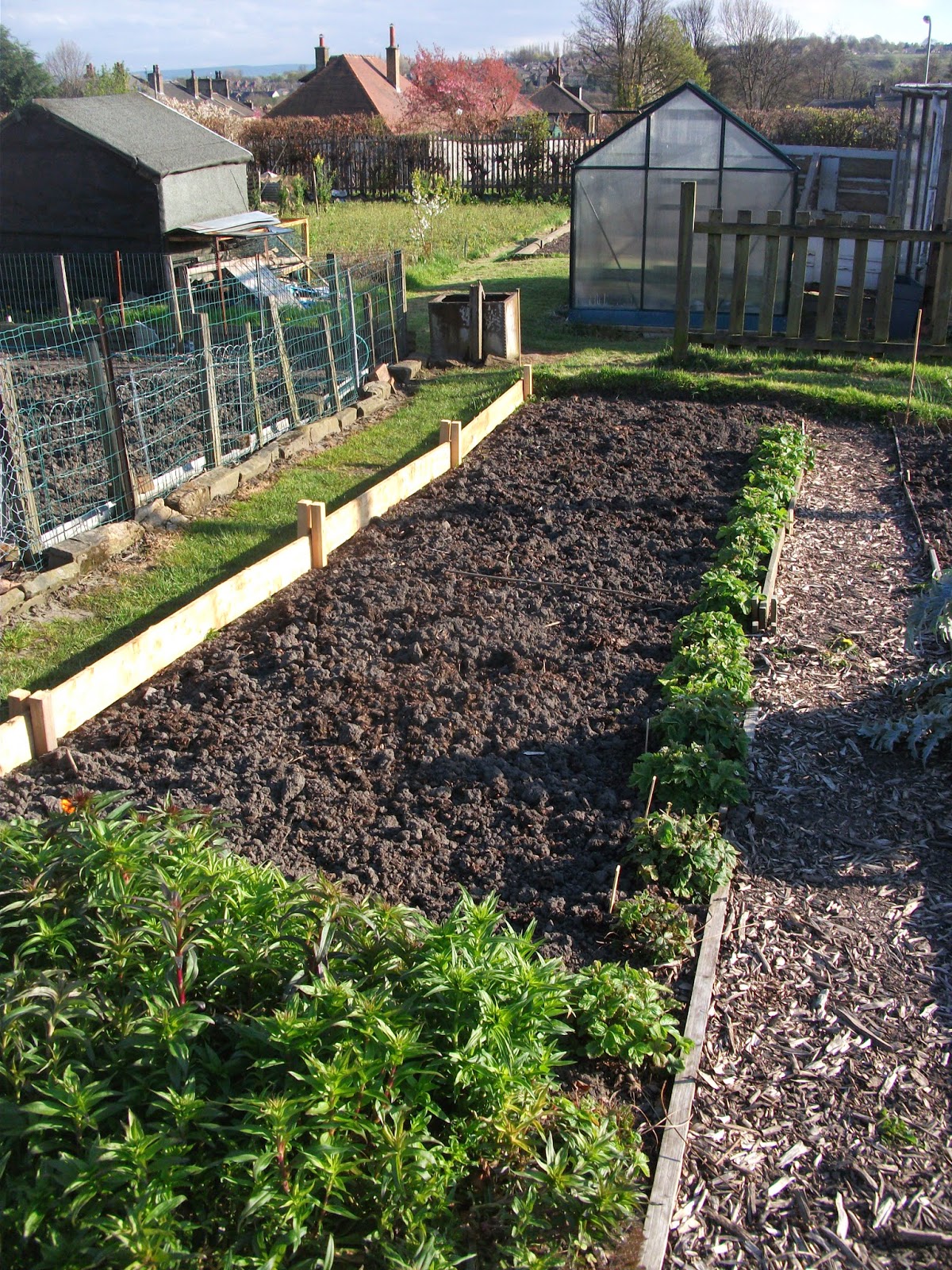 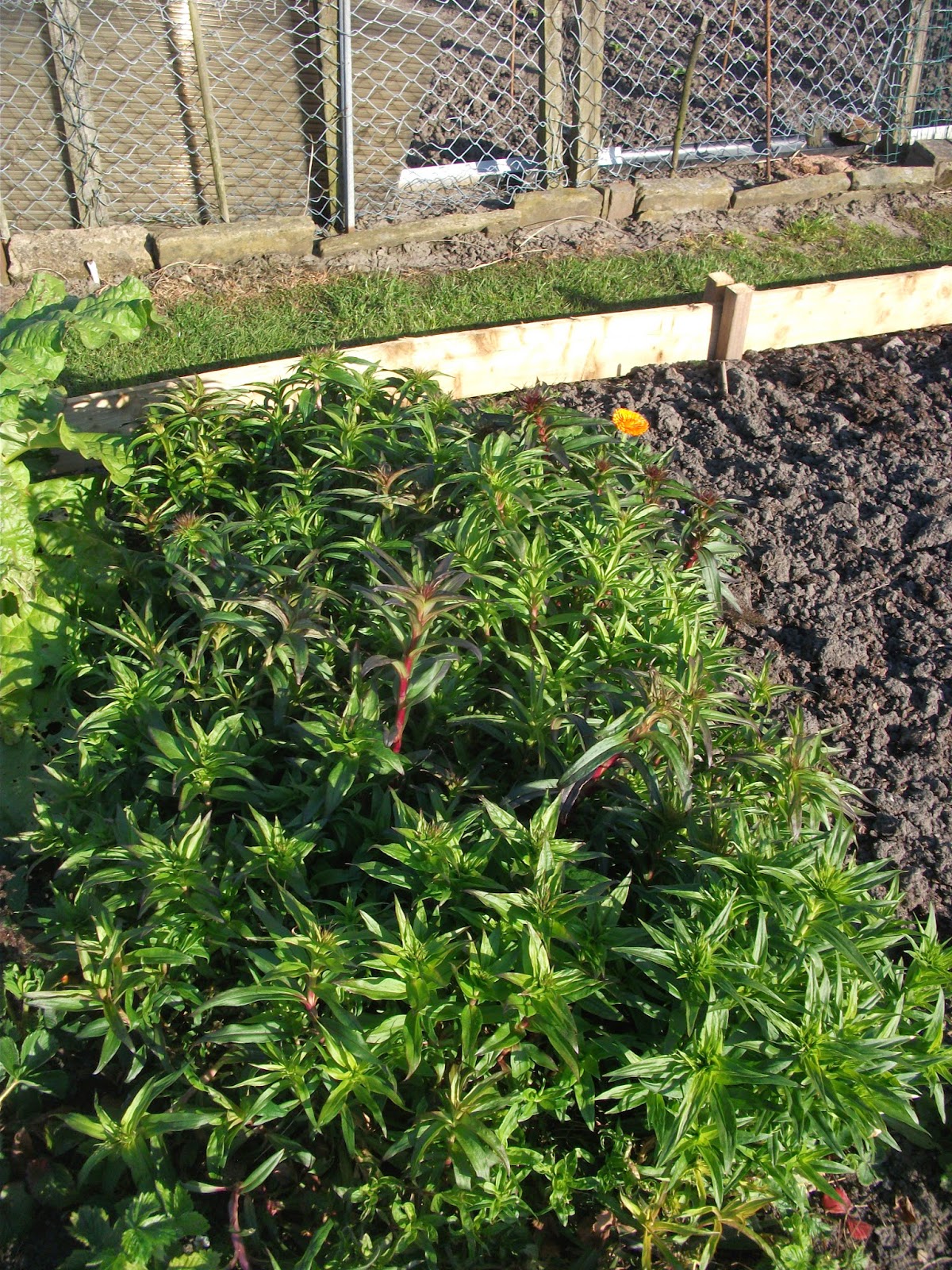 There is a patch of Sweet William in there already which is almost ready for picking which will be a good start.
I've even started trying to tackle that place of dread, where all bits of wood, glass, compost bags etc things get placed, that place is the back of the shed! I've not quite plucked up courage to open the covered bucket that contains some comfrey stew, to feed my flowers, that was made a couple of years ago and was forgotten about though, I might need a mask for that one. 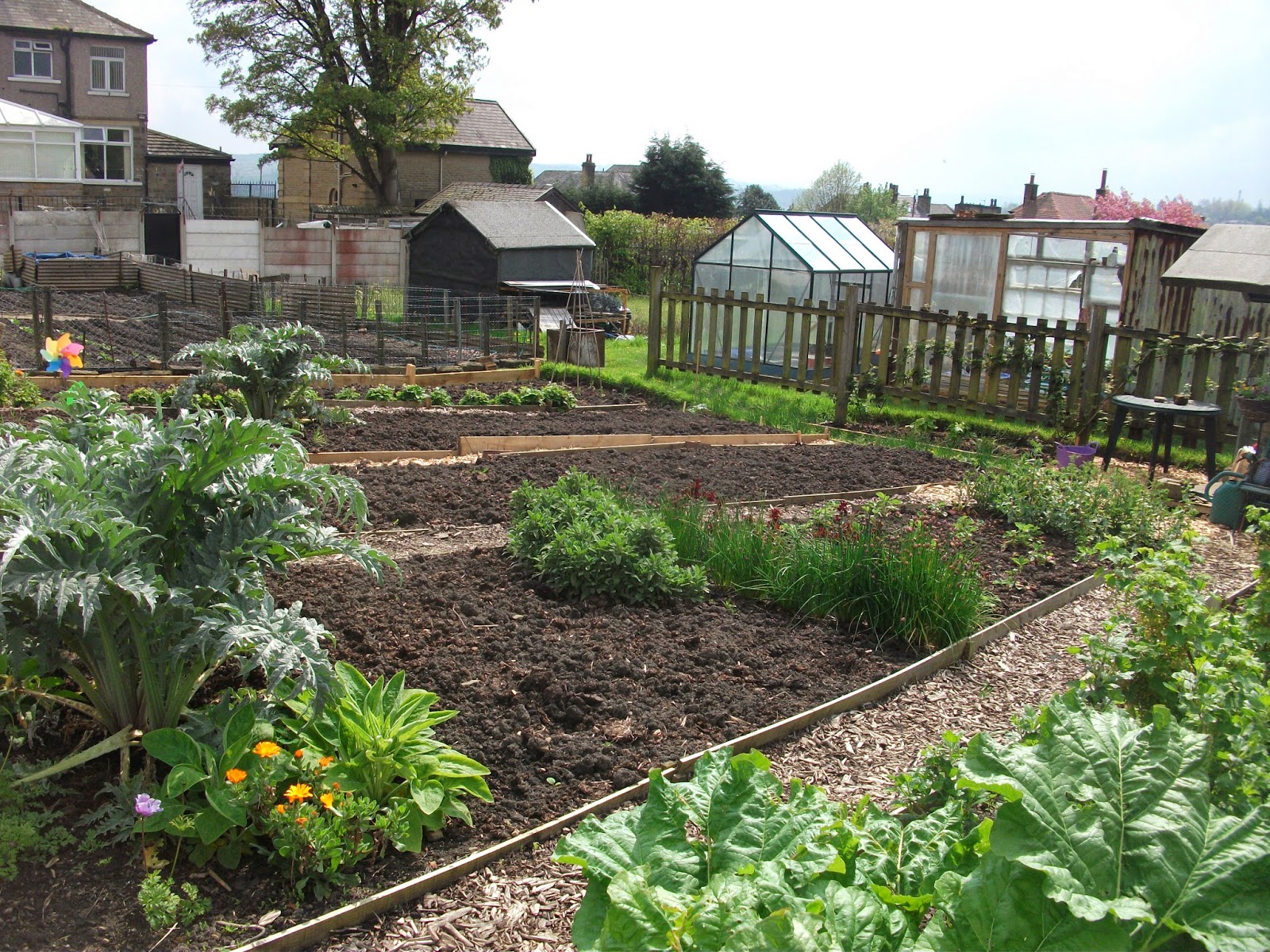 I've had a week off my normal job this week, though carried on my 2 days at York Gate and then on most other days I've been at Harrogate Flower Show, what a great week helping to create a small show garden. It was for Perennial, designed by Shanet Alexander and called 'The Essence of York Gate'. I'll write a separate blog post to show more photos, but here is a couple of the final garden. 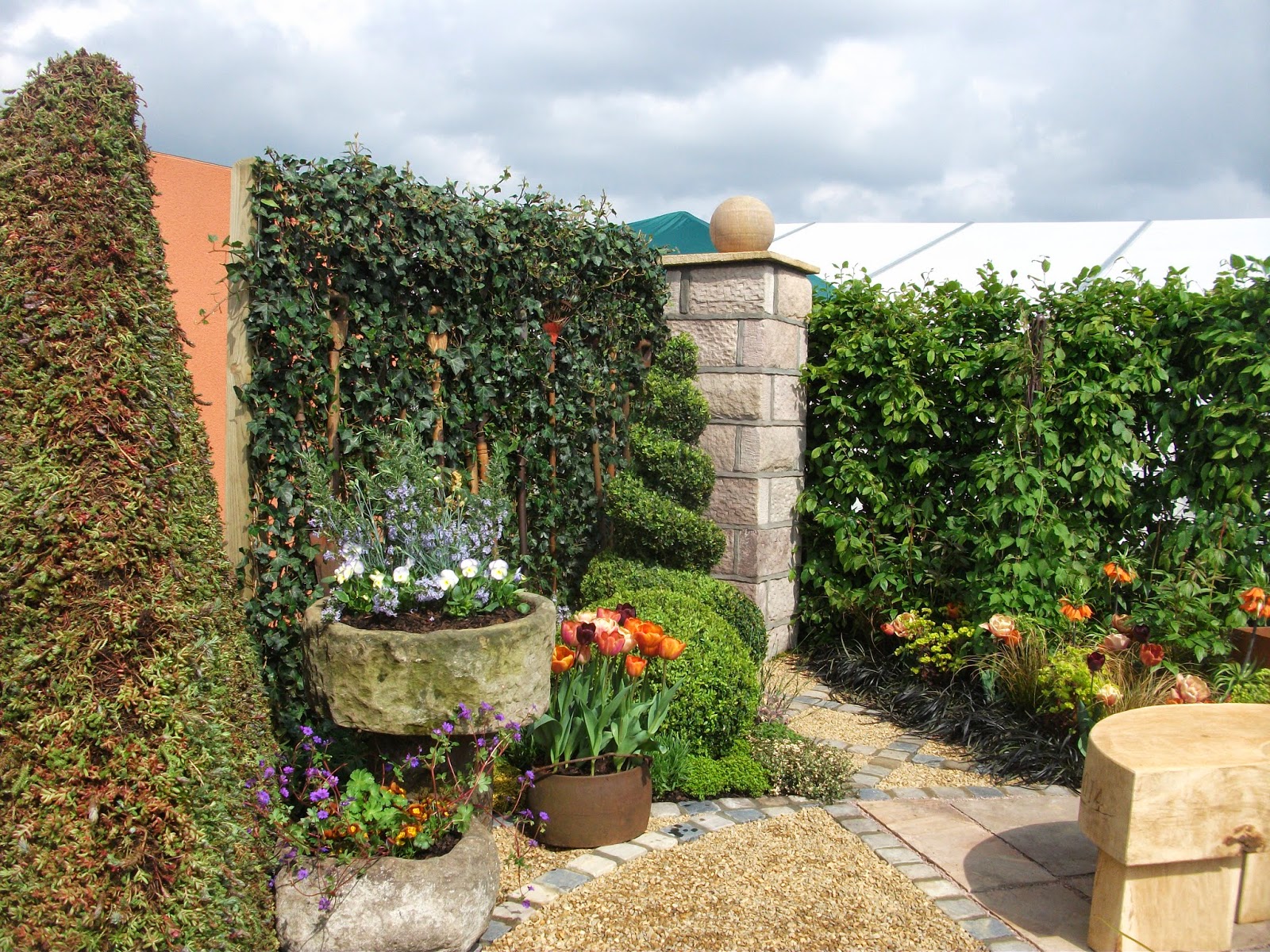 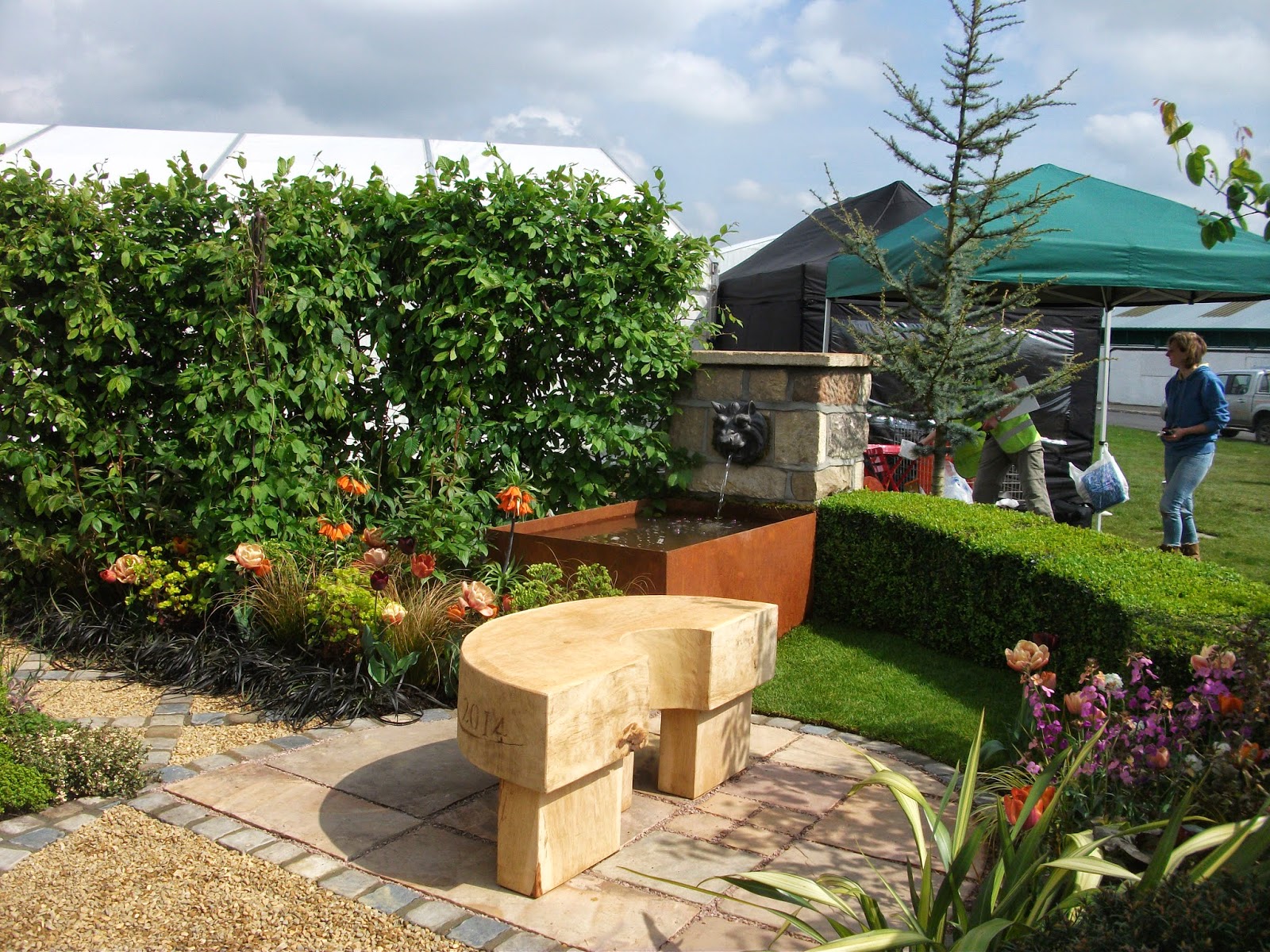 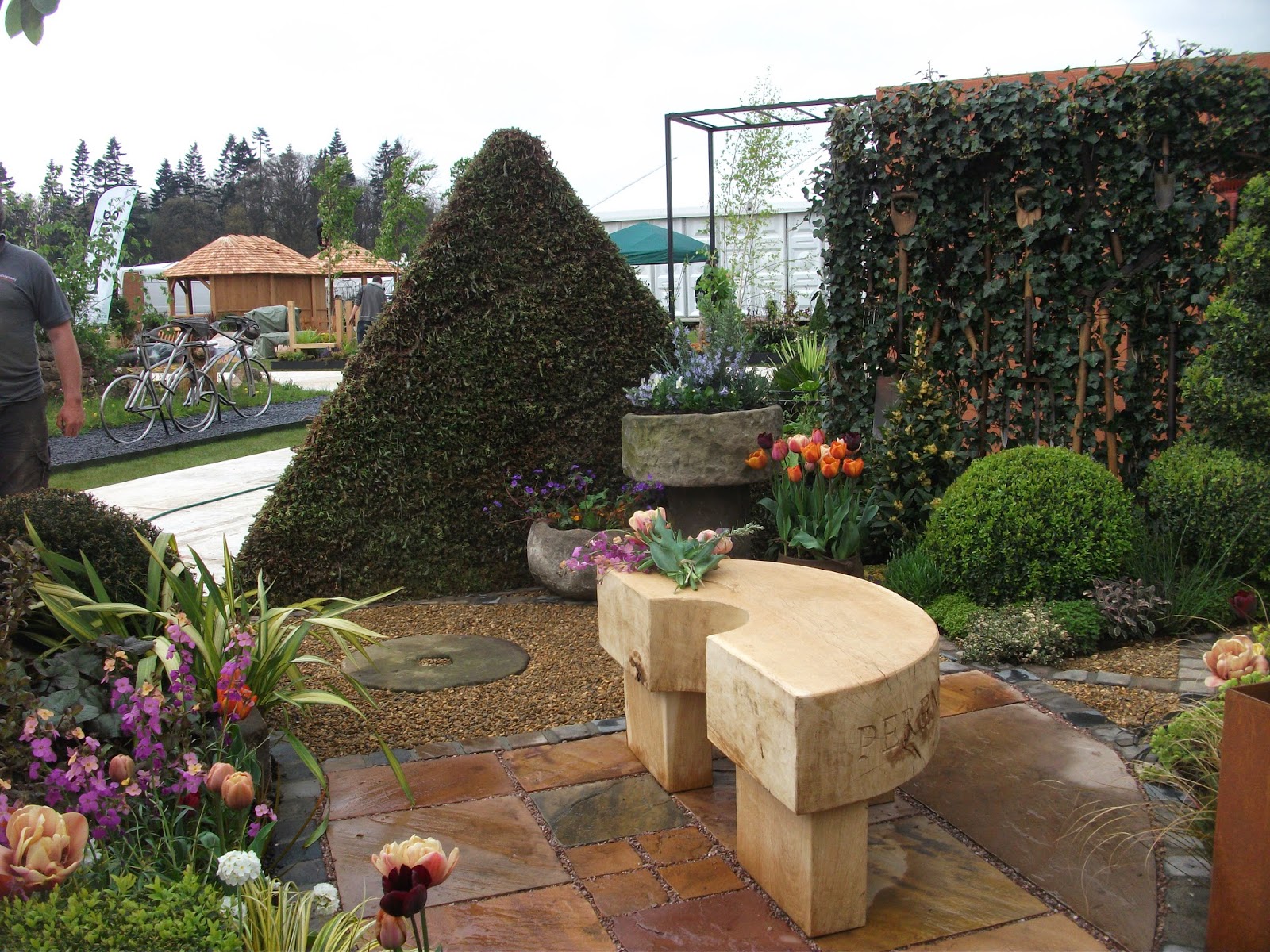 I may be biased in thinking that the garden was brilliant but the judges agreed too. 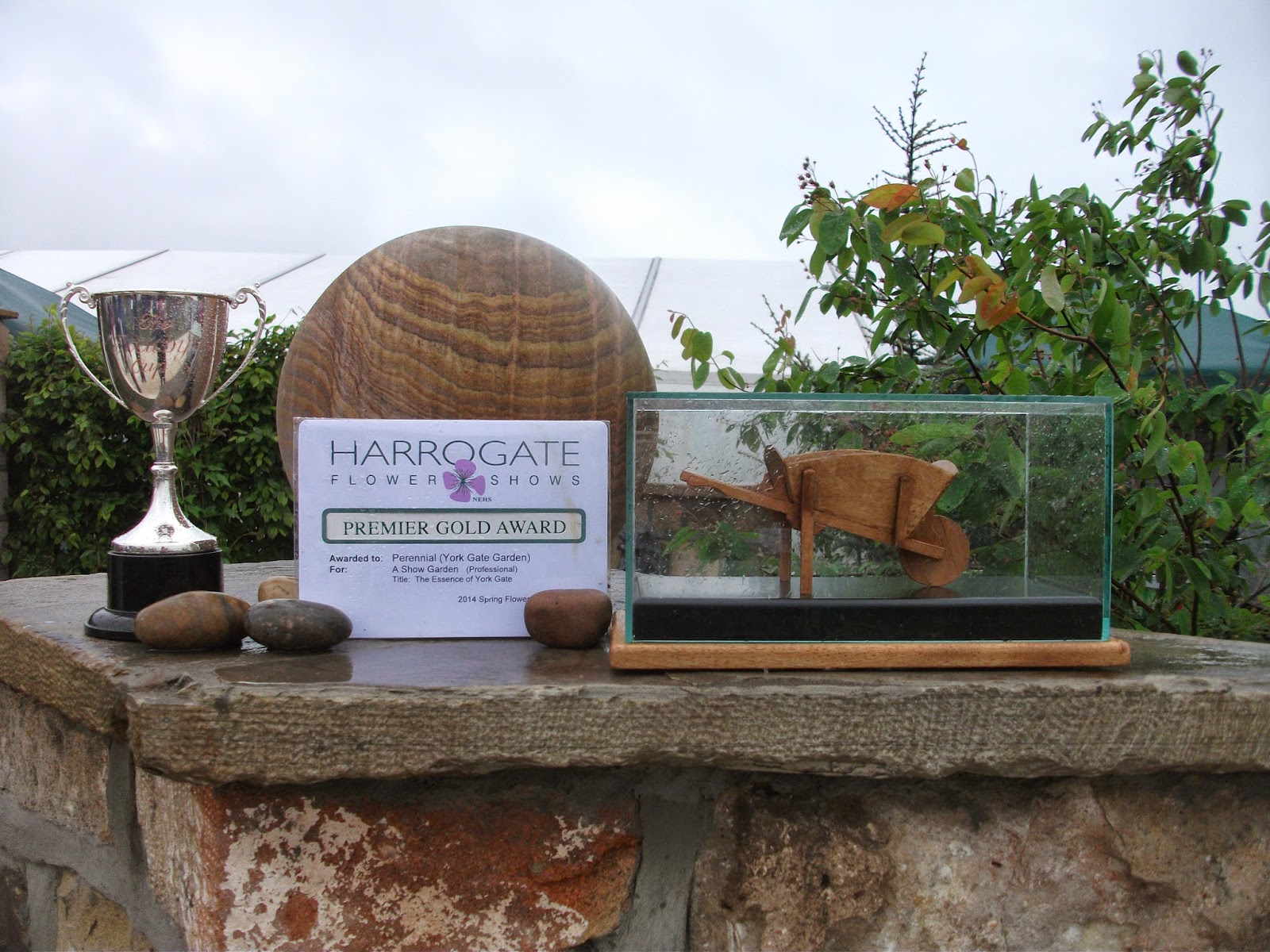