It was inevitable, I know, all our complaining about the weather and then whoosh, full speed ahead into Spring and all is chaos again. If I'm not sowing seeds, I'm pricking out, if I'm not pricking out I'm potting on, if I'm not potting on I'm finishing off the digging at the allotment. That along with planting potatoes and garlic, putting up wigwams for future crops and getting on top of the early weeds, its all go. That's as well as my day job! I'm not complaining though, I love it. This time of year feels like you are always trying to keep up with the garden/allotment. But I feel exhilarated with all the new growth, full of optimism for the summer ahead. If I'm not now I never will be. Plants and trees seem to have put their foot on the accelerator and are rushing into growth with this first hint of warmth for months. I was working at home on my computer all day one day last week, my desk is in the back bedroom, which also serves as a temporary greenhouse at this time of year, for starting off the more tender varieties before I can put them in the mini-greenhouses outside. It gets full sun for a large part of the day. I swear that you could almost see the seedlings growing as I was working. I'd sowed some Cosmos seeds a couple of days before and everytime that I looked across there was another popped its head out of the compost. Unbelievable. They really germinated quickly. That and the Tithonia which was up a day after sowing, thats a record for me I think very speedy. It amazes me that after just a couple of days of warmth there is now a proper haze of green on the hawthorn hedges and there is a Horse Chestnut tree which I walk past each day and straightaway it has unveiled its leaves, hanging down like a skirt around the flowerbud which no doubt will be out soon. The daffodils have opened their buds and are blowing in the breezes.
I say breezes, wow its been windy here the last few days I've been bracing myself for my mini-greenhouses to take off and end up in next doors garden. Its still blowing a gale now, but at least the sun has come out now. I'm hoping it calms down soon.
So yes I've been very busy, after the winter we've had and also the summer that we had last year, I feel I've got to make the most of every nice day or evening. So Monday and Tuesday I was up at the allotment straight after getting home from work and after a quick bite of tea and there till 8ish. Its quiet up there in the evening, only me and one other chap, who was barrowing manure onto his plot. 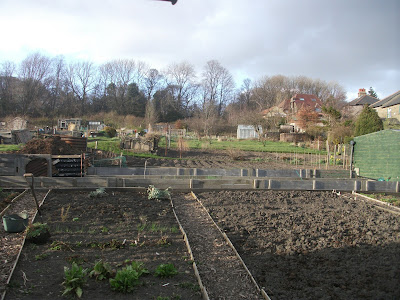 My beds are almost already now, I've forked in some rotted manure on most beds and they are poised ready for planting and sowing. I've planted my early potatoes, they are in, I'm growing 'Pentland Javelin' and 'Charlotte', I'm planning on planting the maincrop 'Desiree' a bit later. I noticed the other day when I was at the plot that the garlic that I planted in the autumn has just come up. I'd given up on it, thought they had rotted and had planted some more in modules in the mini-greenhouse at the end of January. So will have lots, I've now planted the ones in modules onto the plot.
The over-wintered 'Electric Red' onions have perked up a bit and so may get going again now. They'll certainly be ahead of the ones that I got started in modules at the end of January but not by much, but you just never know. I still think they are worth a try.
I planted a Blackcurrant 'Ben Lomond' in my fruit bed, to go with the rhubarb, a gooseberry, a redcurrant, a small apple tree and some strawberries. So I'm looking forward to those, probably not this year but next year. My gooseberry and redcurrants are now well established and I've really no excuses to not get a good crop off them this year so fingers crossed. 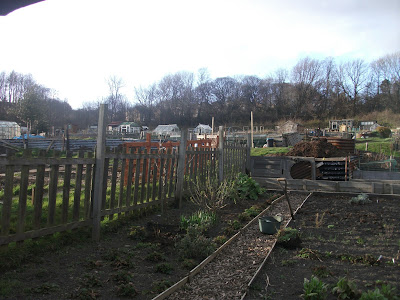 Seed sowing is in full swing, all at different stages and I've still got lots to do. Veg-wise I have on the go some Chillis, Tomatoes, Tomatillos, Celeriac, Artichoke, Sweetcorn, Broad beans, Peas, Beetroot, Leeks, Cauliflower, Calabrese, Lettuce and other salads all at various stages. Flower-wise I've sown some Sweetpeas, Dahlia 'Bishops Children', Cosmos, Nasturtiums, Tithonia, Salvia viridis, Malva, Calendula (with great thanks to Flighty for the seeds from his favourite flowers), Cerinthe and lots of Sunflowers. I need another session of sowing this weekend.
We had our first allotment meeting of the year on Sunday and we are planning to hold another allotment show again this year, which was a great success last year. Due to the terrible start to the year though it has been decided to hold it a bit later this year (8th September). This year again we are all to show a basket or tray of 6 different vegetables and we have proper guidelines for how many of each to show and whether they should be trimmed and dressed!! All a bit bonkers to me but we have people on the site who take it very seriously so I shouldn't joke, but each to their own. I will participate but know that I won't have much chance against them. One thing that concerns me the most is that there are 3 compulsory vegetables in the basket, potatoes, onions and beetroot. Now potatoes and onions I'll be fine with, though they won't be the whoppers that the professionals grow, no the crop that worries me is the beetroot! I really struggle with what other find the most easy of crops. I had about 3 small beetroot the whole of last year. I've tried sowing direct or in in modules and still no success. So that is my challenge this year to get some good beetroot, I've even got some seed for the yellow beetroot and the one with stripe 'Chioggia' so fingers crossed. Any advice from you growers out there? I'll try anything. There is also an additional category this year which is a vase of sweet peas, six stems of any cultivar. But whether we will still have lots of sweet peas flowering in September we'll have to see. But it is a great way to get everyone together and was nice to chat to other plot holders who you don't always see. We are planning to organise the tea for afterwards better this time as we had far too much cake last time! Can you have too much cake, I'm not sure.
But my most exciting news is that I'm booked onto the River Cottage 'Get Growing' course, with the new Head Gardener Craig Rudman, on the 7th July. I never normally enter competitions but Hugh FW is a bit of a hero of mine and when there was a competition a couple of years ago in The Edible Garden magazine to win two places on the course I gave it a go and much to my surprise I won. Its taken a while to get it sorted but its all booked now and I'm taking my sister and will spend a few days down there in the most beautiful part of England. We have a night's B&B included in the prize plus dinner at River Cottage canteen on the Saturday night. Woooo. Can't wait.

Can we restart Spring now?

So the snow has finally gone from my garden, only yesterday though. There was a patch holding on. All round Huddersfield there are still little towers of snow. The moor roads still have big drifts where the snow plough has piled it up high.Though its gradually sinking a little bit each day.
It was a good weekend though with plenty of sunshine, and it was great to get out for some fresh air after a very stressful and long working week.
On Saturday it was a gorgeous day with proper blue skies, still a bit of a nip in the air but compared to what it has been it was balmy. It was my friend's 40th birthday celebrations and we were having afternoon tea on a canal barge at Hebden Bridge. Delicious scones with jam and cream, cucumber sandwiches and lots tea in vintage tea pots and delicate cups and saucers. Very civilised. 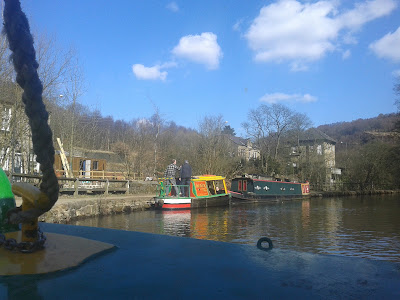 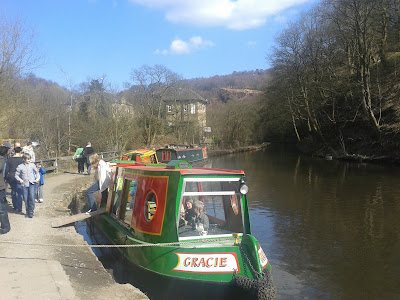 On Sunday the sun was streaming in through the curtains so I gave up on the lie-in and got up and out. It was a little bit warmer too.

At the allotment, my rhubarb has survived the snow but has not grown at all since my last visit, there are some signs of green on the redcurrant. 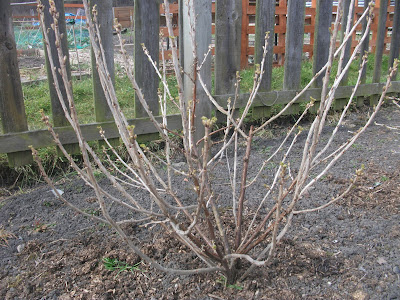 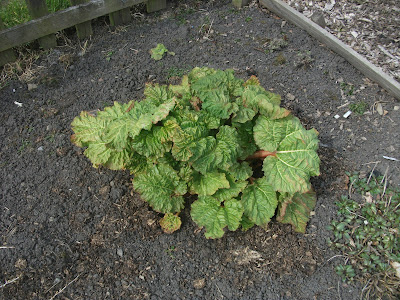 Martin helped me finish off getting the last bits of manure on the beds. 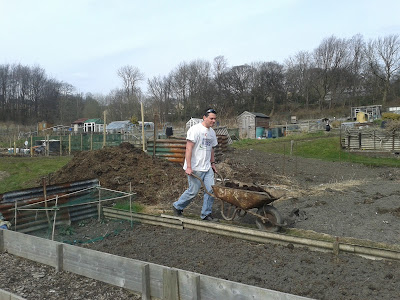 I lured him there with a promise of a nice cup of tea and some bourbon biscuits, with our new toy for the allotment, a small gas stove to make a brew. 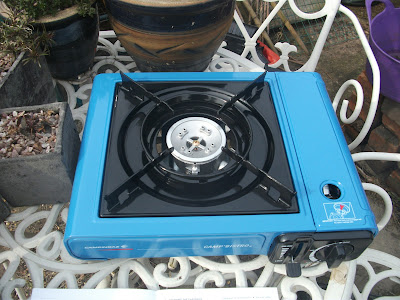 But unfortunately the water has been switched off on the site due to the freezing weather, I think there has been a leak and it was being fixed today. So no tea for us!! We were gasping after all our barrowing and digging. Oh well I'm sure it will get some use soon.
I've been off today and it was a bit different, much hazier and much colder again, with a biting wind but I finished off most of my digging today and have then been sowing seeds, pricking out and potting on. My christmas present has been coming in useful. 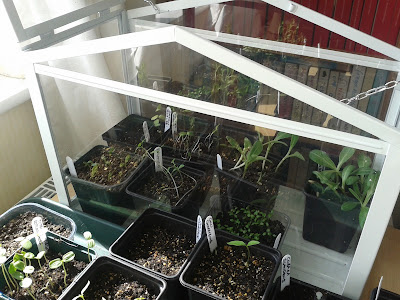 My back bedroom is starting to look like a greenhouse again. But with it so cold at nights I'm reluctant to put too many things in the plastic greenhouses outside just yet.
It seems like the garden and the allotment have been on freeze-frame for the last month. Nothing has changed. Reading my gardening magazines telling me what flowers I should be enjoying is a bit of a joke with the Snowdrops, Crocuses and Hellebores still in full bloom in my garden and the tulips, forget me nots and blossom seeming a long way off. But a bit of sunshine and more importantly some warmth and I'm sure things will start moving again. Maybe soon the scene will be transformed from this monochrome landscape to a world of Spring colour, like Dorothy walking into the land of Oz. Here's hoping it gets a move on.