I've been saying the same thing each month this year and I'll say it again, I can't believe its September! This year is just flying by. Its a cool day today, a strong chilly wind, just to get you in the mood for autumn, but I hear that summer is back again next week! So a good day to catch up with my blog and read some others.
There are a few changes here, firstly non-garden related but we've sold my mums house and she's moved into a lovely flat, close to her old house. The downsizing from a 3 bedroomed house to a flat has meant a lot to sort out so its been a busy month. Mum has been kept busy and I'm slightly worried that now that everything is settling down this is when she will start to really miss dad. For me it come in waves, just little things that can suddenly remind me of him. He's never too far from my thoughts.
But on a lighter note I've taken a step in a potential career move, its something that I've been thinking about for a few years, but this year things have fallen into place to bring it together. I've started as a trainee as part of the Women Returners To Amenity Gardening Scheme (WRAGS), a scheme that is coordinated by the Women's Farm and Garden Association (WFGA). I do 15 hours (2 days) a week and I get trained by the head gardener, I get a training allowance and have to fill in monthly reports detailing all my work in the garden. I've been looking into doing it for a while but there are a limited number of gardens that take on trainees, especially in the North of England. I was really excited when I heard that one of my favourite gardens, York Gate, on the outskirts of Leeds was going to start taking on a trainee. The interviews were in mid-July and I was lucky enough to get selected. So I've gone down to 3 days a week in my job at Manchester University and I work 2 days at York Gate. I'm just about to start my third week. It is a bit weird doing 2 jobs, both so very different and as with any new job its taken a few days to get used to the routine and how they work in the garden but I feel I'm settling in well and getting the hang of things. Plus experience is just what I need if I do decide to go into gardening full time.
Those of you who don't know the garden it is quite small for a garden open to the public, at around 1 acre, but it a true delight to behold with immaculate design and a general feel of an arts and crafts garden. It is split into lots of 'garden rooms' with lots of intricate design details and lots of vistas within the garden. So I'm in heaven and I've already been kept busy pruning the many topiary features in the garden, along with daily tasks of deadheading, watering and maintenance. There is always that extra special feeling of being able to see a garden in the morning in that gorgeous soft light. So I've also been busy with my camera, which is becoming a useful tool for learning as I can take before and after photos. I'm also learning lots of new plant names. Here is a link to a visit I made to the garden in Spring 2011. At this time of year the main border is full of bright pinks and purples of Phlox. 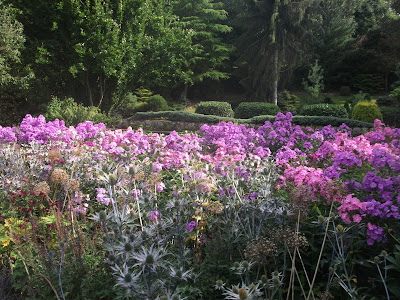 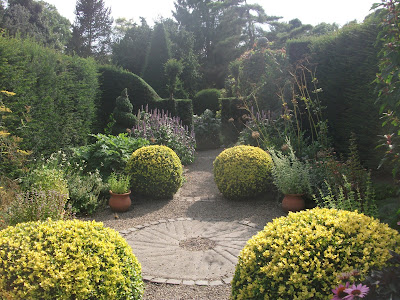 It was a bit misty when I arrived the other morning. 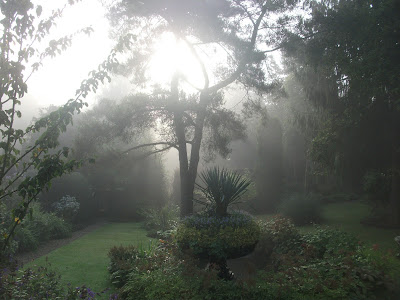 Anyway I'm really enjoying it so far and really looking forward to following the garden through the seasons.
My allotment has also kept me busy but what a year so far, almost every thing has been flourishing for me and I've had success with a few new crops.
The plot is looking a bit lush to say the least, with squash trailing all over the plot, sunflowers shining away and lettuce's sadly bolted. 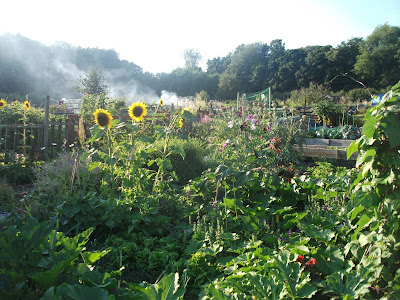 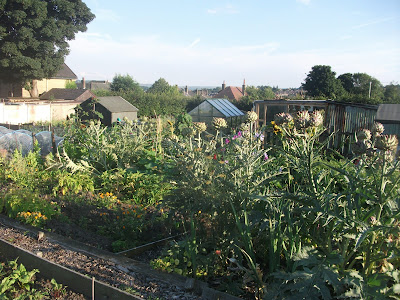 Currently I've got masses of beans, courgettes and the last of the calabrese. But I'm very excited by my first cauliflowers, its the first time that I've grown them and I'm starting to get some nice heads, which I've now tried to cover. 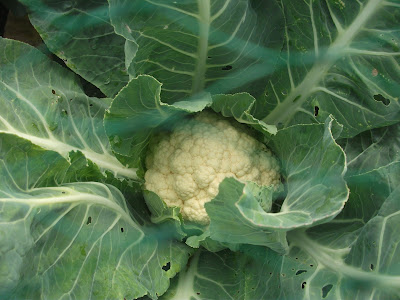 I've got 3 Brussel sprouts plants that are growing well too and there are now small heads developing on the Broccoli 'Romanesco' which is always spectacular. My onions and garlic have done OK, the white onions 'Stuttgarter Giant' better than the red onions. Shallots have been better than last year, the best of the 3 varieties that I've grown were the banana shallots which look great. 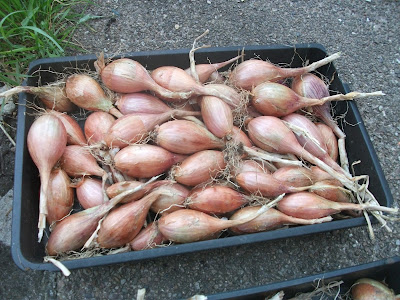 One block of sweetcorn looks almost ready to harvest I'll be testing them this week and what a treat that always is. 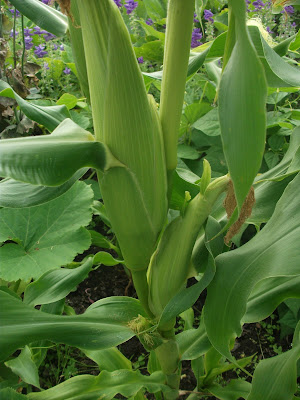 As for my Squash, wowsers. This one is a monster and is still growing, its 'Blue Hubbard', I've also got 'Crown Prince' and a general pumpkin type variety, plus my summer squash, 'Patty Pan'. 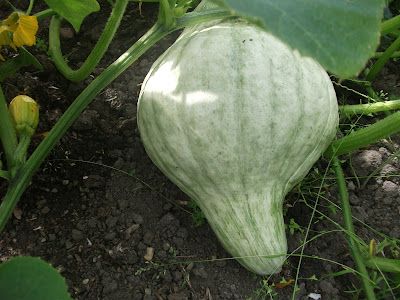 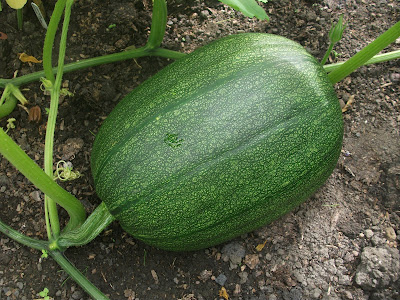 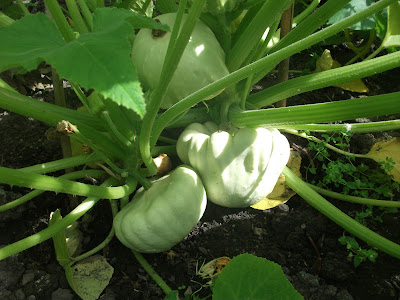 Not so good this year have been my Florence Fennel of which half have bolted, I think I sowed that too early. I've grown a few different varieties of beetroot 'Boltardy', 'Chioggia' and 'Golden Globe' and as expected, the clue is in the name, the Boltardy has been the best, the Golden Globe was definitely prone to bolt in the dry spells that we have had. My lettuce started off really well but then a lot of that bolted too, though it does look very pretty. 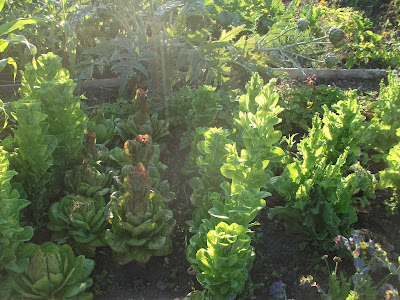 The warmth and sunshine has been great for 2 crops which I usually struggle with, as I don't have a greenhouse, and that is cucumbers and tomatoes. I've had a really good crop from my 'Sungold' tomatoes and I even dared to try some plum tomatoes which are just turning red. I've had around 6 cucumbers and still more developing from the plants that I have grown outside in the allotment. Really tasty ones too.
Still to come are my celeriac which I'm hoping is growing well underground and also parsnips and leeks which are getting going now.
I'll be getting a few things together to show at our allotment show next week, we have to put a collection of 6 vegetables together, of which 3 have to be beetroot, onions and potatoes. I'm going to give it a go, I'm hoping my cauliflower will stay well, but not sure about what else to show. Will see how things look next weekend.
Flowers on the plot have flourished too. The bees have been loving the sunflowers and the flowers on the globe artichoke. 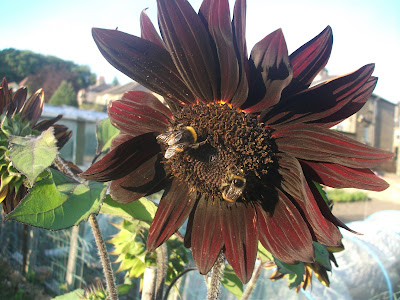 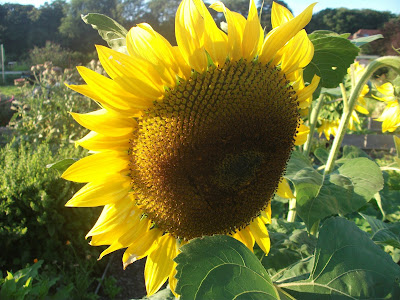 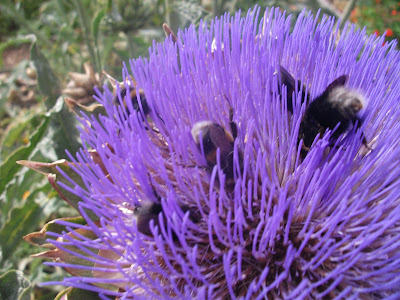 The Claret sunflowers come in a range of dark brown to orange colours and are multi-headed so I've even used them as cutflowers along with a smaller variety called 'Pacino' which has lovely small paler yellow flowers. 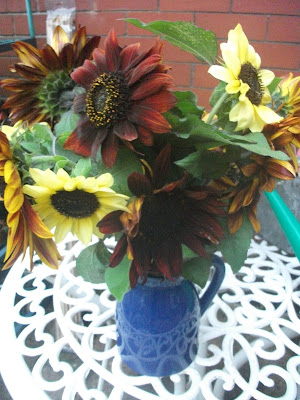 My sweet peas have been fantastic, considering I was a bit late sowing them. They are still flowering well now, I was Sweet pea-less last year and really didn't want that to happen again, so did a couple of sowings, the first ones didn't germinate in the cold or rotted off but the late ones were fine and grew away quick once we got the warmth. I've also had some lovely bright coloured Dahlias, Cosmos which has been great as a cut flower and Tithonia, to add some vibrant orange into the pink and purple mix. I've also grown Salvia viridis 'Blue Clary' which is all over my plot and looks set to flower well into autumn. 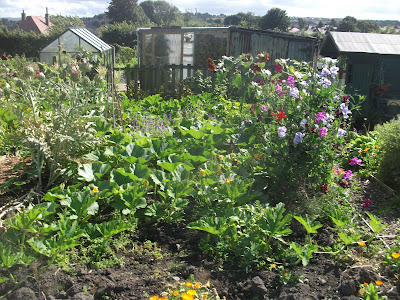 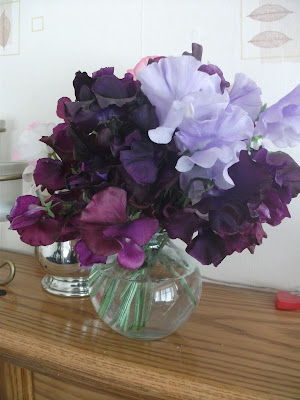 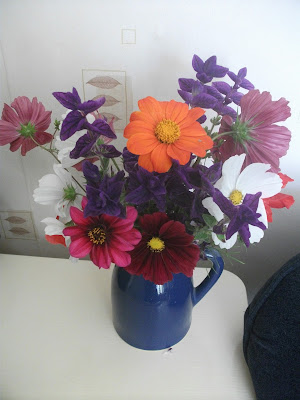 Hope you've had a good harvest, I'll be along to catch up with blogs later.