Well the joy that is Chelsea is over for another year. I had a brilliant time at the show, after I helped on the build the following week I was back down again on the Tuesday to help out on the stand, telling people about the Chelsea garden, about the charity Perennial and to try and encourage people to go and visit the two Perennial gardens, York Gate and Fullers Mill. It was a bit of an eye-opener for me, quite surprising how many people had never heard of the charity. Many people walking through the garden and asking about the plants thought we were a nursery so we had to do a lot of talking and telling people what the charity do. It was pleasing that the charity got some coverage on the BBC Friday night coverage of the Flower Show. 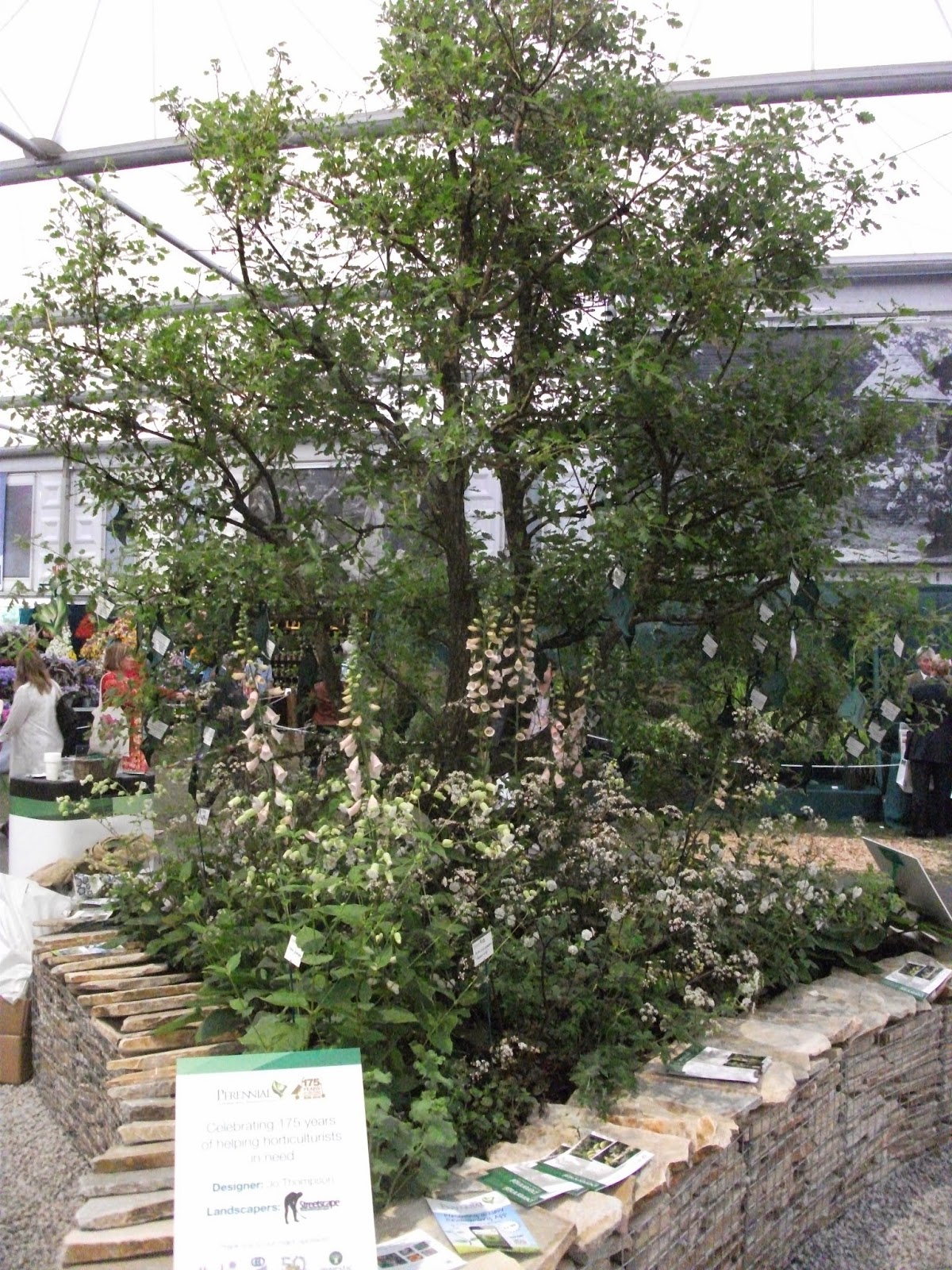 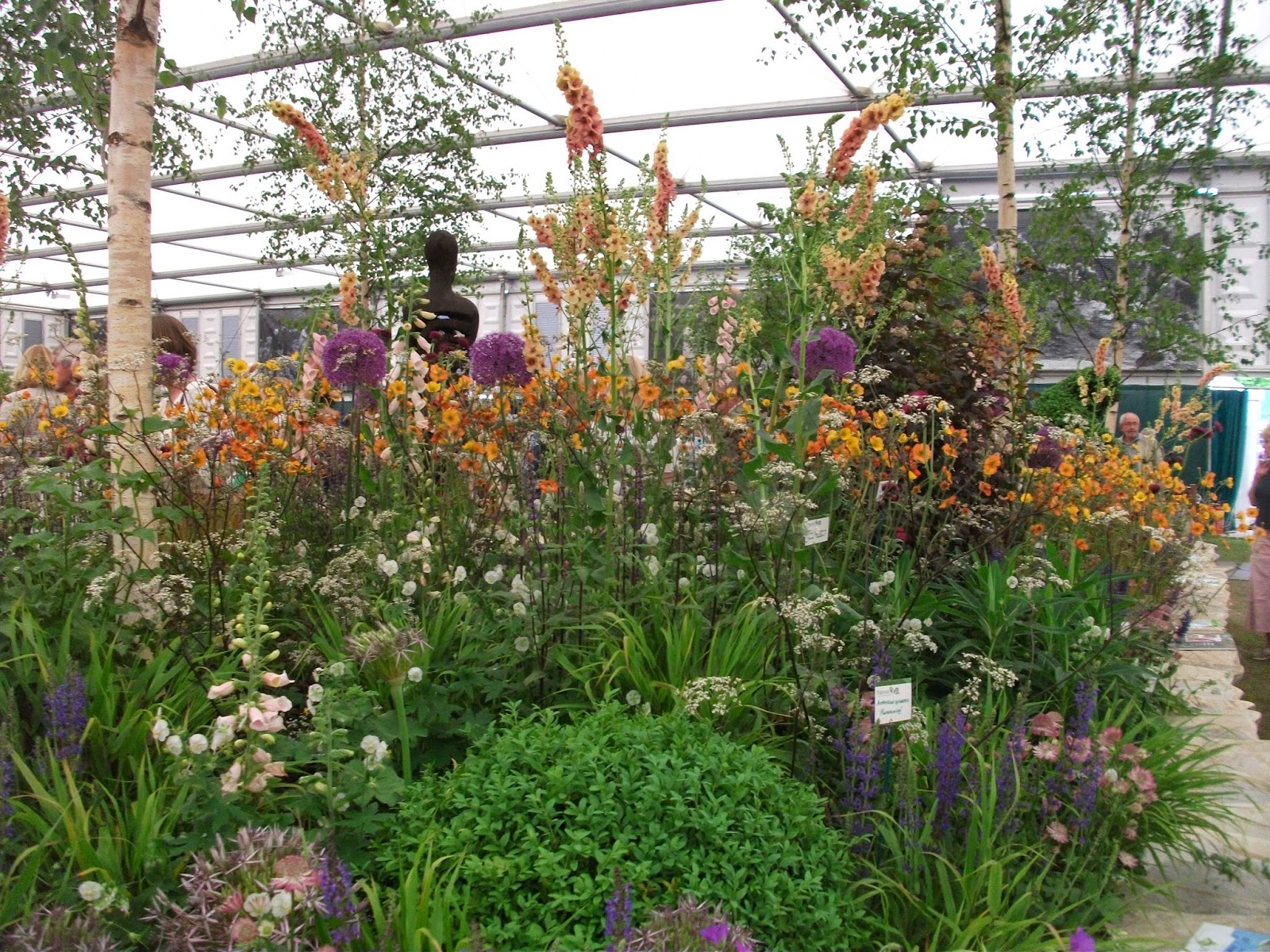 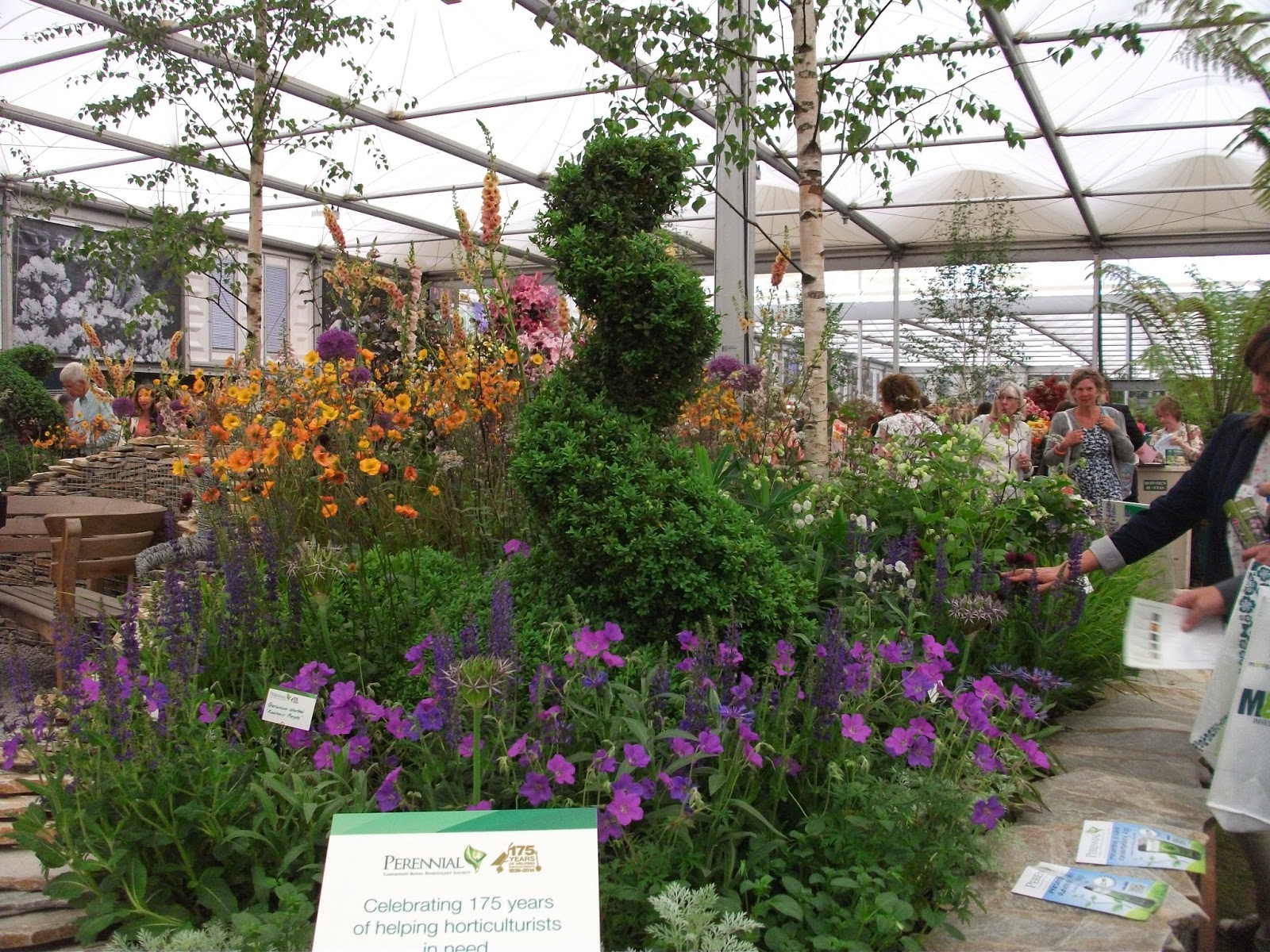 Tuesday was obviously medals day and pleasingly the garden got a Silver-Gilt. 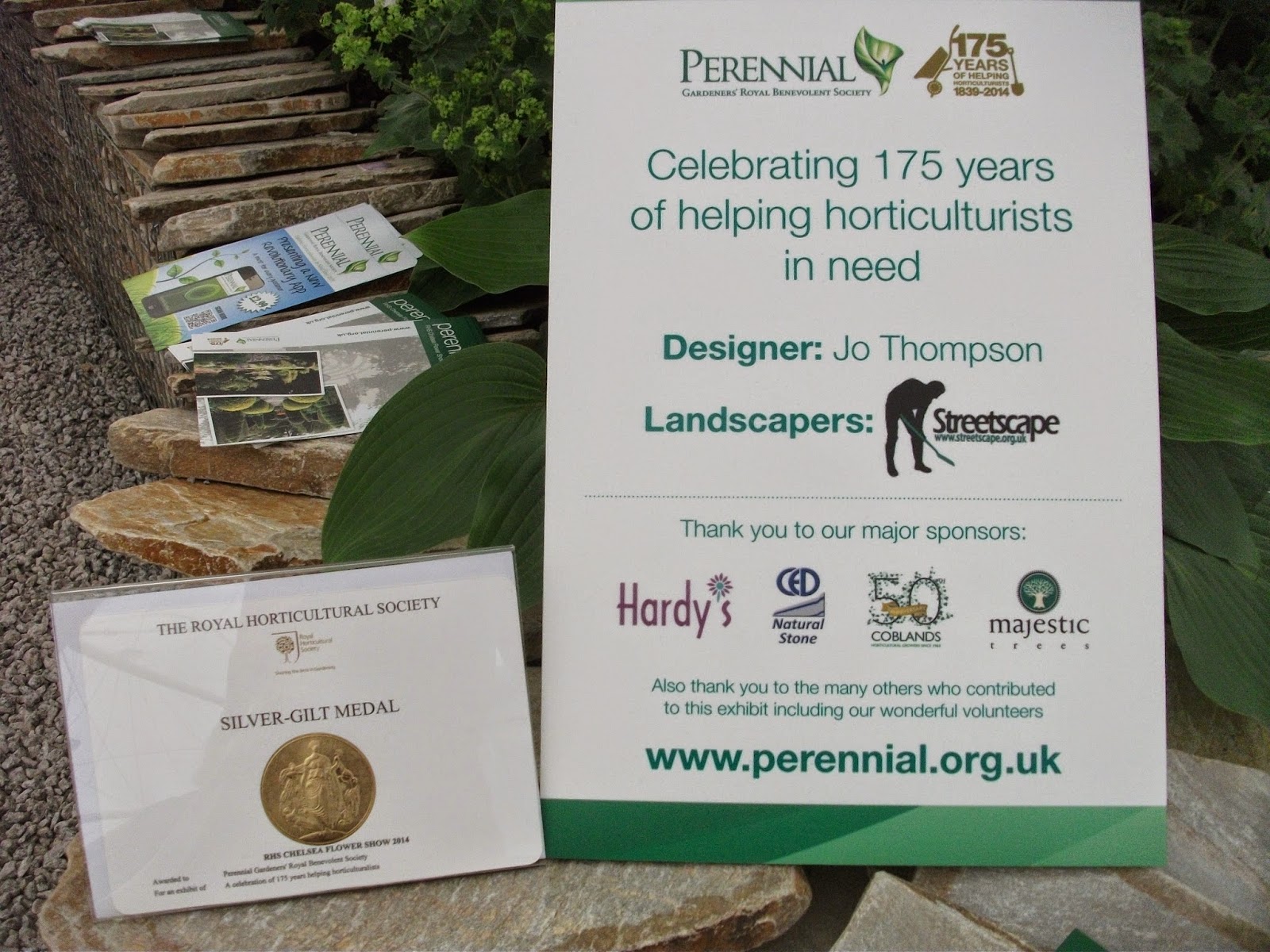 People asked lots of questions about the plants, the most popular was Silene fibriata, which is on the left hand side of the first photo below and in close up at Kew Gardens. From the Campion family it has lovely white bell like flowers with a frilly edge. The joy of this plant is that it can grow most places, shade or sun. We have it in the white border at York Gate. 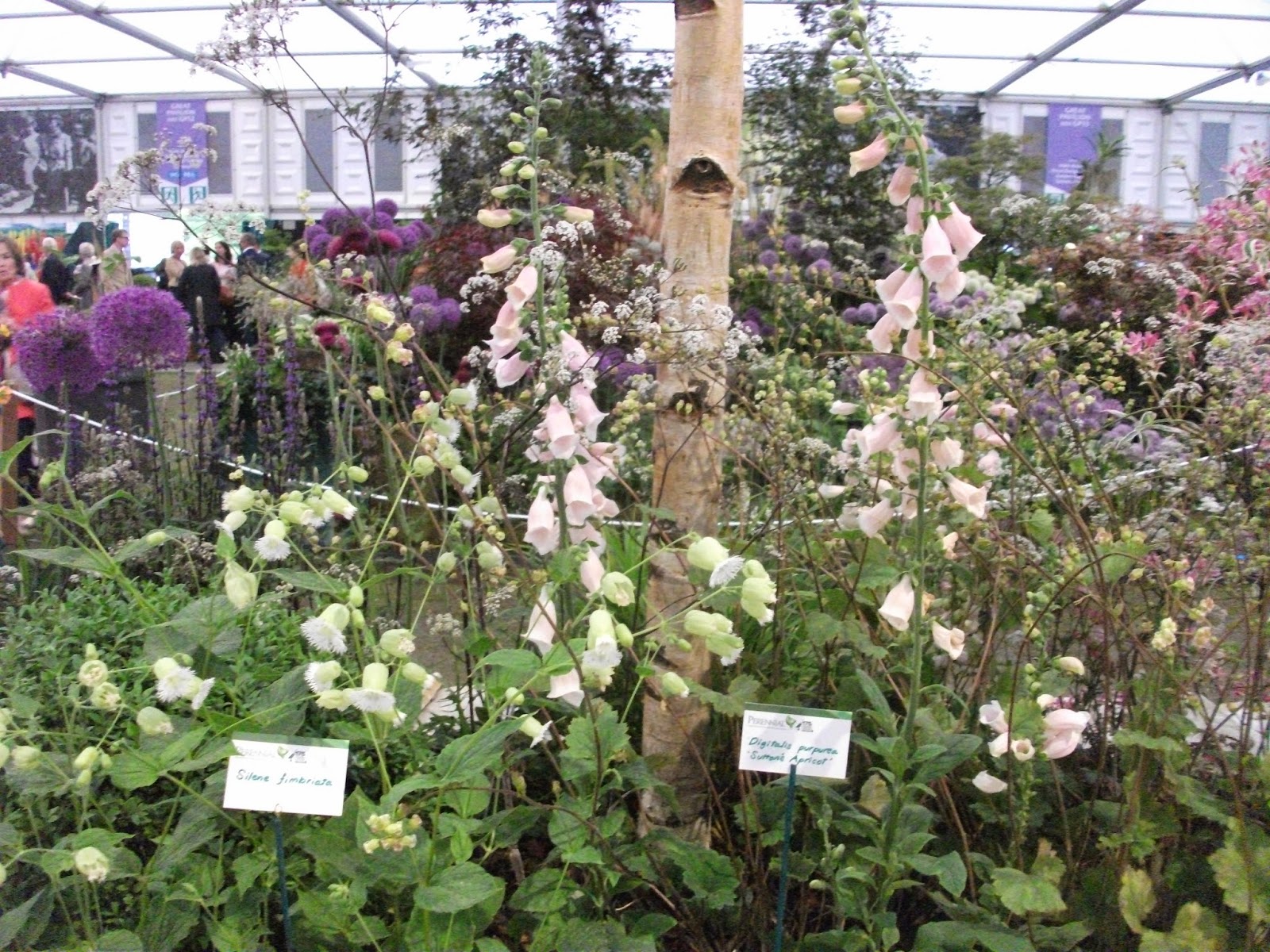 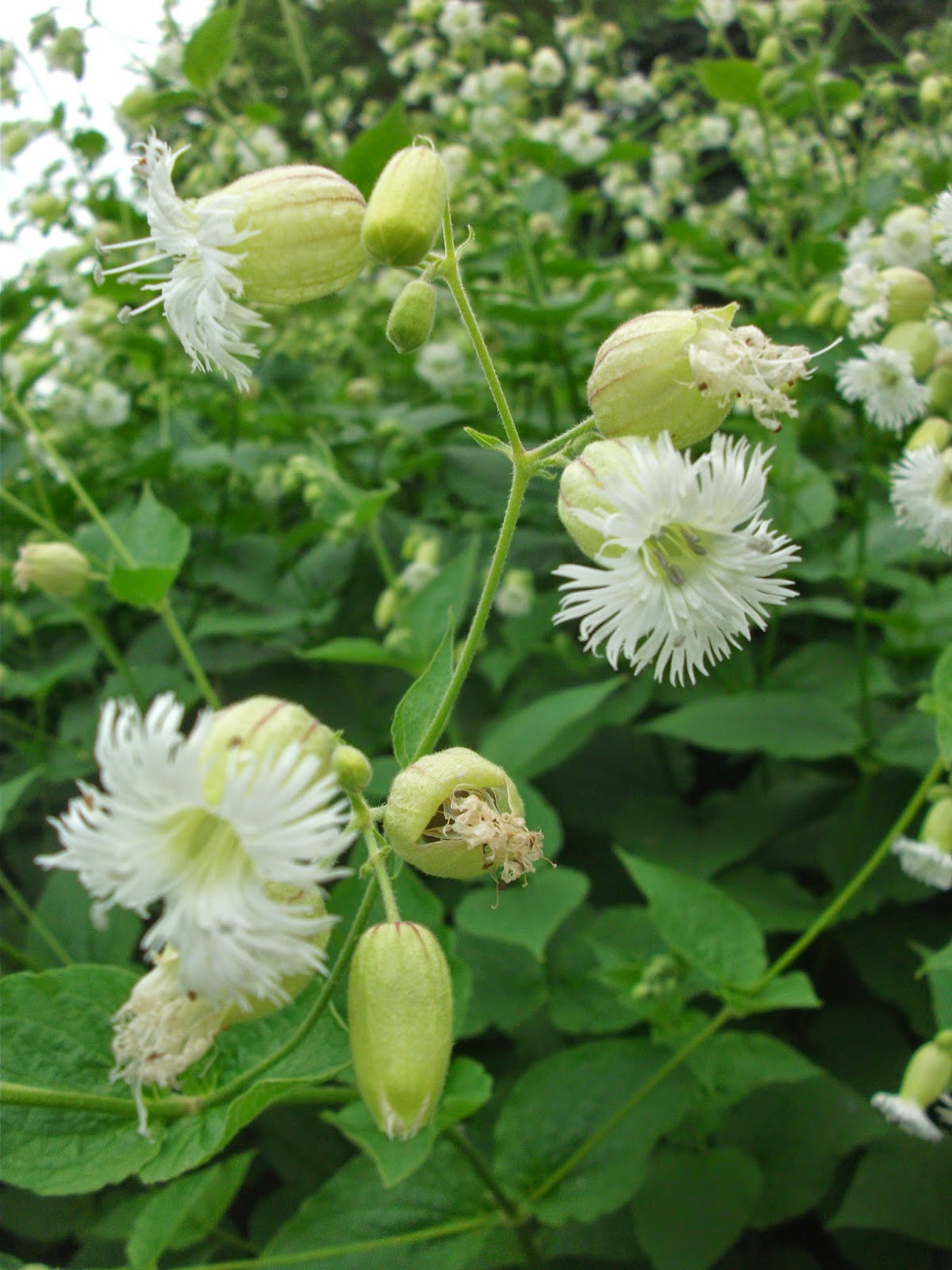 The other popular plant was Anemone 'Wild Swan'. 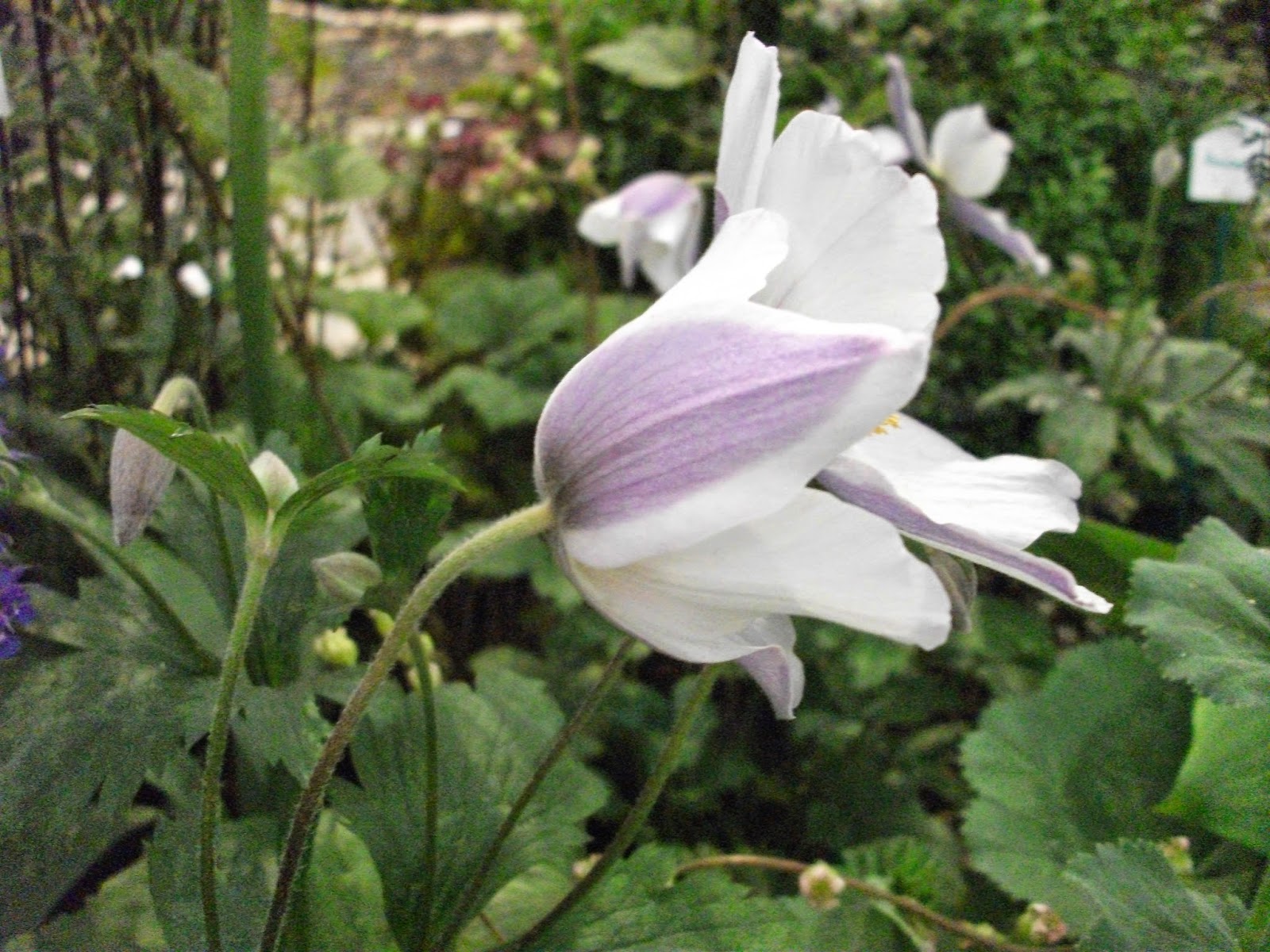 Its hard to get photos of the garden exhibit during the show, as it was very popular place to walk through and also to sit for a few minutes. Hopefully this was great for Perennial with lots of people taking leaflets and hearing about their work. I took a final picture at the end of my shift, when it was getting quieter in the Great Pavilion. 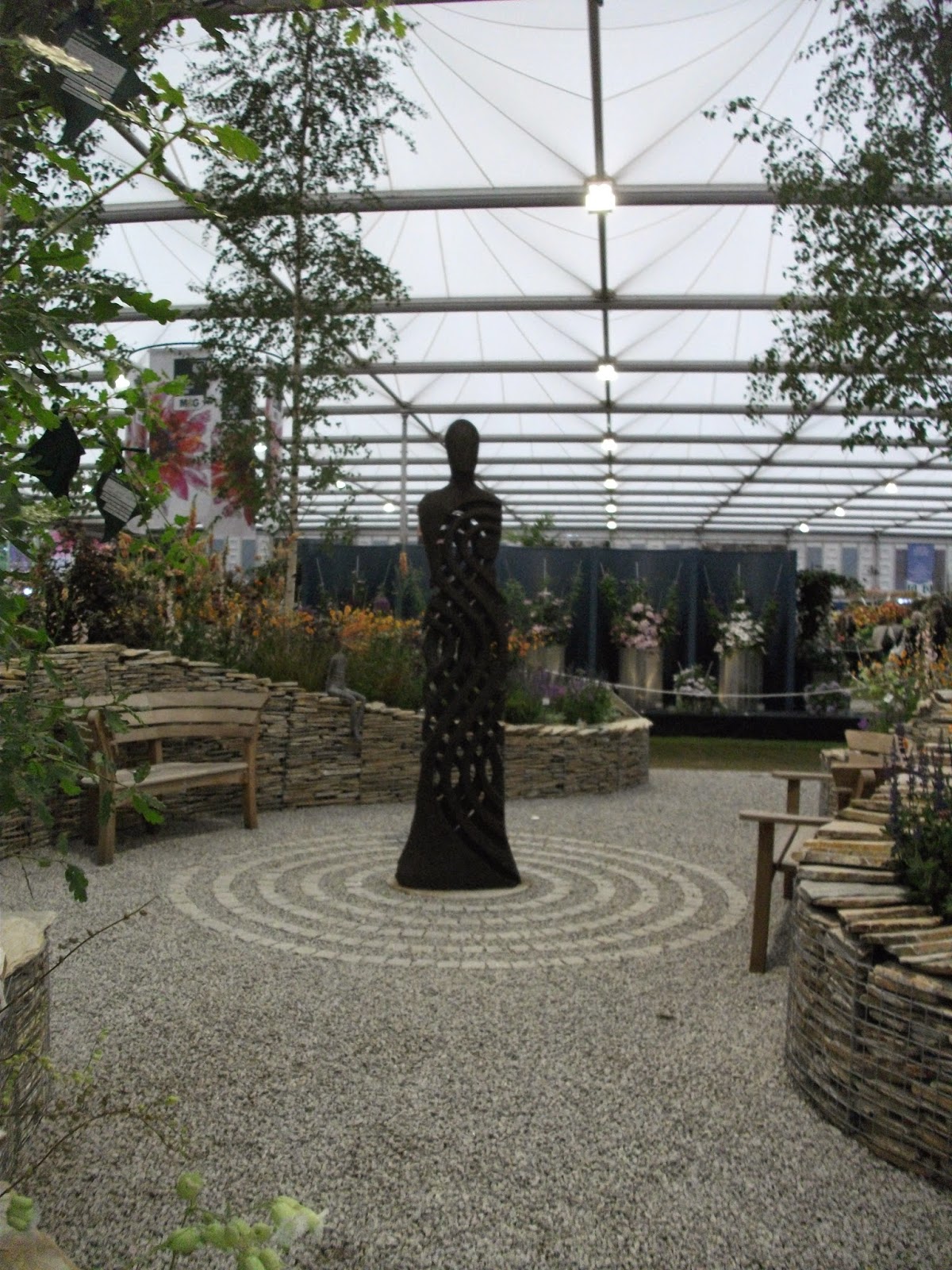 I was on the garden till 8pm but what a treat after that getting to see the gardens outside without the crowds, there were lots of corporate events going on but I managed to get another good look round all the gardens and as it got dark many of the gardens were lit, the best being Cleve West's garden. 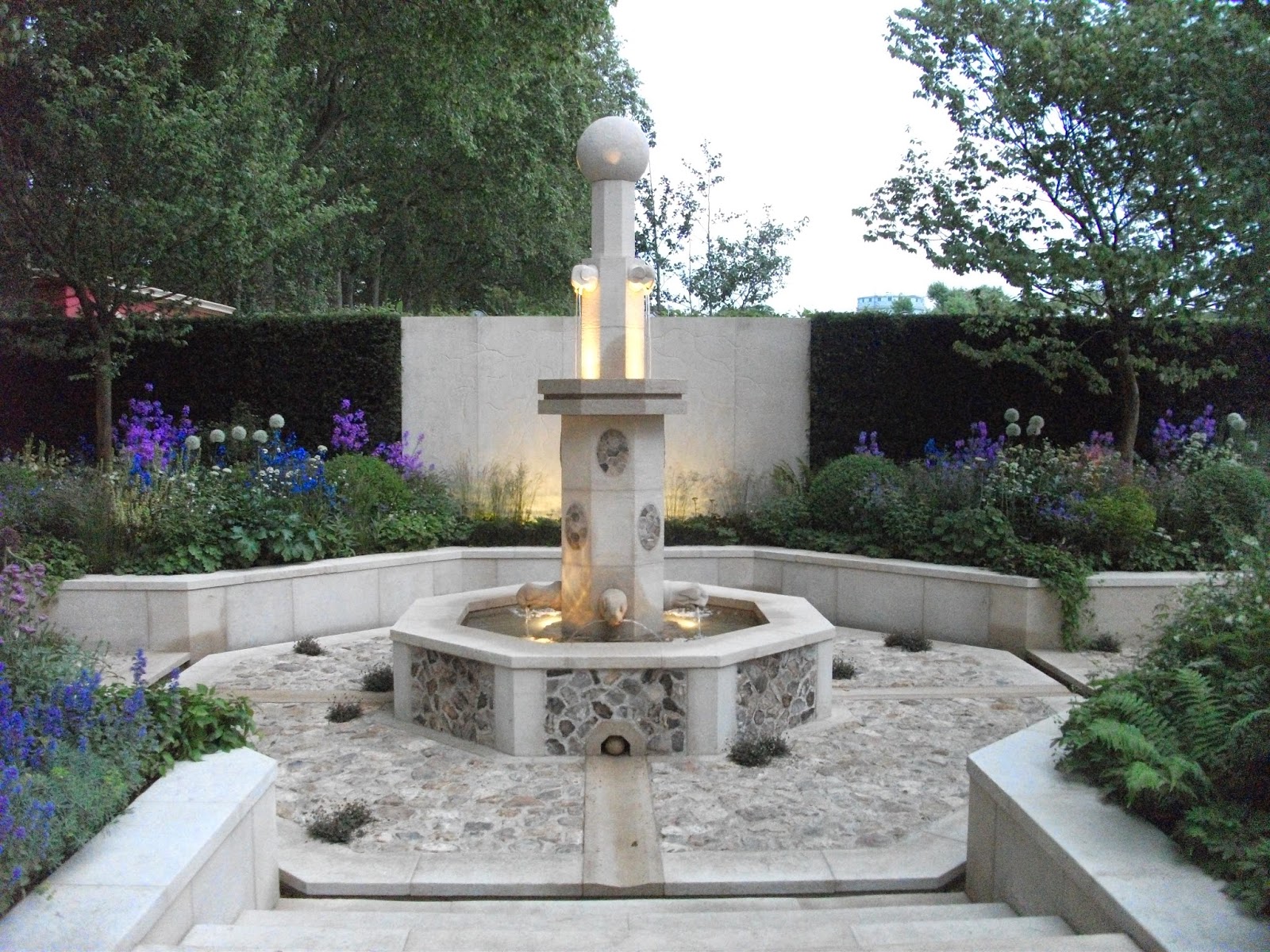 Then back to get some rest before the next day when I did a quick trip to Kew gardens and then I had afternoon tickets for the show, so back to the Royal Hospital Chelsea for a proper look round....
Posted by Annie_H at 22:15 5 comments:

Well one of my all time dreams has been realised this week, I've been going to the Chelsea Flower Show most years since 2004 but this year I'm getting a very special opportunity. As I've mentioned in previous posts, Perennial, the horticultural charity who own York Gate, the garden that I'm doing a years training at, are celebrating their 175th anniversary. To promote this there has been a garden at the Harrogate Spring Flower Show and now they are creating a walkthrough exhibit in the Great Pavilion at Chelsea, designed by Jo Thompson. The exhibit measure 10m by 12m and it has been supported by many horticultural bodies with most of the plants donated or on loan from Hardys Cottage Plants, Coblands nurseries and Majestic trees. Streetscape have been doing the hard landscaping. See their website to find out more about this amazing social enterprise. I spent Friday on the build of the exhibit helping "plant". Look how dirty my knees are to show how hard we worked! 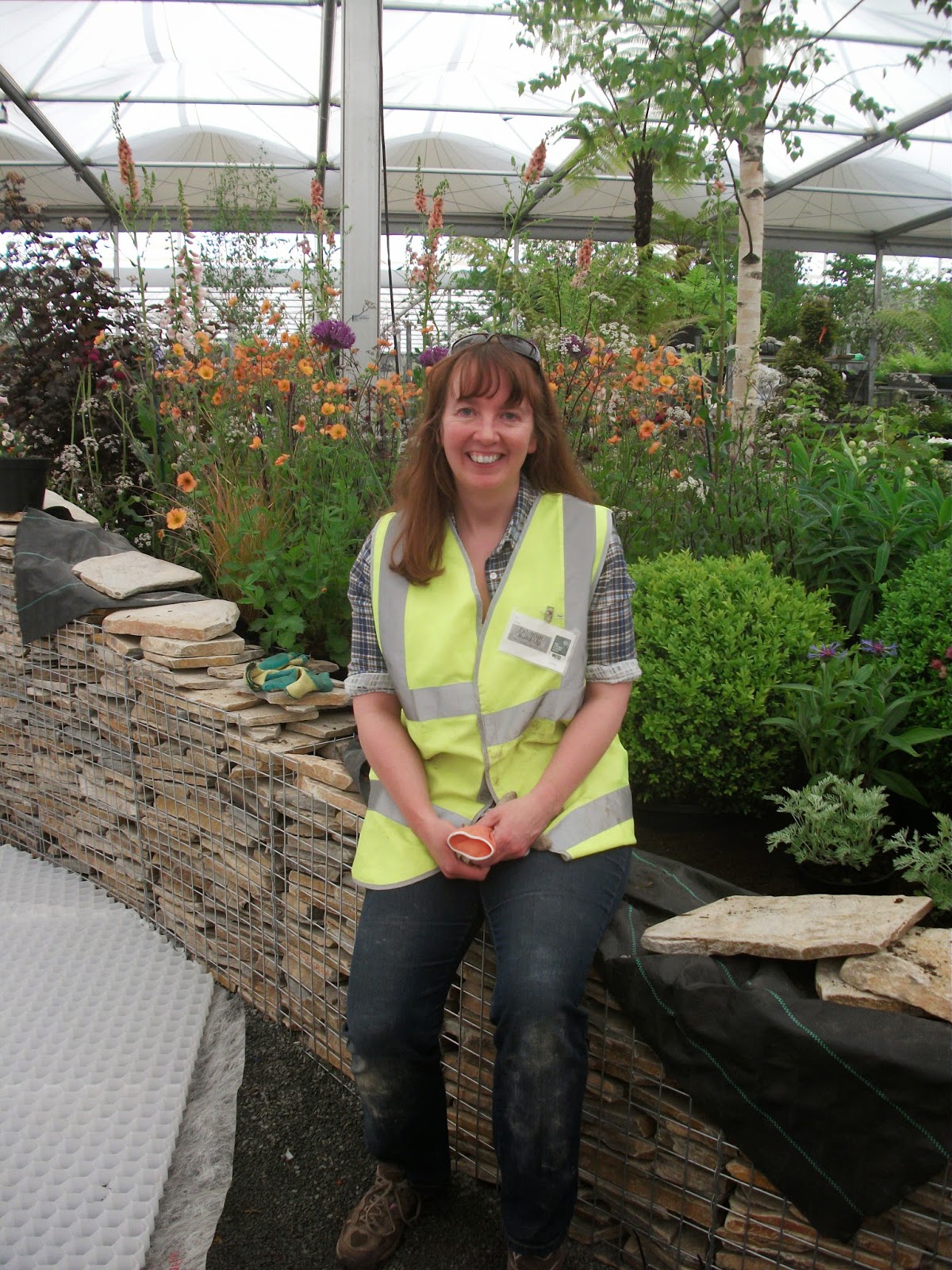 It was so exciting to be behind the scenes of the greatest flower show and be part of that hussle and bussle for a day. It was a busy day, I was exhausted by the end of it, forty winks on the train home was inevitable.
The design is inspired by Perennial's two gardens, York Gate and Fullers Mill and is shaped like Perennial's logo which is a Arum lily. This is definitely inspired by York Gate. 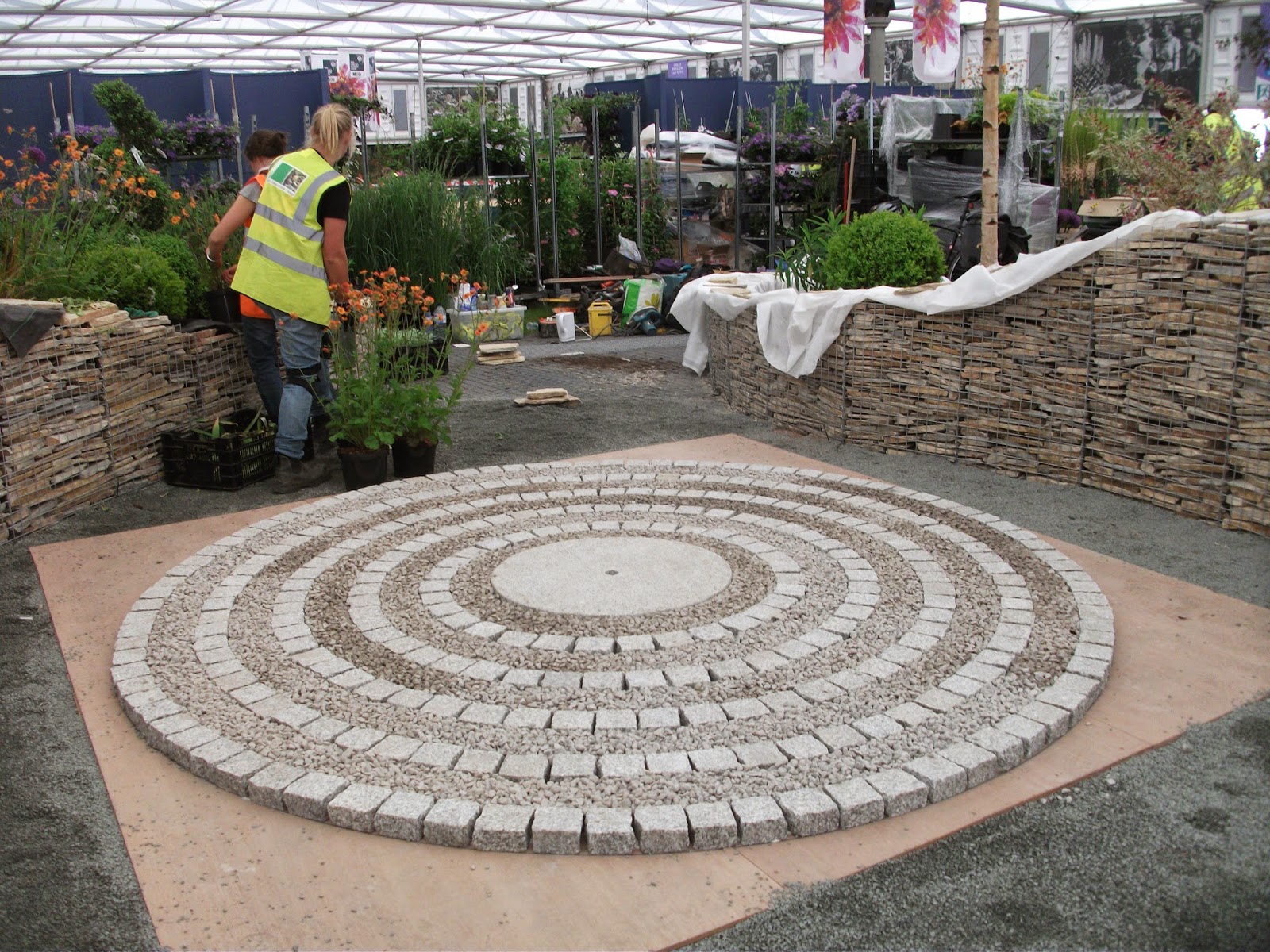 And the box spirals from the Herb garden at York Gate. 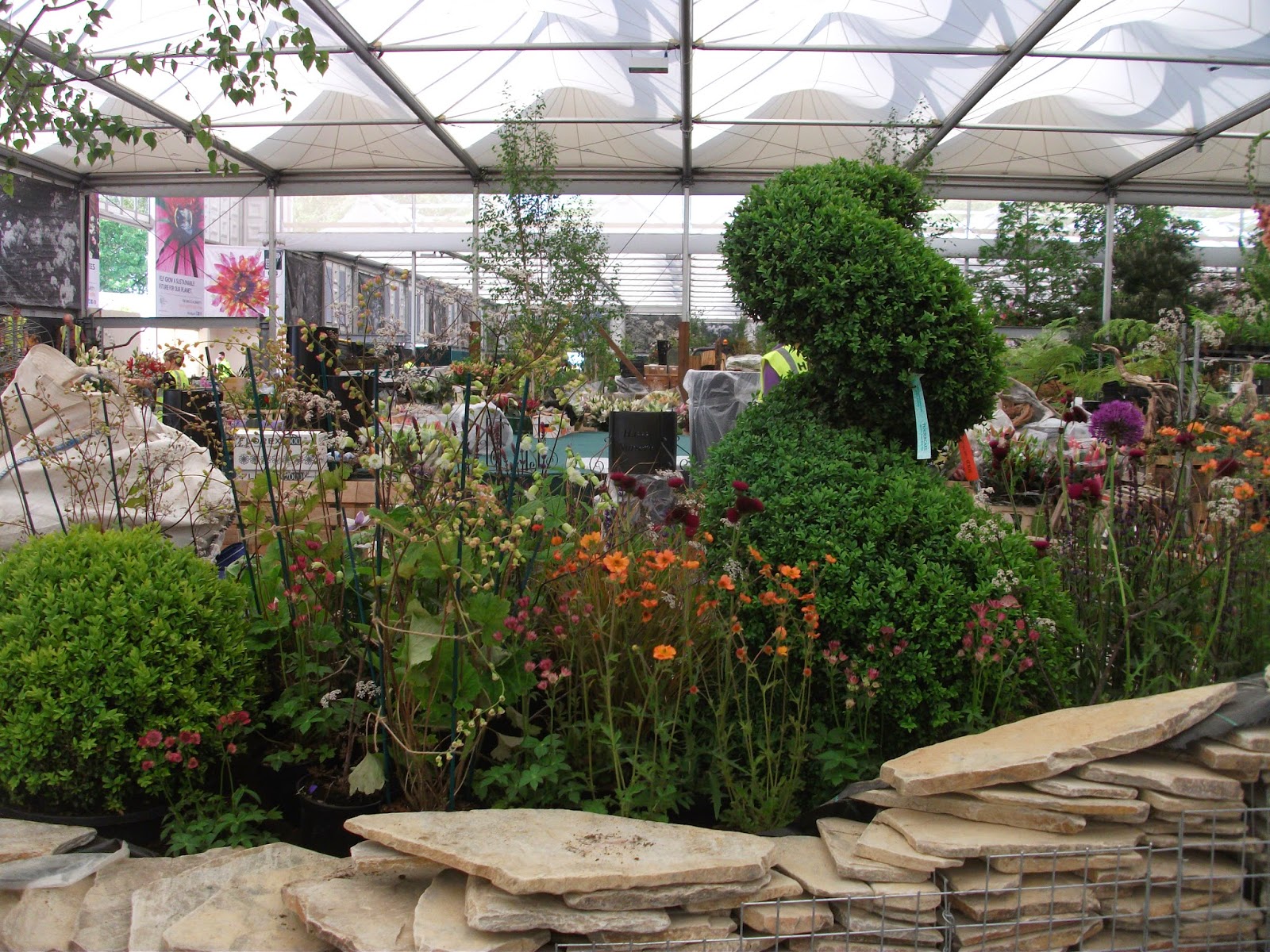 The underplanting the tall silver birches is spectacular. 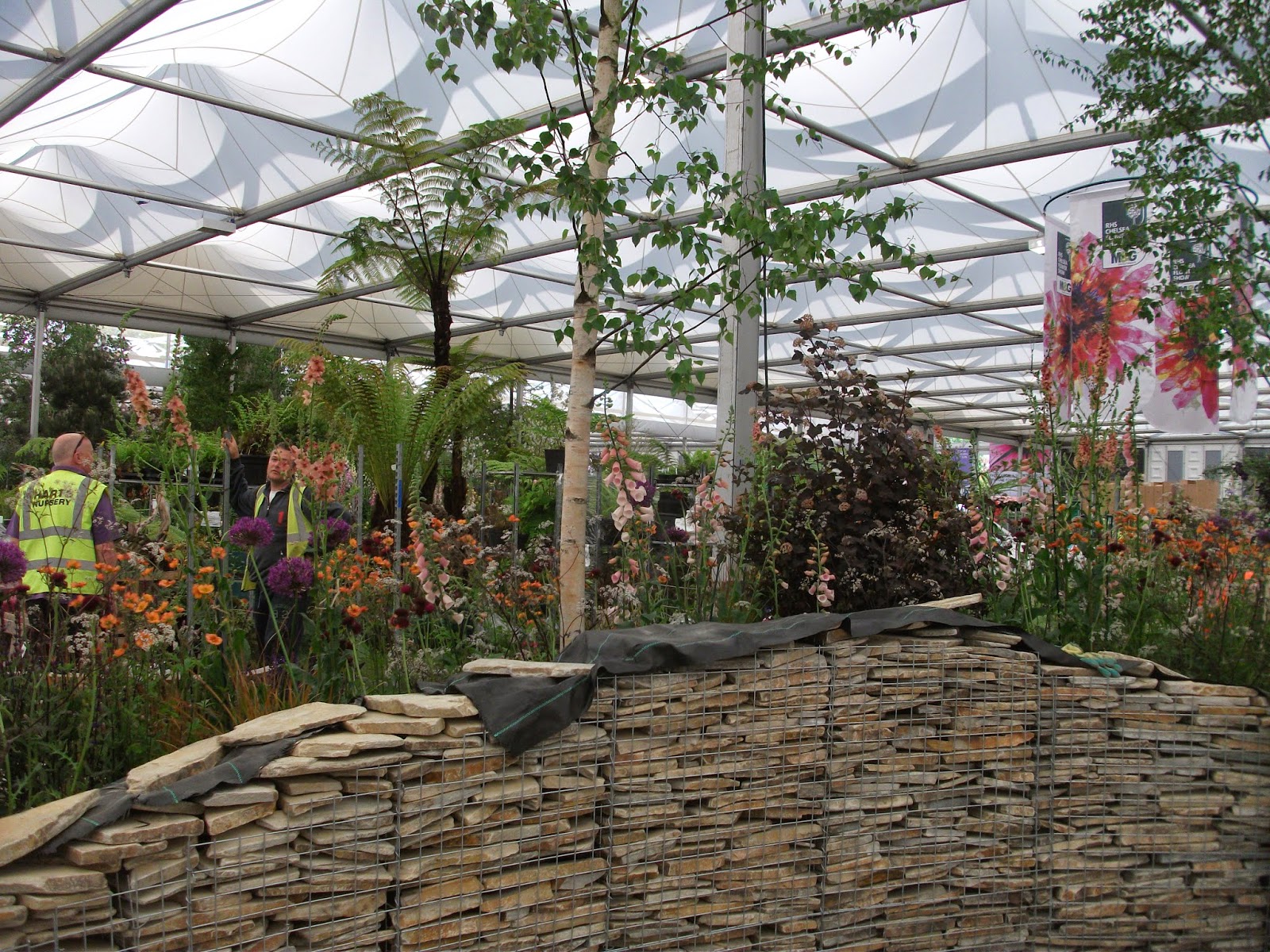 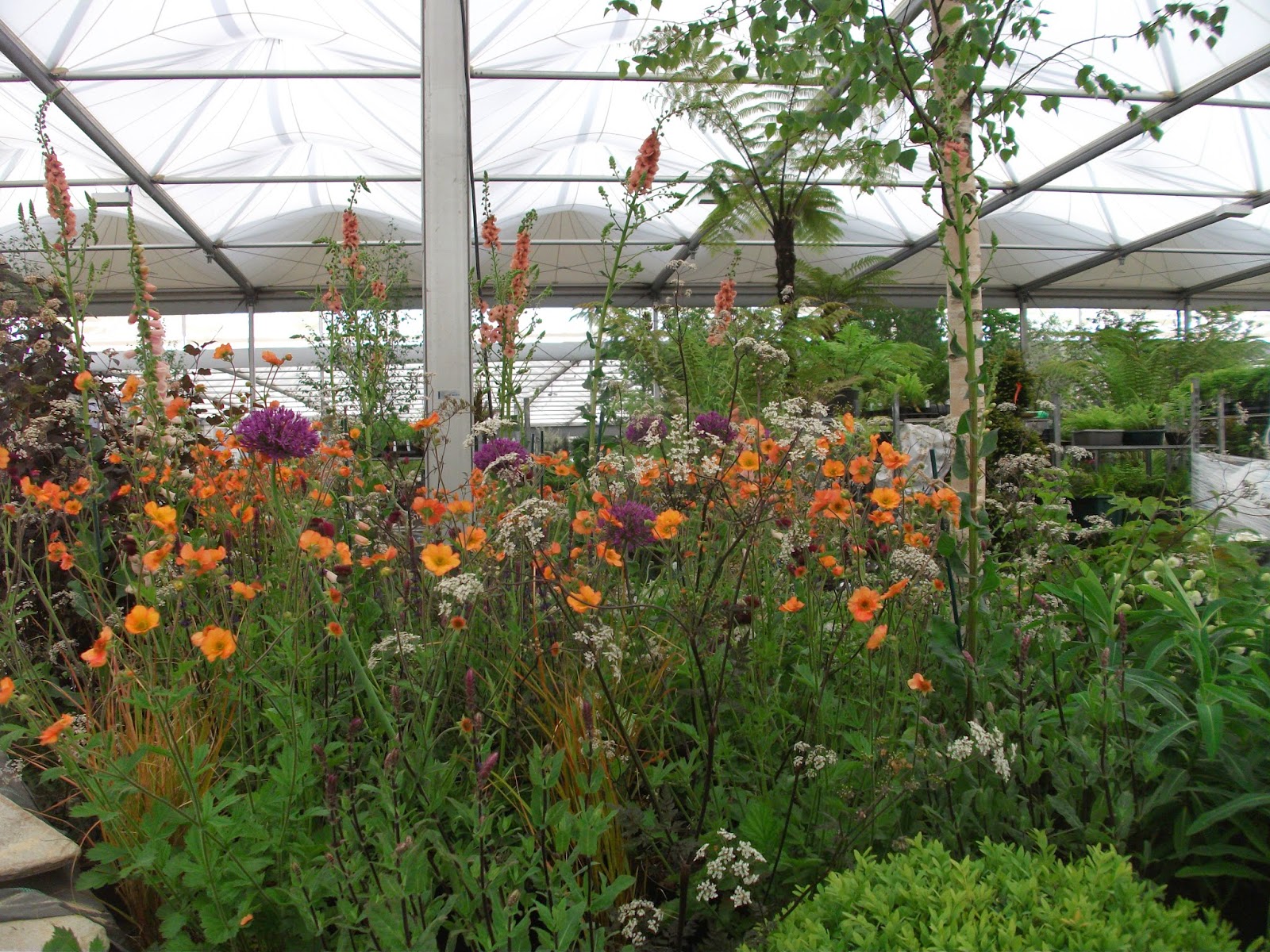 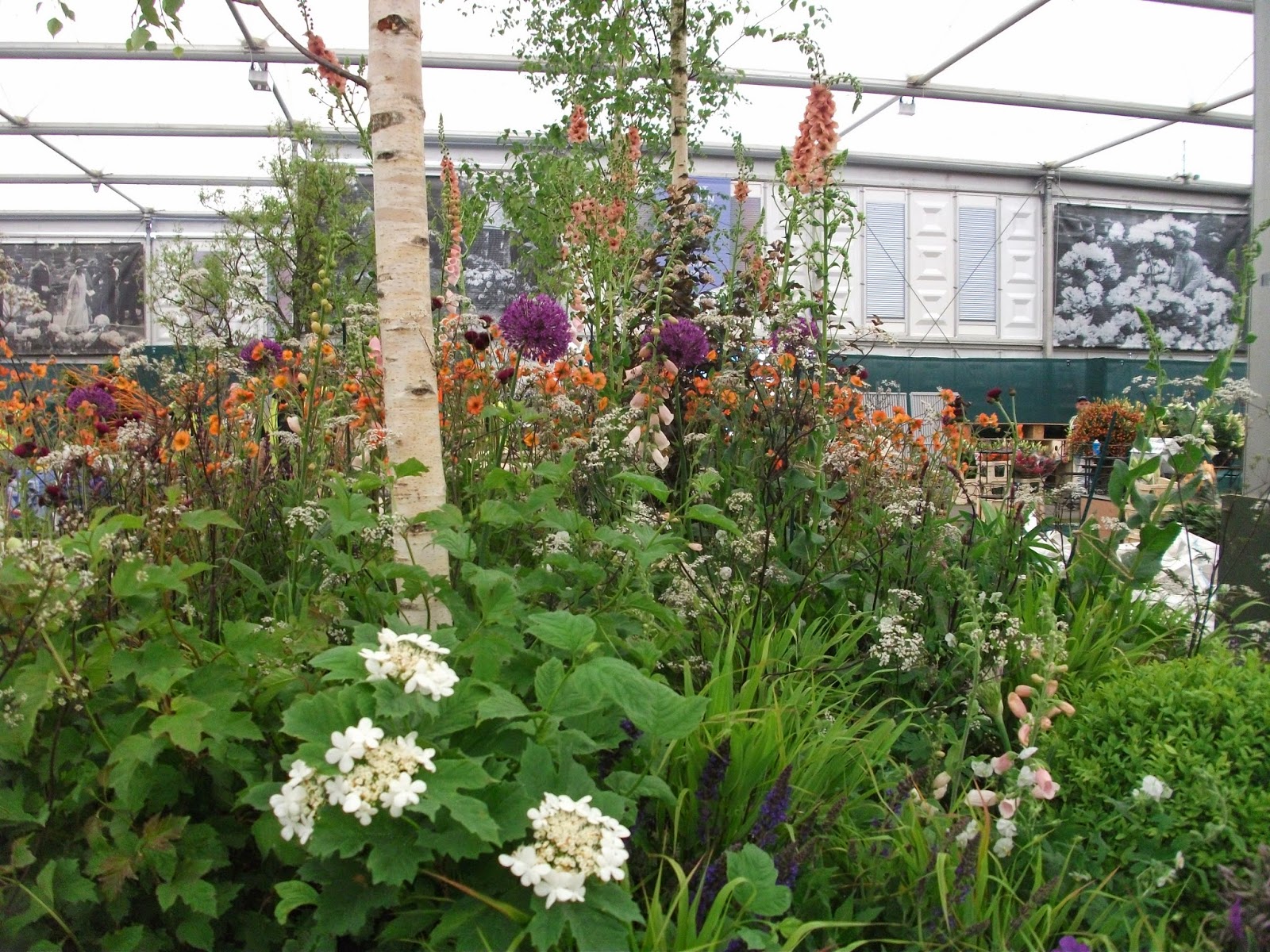 The key plants are Allium hollandicum, Anthriscus sylvestris 'Ravenswing', Digitalis purpurea 'Sutton's apricot', Geum 'Totally Tangerine', Verbascum 'Cotswold Beauty', Salvia nemorosa 'Caradonna'  and Silene fibriata.
I'll try and get better pictures next week.
We had some time to look round the Great Pavilion, which when inside all day is a heady mix of scents, we were next to Hart's nursery and all their lilies and we also kept getting wafts of roses. Heaven. Right next to us were Clematis. 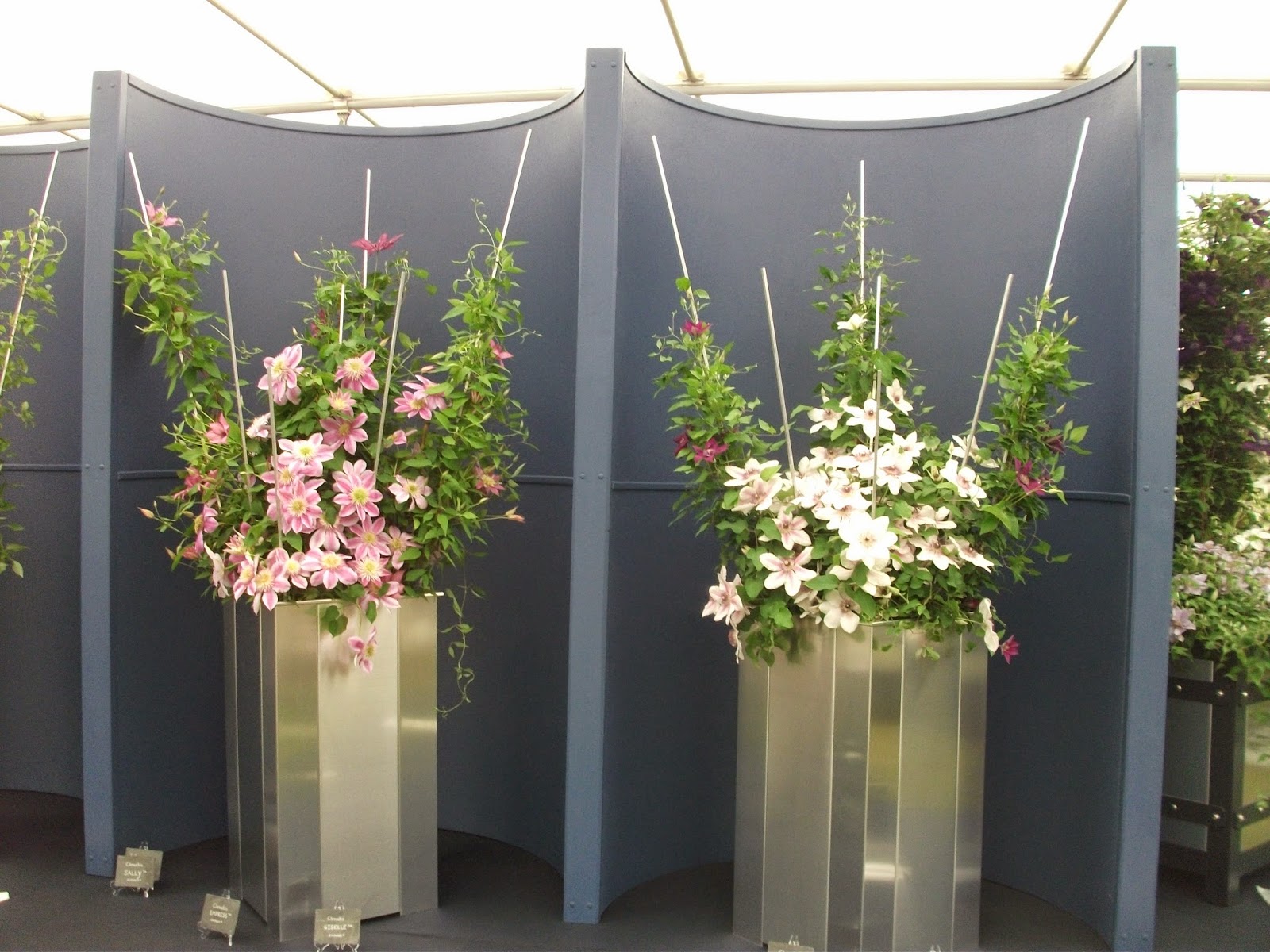 Each container took hours to assemble, painstakingly tying in the plants.
We were awe-inspired by the Thai stand. 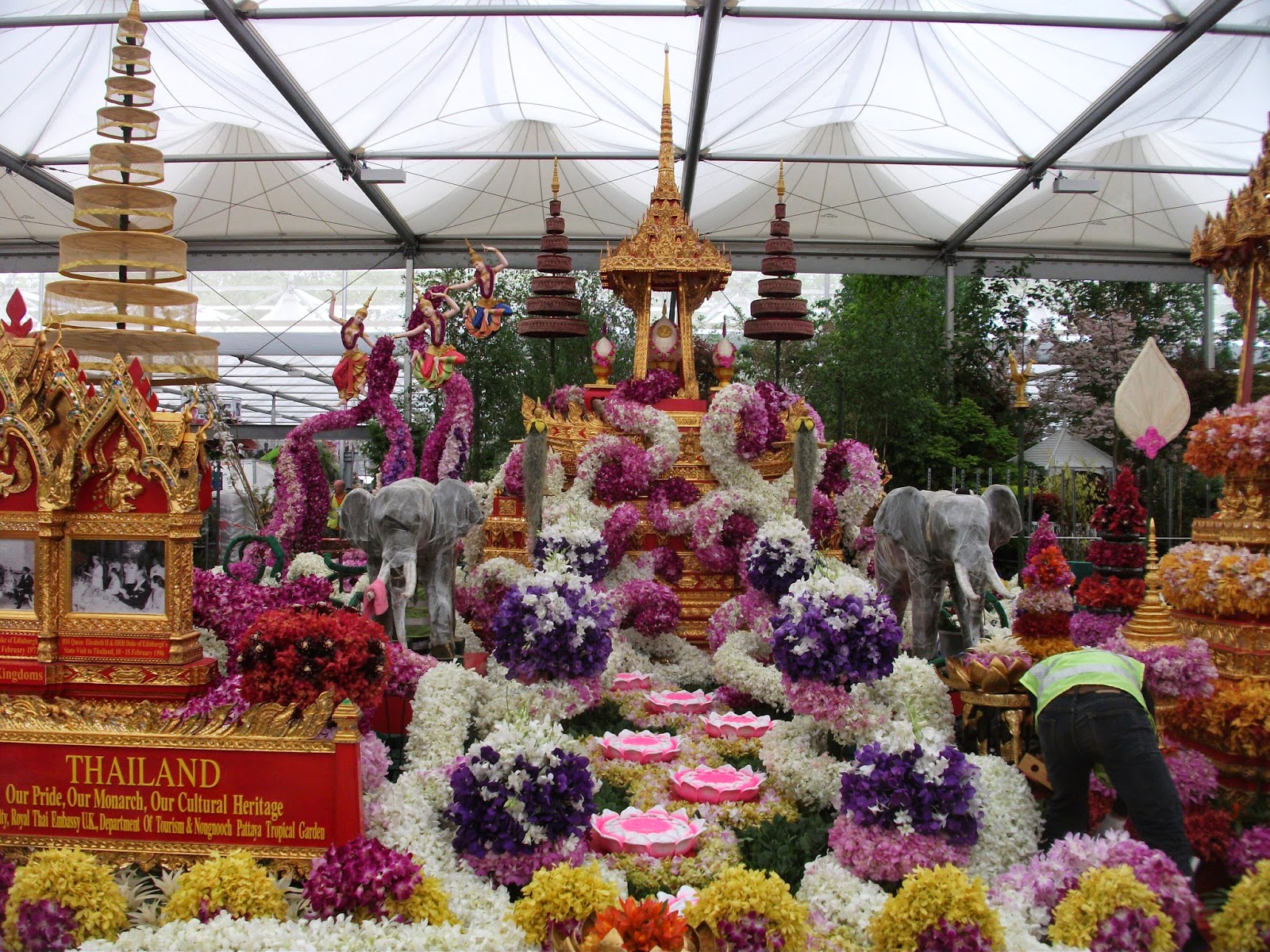 I hate to think how many orchids, but each one placed by hand into the soaked oasis.
We also had a sneaky peak at all the main avenue show gardens under preparation but all you see are masses of builders bums and hi-vis jackets galore. I'll save my pictures of the gardens for when I go down on Tuesday and Wednesday. I'll be on the garden telling people about Perennial, their work and their two fabulous gardens. Keeping fingers crossed for the judging.
There are pictures of the finished garden on Twitter (follow @PerennialGRBS) or Jo Thompson's Facebook page and more information here. I'll have more posts about Chelsea next week.