Phew thats Christmas done for another year. Its been a bit of a stressful one for me, but we've got through it and we are now into a New Year and I'm hoping for a better start to the year than the end to the last one. My dad is now out of hospital and is getting a bit better day by day though still quite frail, my mum is not well either but she is getting a little better now too so fingers crossed things are calming down for a while. Its been a tough time for us as a family though we are all close and pull together at these times. But it was a breath of fresh air to get up to the allotment for an hour yesterday afternoon. I don't know what I'd do without it, I know I've got my garden but I think the fact that the allotment is away from the house gives me that feeling of escape and getting away from it all. I was the only one there and I just pottered for a while, clearing away some old crops, digging up some leeks, taking down some wigwam supports but just being out and doing something with my hands and feeling the wind in my face was what I needed. 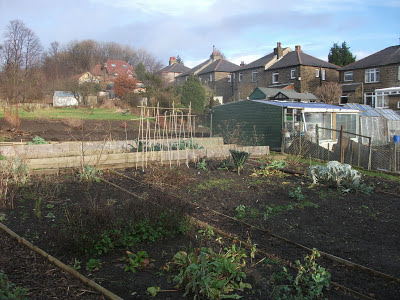 Its very wet as might be expected so no digging possible yet and I've still got some moving of muck to do but I'll try and get Martin to help me with that! 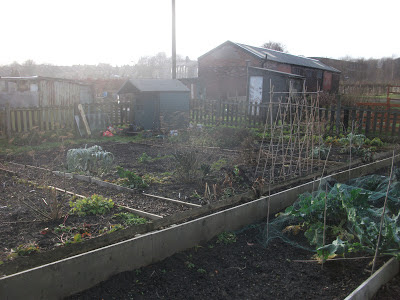 One surprise was with my Romanesco broccoli, this has been growing well all year but never produced a head until now! Three of the plants have now got small heads, two of which I've harvested, the other is still quite small so I'll leave that to keep growing. So just shows a bit of patience in this tough year (and the fact that it has been so mild) have enabled me to get a small harvest!
I had a number of garden related Christmas presents. 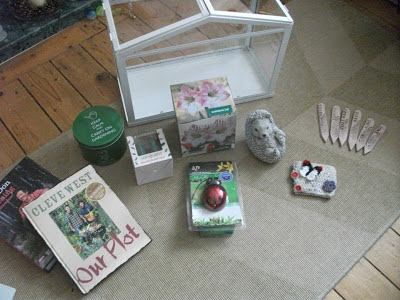 A little greenhouse which could be used as a cloche, some more gardening books (you can never have too many), an Amarylis bulb which I've never tried growing before. But my favourites were from my lovely crafting friend Amy, she made me a crochet mug warmer for keeping my cuppa warm at the plot. 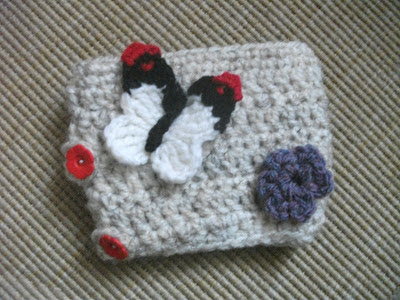 But best of all were these gorgeous plant markers for my herbs. 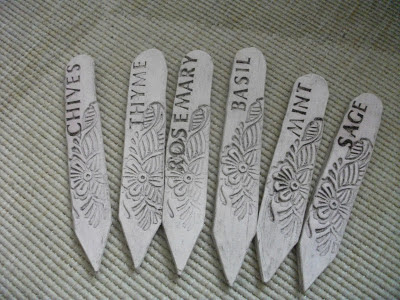 She made these in a pottery class that we went to together before Christmas, I made some hanging decorations and she made these. She's so clever, though I have to say she found it a challenge on the potters wheel which we both had a go at. Great fun and I hope to do the class again this year.
She also makes personalised cards too and some other crochet goods which she sells on her website on Folksy (http://folksy.com/shops/Craftabubble). She's only just getting started but have a look, she's got some lovely things.
I'm trying to fit in some new crafts this year and another present from a friend is encouraging me to have a go at some quilting, but might have to start small with a cushion maybe. 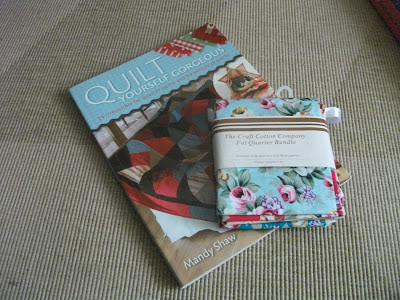 Need to introduce myself to my sewing machine again after I've dusted it down from the back of the cupboard!
But first, I'm off the rest of this week and my next job is to get together a bit of a plan for the up-coming growing season, sort my seeds and order any more that I might need (and many that I probably don't really need). I've not really had chance to reflect on last year's growing season, maybe thats wise, though some things did well. 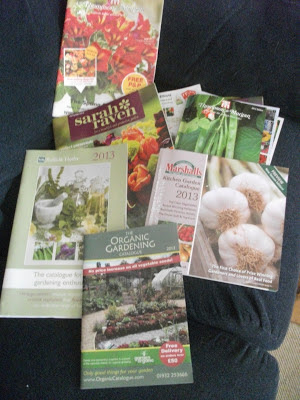