Woke up all this morning to hear the rain on the window, that was a nice sound. At times it has been great recently with rain at night and then sunshine during the day. Perfect weather for gardeners, we could just do with a bit more night time rain. We are never happy!
The last couple of years I have been developing a proper cut flower patch on my allotment. I love having flowers in the house and have been growing Sweet Peas on my plot for many years but there are many other annuals that are easy to grow from seed which can also make lovely cut flowers. I guess a lot of this was started by Sarah Raven who has developed such a mouthwatering catalogue, but many other seed companies stock a good range of cut-flower seed, I've used Chiltern seeds and Higgledy garden this year and been impressed with both.  I've also been inspired by Wellywoman's book The Cut Flower Patch.
It started in earnest last year when I put aside one of my long beds on my allotment for a cut flower patch. I'd planted some Sweet William, some Gladioli corms and then the rest of the patch was left for annuals which I grew in modules or seed trays and potted on to reasonable size before planting at the plot (to give them a head start and a chance against slugs). These could all be grown almost like a cut-and-come again crop, so the more you pick for the house the more flowers they produce. Last year my plot included cornflowers in black and blue, Nigella 'Midnight', Amberboa muricata, Cosmos 'Click Cranberries', 'Rubenza' and 'Diablo', Salvia 'Blue Clary', Ammi majus, Nicotiana 'Black Knight', Tithonia 'Torch' and Didiscus 'Blue Lace'. I had a row of sunflowers on the edge of the plot including 'Velvet Queen', 'Claret', 'Valentine' and Vanilla Ice'. I was amazed how great they were as cut flowers. Once the first main flower has gone over you cut the flower head off and they send out lots of new flowers, often on nice long stems. I was picking these well into October. Another revelation was the Amberboa, which flowered over a long time, lasted long in a vase and had a light scent. I loved the flowers of Didiscus but the young plants were also loved by slugs and I think I only ended up with a couple of plants, they also got a bit swamped by more vigorous flowers so I have learnt to give them a bit more space. They need a bit more cosseting.
One of my first flowers for cutting last year was the Sweet William, which I'd bought as plug plants and planted them the previous year. These lasted for weeks. 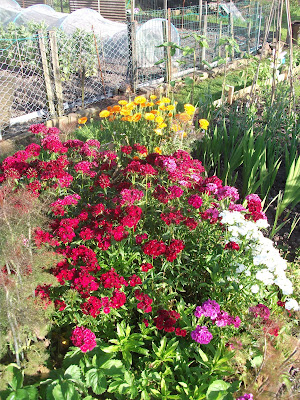 I didn't have any of these this year and I missed them so in May/June this year I sowed a batch of mixed colour seed. These have been pricked out and are now growing nicely. They will be planted at the plot in September and will hopefully flower for me next spring.
The cutting patch after the initial planting in 2014. 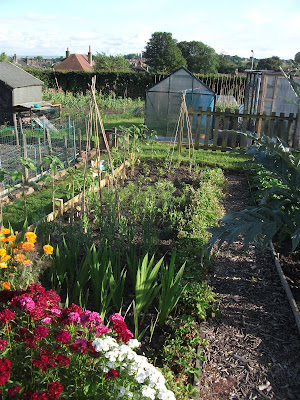 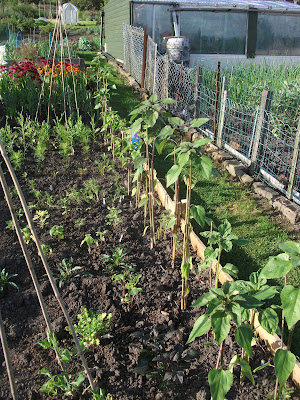 I had lots of flowers by July, the harvesting was in earnest. 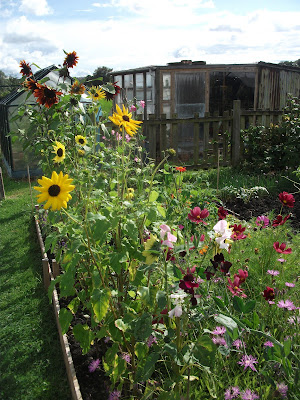 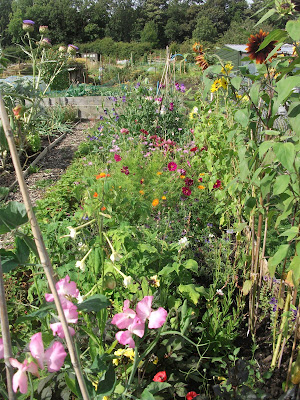 This was taken on the 10th October, and though it all looks a bit chaotic I was still picking flowers! 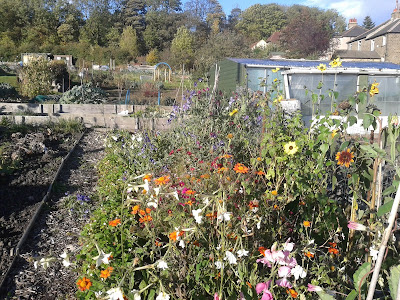 I wish I'd taken more pictures now of my arrangements but here is one. 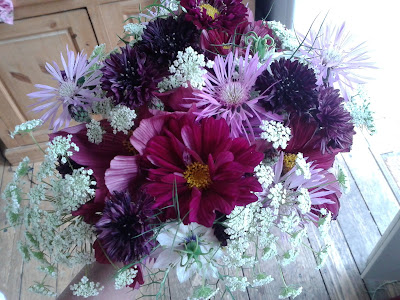 This year I'm trying to grow a few more varieties, I'm trying the annual Scabious, Vipers Bugloss, Corncockle, Ammi visnaga 'Casablanca', Gypsophilia elegans 'Kermesina', Bupleurum rotundifolium, some Zinnias 'Envy' and 'Mammoth', a few other Nigella varieties 'Delft Blue', 'African Bride', 'Albion Black Pod' and a grass called Panicum 'Frosted Explosion', a few additional Sunflower varieties including 'Sparky' and 'Moonwalker'. The sunflowers again line the edge of my patch but I've also spread onto another part of my plot. My cutting patch has expanded into half of another long bed. Plus I've got some Dahlia 'Bishops Children' which I'm going to plant to replace some of my early crops. I'm also trying to grow things more like a crop this year so in rows, with better spacing, as I get to see how the flowers grow.
My first sunflowers are out now. I've been cutting lots of Vipers Bugloss already. 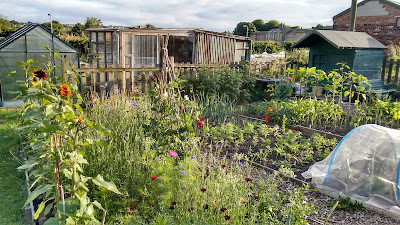 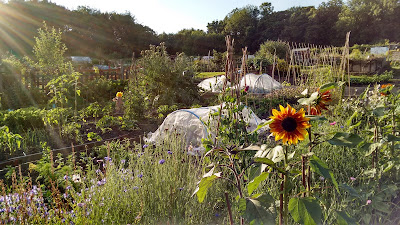 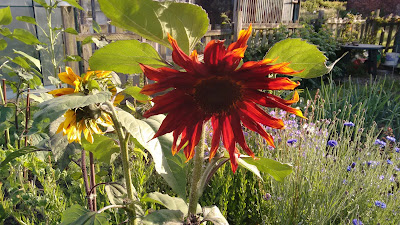 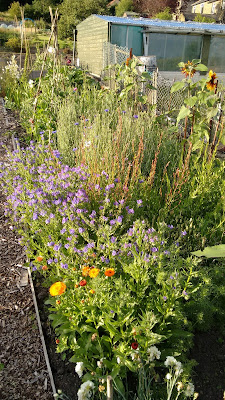 So just the start but I'll be seeing what works and what doesn't again this year.

I have a number of other plants on my plot that can be used as cut-flowers. I have chives that line the edges of nearly all of my beds, split from the original plants that I grew from seed, these go in my first few posies. They can be cut back hard after flowering and before they spread their seeds all round (I've learnt that lesson!). They have another added attraction of being a great bee and early butterfly plant. I keep trying to grow garlic chives which have lovely white flowers but I've struggled growing these from seed and even as pot plants that don't seem to thrive on my plot like the normal chive. 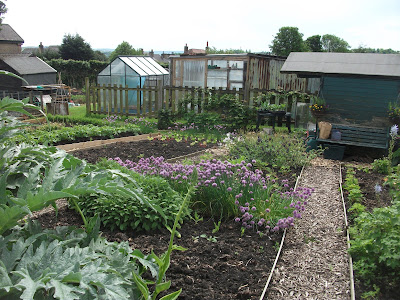 Another great plant that I've discovered as being great as a cut flower is the Purple Loosestrife which I have next to my rhubarb (I have to take care it doesn't get smothered in the spring. This is a perennial which is even better. It adds a vibrant pink to an arrangement. I've recently bought from Dove Cottage Nursery a paler pink variety which I think is Lythrum salicaria 'Blush'. So I'll see how that performs this year.
I have a couple of clumps of a dark red Astrantia which was given to me from one of the other plot holders after I admired it on their plot, which also is nice as a cutflower. So I'm trying to bulk that up a bit. I grew some Gaura lindheimeri 'The Bride' plants from seed last year, they came through the winter and are growing much stronger this year and flowering now. I also have a small patch of Dianthus 'Mrs Sinkins' which can look a bit straggly but I have used a bit this year in combination with the dark black cornflower to create a nice black and white mix. It has a lovely clove scent. I like the idea of having a few more perennial plants for cutting.
I often top up my bouquets with plants from my garden, such as Alchemilla mollis (which I have a love/hate relationship with, as it seeds all over my garden, I now make sure to cut flowers off before they go to seed), Linaria purpurea (and its lovely pale pink variety 'Canon Went'), Scabious, Knautia macedonica to name a few.

I'm loving learning and developing this and have a few plans for next year, one being that to cut down on all the spring sowing I'm going to try sowing some of the hardy annuals like Cornflowers, Nigella and Scabious in the autumn and overwinter them in my garden greenhouse. The idea is these will give me a head start next year, not only in sowing but hopefully also with flowering. But this is an experiment so we'll see.
So an exciting flower harvesting year ahead of me, I have a feeling my cutting patch might extend to even more of my allotment next year!