Storm Frank is starting to get going now so hunkering down for the day, no plans on going anywhere. I'm in my back bedroom and I've been sorting out my photos that I've taken this year. Where has the time gone, I really struggled to find the time to organise them this year and some I'm only just taking off my camera but its nice to look back at them and I might do some belated blog posts about some of the garden visits that I've been on this year.

I hope you've all managed to have a relaxing Christmas break, I'm making the most of mine, lots of reading, watching films, things I just don't tend to have the time to do at any other time of the year. I particularly like reading my gardening books at this time of year. I've had a few on the go throughout the year, two Monty Don books (The Ivington Diaries and Gardening at Longmeadow) and one by Carol Klein 'Life in a Cottage Garden'. They are written almost in diary form so I've been reading each month by month sort of, though more often chunks at a time to catch up. I've finally finished Gardening at Longmeadow as December comes to an end. I do like his writing, probably more than I like him on Gardeners World. Tend to watch that more for Nigel. But have you seen Monty's new dog? If you follow him on Twitter you will have seen he has a new puppy called Nell!! Gorgeous.

I've had a couple of new books for Christmas, The Crafted Garden by Louise Curley, otherwise known as Wellywoman looking forward to being inspired to be more creative in my garden and the latest book by Georgie Newbury, more inspiration for my cut flower patch. My bedside books for 2016 will also be Dan Pearson's Home Ground, Joy Larkcom's Creative Vegetable Gardening and Helen Yemm's Thorny Problems. I think I'm sorted till next Christmas now.
My friend also bought me a book on the meaning of flowers which is an interesting one. I find it fascinating though confusing with lots of different versions out there. This concept of the language of flowers was especially popular in Victorian times, with the giving of Tussie-mussies, small posies of flowers the content of which had much meaning.

But on Monday I went to visit an exhibition which truly emphasises the power of flowers as symbols. I went to the Poppies: Wave sculpture at Yorkshire Sculpture Park. It is a wave of poppies arching over the Cascade Bridge in the park. At once, stunning and moving, on a gloomy Yorkshire day. We approached from the lake side. 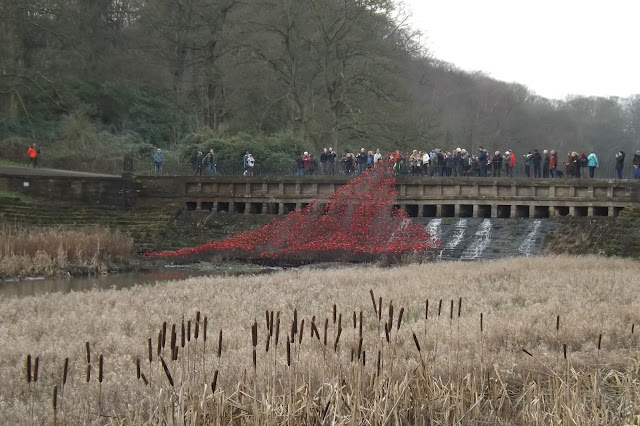 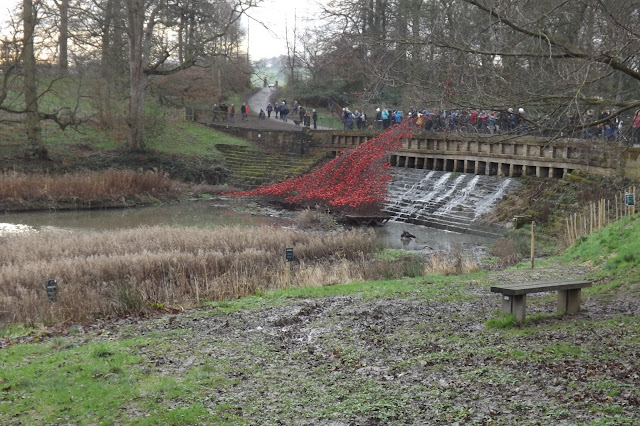 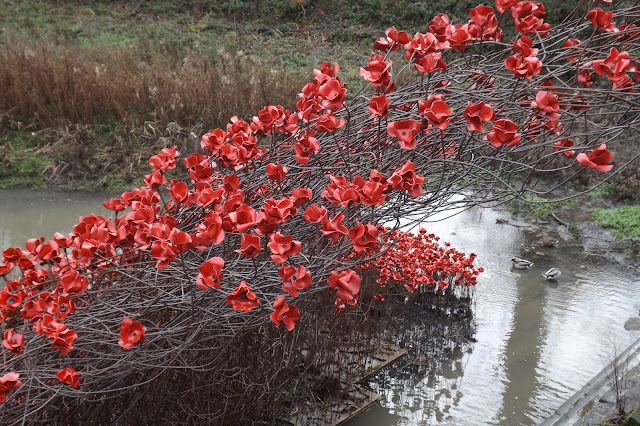 These poppies were initially seen in that amazing display at the Tower of London, which marked the centenary of the outbreak of the First World War. Its estimated that 5 million people visited the exhibit in London and many wanted the exhibit to stay there longer but the artist and designers always wanted it to be transient, however they decided that parts of it, the wave section and the weeping window segments, would be displayed at sites around the UK before finally being installed in the Imperial War Museums in London and Manchester. There were so many people there to visit this, I've never seen the sculpture park so busy. 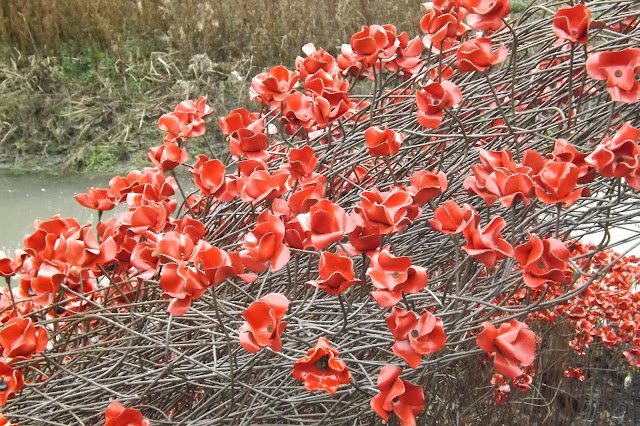 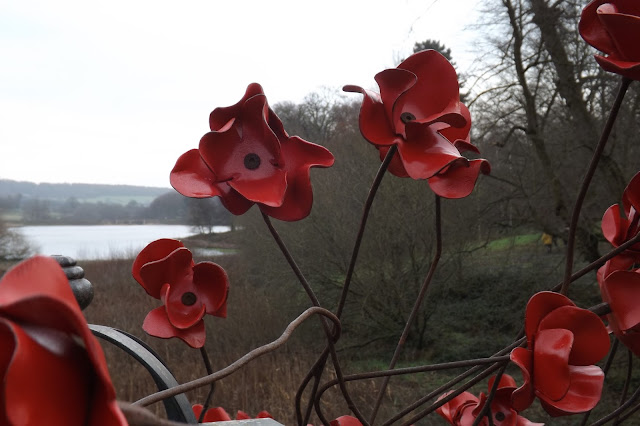 I love the YSP anyway, especially in winter, though its becoming a bit of a victim of its own success, and of the weather too. Many of the sculptures were temporarily fenced off, at least I hope its only temporary. Because of all the rain, the ground was sodden and there was lots of mud in places so they've stopped people going on some parts of the grass, to protect it. As I say I hope it is only temporary as that is one of the joys of the park in that you can get up close to touch the sculptures. You couldn't walk round the lake either as they have closed the bridge at the top end of the lower lake so you can't do the usual circular walk. But this is while they do work on the bridge so hopefully this will be open again for the summer.
Its always worth a visit at any time of year but the Poppy exhibition is only on until the 10th January 2016 so you'll have to hurry if you want to see this.