Its a grey windy day here in Huddersfield and I'm quite glad to be inside looking through my photos from Chelsea. It was a busy couple of days and tiring but I was very lucky to have two days there. Its my treat of the year, a real celebration of Britain's love of gardening. I know it gets busy but you can time it and get to see everything. On the Tuesday I was helping Sue Beesley on her stand in the Great Pavilion, she had a lovely display of shade loving perennials. 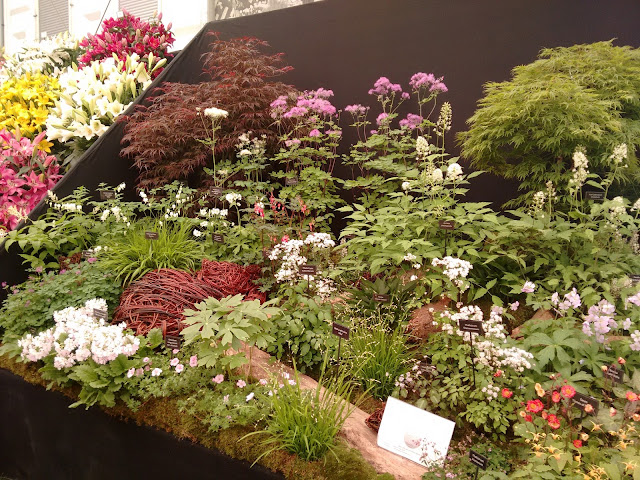 In only her second time at Chelsea she got a silver medal which she was happy with, the judge came round while I was there to give feedback and it was positive on the whole, he said that most of the plants were gold medal quality, there were just some issues with the presentation. There were gaps in height at the back of the display and some were too close to each other, they also thought the willow cat was a bit big for the display. Sue would prefer to get an island stand for the plants that she displays, as they are often small and delicate and deserve close inspection which you can't really get with this type of display. But Sue has learnt lots and standing by the display we got lots of feedback and interest. People seem to love the Thalictrums which are fabulous plants for shade, giving height and gorgeous ferny-like foliage and airy flowers (and most importantly slugs don't tend to like them!). Another popular plant were this Primula. 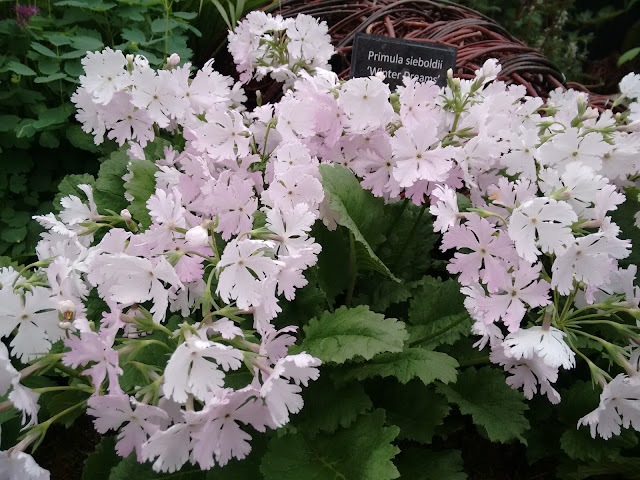 Primula sieboldii 'Winter Dreams', isn't it lovely. Unusual foliage for a Primula and soft-pink flowers like a snowflake. I had many discussions with people about the renaming of Dicentra spectabilis to Lamprocapnos spectabilis, yes doesn't it just roll off your tongue. The display contained the white form and also a newish variety called 'Valentine' which has dark red flowers and dark burgundy stems.
Sue is specialising in Thalictrums at her nursery and she displayed a range of varieties, from the tall varieties such as Thalictrum 'Black Stockings' which has dark purple star-like flowers and dark almost black stems to small delicate varieties such as Thalictrum ichangense which is a tiny variety with unusual foliage and the pinky white star-like flowers of the genus. 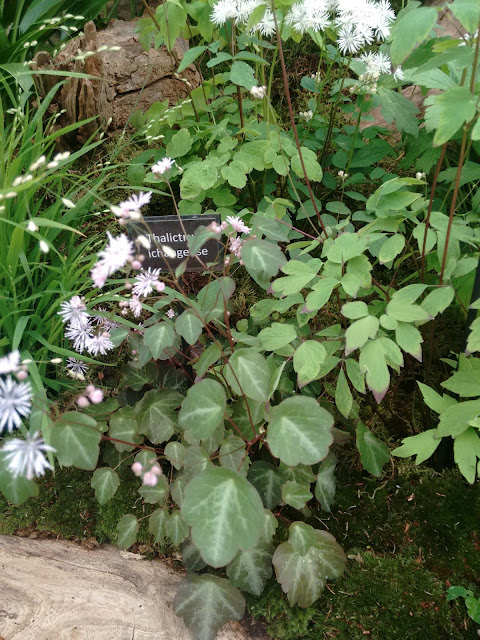 You can see from the very top picture that the Bluebell Cottage Nursery stand was right next to a display of lilies. Two more contrasting displays you will ever see! The scent was very strong and a bit much after a few hours!!
On the Wednesday when I got there at just after 8am the show gardens were already busy so I headed for the peace and tranquility of the Great Pavilion and it was really quiet. There had been long queues previously to go into the Bowdens display which was taking the usual place of Hilliers nursery in the centre of the marquee at the monument site. I'm sure you saw this on the TV coverage it was the one with the train carriage, the Belmond British Pullman. The concept was that you stepped onto the train from a typical English country station and leave the train onto a lush, exotic rainforest, with tree ferns and bamboos. It was a great idea and really popular but I had it almost to myself that morning what a treat. 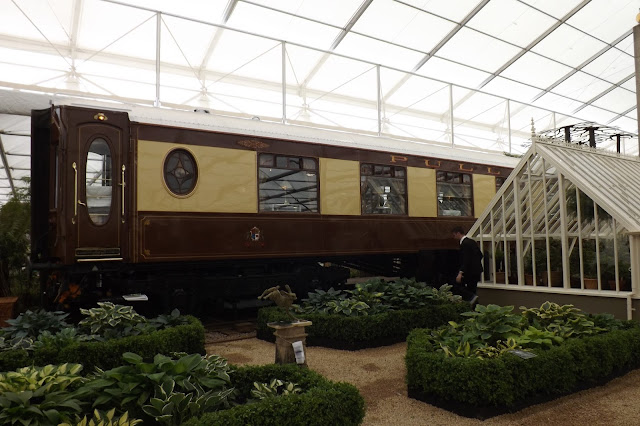 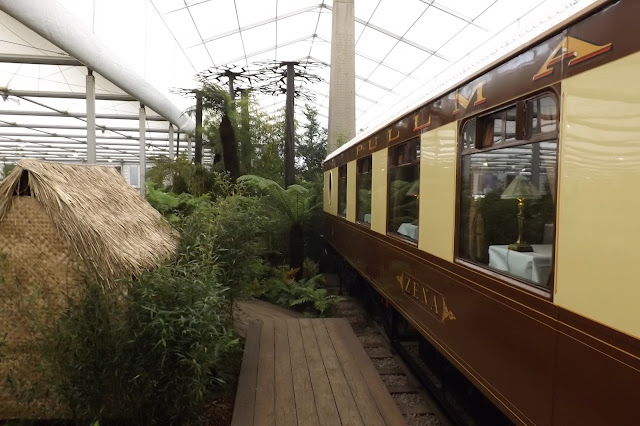 Another popular display in the pavilion was that from Birmingham City Council. Rare these days to see council displays and they are one of the few councils left that grow their own plants for shows and for their parks and displays. Their display was a bit odd in celebrating sport but also collaborating with an amazing artist called Willard Wigan who makes small sculptures in the eye of a needle!! Crazy stuff and they had set up little microscopes round their display to show the work. There was then a larger version on the stand. Bit bonkers but certainly a talking point. 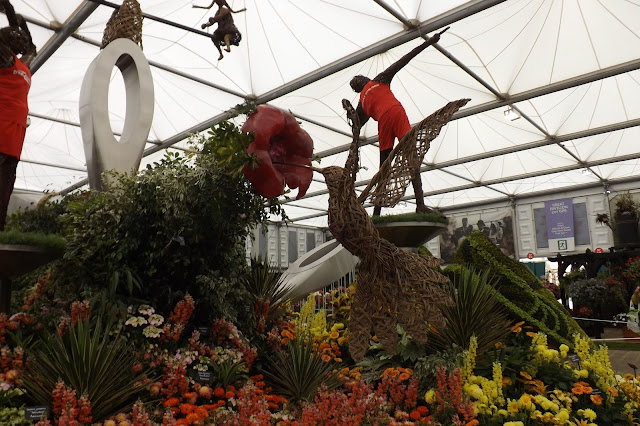 The flower arranging displays as always were impressive. Especially the display by New Covent Garden market, who were making their debut at Chelsea. With one side showing the work of the market with a wall of black flower buckets highlighting the range of flowers and foliage. 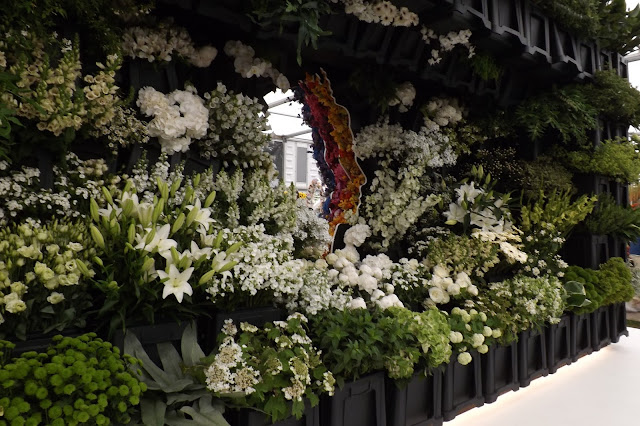 But then on the other side is a modern sculpture of the Queen's head with layers of colours and flowers against a white background, a tribute to the Queen's 90th Birthday. 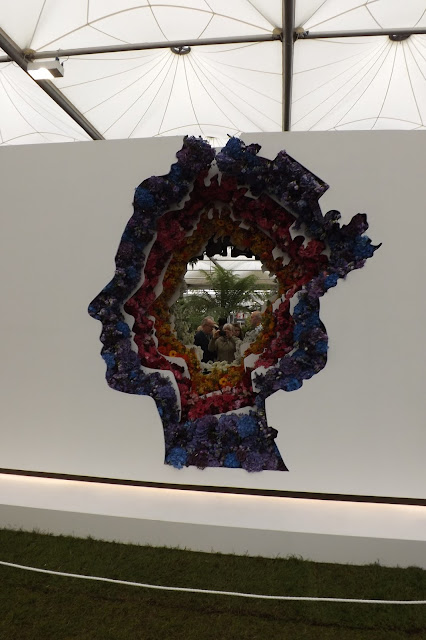 Fabulous, and well worthy of the Gold medal.
The NAFAS display was a Victorian revival 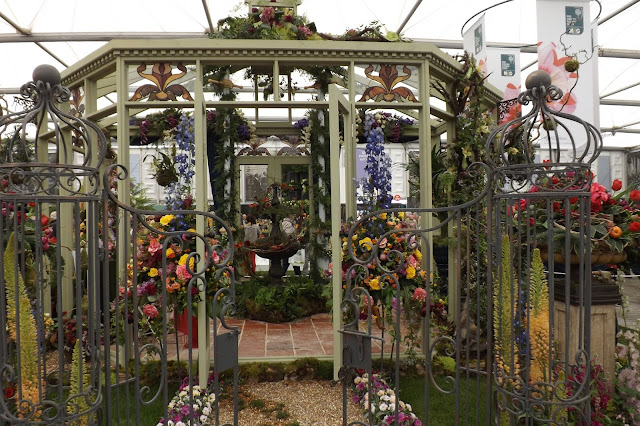 But one one piece stood out for me, look at this, a little pouffe footstool made from Stachys byzantina leaves (otherwise known as Lambs ears!), gorgeous. 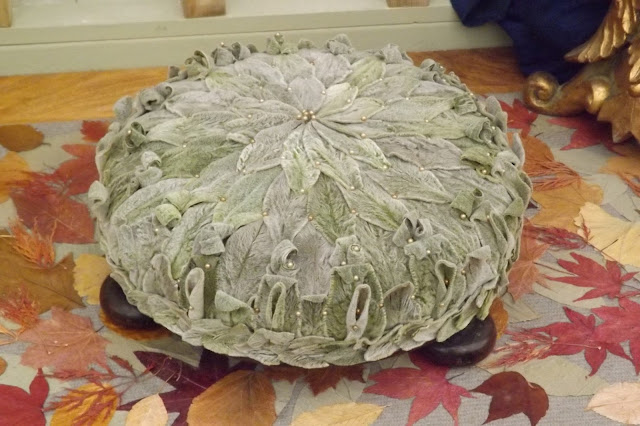 There was a definite change in the pavilion this year regarding some of the plant displays there was a clear move towards the use of props and I think this was a bit hit and miss. I do wonder what traditionalists will think of this. My feeling is that it worked sometimes but less so with others and it is a fine balance between them helping to show off your plants and detracting from them!! I think some of it is needed as I've been to Chelsea for many years now and some displays are exactly the same every year. So for example a display from Blackmore and Langdon (who have shown at every single Chelsea Flower Show since 1913) of Delphiniums and Begonias is a fantastic display, though like Monty I'm not a great fan of the big Begonias, but isn't it the same each year and to be honest I think I just whizz by these displays. Maybe its the displays that show only one type of plant, I also don't go a bundle on the displays of Chrysanthemums, Gladioli or Lilies. Even the tulips, though they can give you ideas of varieties to choose. But some nurserys were using more props to highlight their plants, such as Heucheraholics who displayed their plants around some colourful beach huts. I think this worked and the plants were definitely the stars but then I wasn't so keen on a display by Primrose Hall nursery who had a display of paeonies, one of my favourite flowers, but the display had a big Chaise-Longue in the centre and not many plants!! Apart from the flower heads in a bunch at the bottom. Didn't take a very good picture, I apologise. I know that nurserys are being encouraged by the RHS to work with designers to develop these displays but I don't think this one quite worked. The plants should still be the stars of the show and I didn't think the balance was quite right on this one. 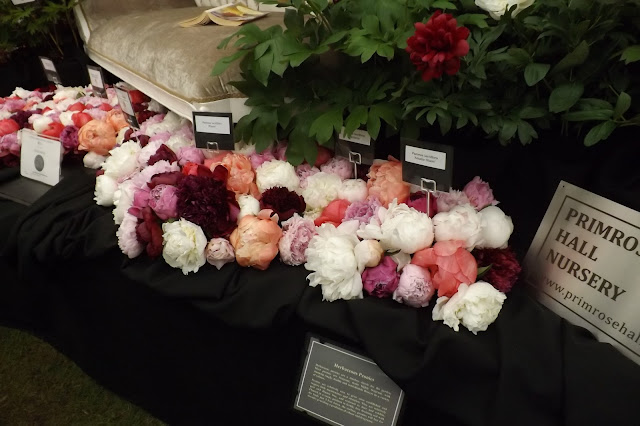 No my favourite displays tend to be those that have a mixture of perennials, such as Hardy's, Barnsdale Plants, Culm View Nursery or Claire Austin's stand. I also like the displays of alpine plants in troughs and pots. I loved the display by Kevock Garden Plants, I was fascinated by the range of Primula species, and I spent a good few minutes going round this stand. 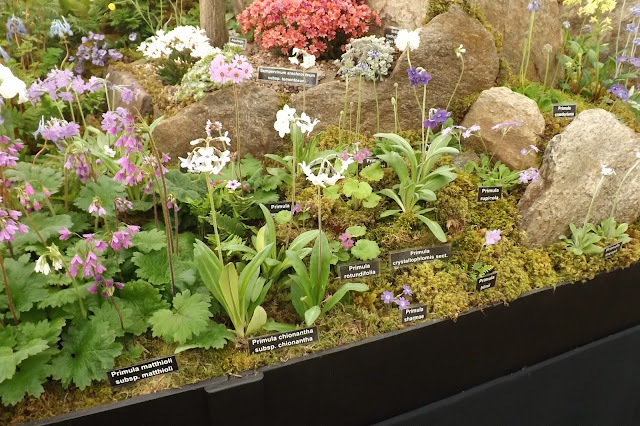 They had a stunning display of Blue poppies, which I can only dream about growing but lovely to see it in its prime. 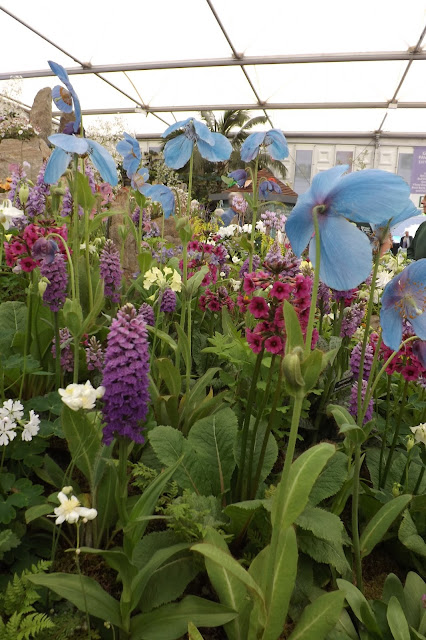 Having said that I prefer stands with mixed plants, the stand out display in the Pavilion this year was a display of a single genus. This was a display by Ashwood nurseries of Hepatica's. What an amazing display and far and away the best in the pavilion and rightly so the winners of the Diamond Jubilee award for best exhibit in the pavilion. What a challenge this would have been to bring these early spring flowers to a late spring flower show. But the display showed off these jewel like flowers to their best in a mini-woodland setting. All set at the perfect height to inspect their delicate blooms. A real delight and if you saw the interview by Carol Klein with John Massey, the nursery owner, you will have seen what it meant to him. A real dream come true. 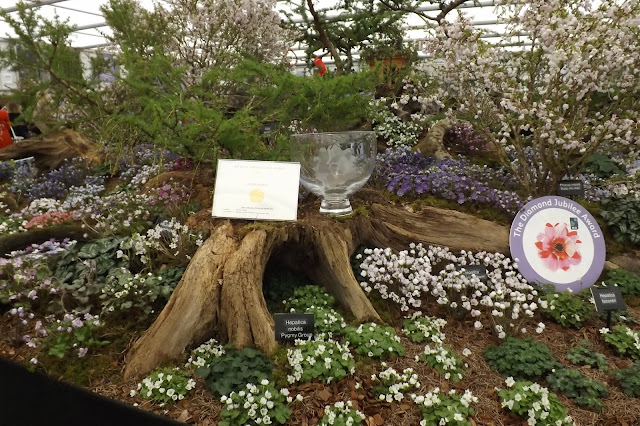 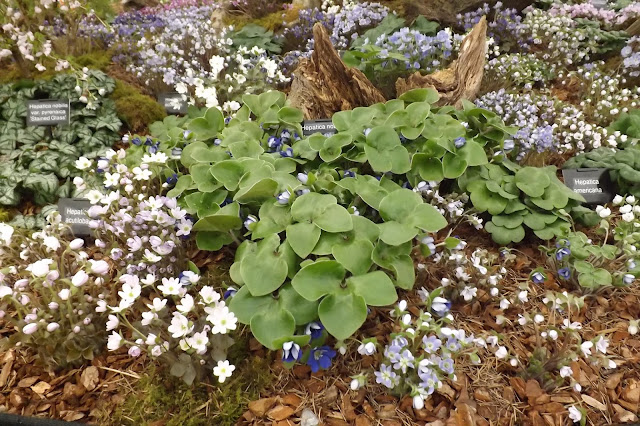 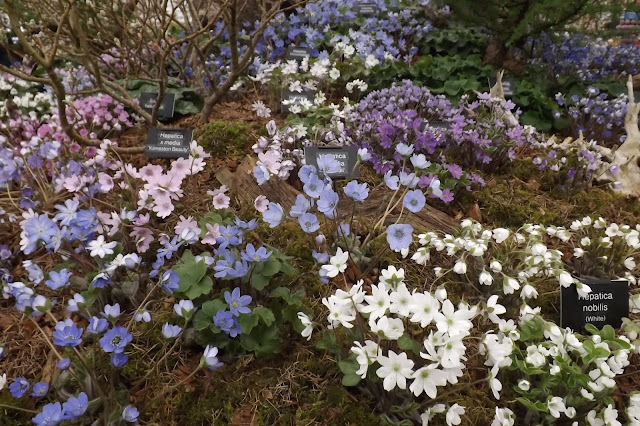 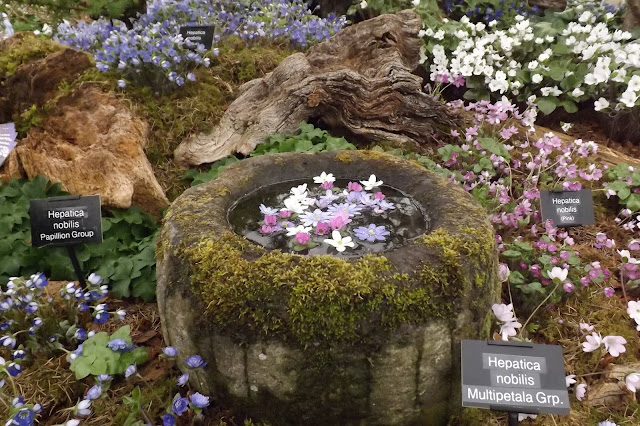 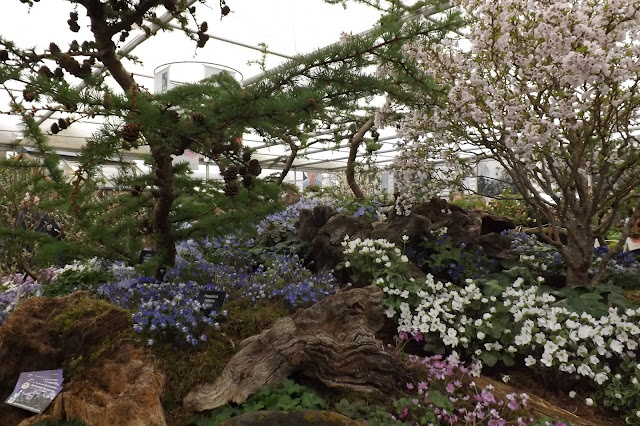 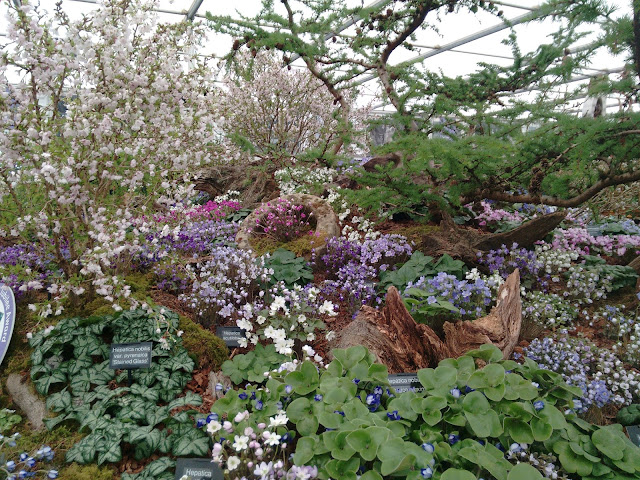 I don't think my photos do them justice really, the range of flowers and also interesting leaf shapes and foliage markings. Ah I could go on and on about this stand. Just gorgeous. I really must visit this nursery. Anyone else go to Chelsea? Or saw the coverage, what are your thoughts on the displays and plants in the Great Pavilion?