Slowly getting back to things

Thanks to you all for the lovely comments on my last post, still get emotional reading it and I miss my mum so much. But its a bit like how I felt after my dad died, when you lose someone it makes you cherish your own life and want to make the most of every day. Autumn is starting to creep up on us, the nights are drawing in slowly and its darker in the mornings, its a bit cooler in the evenings and there is a lovely light to the days. Some people get sad about autumn and the slow march into winter, but there is something about autumn that also feels positive, there is the abundance of crops the feeling of harvest festival time. I love the colours, the rich reds and yellows of sunflowers, rudbeckias and eupatoriums, the purple heather on the moors, the black shine of the blackberries and the spiky punks of my plot, the globe artichokes. As ever are covered in bees. 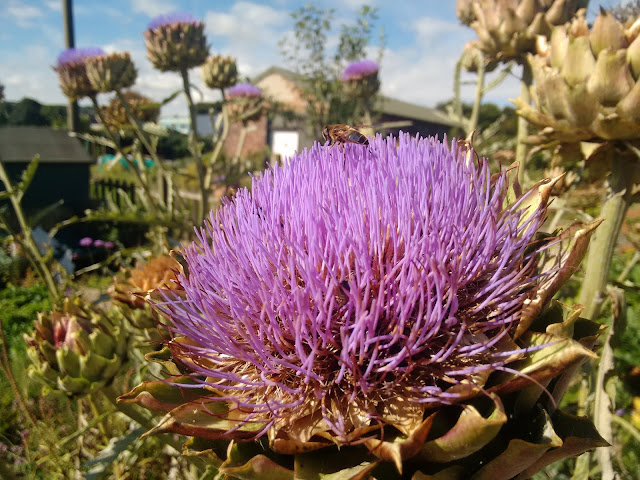 There is the planning ahead to next season with all the bulb planting and some seed sowing. I've already started thinking about where things are going to go on my plot next year. Sometimes spring can get a bit frenetic and I prefer the calmer time of autumn.
I can't say my allotment has been a huge success this year, I've just not had the time to dedicate to it like I usually do and it really makes you realise how quickly you can lose control of planting, harvesting and weeding. For the first time ever it became a bit of a chore and got me a bit stressed at not being able to get on top of things but then I just thought, let it go for a year, it won't come to any harm and do a bit at a time, its not the end of the world if your sweet peas go to seed, if the slugs eat all your celeriac or if you have a few weeds. Then I just popped up there when I could to get some fresh air and away from it all. 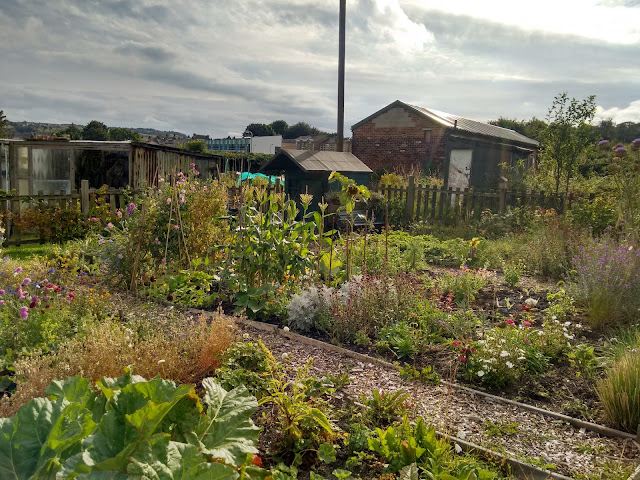 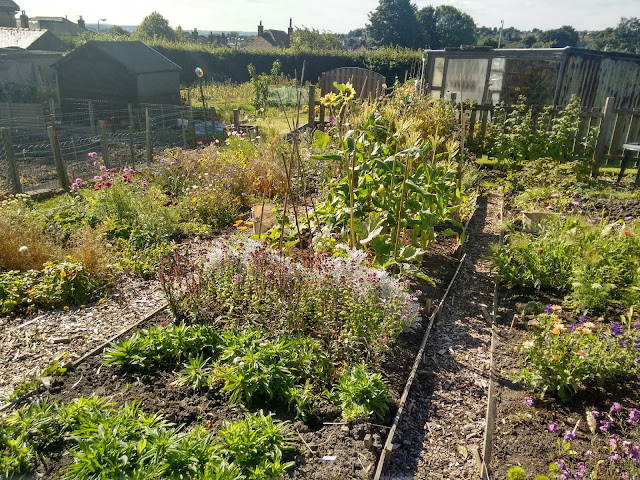 My cut flower patch has been reasonably productive but there have been some failures, only one sunflower survived the slug onslaught this year. One of my allotment neighbours said how much she missed the sunflowers that I usually have on my plot. The Ammi visnaga which was such a great success and not touched by the slugs at all last year was ravaged by them this year. I managed to rescue a couple of plants. The Zinnia have been disappointing. There have been some failures I think as I wasn't able to water as often as I'd have like too. A few things flopped too early on and never really recovered. My sweet peas were fantastic and started flowering early but then I just couldn't keep on top of them and so they started setting seed and that was the end of them. Actually I've done quite well for collecting seed, one up side for not being able to pick as often as I'd have like! There were some successes though with some lovely Scabious. I'm starting to get a real feel for the good old stalwarts of the cut flower patch, the reliable plants whatever the season can throw at them. I'm starting to assess what I've grown and thinking about whether they get added to my list this year! 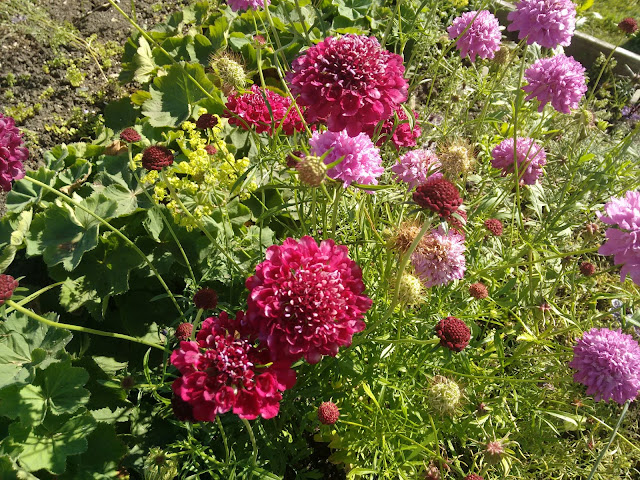 On the veg side of things, I managed a good crop of onions and potatoes, I'd completely forgotten that I'd planted 'Arran Victory' a vibrant purple skinned potato, so that was a surprise when I came to dig them up! A good spud for mash. Courgettes have been a disaster, the plants grew well but the slugs just kept eating the flowers and so hardly any crops off those. I planted all my celeriac and celery and when I next returned to the plot the bed was completely bare, not a single plant. So frustrating for a crop that you start so early and cosset through. Yes slugs have been a big problem for me, I just haven't been able to really stamp them out this year. The rain we had early on was perfect conditions for them, not weeding as much also means more slugs I think too. I've also realised that I've created lovely slug and snail hotels on my plot. Most of my veg beds are divided by rows of chives and I think this is where the critters go to shelter in the day. I've got rid of a load when I've cut back the chives hard recently. May need to rethink that, but I do love them, they are a good early flower for bees on my plot. I've managed to salvage a few things more recently, I have some crops growing for winter, I've some good parsnip plants, some leeks and have got some sprouts and greens for later.
Another negative aspect to this summer has been a thief on our site, we have had our communal shed broken into and the shop money stolen. But more frustrating for some people we have a thief who is going round the plots and pinching crops. Just a few bits of things, some peas, some courgettes, onions, potatoes and a whole cucumber plant. I didn't think I'd been affected but with only having a couple of squash on my plants this year, I couldn't fail to notice when one went missing. Its almost as if someone is selecting stuff to have for his (or her) tea!! It just causes a bit of bad feeling as its likely someone on the site.
On a more positive note, I'm pleased to announce I have some lodgers on my plot now, some residents in my bug house. 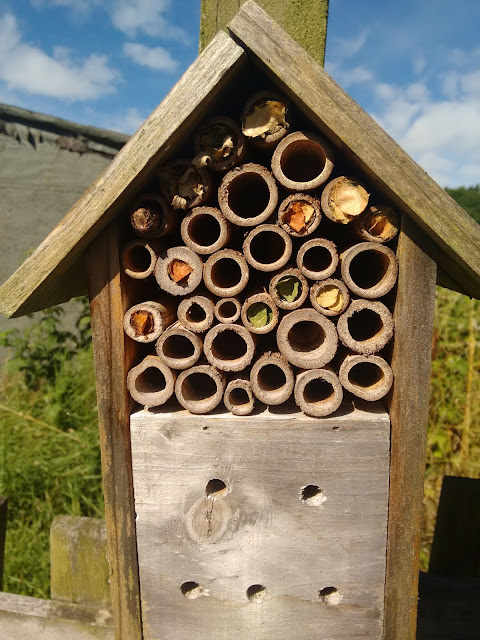 Anyway, just a quick update on my plot, I'm doing a bit of clearing and reorganisation of things this year. Planning on even more flowers for next year!
I've made a couple of garden visits recently which I'll try and blog about soon, a return visit to one of my favourite gardens and nurseries, Dove Cottage in Halifax, always a delight to see the everchanging plant combinations that they try out each year. Then last week I made a much anticipated visit to Trentham gardens near Stoke-on-Trent, I've see lots of photos on Twitter of the newly planted meadows there, designed by one of my gardening heros, Nigel Dunnett. Anyway more on that in a later post.
Enjoy your garden xx