Goodbye to my gardening companion

I lost my gardening companion this week, my beautiful, funny, affectionate cat Bob. 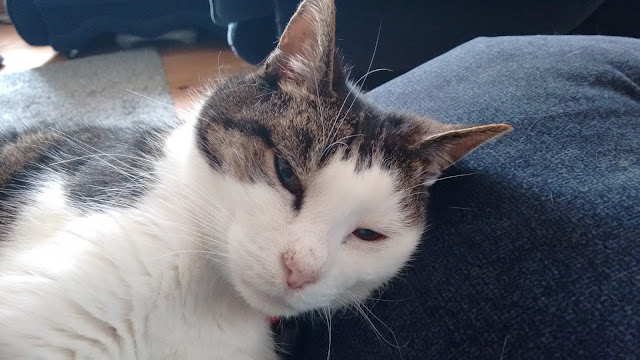 He's been a constant in my life for the last 16 years, there to keep an eye on me and bring me joy. I got him in 2001 from Dove Holes cat sanctuary near Buxton when I used to live in Disley. A small male tabby and white cat, they weren't sure of his age but thought he was probably about 1 year old. He was a small cat and always stayed small for a male cat but he could look after himself!! He was certainly very protective of his territory and did get involved in the odd fight and despite his size often won. I hated hearing that sound of cats preparing for a fight outside my bedroom window and often had to go down and out to split them up and move them on. I remember once being woken up in the middle of the night by two cats fighting outside the bedroom window and rushing down in my dressing gown. Then once outside realising that it was not Bob and coming in to find him cuddled up on his chair in the lounge wondering what all the fuss was about!!
In my first house he liked to look out over the garden. Can you spot him on the window ledge? Must have had a head for heights then. 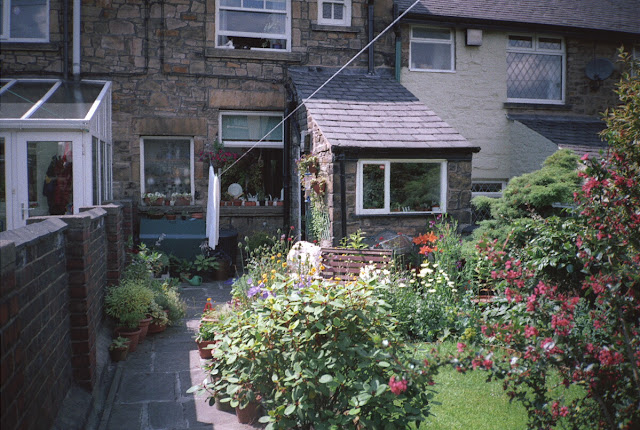 In 2006 I split from my husband and moved to Huddersfield, living on my own for the first time was hard but he was there with me, keeping me company and more importantly cheerful. Happily for me a couple of  years later, Martin came into my life and Bob had a new friend. He was such a friendly cat, very much wanting to be around us. He was very fair with his affections sitting on my knee for a bit then moving onto Martin, spreading his love. If we were in the house he was invariably with us and if I was in the garden he'd always come and find me and sit close by. Though often that was because he was waiting for his tea! My favourite thing in the summer was to get the rug out on the lawn and lay in the sun with Bob snuggling me by my side. He loved being outside in the sunshine. Here he had the whole lawn to sit on but the comfiest spot was my kneeler. 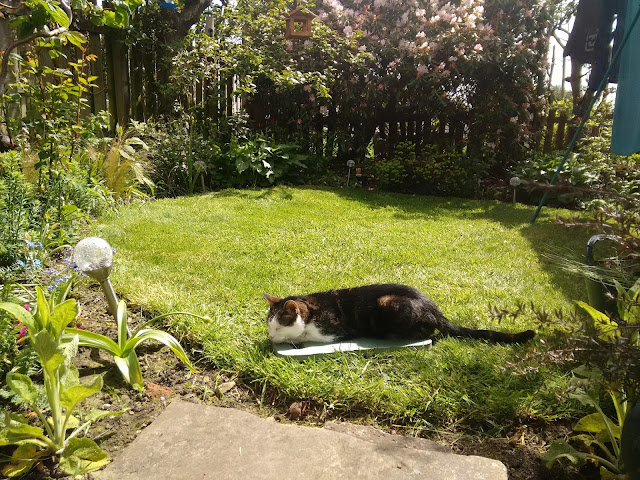 In the summer when he was younger one of his favourite spots was on top of the wheelie bin, when it was being warmed by the sun. 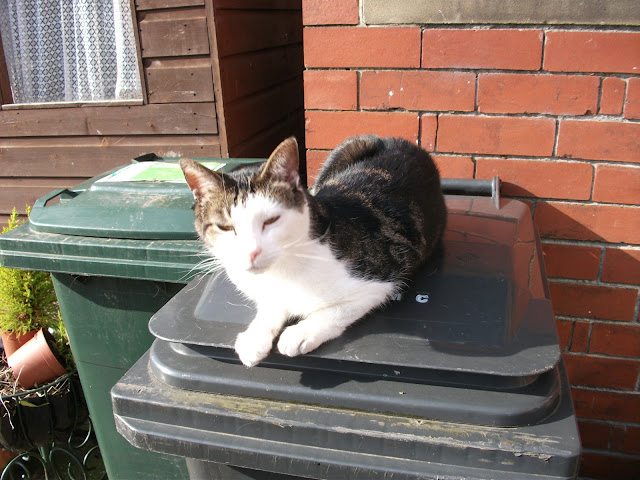 Which was an easy jump onto the shed. 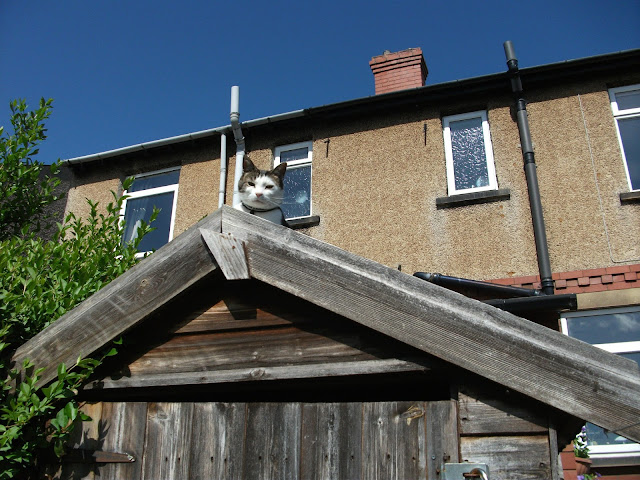 Over his life he's had many favourite seating places, some weirder than others. In the wardrobe, on the wardrobe. 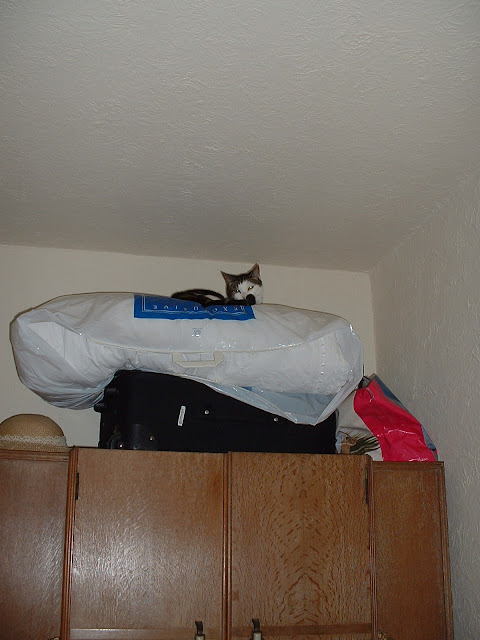 In the bedding chest. 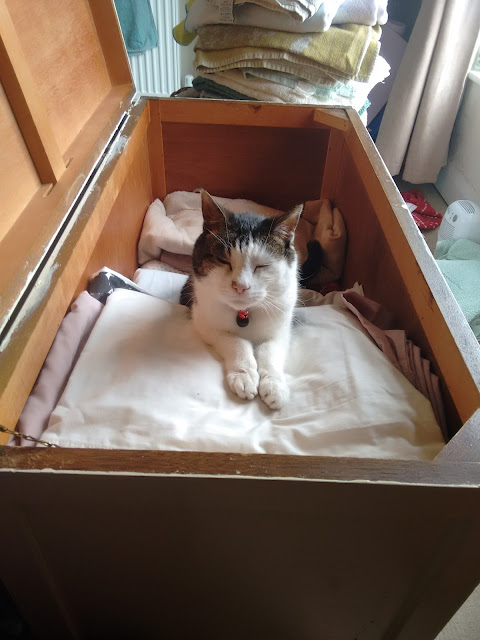 Under the desk on the computer. On top of the desk when I was trying to work. 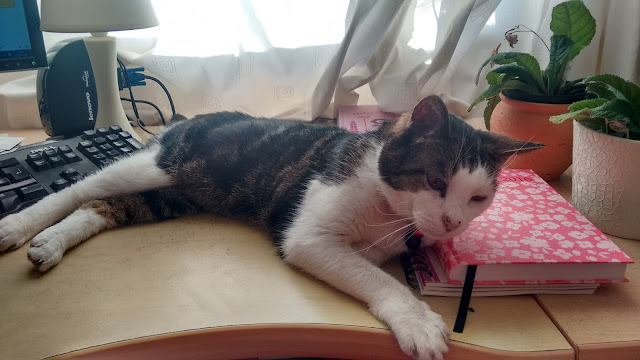 Last summer when it was hot he went through a phase of sleeping on the mat near the front door. 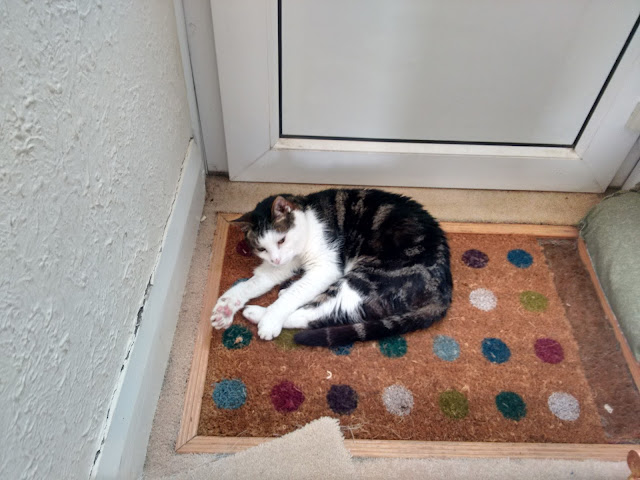 But we had visions of him getting squashed by the post coming in the door so put some things there to try and stop him. This is what he thought of that... 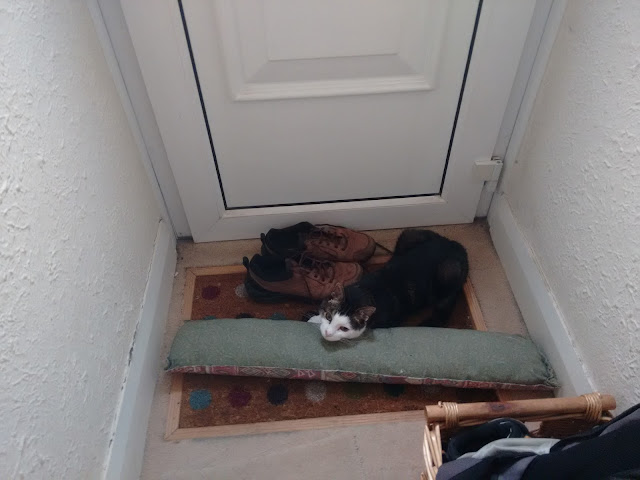 But his two favourite places were on the back of the chair in the lounge where he could get the evening sun and watch the world go by, when he could be bothered. 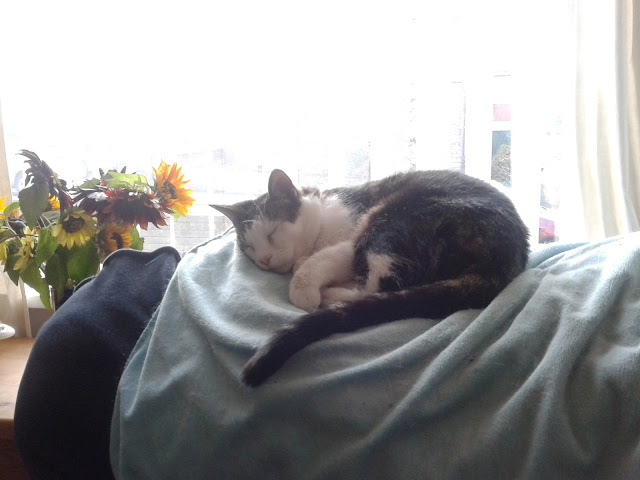 Or at the back bedroom window in the morning looking out over his domain. 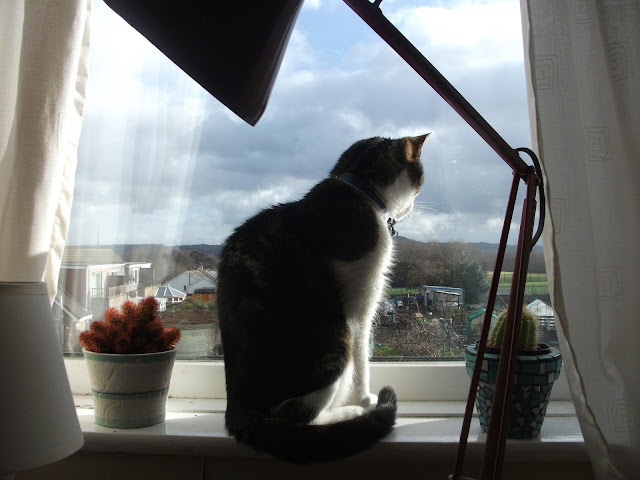 He loved going out in the garden but didn't like it when it snowed. 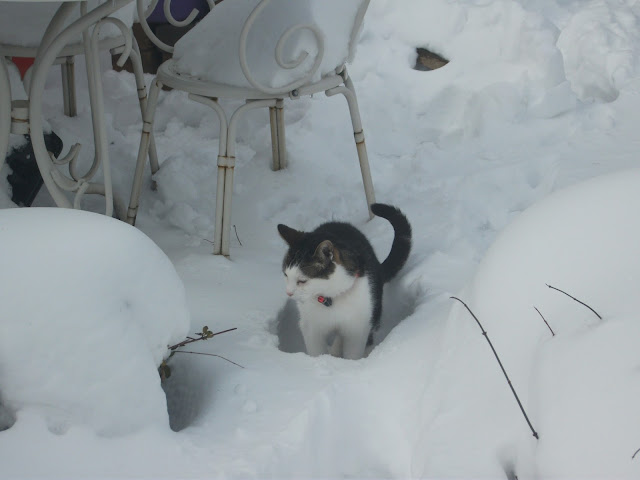 He was very "helpful" for me around the garden. Helping me chose seeds. 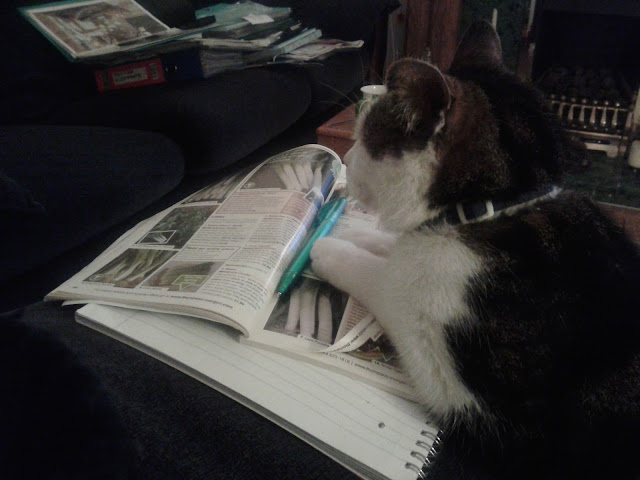 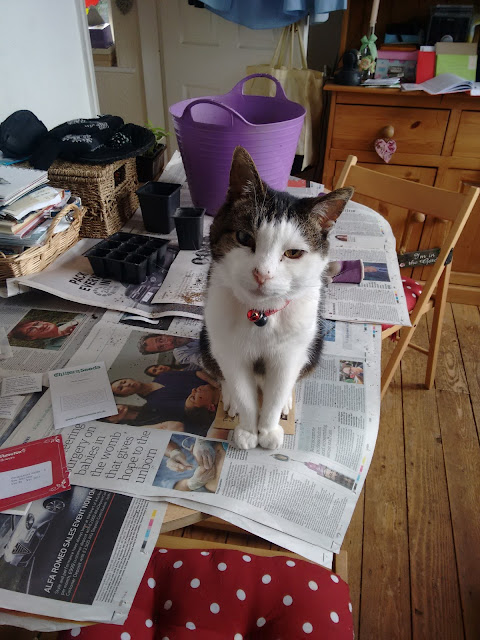 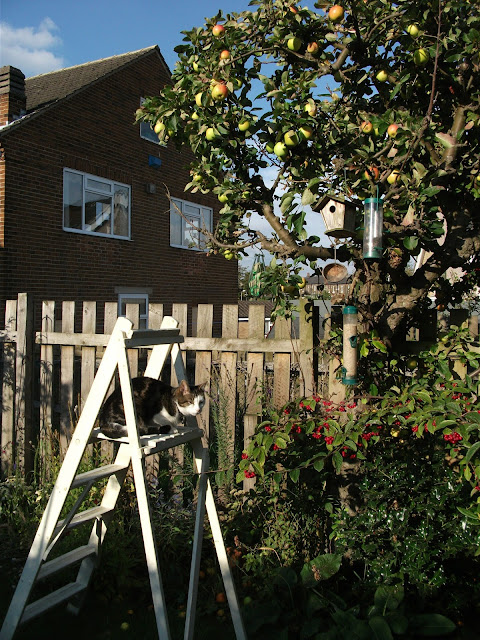 Warming the soil in my pots 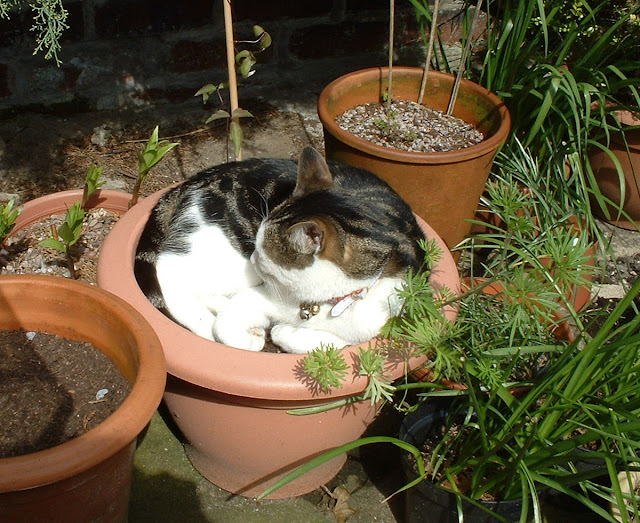 Then when it all got too much he'd flop on the steps in the sun. 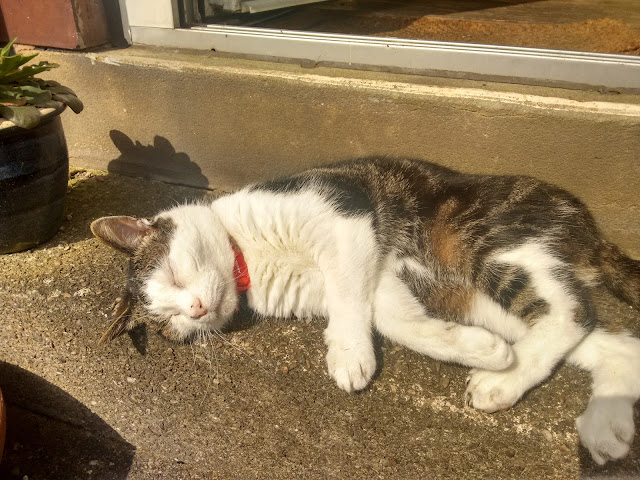 In his younger days he was a bit of a hunter which was a real challenge for me being a bird lover. When I lived in Disley, its semi-rural location meant that I had quite a mixture of presents laid at the door. Lots of mice, one rat which was a bit grim, shrews, voles and sadly two moles. One mole was left almost perfect on the bedroom floor, I don't think they taste nice! Sometimes I managed to save the creatures and many a time I've been searching for mice that had escaped and which had sort refuge under the dresser or the bed. One time I was searching for ages for a mouse that had escaped Bob and raced off the bed. I had the whole bedroom upside down and then found it in a bag that was hanging from the bedpost. Easy to carry it out to safety. It was the birds that I hated him bringing in, not too many luckily, mostly sparrows and the odd bluetit but one time when my mum and dad were visiting he bought in a dove. It was flying round the lounge and in trying to catch it, it flew out of my hand leaving its tail feathers behind. I did manage to get it out safely though. We got him collars with bells on but he was too good a hunter it didn't really stop him. He was also always losing his collars, fighting with other cats most often. But as he got older there was less and less thank goodness.
Doing his best lion pose. 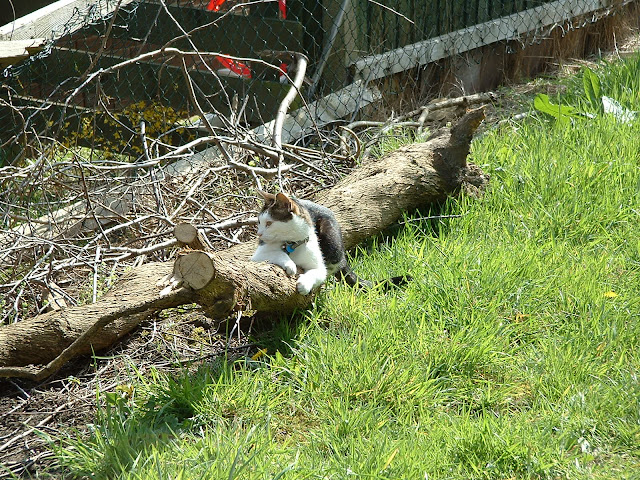 He loved catnip and used to go into wild ecstasy whenever I bought any home. I wanted to grow some Catmint in the garden and tried it many times but it never survived beyond a week with Bob nibbling it. For the last few years my friend has knitted him a catnip toy for Christmas and wrapped it in tissue paper. It was always a treat on Christmas day to see him rip open and go mad over this smell. 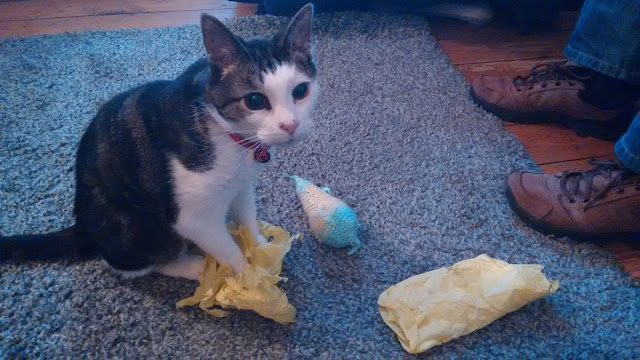 The last few years he has slowed down and slept a lot more. He became even more affectionate, coming to sit with you all the time. A constant presence whether he was asleep or stalking you round the house waiting to be fed. He also became more vocal as the years went on. He'd always meiow for his tea and also made a very strange gargling noise when he had bought something in. This noise he developed as he got older and more recently when he came in he would make that noise to catch our attention. I think that was partly because he started losing his hearing and sight, which must have been hard from him, and needed to know where we were. Usually when I came in from work I would hear a thud from upstairs as he heard me and came down for his tea but recently I've had to go right up to him to wake him and for him to realise that I was there. He had slowly got more frail and unsteady on his feet. We had to lift him down from where he had jumped up and he went upstairs less and less. Sadly last week he started to have what we think were mini-strokes and could hardly walk, he recovered a couple of times and we though they were transient episodes but it became clear that these were happening too frequently and finally made the decision that it was kinder for him to be put down. But how hard that was. I do know though that he had a good life and gave back to me and Martin so much love, we are both heartbroken. He will be greatly missed, he was part of our family. The house now is oh so quiet. 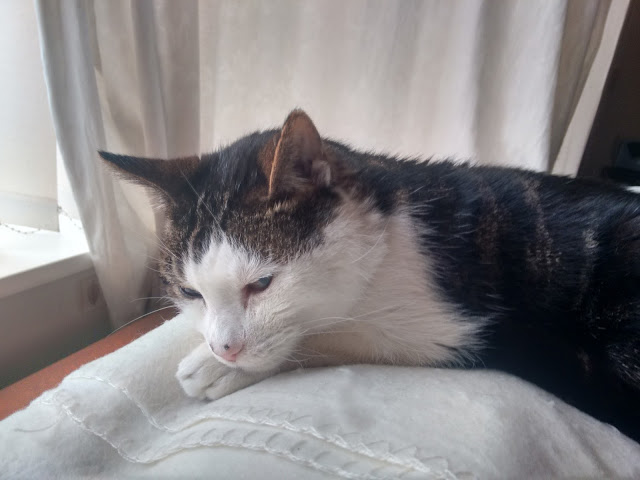