Its official, last month was the UK's warmest April on record, according to the Met Office. Records show that much of the UK experienced temperatures 3 to 5C warmer than is normal for April. It was also the 11th driest month, with on average half the usual rainfall.
This has its advantages in that there hasn't so far been a problem with slugs and snails but its disadvantages in that having to do a lot of extra watering which is taking up my digging time, plus the ground is rock hard now! The person who had the allotment before me left a good hosepipe at the allotment but I've not been able to use it due to not having the correct connector for the tap.The tap has a thread at the end and the two connectors I've bought have both been too big. I chatted to the chap who has the allotment next to mine and he has one but he wasn't sure where he got it from. But today I have been at the plot and the chap on the other plot lent me his (he had a whole box full of adaptors that he bought which didn't fit!) and I managed to water at last, it was much quicker with the hose. Though I was a bit cautious and didn't water my spuds as there may be a touch of frost tonight. I just covered the newly emerging leaves with some more soil to protect them. I love how everyone is so friendly and helpful though.
So my spuds are starting to emerge. 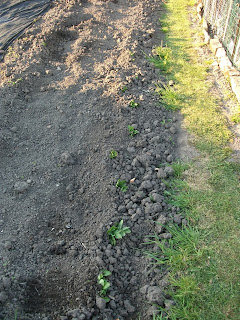 I've got lots of flowers on my strawberry plants. 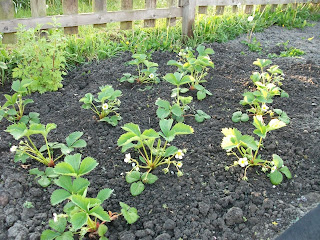 Also there are now flowers on by broad beans, which have been a bit nibbled by pea and bean weevil but I think they are growing well enough now to cope with that. The peas are starting to grow up their supports. 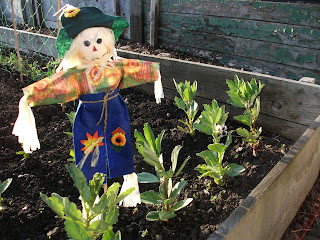 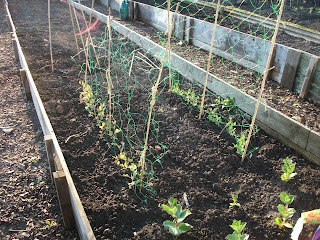 Plus have got some radishes coming up now which I sowed in rows. 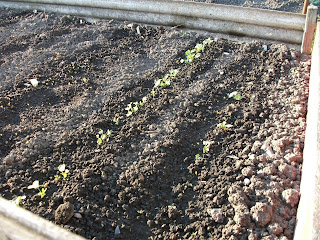 Today I also sowed some Spring onions 'White Lisbon' and 'Deep Purple'.
It has been really windy the last few days and this has kept it cool, it looks like there is rain forecast maybe for the end of the week but we'll see.
Posted by Annie_H at 22:17