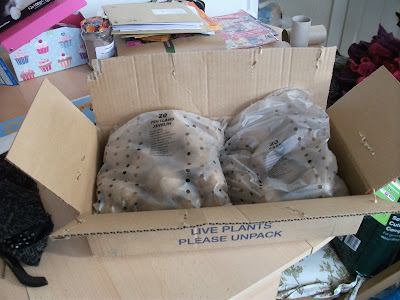 I've gone for 'Pentland Javelin' which is a first early variety. It has white skin and flesh, with a waxy texture. Then also 'Cara' which is a Main Crop variety. It is white with pink eyes and considered to be a very robust variety. Good for jacket potatoes.
I think I'll also put in a few 'Pink Fir Apple' potatoes which are a bit unusual looking but taste great.

Last year I grew three varieties 'Charlotte', Vales Emerald' and 'Pink Fir Apple' and whilst I had a good healthy crop from the 'Vales Emerald' they were a bit floury in texture for me. Everyone will have different preferences for potatoes, but I definitely prefer mine more waxy than floury. I'm still trying out varieties each year to find which I like best and which grows best on my plot.
This is the time of year when you get articles in gardening magazines about the pros and cons of chitting. To chit or not to chit, that is the question! Most people seem to think it is an advantage and I have always done it. It basically just encourages the potatoes to produce shoots, and encourage them into growth quicker when you plant them in the ground. I'm going to start them chitting in a cool, frost-free but bright place. They need to be in the light or they will produce the long white spindly shoots that you get when you forget about your potatoes and find them weeks later in your cupboard! In the light they will produce smaller, dark green shoots. The advice is to start chitting in warmer parts of the country from late January or in February in cooler parts, but about six weeks before you intend to plant out the potatoes. Can you chit for too long!? I planted mine last year at the end of March beginning of April, but I guess it all depends on where you live and the spring weather conditions. We did have a frost here quite late in the spring and the tops of my potatoes were damaged a bit but it didn't seem to affect the crop. I plan to plant them in the part of my plot that didn't get too much attention last year. Potatoes are know to be a good 'cleaning crop' for allotments as they break up the soil and the foliage grows fast and thick and can help smother some weeds. I will give the site a weed, add some garden compost and give a fork over before I plant them but that will be all.
I still find the digging up of your first potatoes of the year is one of the most exciting parts of the veg growers year and the first spuds always seem the tastiest. Apparently the heaviest potato was grown by Peter Glazebrook and weighed 11lb (4.99kg) (http://www.bbc.co.uk/news/uk-england-nottinghamshire-14934269), thats heavier than my cat! Don't think I'll be trying to break that record, small and sweet for me.
Posted by Annie_H at 17:45

Email ThisBlogThis!Share to TwitterShare to FacebookShare to Pinterest
Labels: potatoes