The thaw is on.

Lets hope so anyway. I'm ready for the snow to go now, we've had snow on the ground here for 12 days and whilst it looks pretty I want to see my garden properly again. I've been out this morning to top up the bird feeders, trying to entice the birds for the RSPB Garden Birdwatch which I'm going to do tomorrow, and you can just hear a constant drip, drip, drip. 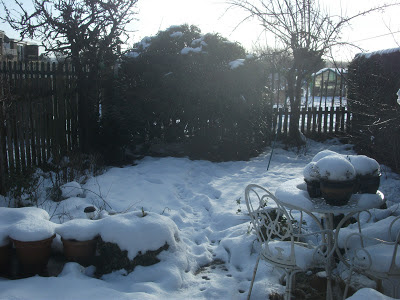 The pots with my tulips in all still have their snow hats. 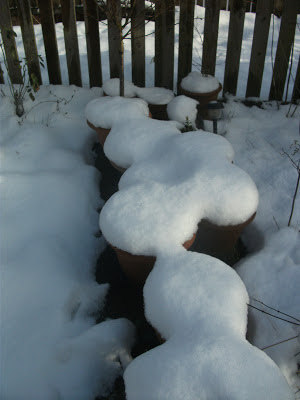 At least the sun is out. We had a top up of snow last night but I think its due to disappear soon and I think rain is forecast for later tonight. I feel for all the people at risk of yet more floods.
Bob will be happy when it has gone, but he's basking in the sun on the windowsill next to me while I write. He sits on there until even he gets too hot and then comes and sits on my knee which makes writing difficult! 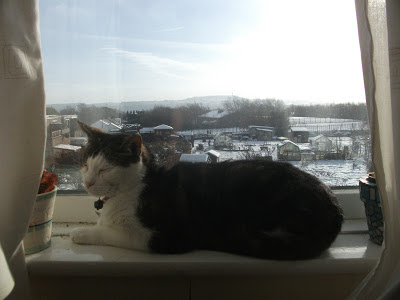 The view from the window here can be a bit distracting, out onto the allotment at the back and on towards Castle Hill. 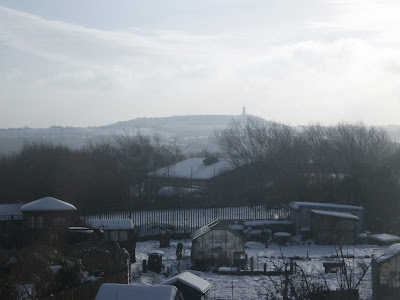 My seed order arrived from Sarah Raven this week, a package of promise for a colourful summer ahead. I didn't actually need too many vegetable seeds this year so I've just ordered a few new varieties to try but I want to try and grow more flowers for cutting this year so I've been seduced by all the gorgeous photos in Sarah's catalogue and order some flower seeds.
So I'm going to try a few that I've grown before like 'Black Ball' Cornflowers, sunflowers (I'm trying the wine-coloured 'Claret', some white Larkspur, Verbena bonariensis (which used to self-seed in the garden but the recent cold winters here have put paid to that) and a mix of Sweet Peas called 'Amethyst', more Jewel colours. Then a few that I've not tried before like Tithonia rotundifolia, which Monty Don always raves about and is a star of his Jewel Garden, Orlaya grandiflora, Salvia viridis (Blue Clary), Malope 'Vulcan', Dahlia 'Bishops Children', Echium 'Blue bedder' and a flower with the gorgeous name of the Blue Lace flower, Didicus, which has pale blue scented umbels. Bliss.
Finally, I thought I would post a picture of the Amaryllis which I got for christmas, I potted it up on the 9th January, It had been in a box and had obviously started growing in there which was a bit of a problem as it was growing sideways! 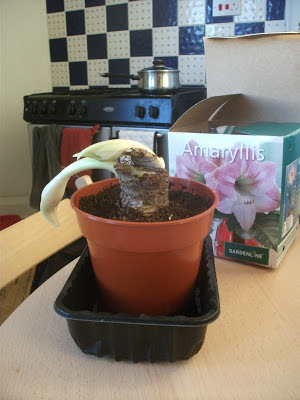 It has straightened up a bit but the stalk hasn't grown very high before it has started flowering. Oh well, the flower is beautiful though. The variety is 'Apple Blossom' and it is white with a delicate pink centre. 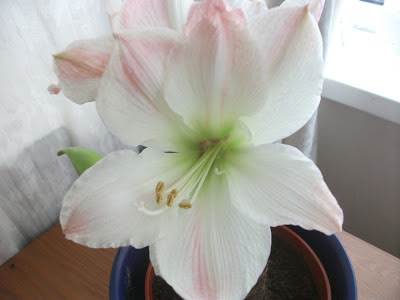 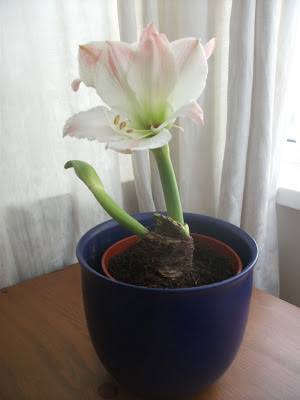