My biggest excitement this last week or so has been the discovery that we seem to have a couple of hedgehogs residing in, or very close to, our garden. Martin made the discovery while I was away, I'd just been speaking to him on the phone where he'd been sat in the garden at dusk, then he sent me this photo. 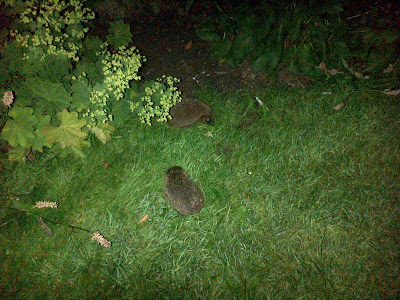 Two hedgehogs wandering round the garden, I was very jealous of Martin seeing them, its been years since I've seen one, they really seem to have been struggling. Martin said that he was a bit worried at first, all he could hear was a loud snuffling and rustling in the bushes at the bottom of the garden. He didn't know what was going to pop out. But what a treat.
Obviously with this gorgeous weather I've been making the most of being in the garden and on Saturday night around 10pm as it was going dark. I was sat at my table with a beer and my feet up on a chair, when I heard some rustling near the shed, I kept very quiet and out popped a hedgehog. I have a large tray which I fill with water to water my trays and pots from below and this nearly always has some water in it and the hedgehog went straight for that. It then carried on oblivious to me sniffing around and under my chair, unfortunately then I moved to see where it had gone to and the security light came on and it scuttled off down the path onto the grass. Its lovely to watch but I don't want to scare them off. I'm not certain but they could be living under the shed, they seem to come out from there, though our garden could just be on their evening circuit, I've read that they do visit many gardens and can cover quite a distance each night. I've now seen them most nights, they come just as its going dusk.
I've just looked on the Hedgehog Preservation society website and they are recommending that everyone should leave water out for our prickly friends in this dry weather. Maybe thats why my garden is so attractive to them (and the slugs). There is some advice on encouraging hedgehogs to stay in your garden and that is to make sure there is water and to feed them with meaty dog food?! I've put out some of Bob's dried cat food, the first night I put it out the hedgehog went straight for it and was crunching away, so I've been putting a little bit out each night. I worry a little bit about doing this as you don't want them to depend on it but reading on the website it suggests that it will just help supplement their diet.
I think my slovenly garden habits may also be good here as there are lots of overgrown bits in my garden, leaves piled up near the shed and watering at night may encourage slugs, so I think I'm helping them a bit there.
So honoured that they want to visit my garden and happy for them to keep visiting and eat as many slugs as they'd like.