The plot in January

It has been an up and down week this week weather-wise. I was off on Monday and spent a couple of hours at my allotment on a very mild day and the week is coming to an end with snow showers and biting cold winds. I've not been to the plot too many times in January, its been far too wet, but finally we had a dry day and I managed to get a few jobs done. I cleared most of my last few crops that are in the beds, the last of the celeriac, parsnips, sprouts, leeks and cabbages. All that's left now is some kale and chard, though they are both looking a bit worse for wear now so they'll probably get harvested and then composted next time. The garlic is peeking up out of the soil now which is a good sign and though the overwintering onions are a bit battered they will soon grow on well again as soon as the weather warms up. With most of the remaining crops cleared I can now finish the spreading of compost and manure as needed so all the beds are then ready for the new seasons planting. Not much more to do as I did most beds before Christmas.

I've cut the autumn fruiting raspberry canes down to ground level, they'll send up new canes which will flower in the late summer and will fruit in the autumn next year. I'll give these a mulch soon too. Here underneath and around the raspberries I planted some Snake's head fritillary bulbs in the autumn but there is no sign of them yet. This area is right at the bottom of a minor slope on my plot and with all the rain that we have had, this is the wettest part of the plot. I thought these plants would like it here, knowing that they like a moist soil and naturalise in wet meadows but we will see. I'll keep an eye out over the next few weeks.
I came home with laden bags and I then spent a relaxing couple of hours in the kitchen cleaning and chopping, preparing the veg mostly for freezing, though saved some for cooking this week. I've discovered a great recipe for braised red cabbage, who knew red cabbage could taste so good! 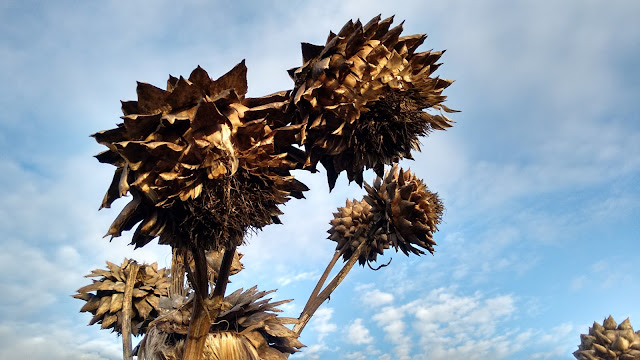 I've already started my seed sowing for 2016, only a few things but have sowed another batch of sweet peas and these have been put on my propagator in the back bedroom, as soon as they are all germinated they will go back out into the greenhouse, but I get better success using some bottom heat with the sweet pea seeds. So they get first place on the propagator and then quickly moved on leaving the space for other things. I've also sowed some chillis and they are starting to germinate now. Its important not to get too carried away with seed sowing yet (easier said than done I know!), but there are a few things that can be started now. Chilli plants need a long growing season and they can be slow to germinate, so its good to get them started soon and grown on. Other crops you might want to get started soon are celeriac, summer brassicas, early lettuces and salad leaves like rocket and mizuna which prefer a cooler growing season. I'm also going to start a sowing of some hardy annuals soon too to try and get some earlier flowers. You could also sow some Broad beans undercover to get an earlier crop.

In the greenhouse, I've been overwintering some hardy annuals which I sowed in the autumn, I've never done this before and its been an interesting experiment. I've some Sweet pea plants which are looking robust and healthy. One surprise has been the toughness of the Larkspurs, I've struggled getting these to germinate in the spring in previous years so was pleasantly surprised to get such a good number of seedlings from an autumn sowing. These have then been pricked out and have grown on slowly but steadily and have now made nice little plants. I've got some of a Stock flowered Mix which have done really well and also pricked out some Consolida regalis 'Blue Cloud' and 'Snowcloud' which I'm very excited about. These are new to me this year and apparently grow quite differently to the usual Larkspur which have spikes of flowers, so these grow more bushy and have a more airy habit. The seeds were from Chiltern Seeds. I've also got some small plants of Ammi majus which I'm hoping will grow better from an autumn sowing. I've recently pricked out some Ammi visnaga but this seems to be struggling in the cold of my unheated greenhouse, will see how many get through. I've also got some Orlaya grandiflora seedlings, some varieties of Scabious, Echium 'Blue Bedder' and a Poppy called 'Falling in Love'. I think this will be trial and error for a few years as I get to grips with my greenhouse growing. Think the trick is to get the seedlings to a reasonable size before over-wintering. So I maybe need to sow a bit earlier than I did last year. So things are getting going both for veg and flowers. 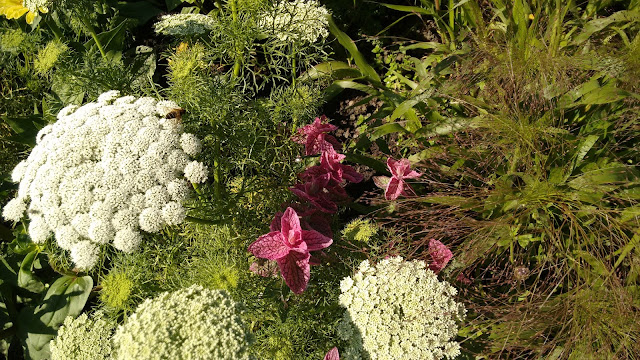 This afternoon I've spent a pleasant hour gazing out of my back bedroom window watching my resident birdlife go by. All in aid of the Big Garden Birdwatch and the way the weather has been this afternoon I'm surprised I saw anything. A squally day, with the wind blowing along lots of mini hail showers and then the sun showing its face every now and again. I have a great view out of my window here of the garden, out over the allotments behind my garden, out further to the field where people walk past with their dogs hunched against the bleak weather and then even further out to the hills surrounding Huddersfield. I can see the iconic building of Castle Hill straight ahead and then to the left is the tall spike of Emley Moor mast. You know when the weather has particularly come down bad when these disappear from view, as the cloud enfolds them and the rain, hail or snow comes down. Today the hail is blown along in gusts changing direction forming patterns across the view. So far its not sticking but may do later if the weather gets colder overnight.

This morning, as I do couple of times a week at the moment, I went out to top up the feeders with peanuts, sunflower seeds, fatballs and a few mealworms. I topped up the water too. The feeders are placed along various branches of an old apple tree at the bottom of my garden. Along side it is a large rhododendron which provides good cover for the birds before they fly out onto the feeders. 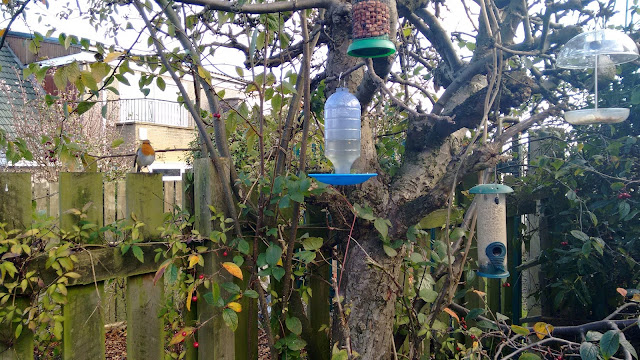 I didn't see the Robin today but this is usually what happens when I go out to fill the feeders, I get a visit by a little Robin, who gets first dibs at the fresh food. Today I had my usual flock of Sparrows, hard to count but I think I had 10 at any one time. They seem to be doing OK round here, and fly together around the area, calling in at different feeders. You can definitely hear them when they are roosting in a tree or bush, tweeting away. I saw some blue tits and a coal tit. 2 blackbirds which like to catch the bits that drop from the feeders and forage around under the Rhododendron. I also saw 2 magpies, who when they are around tend to prevent anything else from feeding and really quickly peck the fatballs to bits so I try to discourage them, but they have to feed too. But so cold and windy today was glad to see the birds that I did. The Big Garden Birdwatch can be done anytime over this weekend, so get going and see what you see.