The plot in February

Ok so I'm running a bit late with this post, though to be fair there is not much to talk about on my plot. Its been a quiet month gardening-wise for me, it was still too wet at the start of the month to do anything. I've only actually been a few times to the plot and on one of those the wind was so biting that I just checked everything and then just headed home to the warmth. But miraculously towards the end of the month we have a some runs of dry days, how exciting is that. We have had some lovely sunny days here though it has been cold with frosts at night. Plus the nights and mornings are getting lighter, spring seems to be on the way. However, I'm looking out of my window now its snowing heavily, we've even had some thunder and lightning today, so spring is on hold for a couple of days. After the really mild days early on in the year where plants were going a bit crazy and flowering madly, we've had some cold here and things seemed to have settled a bit and I think getting back to normal flowering times again.
Here's an example of a crazy combination. I still have some bedding plants left over in a pot and they have continued weakly flowering over the winter, so I had a little vase of my first snowdrops and osteospermum!! 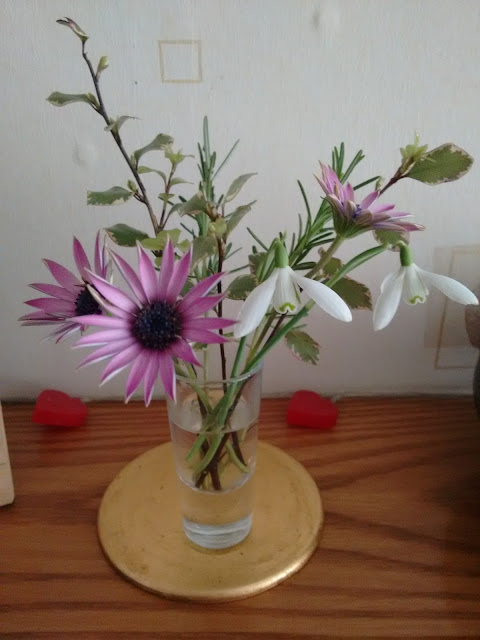 At the allotment, I've also finished top dressing the beds and all looks calm and still. There is some greenery from chives edging the beds and the rhubarb is growing well. 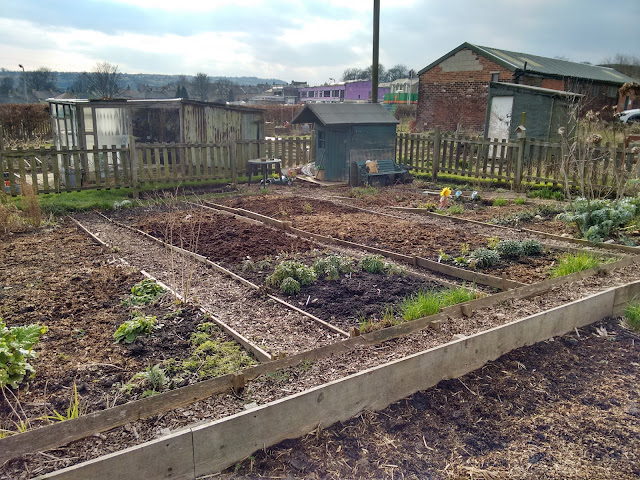 I spent a day pottering there on Friday, pruning the redcurrants and gooseberry bushes and mulching. I also mulched the raspberries and rhubarb plants. I dug up and composted the remaining Chard which was looking a bit worse for wear now after the frosts. I also cut down the green manure I have growing in a couple of beds. Garlic is sprouting well now, though the over-wintering onions look a bit tatty I hope with some sunshine they will perk up. So all poised and ready to go.
In the garden I've also been cutting down the remaining dead foliage on my perennials and I've pruned my few roses. By the way a great tip if you are nervous about pruning your roses. Go and visit a good rose garden at this time of year. Last monday Martin and I went to Dunham Massey, we go most winters to visit the winter garden but we also had a quick wander round the relatively new rose garden that they have there. There for all to see is a masterclass in pruning as they are just starting to sprout and you can see how the gardeners there have pruned mostly to outward facing buds to create an open shape. Not great photos but go and visit and see for yourself. 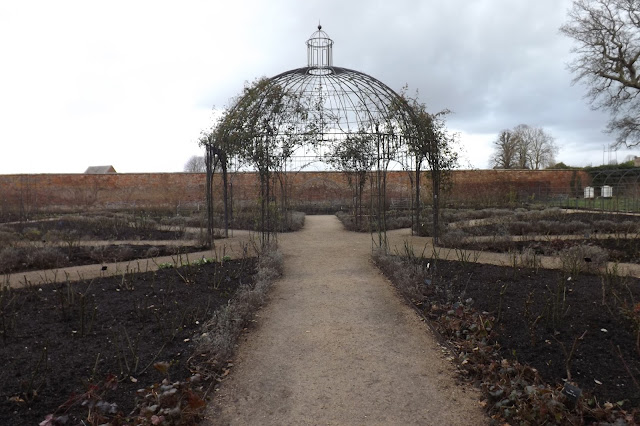 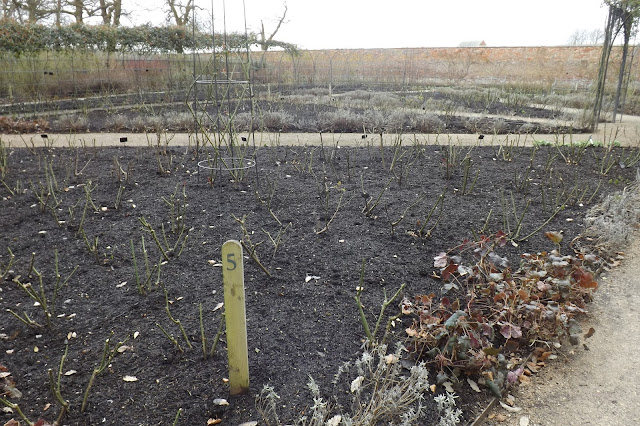 I know it looks a bit bleak now but this is it at its peak. 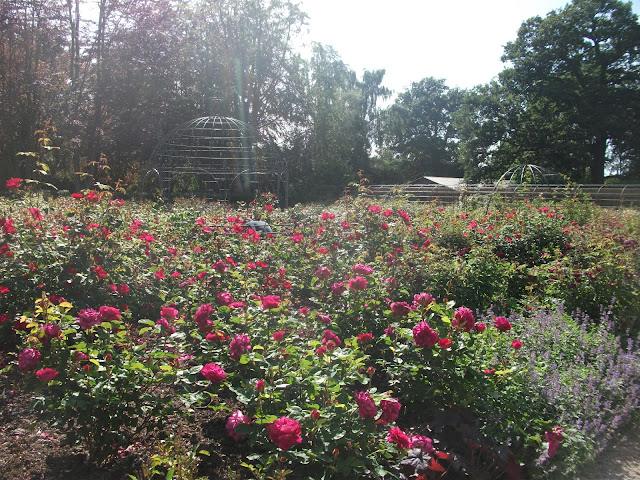 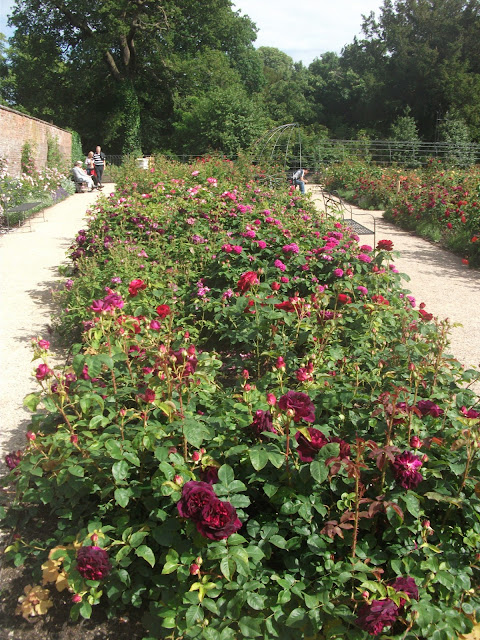 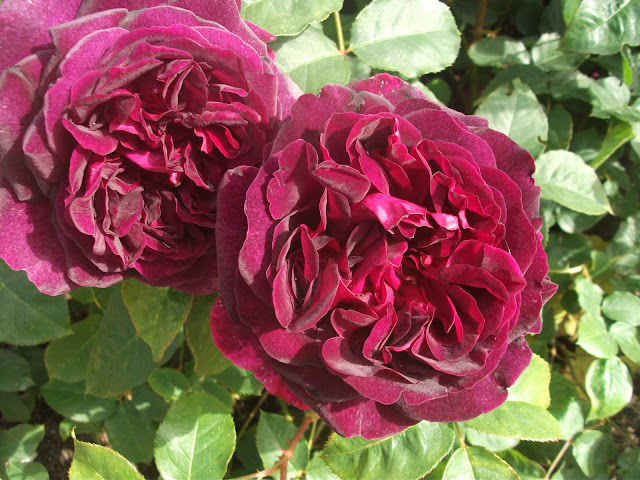 So far I've restrained myself from sowing too much, its still too cold. But I will get going soon. My chilli seedlings are coming on strong. In the greenhouse I've lost a few things due to damp and rot I think but its so hard getting the balance between keeping it warm but also keeping it well ventilated. Most days I'm out very early and it would be far to cold to open it then. Oh well my experiment in overwintering annuals was just that an experiment, some things have thrived, like the Larkspur and others like Ammi really not done well.
At home I've taken great pleasure from a lovely Amaryllis which I got for Christmas. Quite a subtle one. 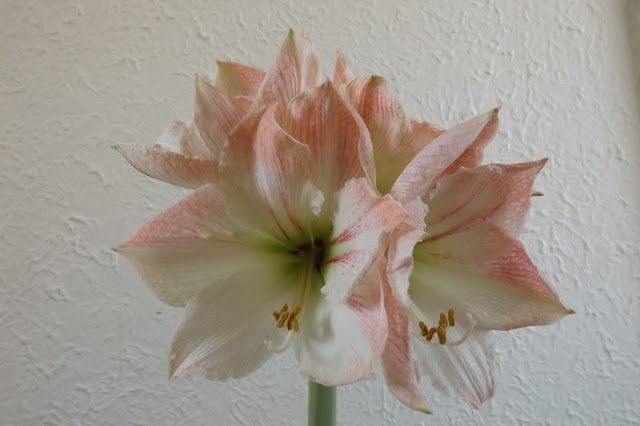